A couple of weeks ago H.I.’s  Room with a View post showed the Waverley Lofts’ view toward downtown Indy.  This article shares what happened on this site 100 years ago.  Waverley electric vehicles were built at and around139 South East Street in their time.

The first Waverley electric car was a two-passenger Stanhope with tiller steering, 36-inch wheels with pneumatic tires, and a single headlight.  Waverley exhibited five autos and one delivery wagon at the New York Auto Show in May 1899.  This line-up showed that its factory was manufacturing in quantities for a variety of needs.  All of the vehicles with the exception of one car were sold and delivered after the show. 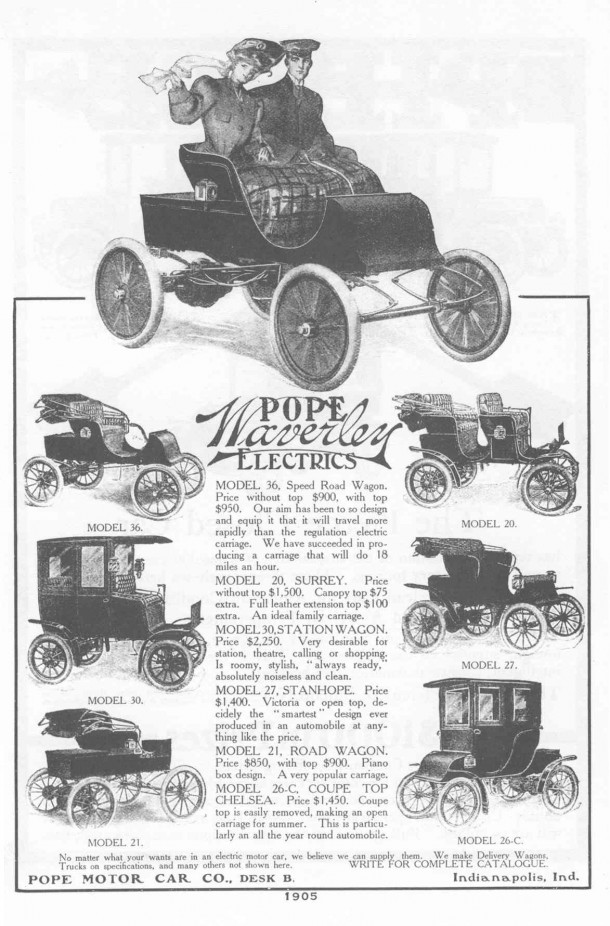 Waverley offered a number of other models like the piano box runabout and an open road wagon.  About 2,000 vehicles were sold by 1903.  Waverley then built the first coupe body ever constructed for an electric vehicle.  The popularity of this type of closed car was so great that all the electric manufacturers soon devoted their attention to closed passenger cars.  The demand for coupes, broughams, and limousines steadily increased, to the neglect of the smaller open cars.  By 1909, the Silent Waverley Electrics used a “noiseless” shaft drive from the traction motor to the rear wheels.

The 1911 Model 81 Brougham’s interior was finished in broadcloth, broad lace and “Goat Morocco” leather.  It used either solid or pneumatic tires with side-lever steering and ran on Exide, Waverley, and Edison batteries.  Standard luxuries included a flower vase, two vanity cases with watch and salt bottles, a match safe and cigar holder, and an umbrella holder.  In 1912,Waverley offered the first front-drive electric. 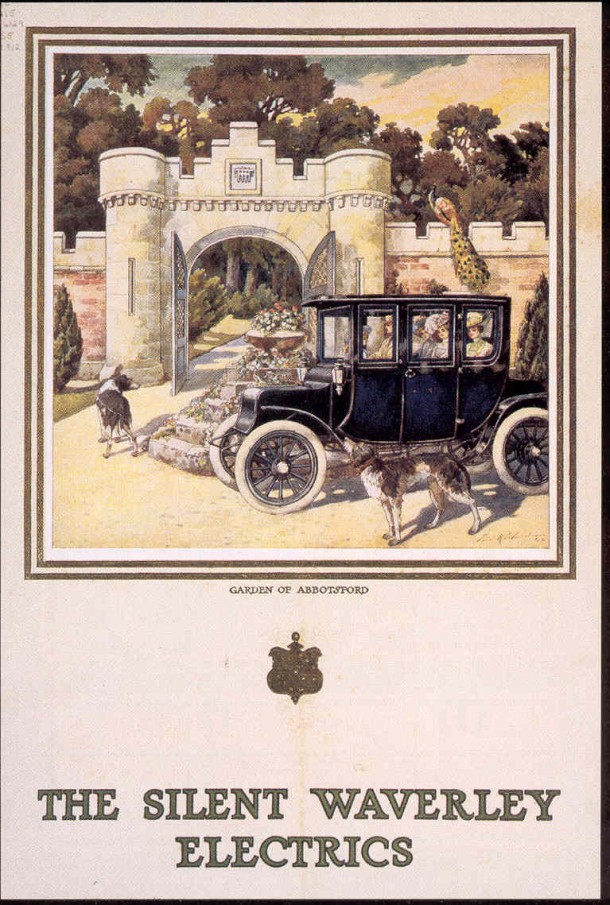 The 40-page 1914 catalog gave copious descriptions of six models including the Roadster Coupe that rode on a 104-inch wheelbase and looked like a conventional gasoline roadster with a long hood and a false radiator.  The four-passenger Brougham was offered in three versions: front-drive, rear-drive, and front-and-rear-drive.  To help promote sales, the company published “A Day with a Silent Waverley.”  This pamphlet charted the day of a fictitious woman as she rolled up the miles in the Silent Waverley traveling from the office, school, shopping, and other engagements. She was able to travel, according to the pamphlet, without the fussing and fuming of gasoline autos.

Most electrics, though almost noiseless, were annoyingly slow (5-25 m.p.h.) and their batteries needed recharging after a few hours of use.  Suitable for densely populated areas, electrics were seldom seen in the open country because of their limited traveling range (up to 75 miles).  Although later Waverley’s furnished a range between charges sufficient for about two day’s use, the popularity of electric cars began to wane.  All of this sounds eerily familiar with today. Waverley electrics were no longer produced after 1916.

If this site could show its early incarnation, I wonder what the view looking northwest from the Waverley factory was like 100 years ago?