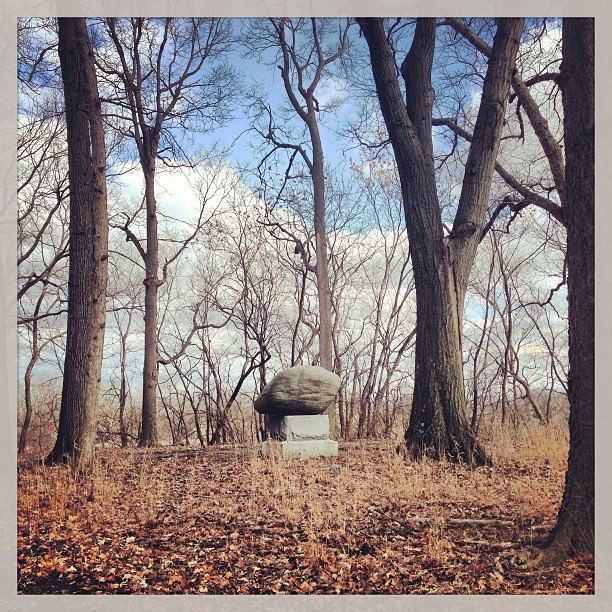 Monument in the woods of Riverside Park, north of Municipal Gardens.

Just up the bike path from the Municipal Gardens, along the White River is a peculiar boulder that can just barely be spotted from Cold Springs Road.

The boulder is upon a concrete pedestal that, judging from the surrounding broken glass, is a frequent target for airborne beer bottles. Set into the it’s river-facing side is a heavily patinated and slightly incomplete plaque that reads: 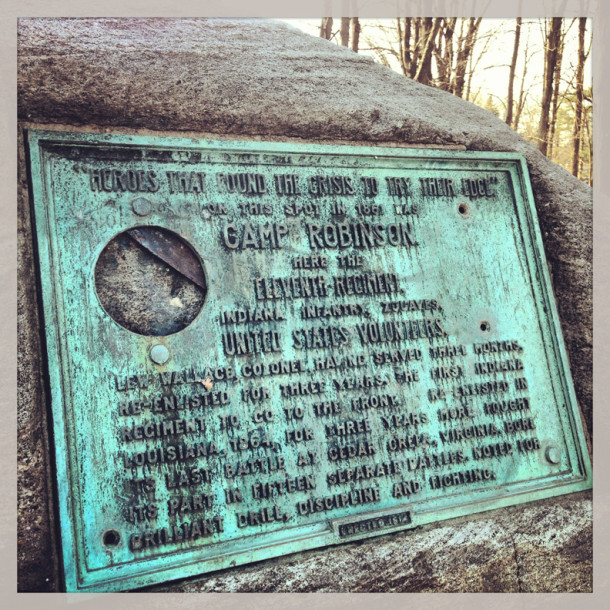 On April 12th, 1861,news of the Confederate attack on Fort Sumter in Charleston, SC spread across the country by telegraph and  reached an Indianapolis wholly unprepared for war. With no camps, weapons or supplies, Governor Oliver Morton tapped Crawfordsville native Lew Wallace to organize the rush of state volunteers. 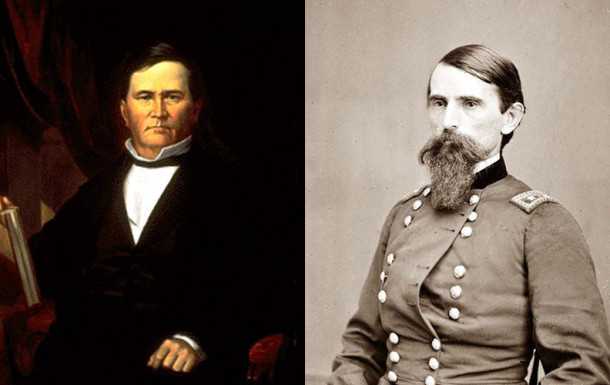 Wallace, a state senator, veteran of the Mexican-American war and son of Indiana’s sixth governor, David Wallace, established a base of operations on the state fairgrounds, an area now outlined by Talbott St., 19th St., Central Ave. and 22nd St. Renamed Camp Morton, in honor of the sitting governor, the camp would go on to gain a particular level of infamy when it was converted into a prison camp for Confederate soldiers in 1862 many of whom now rest in the Confederate Mound at Crown Hill Cemetery. 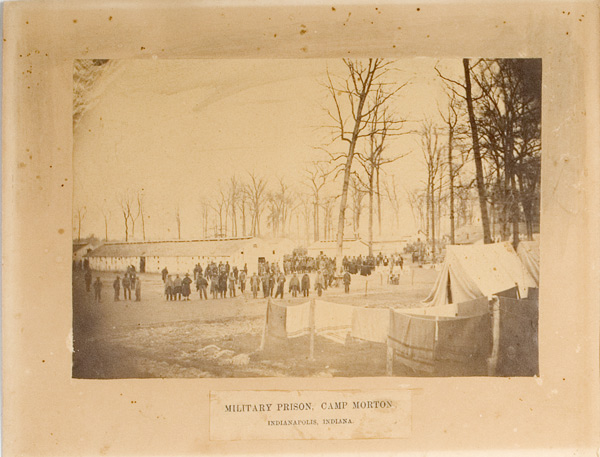 However, still one year prior, the Union still in full training mode, several other training camps were created in and around Indianapolis to handle President Lincoln’s call for volunteers. Largest of which were Camp Sullivan (which predated Camp Morton and is now Military Park), Camp Carrington (near 15th & Fall Creek), Camp McClellan, (now Ellenberger Park in Irvington) and Camp Robinson at what is now Riverside Park.

It was at Camp Robinson that Lew Wallace assembled and trained the Eleventh Indiana Volunteer Regiment, of which he was now the commanding officer. Before embarking upon their relatively short three month enlistment, Wallace marched his men to the Indiana Statehouse, was presented a regimental flag by the “Ladies of Indianapolis” and pledged to “Remember Buena Vista” a pledge to avenge rumors of cowardice on the part of the Fifth Indiana Regiment at the battle of Buena Vista in the Mexican-American War in 1847.

(left)Eleventh Indiana Regiment at the Statehouse pledging to “Remember Buena Vista”. (right) The flag of the 11th, presented to the troops by the ladies of Indianapolis.

The initial enlistment of the Eleventh was a mere three months, which gave them enough time to deploy to western Virginia, take the town of Romney (a town that changed hands no fewer than 10 times throughout the war) and occupied it for a single day, before it was retaken by the South.

After their short enlistment was up, Wallace reorganized the regiment under a three year enlistment, with the aid of George McGinnis, another Mexican-American war veteran who had risen from private to lieutenant colonel within the previous three month tour. 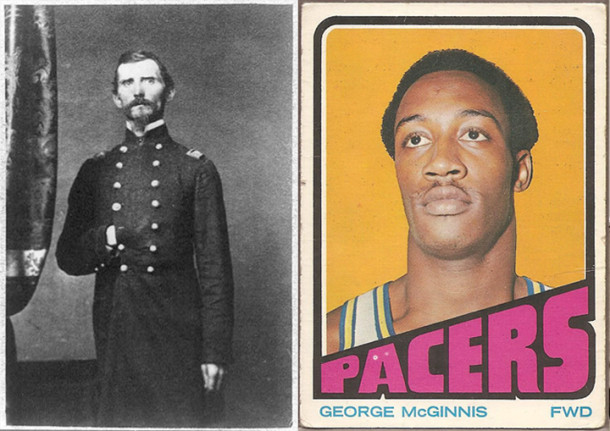 Wallace, McGinnis and the Indiana Eleventh would participate in the taking of Forts Henry and Donelson, the later of which led to Wallace being promoted to Major General. However, during the Battle of Shiloh, miscommunication with General Ulysses S. Grant led Wallace and his troop to arrive six hours after Grant expected them to support the division led by WIlliam Tecumseh Sherman. Though the North won the battle the very next day, the Army needed an explanation for the horrible casualties during the battle and Wallace took the brunt of the blame. He was removed from his command in June of 1862 and spent his remaining days trying to regain his reputation, going so far as to ask Grant to “set things straight” in his memoir.

In the years that followed, after losing his command, Wallace took part in the defense of both Cincinnati and, later, Washington D.C. At war’s end he was a part of the military trial of the conspirators to assassinate President Lincoln and also the trial of Henry Wirz, commandant of the South’s prison camp in Andersonville, Georgia, the Confederate Camp Morton.

After some time in Mexico and time spent finishing a novel begun in 1840 (The Fair God published in 1873) President Rutherford B. Hayes appointed Wallace governor of the New Mexico territory in September of 1878. What was described by some as a reward for his Republican support of Hayes, the appointment placed Wallace squarely in the middle of Navajo land disputes and the famed “Lincoln County War”, fictionalized in the 1970 John Wayne vehicle Chisum and more recently in the 1988 Emilio Estevez film Young Guns. 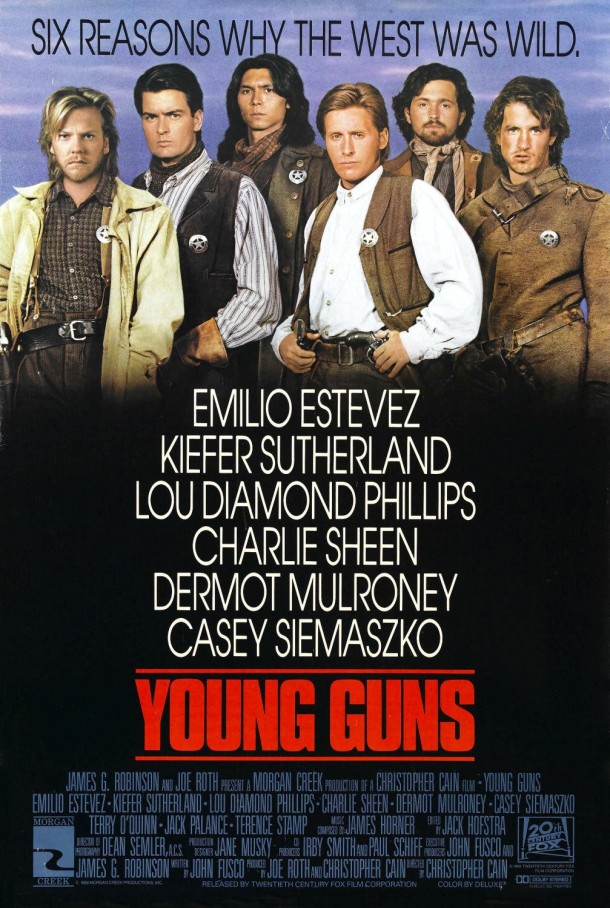 Young Guns. Better than Young Guns 2, still not a documentary.

It was while in his New Mexico purgatory that Wallace published his second novel, a little book called Ben-Hur: A Tale of the Christ, in 1880. Ben-Hur would go on to become the best selling American novel of the 19th century, out selling Uncle Tom’s Cabin and several decades later, immortalized on the silver screen by MGM and Charlton Heston. It has been suggested that Wallace drew from his own experiences in the battle of Shiloh for Ben-Hur, where the book’s protagonist, Judah Ben-Hur, injures a high-ranking officer in battle, for which he and his family suffer, seek revenge and finally redemption.

The newly elected president James Garfield read Wallace’s novel and decided that he was an authority on the Middle East and naturally appointed him to serve as Ambassador to the Ottoman Empire (Turkey) in 1881, which somehow seems akin to putting George Lucas in charge of NASA, but that’s neither here nor there. After the corpulent Democrat Grover Cleveland was elected to the presidency in 1884, Wallace resigned his ambassadorship and returned to Crawfordsville, IN where he designed and built a writing study near his home, which is now called the General Lew Wallace Study and Museum and is open to the public.

Wallace wrote several other novels and biographies, though nothing as popular as Ben-Hur, and was working on his autobiography when he past away in 1905. His widow Susan, a writer and poet in her own right, finished his biography, still missing 40 years of his life at his passing, with the aid of Wallace’s own letters and articles. Susan followed two years later and the couple are buried in Oak Hill Cemetery in Crawfordsville. 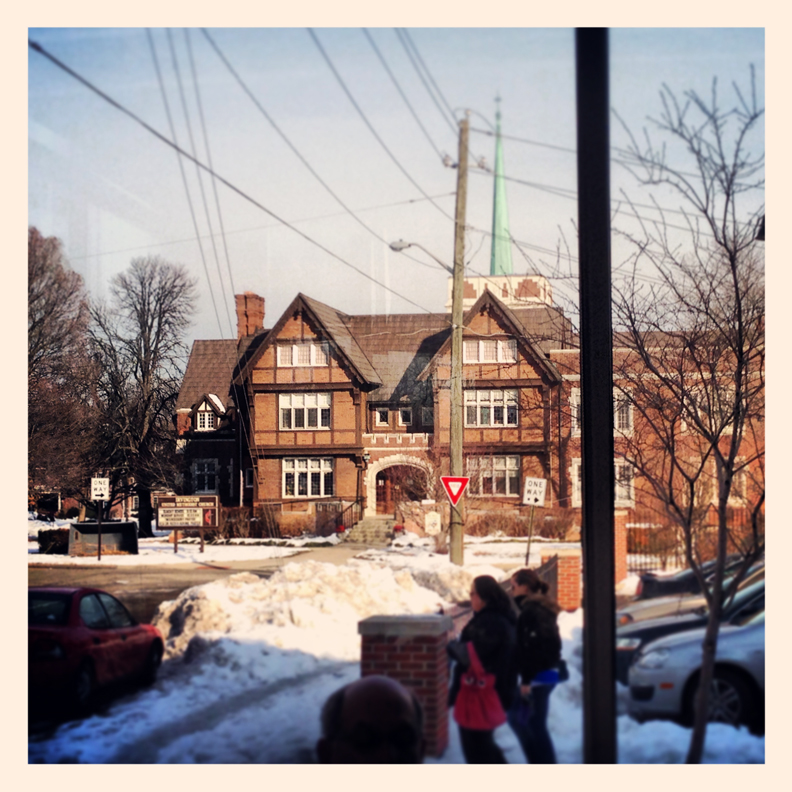 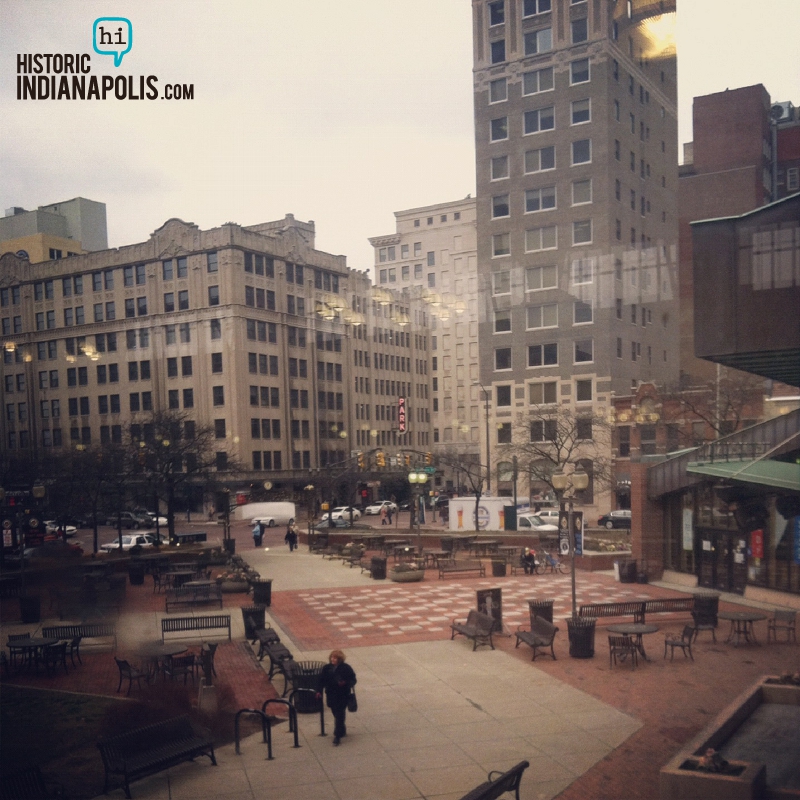 Room With a View: City Market 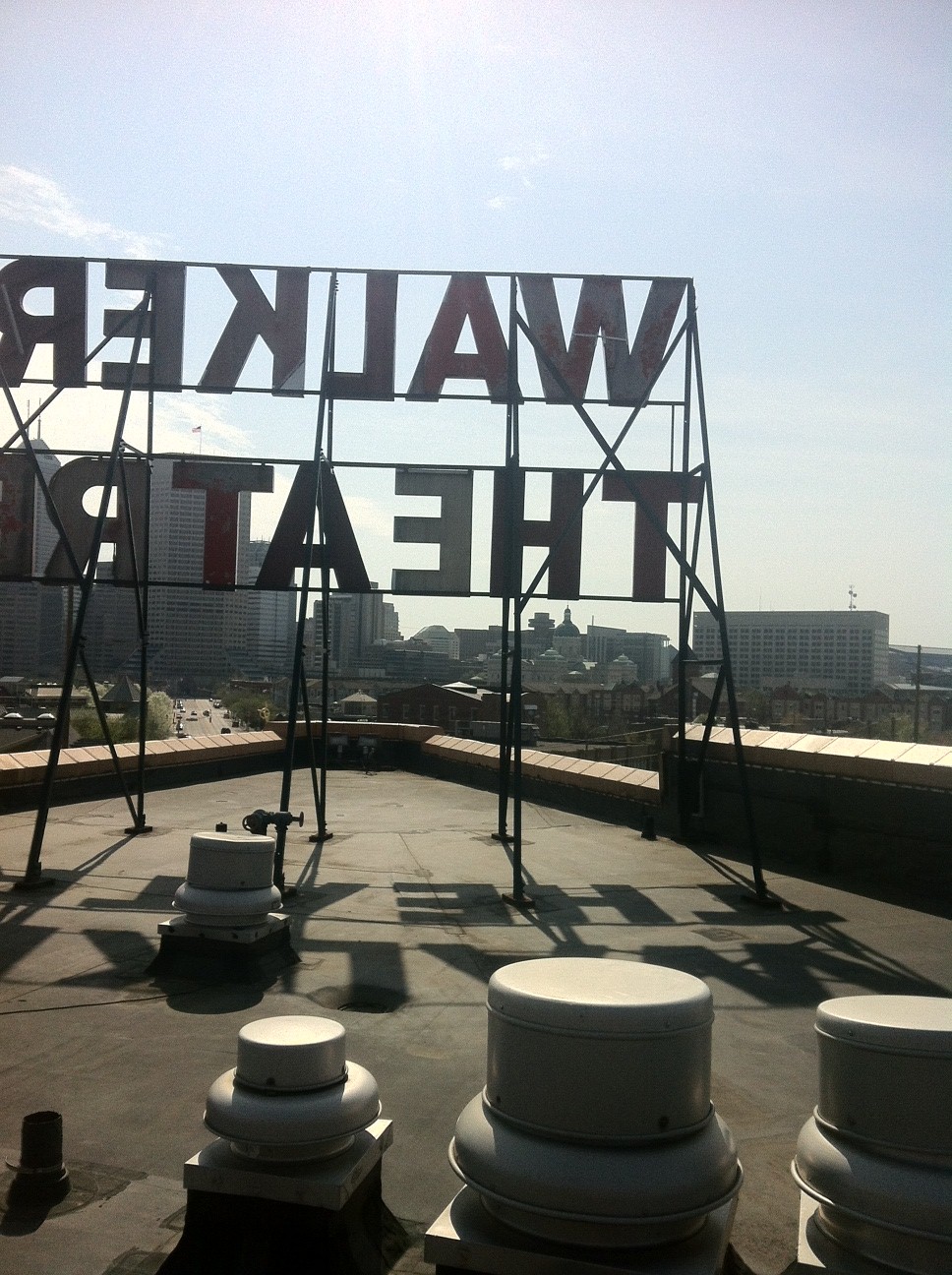 Room With a View: Walker Theatre to Downtown 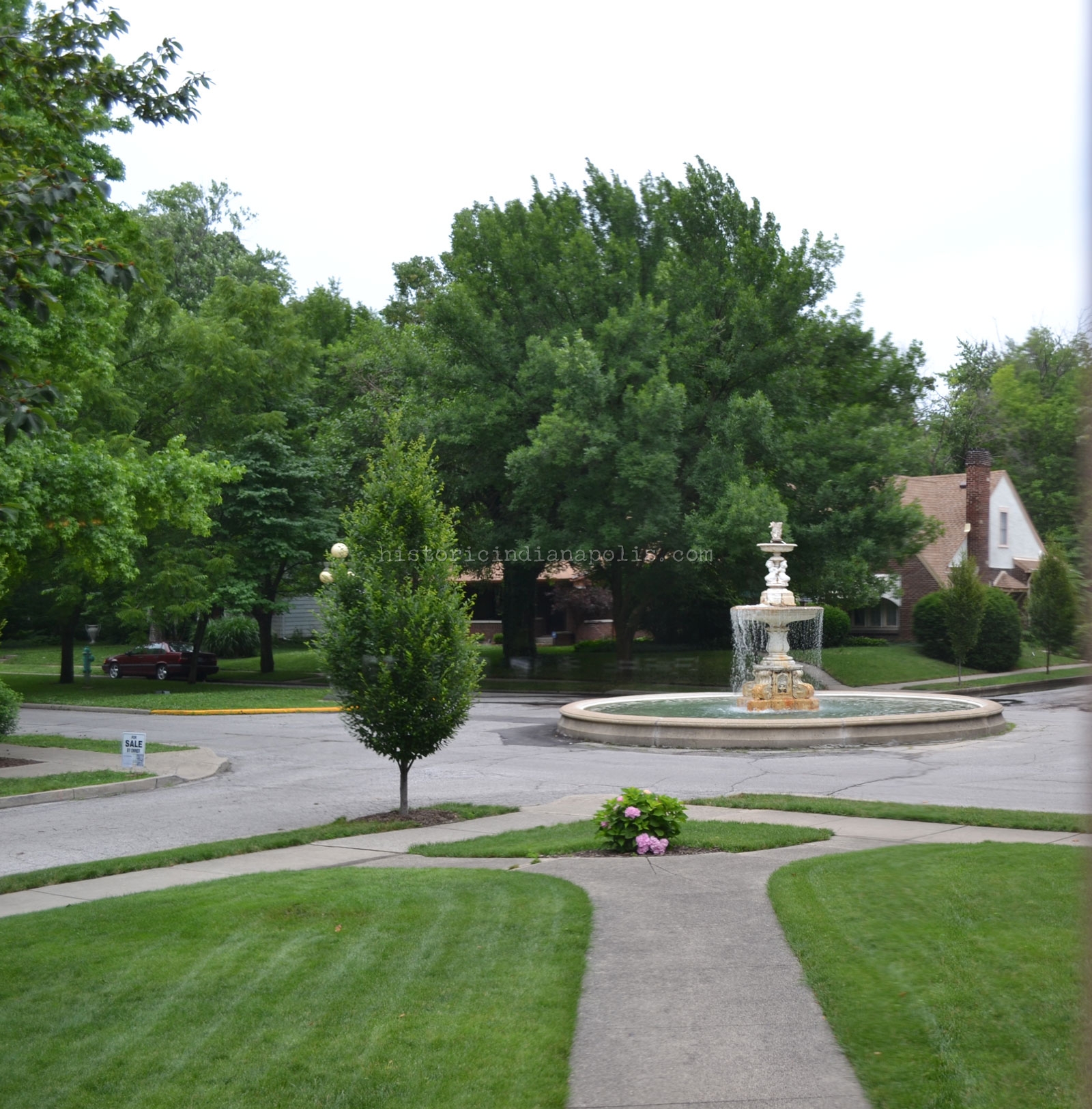 Room with a View: Woodruff Place