During the summer of 1949, an elderly man named Joseph Clovese bought a new pair of shoes.  Made of kangaroo leather and reportedly “soft as a kitten’s fur,” the shoes were purchased specially for Clovese to wear at a national convention of Civil War veterans in Indianapolis.  This would be the first Civil War reunion for the former Union soldier who had been born into slavery 105 years earlier, and the last hurrah for the once-grand Grand Army of the Republic.

The GAR was a fraternal organization for Union veterans that was established shortly after the Civil War to preserve the memory of the war dead and protect the rights of the survivors. At its peak in 1900, the GAR had 592 posts in Indiana and more than 400,000 members nationwide.  But by the time its final convention was gaveled into session in August 1949, the GAR’s membership had dwindled to 16 elderly men, only six of whom were hardy enough to make the trip to Indianapolis.  Joseph Clovese was one of these six “Grand Old Men” who came to the city in 1949 to close a chapter in American history. 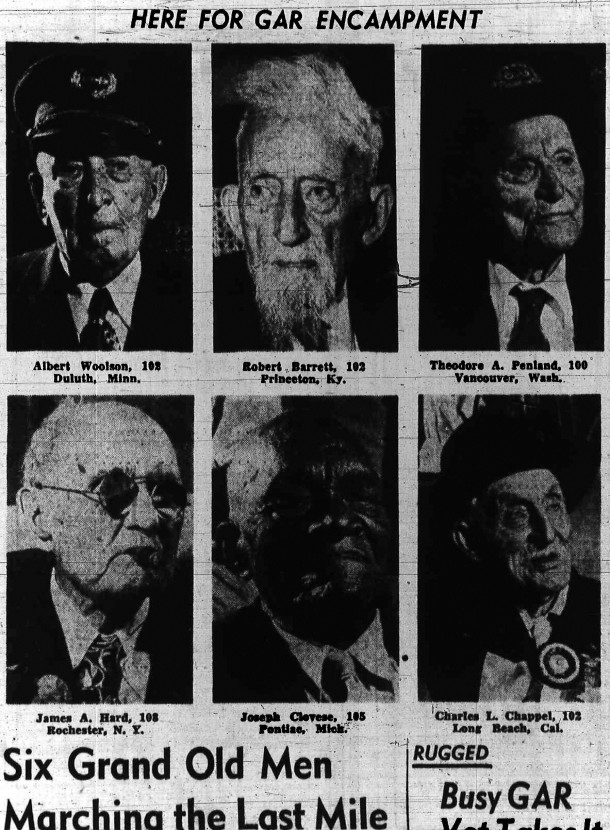 The youngest of the six was Theodore Penland from Vancouver, Washington. At age 100, Penland served as the GAR’s final Commander in Chief.  James Hard, 108, was the oldest veteran to attend the encampment, traveling from Rochester, New York with a private nurse.

There were no Indiana veterans at the GAR’s final encampment.  The state’s last remaining GAR lodge had closed six months earlier with the death of 102-year-old John Christian Adams of Jonesboro.  Adams had been the last surviving Hoosier member of the Grand Army of the Republic.

Pictured above is a badge from the 1893 GAR encampment featuring Commander-in-Chief Theodore Penland.

Although he had been active in the GAR in his home state of Louisiana, Joseph Clovese had never attended a GAR encampment until he came to Indianapolis in 1949.  Born into slavery on a sugar plantation, Clovese had run away at age 17 to fight for the North with the United States Colored Louisiana Infantry, 9th Regiment. He was discharged from the Army in 1865, and eventually went to work on the steamboats along the Mississippi and Ohio Rivers.  At age 40, he was able to reconnect with his mother through another former slave who knew her whereabouts, and he settled down with her in the New Orleans area, where he finally learned how to read and write.

In September 1948, Clovese created a stir when he moved to Michigan and tried to join a local GAR post.  Eager to meet other Civil War veterans, Clovese called the local newspaper in an effort to track down the nearest GAR post. He was informed that Michigan’s last surviving Civil War veteran had died five months earlier at the age of 99. The next day, Civil War buffs in Michigan were thrilled to read in the newspaper that their home state had gained a new “last man standing.”

Clovese did learn that the final GAR encampment would be held in Indianapolis the following year.  That was only 300 miles from his new home in Pontiac.  Even though he was nearly blind, confined to a wheelchair, and 104 years old, Joe Clovese decided he would make the trip. 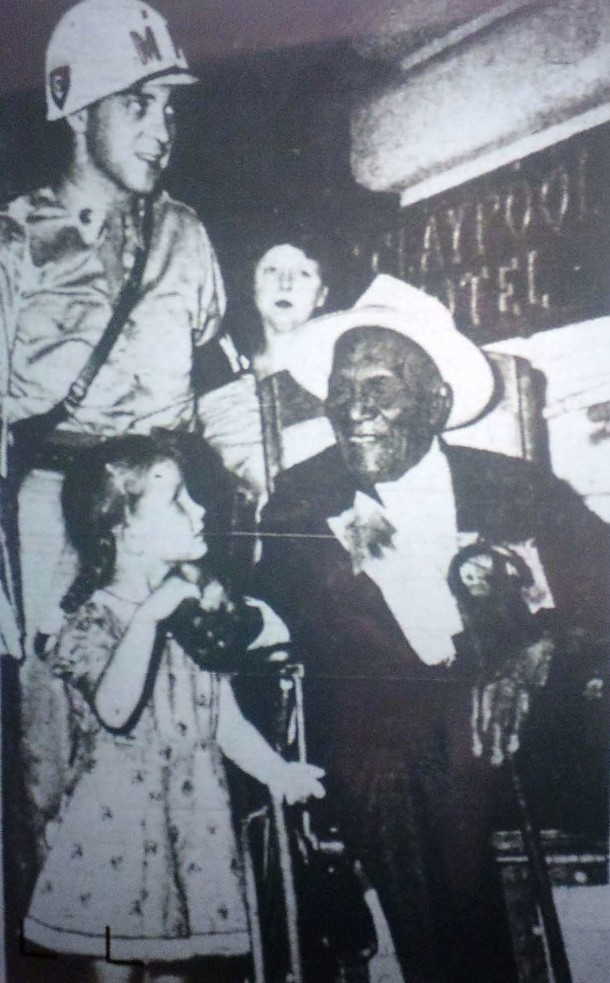 The GAR’s final encampment was headquartered at the Claypool Hotel, where the six elderly veterans were tended to by nurses from the Veteran’s Administration and escorted by members of the Indiana National Guard.  An Indianapolis News photographer snapped the photo above of Clovese at the hotel, where he met a young girl from Shelbyille who was 100 years his junior.

Although she was only four years old at time, Gail Sleeth Pogue still has vivid memories of the encounter with the former slave who had fought for the Union in the Civil War. “He was very nice,” Pogue told me last night when I reached her at her home in California, where she owns a Wilds Birds Unlimited store and works part-time as a substitute teacher. “I had never seen a man in a wheelchair before, so I remember being very curious about the chair.”

Pogue does not recall why she was at the Claypool Hotel that day or how she ended up in the photo, but assumes that her father, a stringer for The Indianapolis Star, had arranged for the meeting.  While she was too young in 1949 to grasp the concepts of war or slavery, Pogue now appreciates the historic significance of her brief meeting with the man who was the last surviving African-American to fight in the Civil War. 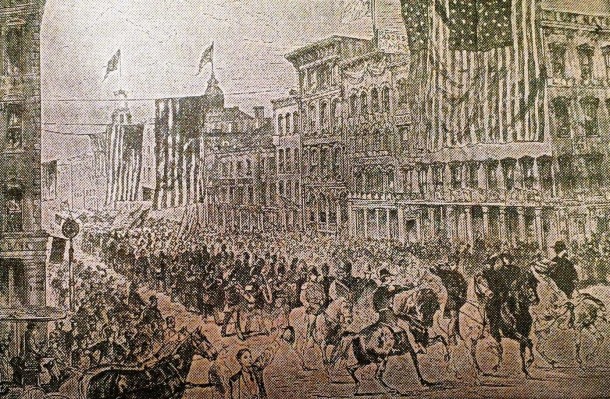 Sketch of the 1st GAR national encampment, held in Indianapolis on November 20-21, 1866

It was only fitting that Indianapolis was selected as the site for the last GAR encampment, which was organization’s annual national convention. The first national GAR encampment had been held in Indianapolis in November 1866.  Some 288 delegates from 11 states converged on the Morrison Opera House at Meridan and Maryland streets to elect officers and adopt resolutions that, among other things, called for “state and national legislation for the education and maintenance for the orphans and widows of our deceased comrades, and maimed brethren.”

In June 1881, the GAR returned to Indianapolis for its 15th national encampment.  By then, the organization’s ranks had swelled to nearly 86,000 members. What started out largely as a fraternal organization with flowery rituals and secret handshakes had now emerged as a potent political voice on veterans’ rights. In Indiana, the GAR was instrumental in establishing the Indiana Soldier’s and Sailor’s Children’s Home in Knightstown and securing legislation to build a monument for Civil War veterans in Indianapolis.

Then in 1893, when the Indiana Soldiers and Sailors Monument was still under construction, Indianapolis won the Superbowl of GAR encampments. 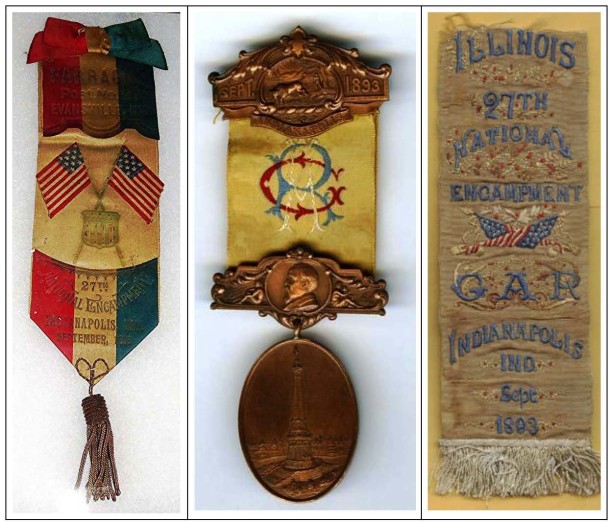 Badges and ribbons from GAR encampments are highly sought after by Civil War collectors. The badge of the far left from an Evansville lodge recently sold on ebay for $77. The Indianapolis badge in the middle fetched $161 at auction, and the Illinois ribbon went for $45. All three are from the 1893 encampment in Indianapolis.

The GAR was now more than 400,000 strong, and the 1893 encampment was projected to draw thousands of visitors and millions of dollars to any city that was lucky enough to host the massive event. Realizing the potential impact on Indianapolis, William Fortune and Col. Eli Lilly organized a lobbying effort that effectively wooed the GAR away from other midwestern cities that were also vying for the convention.

An estimated 300,000 visitors and delegates passed through Union Station during the week of the 1893 encampment.  In order to accommodate the hordes of GAR members and their families, tent villages were erected in the downtown area to provide free housing to 45,000 old soldiers, and private citizens were recruited to let rooms in their homes at a moderate cost to an additional 40,000 visitors. 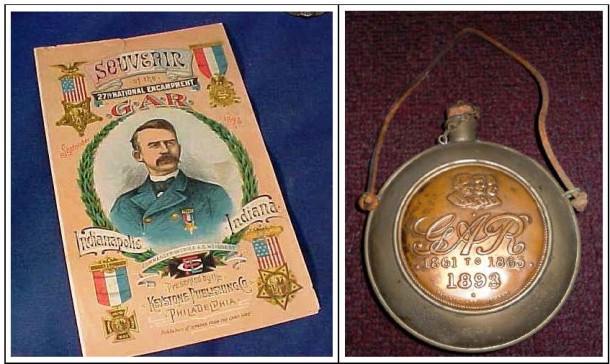 Souvenirs were also available for sale at the 1893 encampment. Although most souvenirs were relatively inexpensive in 1893, the program shown above recenty sold on ebay for $84 and the canteen sold for $180.

The encampment was marked by fireworks and festivities. Delegates met at Tomlinson Hall, but had ample free time to enjoy the city’s many sights, including a full-sized replica of the USS Kearsarge which had been built on the east lawn of the Statehouse.

Although the Indiana Soldiers and Sailors Monument was still under construction, convention organizers arranged for temporary lighting to illuminate the base at night.  And at a special reception for members of Indiana’s GAR delegation, the massive statue of Victory that sits atop the Monument was removed from her crate and exhibited for view. 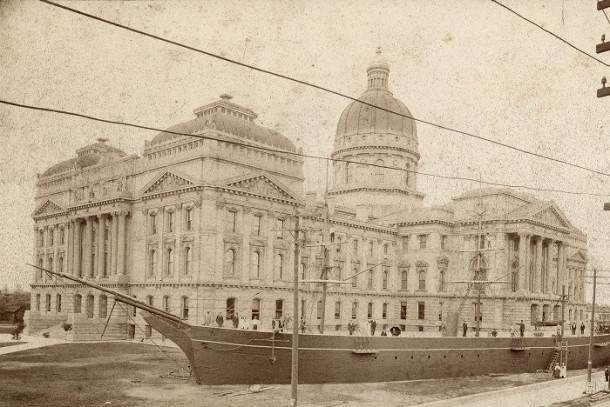 But the highlight of the 1893 encampment was the parade.  All of the buildings in downtown Indianapolis were festooned with flags and bunting, and homes along the parade route on Meridian and Delaware streets were decked out in patriotric colors. Thousands of cheering people lined the streets to see the Civil War veterans — then in their 50s and 60s — march past in their faded uniforms.

Indianapolis would host five more national encampments after the 1893 event.  With each meeting, the number of veterans dwindled while the crowds of well-wishers grew.  At the 1913 state encampment in Indianapolis, an estimated 30,000 people stood on the sidewalks and hung from the windows to watch the parade. The Indianapolis Star reported that many in the crowd were moved to tears by the sight of 2,400 faltering veterans proudly marching in a torrential downpour.

By the time the national encampment returned to Indianapolis in 1920, the GAR’s ranks had declined to 103,258 members – barely a quarter of the size it had been when the city last hosted the event some 27 years earlier. Far fewer GAR members showed up for the event.  But an estimated crowd of 100,000 people turned out to see the parade.

While many of the veterans were still able to travel the route on foot or by horseback, a fleet of flag-draped automobiles carried those who had become too frail to march. The Indianapolis Star trumpeted the parade as “a great day for the old soldiers…. One that has surely proved to them that they have not been forgotten and that the nation still accords them all honor and reverence.” 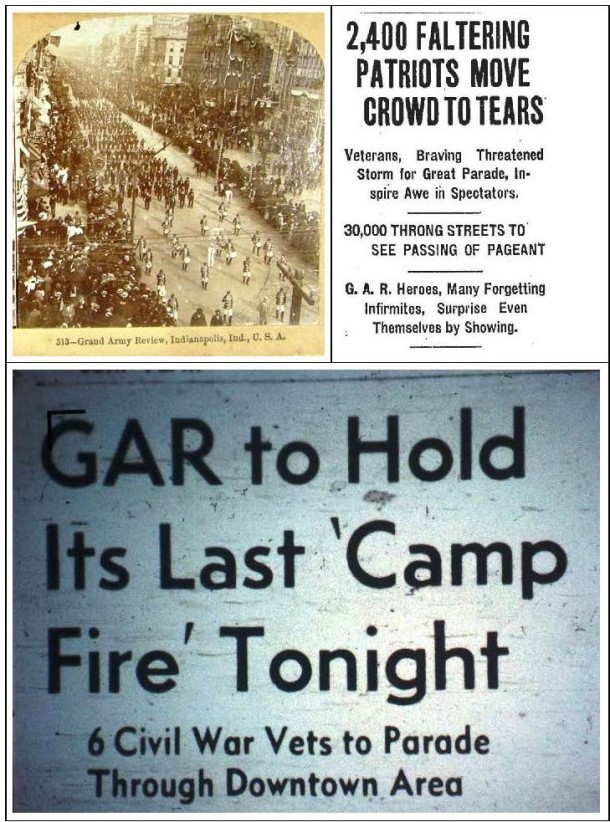 The GAR’s ranks continued to drop at an exponential rate with each passing year. When Indianapolis hosted the 76th national encampment in 1942, there were only 518 surviving GAR members.  When the GAR convened four years later in Indianapolis,  the membership had dwindled to 103 men. By 1949, at the 82nd and final GAR encampment, there were only 16 remaining members of the national organization that once served nearly half a million veterans. Six made the trip to Indianapolis.

Thousands of people watched the six “Grand Old Men” march the last mile, metaphorically speaking, in the twilight hours of August 31, 1949.  Too frail to walk, these survivors of the Civil War traveled the parade route via automobile.

That night, the Grand Army of the Republic held its final “Campfire” at the Indiana Roof Ballroom.  After a round of reminscences by the old comrades, the colors were slowly retired for the last time while the U.S. Marine band played “Retreat.” 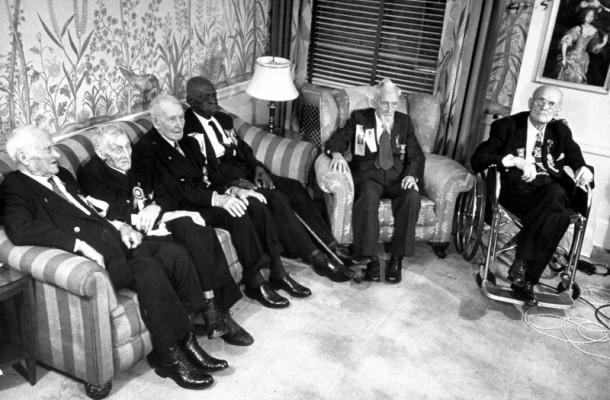 The last of the Union soldiers, Indianapolis, 1949. Joseph Clovese died in Dearborn, Michigan on July 13, 1951. The last Union veteran to die was Albert Woolson, who passed on August 2, 1956. A monument has been erected at Gettysburg in his honor.