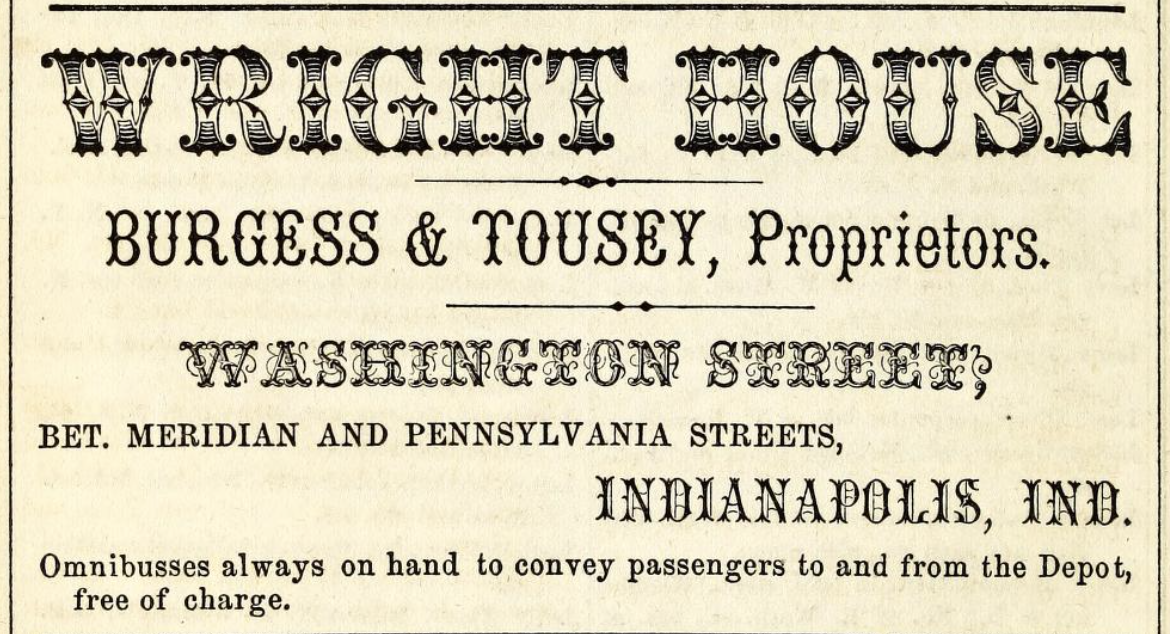 In the early 1850s, Englishman J. Richard Beste and his family came to America and toured the interior, including Indianapolis. As was popular at the time, he wrote a travelogue “The Wabash: or Adventures of an English Gentleman’s Family in the Interior of America” upon his return in 1855.

The family had come to Indianapolis via the railroad from Madison, and stayed at one of the city’s early hotels. You might remember seeing an advertisement for Wright’s House in this collection of hotel ads earlier this month. It was located on Washington Street, between Meridian and Pennsylvania. The house was not the fanciest hotel in town, but wasn’t an economy stay either.

Here are Mr. Beste’s notes on his hotel stay in Indianapolis in late June, 1851…

Mr. Tuttle, the proprietor or manager of the Wright’s House hotel at Indianapolis, seemed to think his premises already too full to accommodate my party; but he showed me a wing of the house, running back between yards and gardens, which I could have if the apartment would suit me. There were several bedrooms, side by side, all communicating with an open balcony and trellis-wood shaded by roses and jasmines in full bloom. We were seduced by the freshness of the flowers; and engaged the rooms at once by the week. We did not consider that, there being no second story over that wing of the house, the sun would strike through the tiles and roof, and raise the temperature of our rooms to that of a moderately-heated oven. When we discovered this to be the case, it was too late to change: and we comforted ourselves by opening the doors upon the flowery balcony and the windows opposite: we so secured a current of air-heated but refreshing.

We went down to dinner in a large room on the ground floor. There were not above a dozen other persons at table; so that we constituted half the company. Here we first saw in use what, in the East Indies, were called “punkas”:–above the whole length of the dinner table, several light frameworks of wood, covered with paper, were swung upon hinges from the ceiling, and hung down within a couple of feet of the tablecloth: a cord passed through and was knotted to the bottom of each framework, and was then carried on through pullies to the further side of the room. This a negro waiter boy was pulling steadily, and so caused the hanging screens to wave backwards and forwards above the table; thus not only a delicious current of air was kept up, but, also; the flies were dispersed that congregated, in black patches, upon the dishes, whenever the lad paused to rest in his monotonous exercise. It was a most simple and inexpensive, but a most delightful way of being fanned. 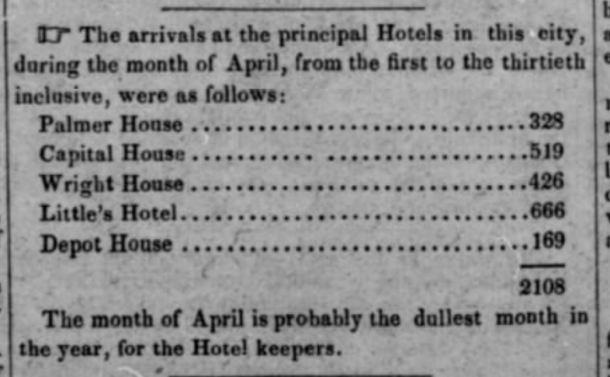 May 1851 hotel stats for Indianapolis

The company consisted of either boarders in the house or travellers. They were all quite inoffensive. Indeed all Americans are so at their meals. As they grudge every minute which they steal from business for the purposes of eating, and as they never, or scarcely ever drink wine, beer or spirits, they have every motive to be silent and none to talk. Although they, of course, want the polish of the highest circles, their manners are very much better than those of the same class in England: and, indeed, their universal politeness to women is unequalled, unapproached even by any class in any country. Here are no fussy petits soins and fidgeting complimentary interference, such as Sterne finds so delightful: but a show of genuine respect for a petticoat by whomsoever worn. In no saloon, in no steamboat throughout the United States, will any man, of whatsoever rank, retain a seat while any woman of whatsoever rank is standing without one. Like Byron, they

“reverence a petticoat:
A garment of a mystical sublimity,
Whether it be of muslin, silk, or dimity.”

But though the Americans do not drink wine or beer at these tables d’hôte, they are not sparing of iced water, the one universal luxury. Here, also, for the first time, we saw tea drunk at dinner: large boilers full of tea were standing on a side table, and the women especially were frequent applicants for it. I tried the mixture; and can truly recommend a large bowl of strong tea, with a large lump of ice floating and quickly melting in the middle of it, as being most palatable,–at a midday dinner during the dog days.

He goes on to describe the city in general, and his plans for continuing by wagon to the west, but that will be have to be shared another day.

The hotel was managed by Burgess & Tousey by 1857, as the ad above reflects.