As the Indiana Pacers tip off the new season, fans are anxious to see if the team can overcome adversity and match last year’s whirlwind winning pace to get back to the Eastern Conference Finals. Did you know that Indianapolis once featured a team during the early years of the NBA that was owned by its players?  The Indianapolis Olympians story is one of the strangest in the history of pro basketball. It features glory, optimism, scandal and ultimately, failure. 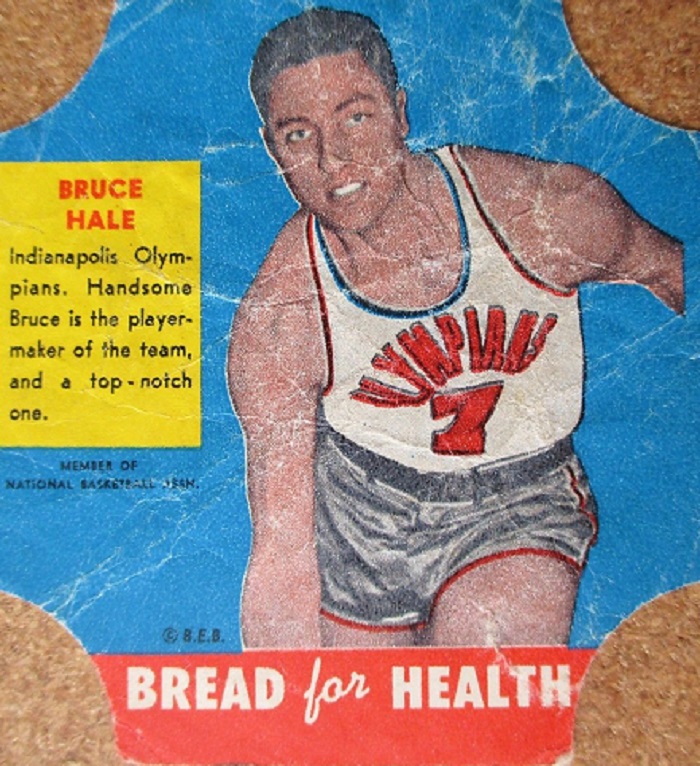 This particular basketball card comes from the end of a bread package. Thirty-two players in all were featured in this series. Bruce Hale made the tour of Indiana Professional Basketball, logging time with the Olympians and the Fort Wayne Pistons. The Santa Clara University graduate coached at Miami University and Saint Mary’s College before passing away in 1980. (Image: eBay)

We’ve all heard the negative cliché about inmates running the asylum. Can you imagine a professional sports franchise owned by its own players? That was the situation in Indianapolis during the National Basketball Association’s inaugural season in 1949. The Indianapolis Olympians were started by five former standout players from the University of Kentucky: Alex Groza, Ralph Beard, Cliff Barker, Joe Holland, and Wallace Jones. 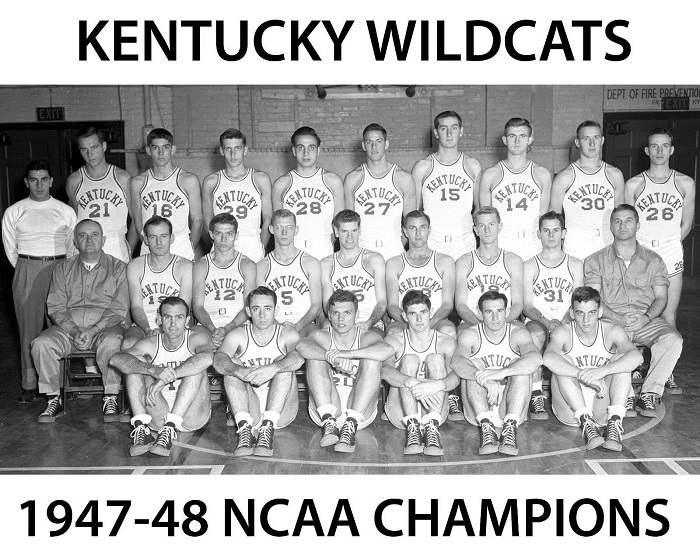 The NBA of 1949 was a far cry from the flashy star-driven juggernaut we know today. The league was formed by the merger of two existing professional leagues, the BAA and NBL. It featured teams clustered around the east coast and Great Lakes. The Olympians played in the Western Division that featured the Anderson (IN) Packers, Tri-City Blackhawks, Sheboygan Redskins, Waterloo Hawks and outpost Denver Nuggets. The home games were held at Butler Field House. Nearly all players of the era earned less than $10,000.00 and had to work jobs in the off-season to make ends meet.

The Olympians charged out of the gate, compiling the best record in the Western Division. The scoring abilities of Alex Groza and Ralph Beard proved to be too much for opponents to overcome. The team’s good fortune did not translate to the playoffs, as they were sent home early by the Anderson Packers. The following season, the team compiled a losing record but still managed to make the playoffs. They were defeated by the Minneapolis Lakers, the team that now resides in Los Angeles. This defeat would signify the beginning of the end of the Olympians.

Before the 1991 Michigan Wolverines the “Fab Five” referred to Indy’s Olympians. This very rare book was published in 1950 shortly before the point shaving scandal broke. Many copies were taken off of the shelf and destroyed after the news broke. (Image: eBay)

Today, there is much debate over the level of compensation a college athlete should receive. Historically, a fully paid scholarship has been the only form of payment allowed. It is currently being argued that a stipend should be awarded to help student athletes make ends meet. This was apparently an issue in the late 1940’s as well. The need for spending money would lead to the demise of the Olympians. In January of 1951, scandal rocked the world of college basketball. A point-shaving scandal was uncovered that would ultimately involve 32 players at seven universities. “Point-shaving” is the term used when players purposely effect the outcome of a game for gambling purposes.

Typically, the team will play to win but not by a wide margin so that the final score falls below the betting line. On October 20, Ralph Bead and Alex Groza were arrested for shaving points in games played during the 1949 National Invitational Tournament for bribes of $500.00 each. The pair were banned for life by the NBA Commissioner. The Olympians assembled a team for the 1952-53 season, but the end was near. The team finished with a 28-43 record and folded at the season’s end. Pro basketball would not return until the Indiana Pacers were established in 1967. The early success of that team and subsequent jump to the NBA erased nearly all memories of the disgraced Olympians, who remain a largely forgotten chapter in the history of  Indianapolis sports.