At Your Leisure: A Lost Roadside Beacon 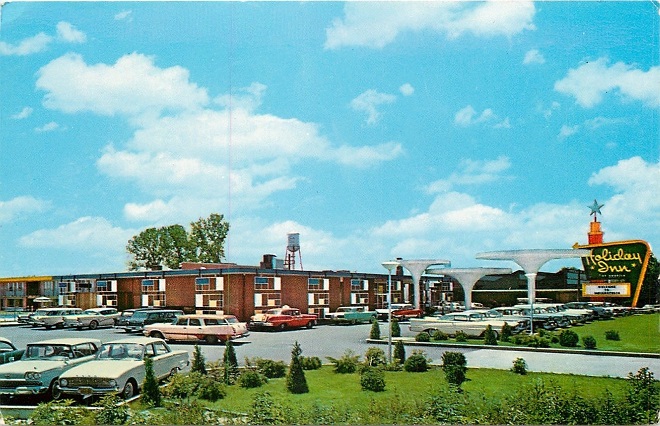 The big green sign could once be seen by drivers exiting turn one at the Indianapolis Motor Speedway. (Image: eBay)

For anyone who may have grown up from the sixties through the eighties, childhood trips often meant a stopover at one of the many Holiday Inn hotels located across the country. The chain was envisioned by Kemmons Wilson in 1952, after encountering poor lodging choices during a family vacation, and essentially created the standardized hotel chain concept prevalent today. Until 1982, travelers could look for the giant green neon signs and be assured of consistency in  accommodations and services. Although the brand still exists under the international conglomerate IHG, it bears little resemblance to the original concept. The last reminder of the traditional incarnation of Holiday Inn in the Circle City is now a pile of rubble on US 31 immediately south of the I-465 interchange.

The first Holiday Inn to open in Indianapolis went up across from the main gate of the area’s biggest attraction, the Indianapolis Motor Speedway. Opening in 1960, the hotel featured a Jetsonian look with large, mushroom-shaped canopies at the entrance. Opening prior to any area interstate highways, the hotel provided the only real lodging options outside of downtown. As a result, the property was always jammed with celebrities and race car drivers during the month of May. 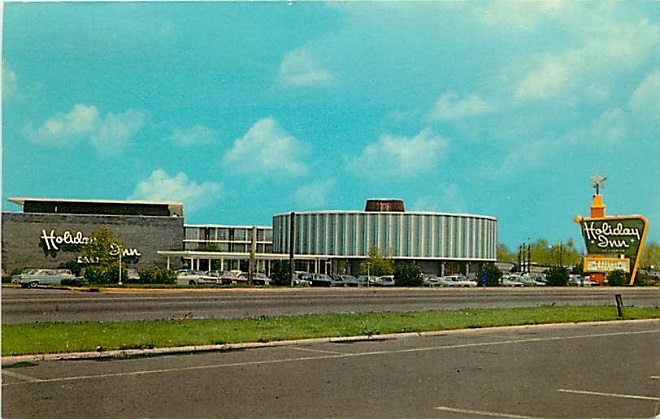 The round lobby and restaurant building made the east side location unique. (Image: eBay)

Based on the success of this initial location, others soon followed. In 1962, a downtown hotel opened at 500 West Washington Street at the confluence of nearly every major highway passing through the city. That same year, a location featuring a distinct round office and restaurant building opened on Pendleton Pike at Shadeland Avenue. An airport location would soon follow on High School Road.  In 1965, the south location near US 31 and Thompson Road opened, along with a second Speedway location near Interstate 465. This, along with the converted Meridian Motor Inn in the midtown area, gave the chain seven locations in the city by 1967.

So, what happened? The modern hotel industry that Holiday Inn helped create isn’t designed for any kind of longevity. Once buildings are depreciated and money is made, properties are often sold. Out of date by this point, they are no longer able to meet requirements of the franchiser, and most go into a period of rapid decline. The 16th Street location went through a series of absentee owners and was operating as the “Classic Motor Inn” by 1975. Perhaps an appearance on the television show “Cops” prompted the Speedway to buy the property in 2004, and turn it into race day parking. The east location became known as the Swiss Chalet by 1978. Operating later as the U.S.A. Inn, it gained the attention of the city for all of the wrong reasons and was demolished in 2005.  The downtown location was essentially replaced in 1986 with the opening of Union Station. The Eiteljorg Museum has sat on the site since 1989. The other Speedway location began operating as a Motel 6 in 1990, until it too was razed in 2013, leaving that town without any overnight accommodations. The south side location eventually became known as the Cavaliers Resort after stints as a Quality Inn and Ramada Inn. The property became an awful place to stay, based on reviews still posted online, and just recently met the wrecking ball after being abandoned for more than two years. The airport location does live on after being rebuilt in the 70’s, and now operates as the more upscale Crowne Plaza.

What are some of your favorite memories of staying or dining at this once dominate institution? 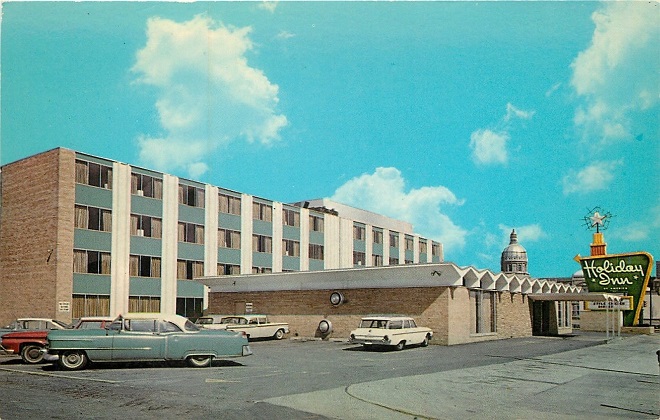 The rotunda of the Indiana State Capitol can be seen in the distance of this early Sixties shot of the downtown Holiday Inn. (Image: Amazon)