This exterior shot from the 1967 Butler yearbook must have been taken shortly after completion due to the fresh pavement and lack of landscaping (Image: Butler University)

An annual holiday tradition takes the stage when the Butler Ballet presents “The Nutcracker” over the weekend. Crowds will flock to the 2,200 seat Clowes Hall to see and hear yet another interpretation of this holiday favorite. Throughout the years, this unique structure has hosted a variety of performances and served as the home of The Indianapolis Symphony Orchestra.

Designed by Evans Woollen III in 1963, the whopping sum of $3,500,000 (nearly $27,000,000 in 2014) in funds were raised to construct an auditorium to benefit the entire community. The namesake of the building is Dr. George Henry Alexander Clowes (1877-1958). Dr. Clowes was Director of Research at Eli Lilly and Company for many years. Created in 1952, the Clowes Fund supports fine arts in greater Indianapolis. The construction of Clowes Hall would not have happened without the generosity of the Clowes family. 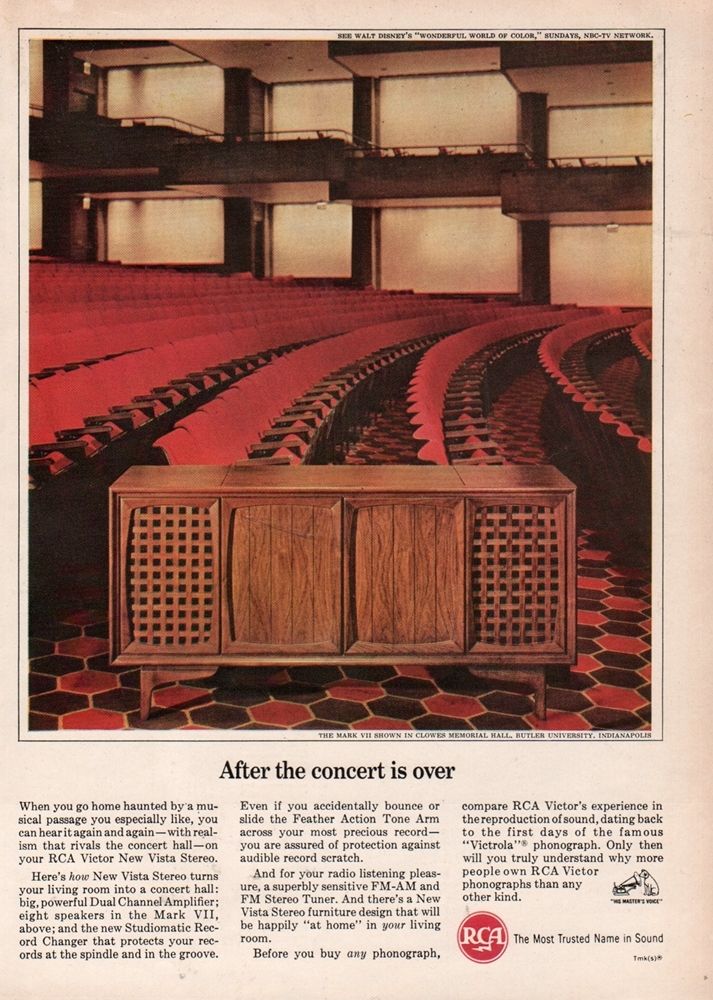 RCA utilized the interior of Clowes Hall to demonstrate the concert hall like quality of the stereos and televisions in the mid 1960s. (Image: eBay)

Architect Evans Woollen III is greatly responsible for some of the more striking, if not controversial buildings in Indianapolis. Aside from Clowes Hall, some of his other works include the Minton-Capehart Federal Building, Barton Tower and the newer addition to the central library.

Clowes Memorial Hall is of the “continental style” of architecture which developed in Britain beginning in the 1920’s. It rejects excessive ornamentation and decoration, leaving the purpose of  the building to define the form that it takes. The result, as you may observe, is a structure that appears rather cold and simplistic on the outside. The interior of the theater employs innovative features that make performances more comfortable for the audience. The rows are wider and no aisles interrupt the main seating floor. The three levels of balconies allow for a nine story stage. The third level of seating was originally intended to be exclusively for the use of Butler students. 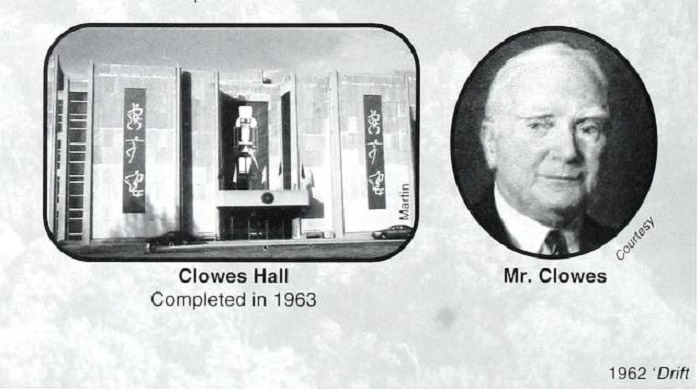 This image shows the exterior of the building as it appeared in 2000 along with Dr. Clowes. (Image: Butler University)

The building gave the Indianapolis Symphony Orchestra a modern new home. Prior to 1963, the symphony hosted concerts in the Murat Theater. The relationship changed, however, in 1982 when the orchestra worked with the city to restore the Circle Theater and relocated downtown.

Today the Butler Ballet, Indianapolis Opera and Broadway in Indianapolis call the building home. On October 27, 2013 the Symphony returned for one performance in celebration of the landmark’s 50th anniversary. Many concerts and lectures are held throughout the year, often free of charge.

What have been some of your favorite performances throughout the years?