The Harrison Hotel located at Capitol and Market once featured a decorative limestone base and awning to protect guests from the afternoon sun. (Image: Amazon)

The fate of a historic building dating back to 1928 is unclear. The State of Indiana has recently moved the Indiana Public Retirement System from its longtime home at 143 West Market Street. The building is currently without a tenant and awaits a buyer. The office building, now covered in stucco and modern windows has housed offices for over forty years. Most don’t realize the first half of its life was spent catering to travelers and bar patrons.

The Hotel Harrison, constructed between 1927 and 1928, was a perfect location to keep visitors to the Circle City. Situated directly across from Indiana Traction Terminal and one block from the National Road, the property was primed to attract plenty of traffic.

Being located across from the Statehouse also insured a steady stream of state representatives, senators and lobbyists. The Harrison was designed by local architect William Earl Russ, who also designed Lockefield Gardens and The Piccadilly, among others. The hotel featured 200 hotel rooms with luxuries such as radios and private baths. Guests could wind down in the Art Deco lounge known as the Creole Room. 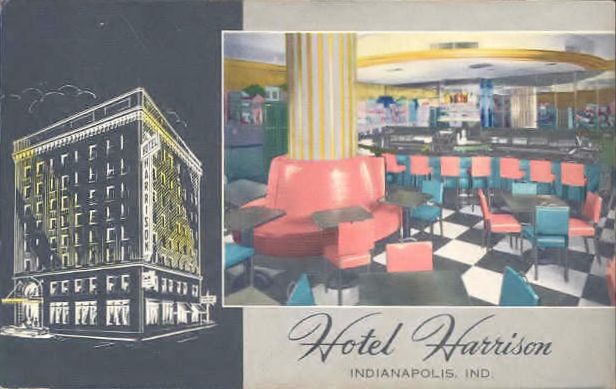 The Harrison lounge, known as “The Creole Room” was furnished in the Art Deco style. (Image: eBay)

What once made this a premier hotel location would eventually leave it equally unappealing. The demise of the interurban system and conversion to a new bus station in 1968 lessened the steady stream of travelers who once poured out of the Indiana Traction Terminal across the street. Coupled with a lack of available parking, the hotel closed its doors in 1971. The building’s proximity to the statehouse likely saved the building. The State of Indiana purchased the building, converting it into overflow office space.

Being one of two historic hotel structures left in the Monument Circle District, the property is primed for a new lease on life. Several former office buildings in the immediate area have been or are in the process of hotel conversions. Could history come full circle for this building, accommodating overnight visitors again?

What do you envision occupying this historic structure in the future?

This matchbook cover would be from after 1936. In that year the Harrison’s owner, Glenn Warren purchased the Hotel Lockerbie and paid tribute to himself by renaming it the Hotel Warren. Most know the Hotel Warren as The Canterbury. Today the property operates as part of the Le Meridian chain of upscale hotels. (Image: Amazon)

At Your Leisure: The Fading of the Orange Roof