At Your Leisure: An Evening in Merry England

A postcard showing the Sheffield Inn. The single story section was a later addition as a large house stood in its place the year the inn opened. At some point this structure was replaced with a different that sits off the street but built in a similar style. Fire perhaps? (Image: Amazon)

Have you ever walked down the street and noticed a particular building that seemed completely out of place? Although commonly found in residential neighborhoods throughout Indianapolis, the Tudor Revival style of architecture is almost completely absent from downtown commercial and residential structures. That’s probably why exposed timbers and high pitched gables on a series of buildings along north Pennsylvania Street jump out from their flat-roofed neighbors. Did you know this was a themed dinner and entertainment establishment that is now on the National Register of Historic Places?

At the turn of the century, the area north of downtown along Meridian, Pennsylvania, and Delaware Streets consisted of single-family homes set back from the street. As the city grew, most of these homes were replaced with businesses and large high rise apartment buildings. The Sheffield Inn, located at 956 North Pennsylvania opened in 1928. The structure could quite possibly be considered one of the first theme restaurants. Advertisements of the day describe “a quaint English tavern.” The complex not only featured a restaurant but also a lounge with nightly entertainment plus 125 hotel rooms. 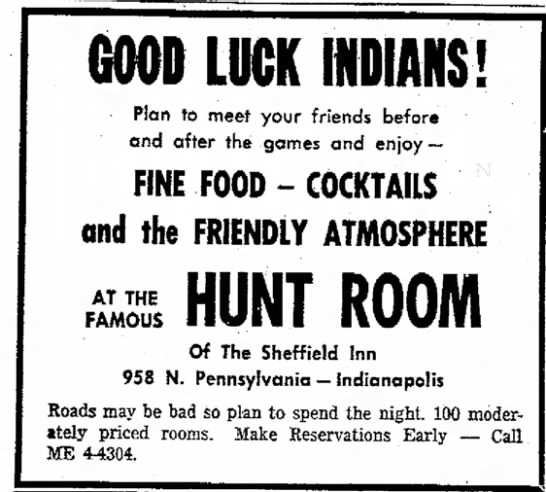 This ad ran during the 1962 State Basketball Finals encourage Anderson Indian fans to stay the night. Those who did probably didn’t see Mr. Noseda who would have been busy ghost hunting at the time. (Image: Indiana State Library)

The owner and operator of the establishment was a man by the name of Emil Noseda. He made national headlines in 1958 when he testified before Robert F. Kennedy and the United States Senate Rackets Investigation Committee. The Inn became the target of Teamster members in 1955, who staged a strike that lasted nineteen months when Noseda refused to sign a contract that would unionize bartenders. Tactics used included an arson attempt at the inn and the assault of an employee. Noseda made headlines again in 1962 when one of his employees, Mrs. Renate Beck, led police on a wild investigation of an alleged poltergeist that hurled dishware and ashtrays at unsuspecting family members. Noseda held vigil in a Delaware Street house for sixteen days and served as an eye witness to police. These strange events were documented in the 1972 book “The Poltergeist.” 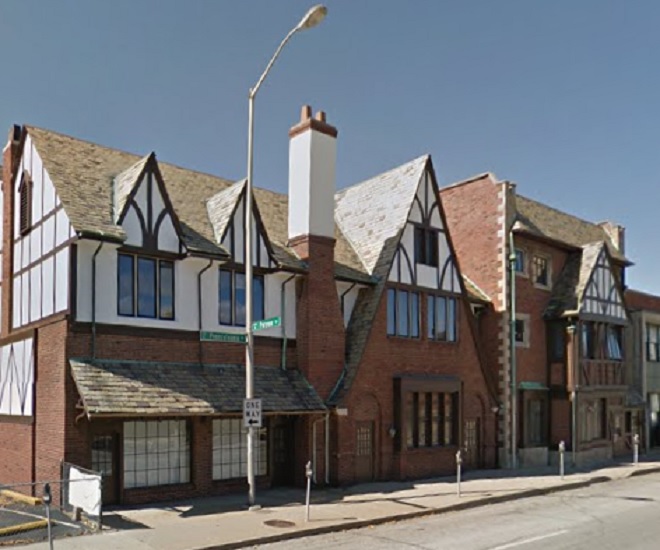 The rowdy crowds of diners and revelers now serves as a quiet home for vets who might not have one otherwise.

Apparently neither union tough guy nor creatures from beyond could get to Emil Noseda, who lived to the ripe old age of 82. The Sheffield Inn closed and became apartments around 1966. Today the building is owned by the Hoosier Veterans Assistant Fund, providing housing for homeless veterans. Do you have any memories of this unique building or its newsworthy proprietor?