Cinema has always been an important aspect to leisure time activities in the Circle City. Throughout the years, the art form has morphed from opulent downtown movie palaces to the drive-in theaters of the 50’s and 60’s, finally onto the suburban multiplexes with stadium seating that we know today. The origins of moving pictures is usually a story of a bustling downtown.

Prior to the second World War, well over thirty theaters existed in the mile square in some form. If Indianapolis had a defined “theater district” in the early half of the twentieth century, it most certainly would have been on Illinois Street between Union Station and New York Street. This six block stretch featured 14 theaters through the years. One particular block along this stretch represented two milestones in motion pictures. 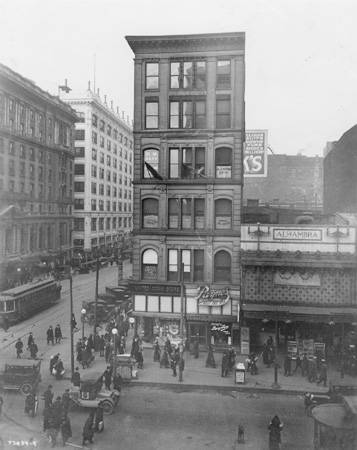 The Alhambra at 44 West Washington Street was the first purpose built movie theater in the city. (Image: Cinema Treasures)

The Alhambra Theater was located at 44 West Washington Street just east of Illinois Street.  The building was constructed in 1913 and featured an ornate facade of ebony and gold colored tiles, fired in nearby Cincinnati at the famous Rookwood Pottery Company. That theater is particularly notable because it was the first building constructed solely for showing motion pictures in Indianapolis. Although films had been shown dating back to the 1880’s, all theaters to that point featured live entertainment as well. Unfortunately, the theater did not survive past 1921. The building was demolished and is now the site of the Conrad Hotel’s lobby. The theater’s organ did survive a bit longer — at the Cadle Tabernacle, until that building met its own demise in 1968. 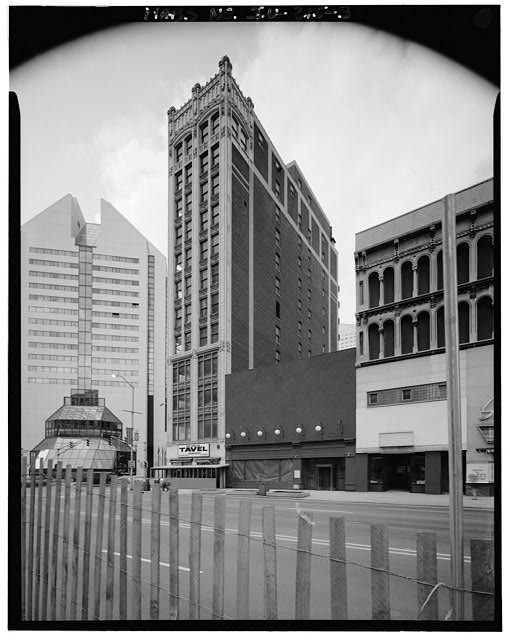 The Alhambra would have stood between the tall, slender Roosevelt Building and the four story Griffith Block. These buildings were raised in 1990. (Image: The Library of Congress)

The demise of the Alhambra would not be the end credits for movies on this particular block. The Apollo Theater opened just north of this site in May of 1922 at 15 North Illinois Street. With a capacity of over 1200, the Apollo would be one of the larger downtown theaters. Although the first “talkie” was shown at The Circle Theater, the Apollo was the first facility to be permanently wired for sound in 1928. The theater enjoyed a much longer run than its predecessor lasting until 1940, when an inexplicable shift to an all newsreel format proved to be wildly unpopular. The building became the Three Sisters Department Store for the next four decades. The heavily modified building met its fate with the wrecking ball in the wide scale demolitions of 1990 that made way for the Circle Center Mall.  The Conrad was constructed on the site in 2006.

There was a 15-year void of first run films in downtown Indianapolis between the closing of The Circle Theater and the opening of The Circle Centre Mall. Today, the marquee for the United Artists cinemas looms above Illinois Street paying homage to the area’s past as an entertainment destination. Although devoid of the charm and opulence of the golden age of the movie palaces, one can still take in a film as their grandparents may have so many years ago! 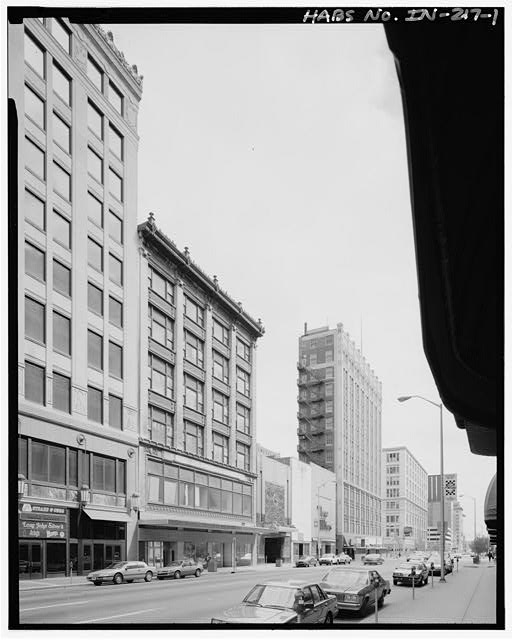 The Apollo building stands directly north of the Roosevelt building in 1989. You may also recognize the Rost Jewelry facade prior to a brief trip south. (Image: Library of Congress)