Manual High School students enjoy a picnic, courtesy of Stark and Wetzel meats. The plant, located as  west Ray Street went through a couple of different names after being sold in 1974. In 2004 Hebrew National closed their operation at the former plant. Today much of the site is gravel lot used for Colts parking. (Image: Indianapolis Marion County Public Library)

The end of May is quickly approaching, and for those who grew up in Indianapolis, thoughts of warm weather and race cars quickly come to mind. Most importantly, this month signifies the end of the school year! One of the most anticipated events during the waning days of the academic calendar was the release of the annual yearbook. Many hours were spent scribbling notes to friends and acquantainces, getting an autograph from your favorite teacher, or picking out pictures where you and your gang looked their best. If you were one of those who toiled away as a part of the yearbook staff, part of the job included obtaining advertising revenue from local businesses. Not only was this a good way to give back to the community, it also put your name in front of the eyeballs of a new generation of consumers. In the digital age the yearbook probably doesn’t resonate with the Class of 2015 as it did with the Class of 1955, sixty years ago. Here are some the hangouts and haunts that attempted to free our parents (or grandparents) of their hard-earned money. 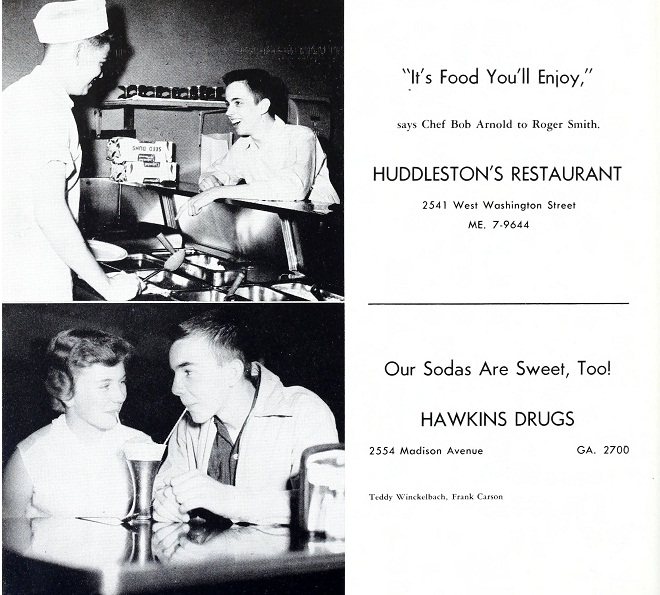 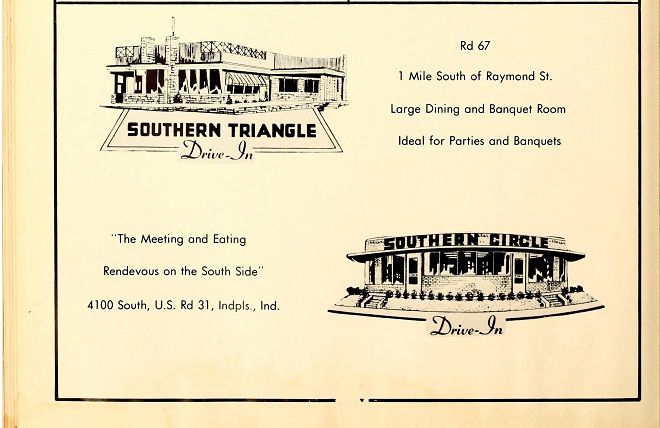 In 1953, Manual High School moved in to a brand new building near Garfield Park. The structure the school vacated near downtown became Harry E. Wood High. The renamed building focused on specialized vocational training for its twenty-five years of existence. The Southern Circle would have been a destination for students of both schools. Today Wood High School is is utilized by Eli Lilly. (Image: Indianapolis Public Library)

The Ritz Theater on the north side was a destination for Shortridge and Broad Ripple students in 1955. The building has not been used since the seventies after stints as a burlesque house and live music venue. Although the theater appears salvageable from the street, a look from above paints a different picture. (Image: Indianapolis Public Library)

Sorry Charley. The site of this restaurant was cleared in 1968 for the construction of the Indiana National Bank Tower, much to chagrin of these Broad Ripple students. (Image: Indianapolis Public Library) 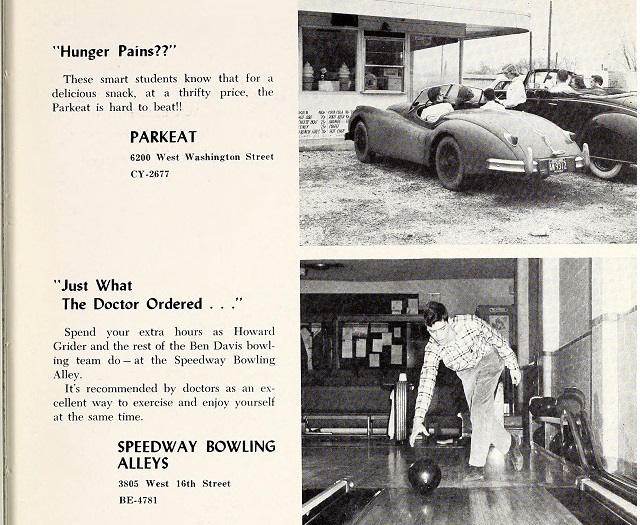 A 2015 Ben Davis Giant could bowl a few frames at the Western Bowl, located directly across from the street from the Parkeat restaurant without having to drive all the way to Speedway only to discover the Verizon Indycar Series offices now occupying the former Bowling Alley. (Image: Indianapolis Public Library)

Westlake Beach was a hub for summertime fun in the 1950’s and 1960’s. Today the lake is surrounded by apartments and bisected by Interstate 465. (Image: Indianapolis Public Library)