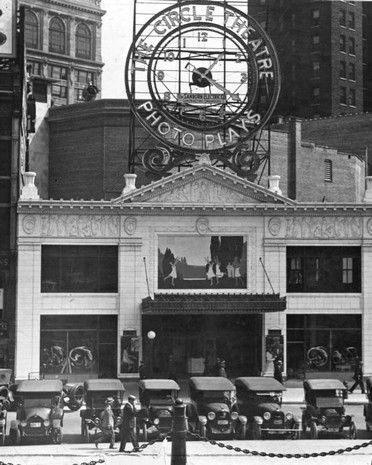 The Circle Theater appears much as it does today with the exception of the massive clock advertising “photo plays.” (Image: Indiana State Library)

On September 14, 2014,  The Indianapolis Symphony Orchestra will hold its opening night gala at the Hilbert Circle Theater. It looks to be a fantastic evening as renowned Polish conductor Maestro Krzysztof Urbański takes the podium to lead the symphony in selections from Tchaikovsky’s Swan Lake. Indianapolis is fortunate to still have access to a large-scale symphony, especially considering such is only enjoyed by 16 other cities in the U.S. The special and sophisticated aspect of Indianapolis culture has grown and developed over time to become a staple of the Indy arts community.

Considering as much, it’s sometimes hard to imagine the elegant setting of the symphony orchestra replaced with cowboys and Indians dueling it out on the silver screen to the delight of popcorn-munching patrons, but that was its life for over six decades.

The Circle Theater stands as the oldest surviving commercial structure on Monument Circle.  The theater opened in the summer of 1916, offering a live performances mixed in with “photo plays,” a term for early motion pictures. To bring a soundtrack to the era of silent film, a Hook and Hasting’s organ was installed, replaced in 1922 by a 15-rank Wurlitzer theater organ.

In 1927, The Jazz Singer starring Al Jolson brought in the era of talking pictures. The Circle Theater brought this amazing new technology to the citizens of Indianapolis, and for the next thirty years served as one the top venues in the city, hosting not only blockbuster films, but also live performances by some the top names of the big band era, including the Glenn Miller Orchestra.

The newer marquee covers the mural in 1968. The businesses adjacent to the entrance are Dr. David Tavel and Gillman Salon Shoes. (Image: Indiana State Library)

The theater seated over 2,700 patrons at its peak. Picture that the next time you are sitting in your local cinema! In the first half of the 20th century, movie theaters provided an entertaining diversion for the average person when options for entertainment were few and far between, and it definitely didn’t hurt that they were usually air-conditioned.

These cinema palaces were rendered obsolete in the years following the second World War. The Circle Theater limped along through the 1970’s, often relying on classics and film festivals, but unfortunately the proceeds from such screenings could not cover costs to maintain the aging structure.

The Indianapolis Symphony Orchestra stepped up by purchasing the building in 1982, and, after an extensive restoration, the organization moved downtown in 1984, where it remains to this day. Although the days of silent films are long over, the theater still hosts the occasional organ concert on a restored Wurlitzer installed in 2010.

Next time you’re there, close your eyes and imagine who’s “picture” you’d go see if you stepped back in time in Indianapolis. 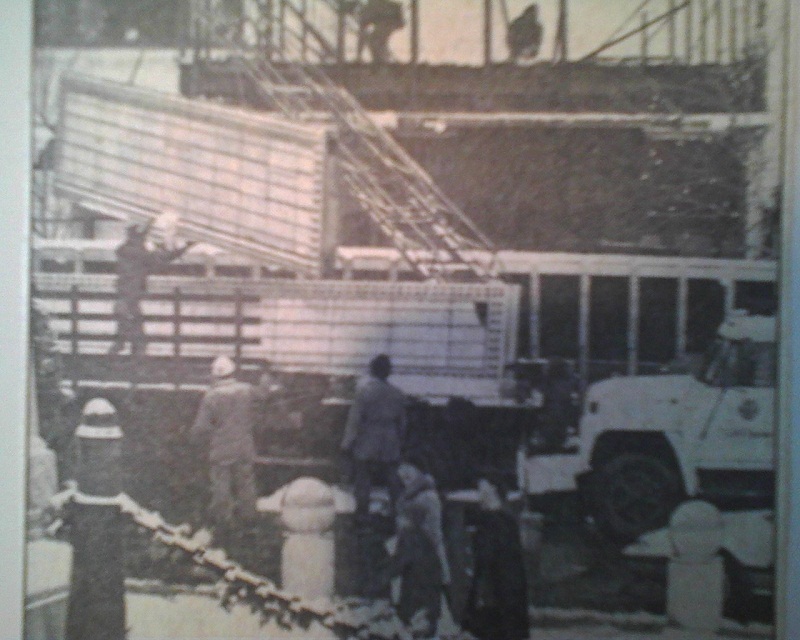 Workers dismantle the marquee in 1983 during the restoration. (Image: Indiana State Library)