Not many would picture fine French dining at a roadside motel as this ad from the 1960s boasted. (Image: Indiana State Library)

When Indy residents head out of the city on State Road 67 towards Vincennes, they may notice an aging sign advertising a French restaurant fronting a lonely vacant lot strewn with gravel and fallen trees. For recent additions to the area, it seems self-evident why classic French cuisine would not make it in this southwestern Marion County outpost. After all, the area today is still somewhat rural, and it would seem folks might feel more at ease downing comfort food at Gray Brothers Cafeteria, a little further down the road. Yet flocks of people made this trip for over fifty years to dine on escargot and other French favorites at Chez Jean Restaurant and Inn in Camby.

“Exciting restaurants with a well-known chef which feature creative and complex foods and emphasize various culinary techniques and a focus on seasonality. A highly trained dining room staff provides refined personal service and attention.” The definition for a Mobil four star restaurant. One has to travel to Illinois or Ohio to experience these days. (Image: Indiana State Library)

A twelve-room motel and restaurant serving up hamburgers and other dinner fare would not be anything remarkable in 1957. That changed when Jean Milesi purchased the unassuming property some twenty miles from downtown Indianapolis. Milesi, born and trained in France, spent the previous four years working with his brother in Louisville, Kentucky, learning the ins and outs of the American restaurant business. Along with his wife Barbara, they fashioned the motel into a destination. Patrons described the experience akin to being in the French countryside. The Milesis catered many a first date, anniversary, and high school French club outing for forty years, until retiring in 1997.

The story does not end here. Longtime family friend Chef Carl Huckaby purchased the facility from the Milesis. This brought the winner of the American Culinary Foundation’s 1996 “Chef of the Year” award to the kitchen of the establishment. Huckaby was able to keep the longstanding experience that customers expected, while adding to the menu. The operation expanded to include a bakery and deli on the south side of Indianapolis. 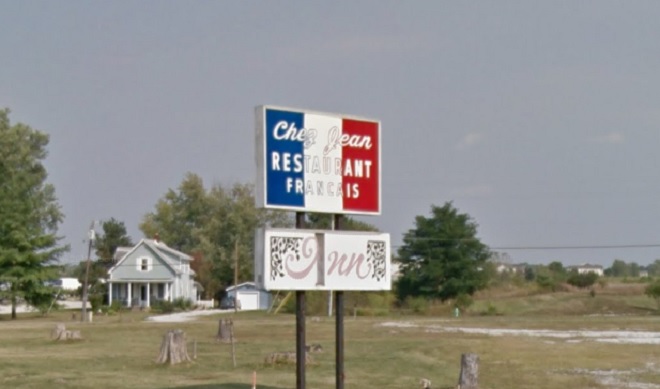 A weathered sign and the stumps of the pine trees that once surrounded the restaurant and inn are all that remain today. (Image: Google Images)

A myriad of circumstances undoubtedly contributed to the demise of the venerable restaurant. The formal experience and personalized service synonymous with traditional French cuisine had become a bit passé. As higher end restaurants with a more casual environment have sprouted up all over throughout recent years, the light dimmed on once sought-after destination restaurants. The collapse of the economy in 2008 was certainly no help to the profitability of the labor-intensive operation. The restaurant closed in 2009, just beating out the Chanteclair as the last traditional full service French dining option in the area. The final guests at the property were the Plainfield Fire Department, who burnt everything to the ground in a training exercise. Sadly, Chef Huckaby passed away in 2013. Today the sign remains in front of a vacant lot, waiting to be gobbled up by suburbia.

What have been some your favorite lost dining destinations over the years? And do you have a favorite nationality of cuisine?

At Your Leisure: Sorry, No Ladies Allowed