Indianapolis is a ‘meat and potatoes’ type of town. That tends to happen when you’re located some 600 miles from the nearest coastline. That’s why it’s not too hard to see why many of the most popular restaurants tend to be purveyors of USDA Prime. Several more steakhouses are ready to come online soon, one may rightly be concerned that the city may succumb to meat-induced cardiac arrest. The steak market in Indy has had a number of favorites come and go over the years. One sentimental favorite had the chops to last half of a century on the near south side. 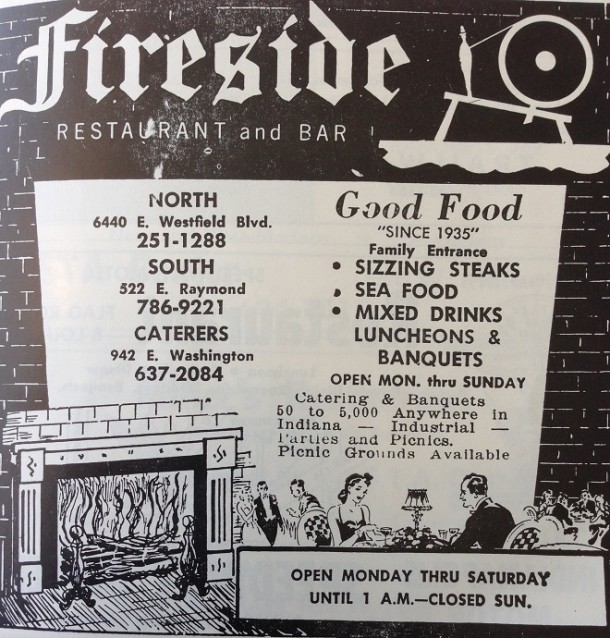 The name “Fireside” evokes images of a cozy and romantic evening. This is what generations of diners experienced at the restaurant on east Raymond Street, commonly referred to as Fireside South. The restaurant opened in 1946 under the management of brothers Herb and Earnest Hohlt. Steak was the specialty of the house, and many former customers reminisce about the sizzling sound the entrées made as they were carried from the kitchen into the expansive dining room.

Other popular items included prime rib, pork, chops, and French-fried lobster tail, all served with warm garlic bread. The restaurant also specialized in a frozen Brandy Alexanders for those wishing to imbibe in a nightcap. Success spelled expansion, and a second location was built at 6440 Westfield Boulevard. The “Fireside North” only lasted a few years; it closed around 1964. The building housed American Legion Post 34 for decades, until recently, when the property came up for redevelopment. 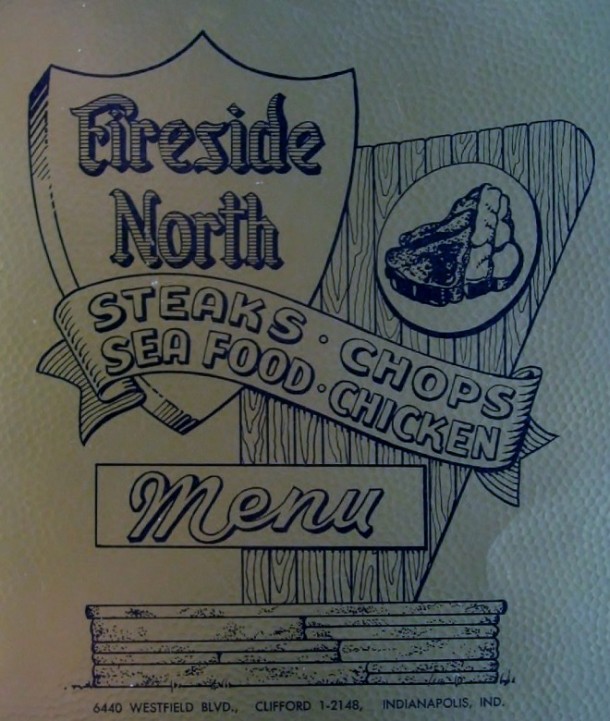 A rare menu cover from the short-lived north location. According to city directories it seems the location operated between 1960 and 1964. (Image: eBay)

The south location remained popular throughout the following decades. In 1985, a brief attempt at ‘dinner and a helicopter ride’ launched at the new Indianapolis Heliport, reportedly featuring the Fireside steaks.

By 1989, Herb Hohlt was ready for retirement and turned the reigns over to nephew Andy for another twenty-year run. Over time, Raymond Street had been widened to the point of abutting the restaurant’s doorway, making access difficult. This, coupled with a residential location with few other entertainment options, spelled the end of Fireside in 2006.

Closing aside, the Hohlt family didn’t stay out of the restaurant business for long. In 2009, Andy opened Sammy’s Pizza in Greenwood, keeping alive their tradition of a family-run restaurant on the south side. The former restaurant location on Raymond Street stands vacant today — and listed for sale, just in case anyone is looking to revive a lost tradition. 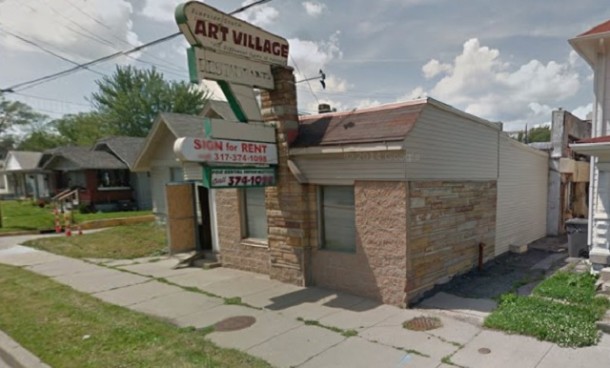 Want to buy an old restaurant? The Fireside South is for sale after brief stints as an art supplier and an empanada producer.