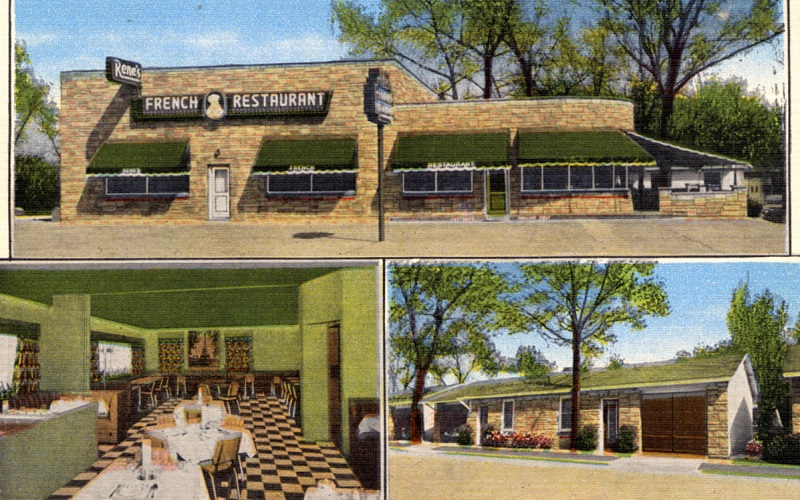 What comes to mind when you think of French cuisine? Could it be an elegant dining room with tables draped in white adorned with intricate place settings? Perhaps an image of meals served with loaves of warm, crusty bread and an endless parade of wine pairings? Or could it be a plethora of glistening meat, game and fish coated in flavorful sauces whisked to perfection by chefs wearing the old uniform of all white, capped with tall white hats?

Whatever comes to mind, if it involves Indianapolis, it must be a memory from long ago. The city no longer boasts one of these stereotypical French restaurants, but this was not always the case. In fact, one of the first examples of French dining appeared at a small roadside motel on West Washington Street and was known as Rene’s French Restaurant.

Today’s subject is not to be confused with Rene’s French Bakery in Broad Ripple or any earlier incarnations. Rene’s French Restaurant was on U.S. 40, just east of Lynhurst Drive and lasted approximately from the early 1950’s until 1963. The restaurant fronted a small lodging operation known as the Eaton Motel. This would have been a magnifique location, as U.S. 40 was the bustling east-west route prior to construction of Interstate 70.

Does a review of this “board of fair” look appetizing to you? And where are the dishes like Escargots and Boeuf Bourguignon?  Were liver and onions and ham steak the height of French cuisine at the time? 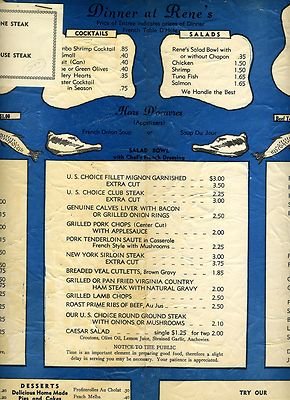 Indianapolis finally did receive her high end French restaurants. La Tour operated atop the Indiana National Bank Building throughout the seventies and featured a young Wolfgang Puck. Many can remember romantic evenings at The Chanteclair, which operated at the top of the airport Holiday Inn until 2008. Around this time, the venerable Chez Jean on Kentucky Avenue gave in to sagging demand as well.

It’s unclear what lead to the restaurant’s demise, but at least, if you’re feeling nostalgic, you may take solace in the current menu at MCL, where you may find a number of the offerings from the above menu.

Today the site of Rene’s remains as only a parking lot bordered by an AT &T building and a Fazoli’s location.

Do you remember Rene’s or any other French restaurants in Indianapolis? Please share your reminisces and reviews with us!