Today’s visitors to the Circle City have a wide array of lodging options when looking for a place to spend the night. The downtown area boasts thousands of modern hotel rooms that attract celebrities, athletes and politicians. While Indy may not have a landmark hotel like Chicago’s Palmer House or New York City’s Waldorf-Astoria, an early example in the city’s lodging heritage still stands among the busy intersection of Meridian Street and Fall Creek Parkway. While they no longer take guests on a nightly basis, the Marott Apartments provide housing to hundreds of city dwellers. While commuters zip by the imposing structure regularly, they may not realize that this former hotel claims some of Indy’s most important visitors slept here. 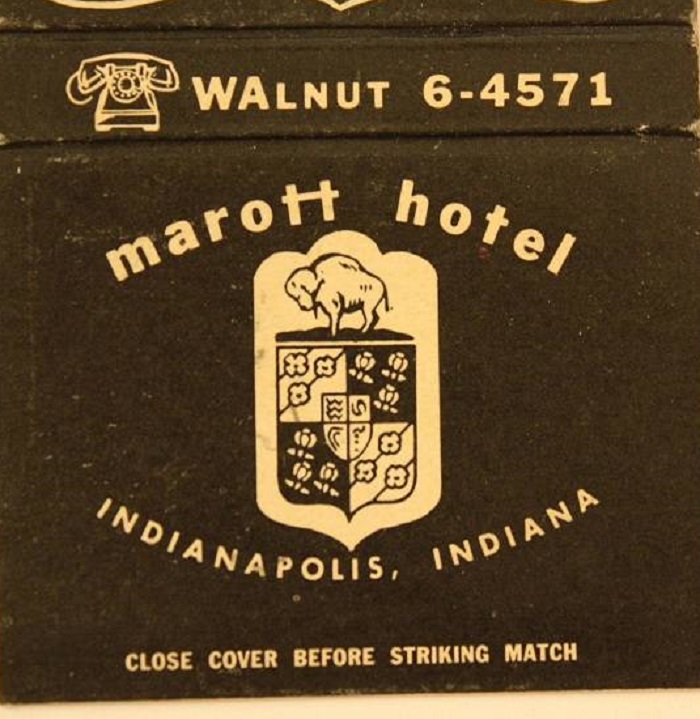 This matchbook cover indicates the old two letter telephone exchange numbering pattern. WAlnut seems to have covered the areas around Fall Creek on the northeast side. This system was phased out beginning in 1958. (Image: eBay)

The Marott Apartment Hotel began serving Indy visitors and residents in November 1926. The property was developed by a prominent retailer of the time. Featuring two identical ten-story brick towers under its distinctive neon sign, the property featured a pharmacy, restaurant, billiard and card rooms, deli, beauty salon and on-site laundry service. There is, however, no mention of the cocktail lounge, that would come later, since the building’s debut occurred during prohibition. 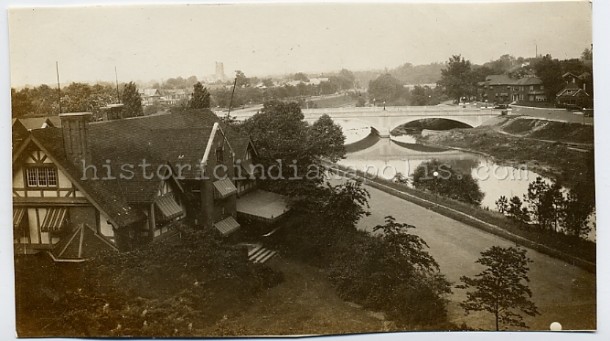 Early view of the former (and first) Governor’s Mansion from The Marott.

Along with providing luxurious amenities, the Marott may attribute part of its cache to location, location, location. The building sat next door to the first designated Governor’s Mansion since the failed and oft-noted one on the circle, making it a go-to place for hosting political fundraisers and other social engagements. If you were a celebrity visiting Indianapolis during the its heyday, there is little question of your first choice of lodging. Famous folks who signed a registration card at the Marott include Clark Gable, Winston Churchill, John F. Kennedy, Jane Mansfield, and Paul Newman. 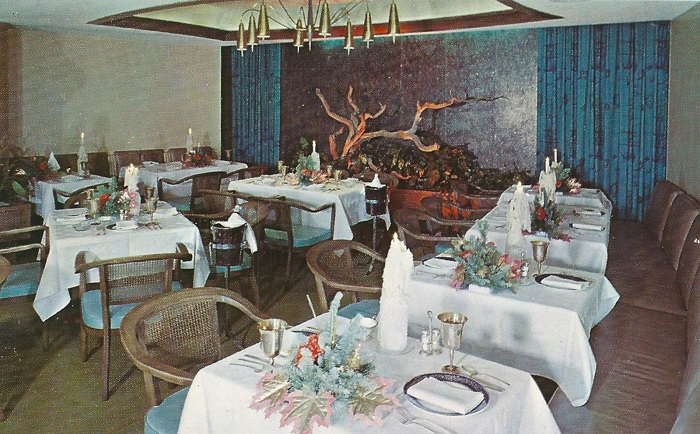 The Driftwood Room Restaurant, a late addition to the Marott, could not restore the hotel to its former glory. (Image: Evan Finch)

Eventually, the hotel’s appeal eventually faded. George J. Marott passed away in 1946 and the hotel went through a series of owners, each desperately trying to hold onto the allure of the past with additions such as: an above ground swimming pool, dining rooms, and expanded parking lots where spacious lawns and gardens once existed. None of those additions could overcome the change in tastes and decline in popularity of the surrounding area.

The once-grand apartment hotel remained an eyesore at one of the city’s busiest intersections for only two years. Investors poured more than 16 million dollars into the building, restoring the former gem into more than 200 apartments. Current day residents can enjoy amenities such as: an indoor pool, coffee shop, business center and concierge. According to the list on their website, some high profile guests in more recent years have included: Eric Dickerson, Reggie Miller,  Evan Bayh, and the late Governor Frank O’Bannon.

Can you think of a place and time where you may have had a chance to rub elbows with movers and shakers of the Circle City?