The first buildings that always stuck out when driving into Indianapolis in the 1980s and 1990s were the two large domed structures that hosted our professional sports franchises. Surprisingly enough, if one stumbles across a photograph of Indianapolis from the end of the nineteenth century or beginning of the twentieth century, another dome hovered majestically above the cityscape. The building belonged to an attraction known as the Indianapolis Cyclorama.

It’s hard to imagine constructing a building for the sole purpose of housing a single mural, but that is precisely what happened in 1888, just a few hundred feet east of the Indiana Statehouse. Moving pictures were still nearly two decades away, and home entertainment options were limited to a good book. The public was eager for distractions, and thus came the Cyclorama fad of the late nineteenth century. The concept was quite simple; a team of artists would work on a gigantic canvas to recreate a historical event, usually a famous battle or religious scene. The painting would then go on a nationwide tour. Major cities built large circular buildings so that the artwork could be displayed in a manner that allowed patrons to have a 360-degree view. The intent was to have different works of art rotate throughout the year to keep the paying customers interested. 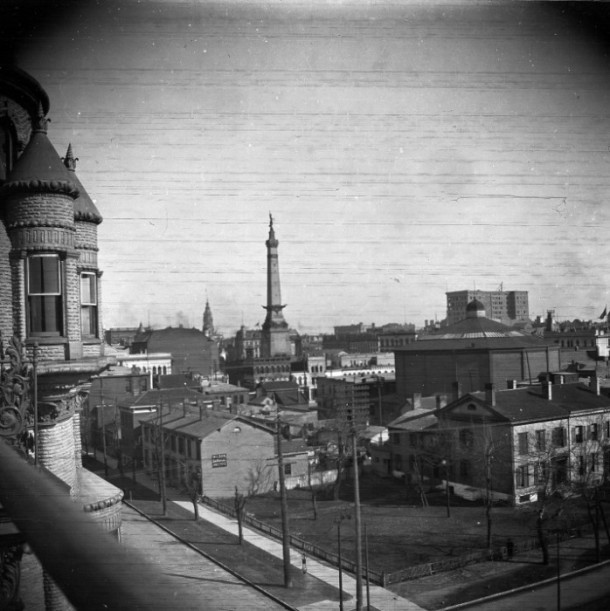 View looking southeast shows the Cyclorama. The taller building in the distance behind it was the Thomas Building, site of the 1912 Merchants Bank Building, now Barnes and Thornburg.      (Image: Herman List Collection, Indiana Historical Society)

A Civil War scene was the most famous painting displayed in Indianapolis. The Battle of Atlanta, painted in Milwaukee in 1885 and 1886, under the direction of German artist William Wehner, went on public display in 1888. An excruciating amount of detail went into the creation of this artwork. A team of artists traveled to Atlanta, Georgia to observe the site of the battle from a large wooden tower. Civil War veterans and area residents came by the site to recreate scenes and provide their memories of the actual events. The Battle of Atlanta arrived in Indianapolis after stops in Detroit and Minneapolis. This became its last stop. Financial difficulties plagued Wehner, and ownership was relinquished to the Miler family, who owned the site of the Cyclorama. The painting remained on display until 1892. 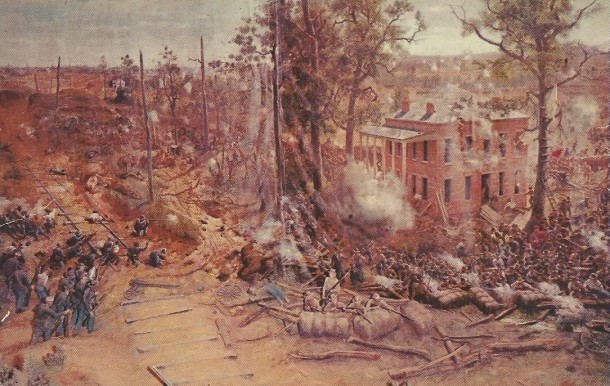 A portion of The Battle of Atlanta that once hung in the Cyclorama. (Image: eBay)

The cyclorama fad ended by the 1890s, and the city was then blessed with a white elephant of a building. Other uses were attempted. Exhibitions staged under the domed roof  included a demonstration of an early automobile. The final use, of all things, was a wild animal exhibit put on by Englishman Frank Bostock. Some brief searching indicates that this was probably not the most humane type of operation. In 1903, the strange building found itself in the path of a speeding train, as the site became home to the Indianapolis Traction Terminal, but thankfully not all was lost. Hoosiers escaping the cold winter weather who pass through Atlanta, Georgia can stop by Grant Park and view Wehner’s “Battle of Atlanta” on display in a modern day cyclorama.

What have been some of the most memorable traveling exhibits that you have witnessed over the years?

The Battle of Atlanta, Terrell Publishing, 1991