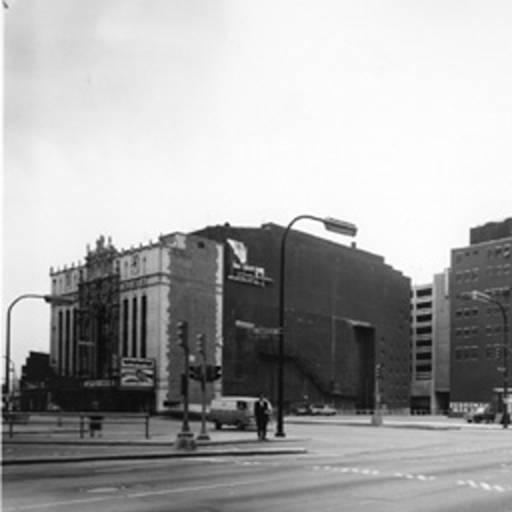 Like a smile with a missing tooth, the former site of the Claypool remained a vacant lot for over a decade. (Image: Bass Photo Company Collection, Indiana Historical Society)

It would be unusual for a hotel to advertise that “*fill in the blank famous person* died here.” However, when tragedies occur, the general public tends to have a long memory, perhaps sharing in whispered tones what infamous activity happened within its walls. If the event were grave enough, it could send a place into ruin. Perhaps distressing events of the past contributed to the decline and eventual downfall of the Claypool Hotel? You be the judge. Beginning in 1943, a series of high-profile crimes and a large fire occurred in the hotel, casting a dark shadow over the famed property.

The first incident took place on August 28, 1943, during the height of World War II. Maoma L. Ridings, a 33-year-old woman from Warm Springs, Georgia, was serving in the Women’s Army Corps at Camp Atterbury, when she headed to Indianapolis for a date. The evening came to an horrific end. Around 8 p.m., a hotel maid discovered Ridings’ body in Room 729, evidently murdered, with a broken bottle of whiskey. Police searched for an elusive woman dressed in black, the last person spotted with Ridings earlier in the evening.  Although many leads were pursued, the crime remains a cold case to this day.

Just over a decade later, tragedy struck again. In July 1954, Dorothy Poore, an eighteen-year-old woman from Clinton, Indiana, came to Indianapolis seeking employment in civil services. Though not a registered guest of the hotel, she spent her last night there. Her body was found in a sixth floor room, stuffed into a dresser drawer. The room was registered to a man named Jack O’Shea. Using finger prints and handwriting samples, police discovered this was an alias of Victor Lively, registered at another area hotel under that name. He was not to be found in Indianapolis. Police arrested him near St. Louis, Missouri, on July 23.  He was found guilty of murder on December 2, 1954, giving Poore’s family the closure that the Ridings family never received. 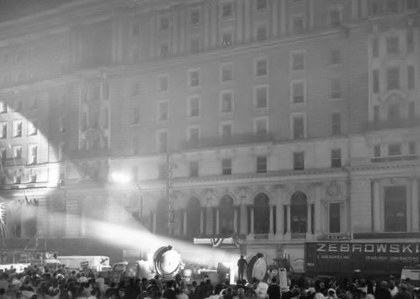 A large gala was held in 1969 on the eve of the impending Claypool demolition. The Zebrowski sign refers to Ed Zebrowski, whose company was responsible for the destruction of many Indianapolis landmarks including the Marion County Courthouse, Maennerchor Hall, and Knights of Pythias Building. (Image: Indiana State Library)

In January 1963, a local newspaper noted the incumbent completion of a number of recent renovations over the prior three years. An “overhaul and remodeling,” of the lobby was noted. In 1967, another $200,000 had been spent renovating rooms, and the exterior was sandblasted to brighten the facade. The effort was in vain. In the early morning hours of June 23, fire broke out in a utility closet on the fourth floor. The conflagration, most likely caused by a carelessly discarded cigarette, smoldered for hours before being discovered. Over 300 guests were evacuated, including the Tacoma Cubs AAA baseball team and the Fraternal Order of Eagles, hosting their convention in town. Although the fire was confined to the utility area between the fourth and fifth floors, heavy water damage from the firefighting efforts flooded the lobby and rendered more than 80 rooms unusable.

On July 1, Walter A. Evans, a 63-year old janitor from Bakersfield, California was charged with first-degree arson for the fire, noting there had been two other downtown hotel fires caused by the same man. At the time, the hotel was expected to be closed until September 1 for repairs.

Representatives of the National Hotel Company of Galveston, Texas acquired the hotel in 1943 and in February of 1969, they dangled the possibility that the hotel might survive, with a news headline touting “Claypool Hotel Remodeling Seen as Probable.” This, despite the concurrent fire sale on hotel furnishings.

The hotel continued to function as the Republican Party headquarters. Making it even more odd that Democrat Eugene McCarthy briefly took over most of the mezzanine and main floors as his campaign headquarters in April 1968, while vying against Robert F. Kennedy for the primary. Kennedy took over three floors of the Indiana Theater building, with additional rooms at the Marott Hotel, and the 11th floor of the Sheraton. The Riley Room, unused for 10 months was transformed into a babysitting hub for mothers volunteering for the McCarthy campaign.

Rather than restore the famed 65-year old hotel, the owners opted to close the building in hopes of developing a new hotel on the site. Legal problems caused by first-floor retail tenants delayed demolition for another two years. An attempt to redevelop the site in the late 1970s included a Radisson Hotel, but nothing came of it. Finally, anticipating a downtown revival, Simon Property Group constructed Claypool Court on the historic site. The project included restaurants and retail outlets on the lower floors and a high-rise Embassy Suites Hotel.

What memories do you have of The Claypool Hotel? 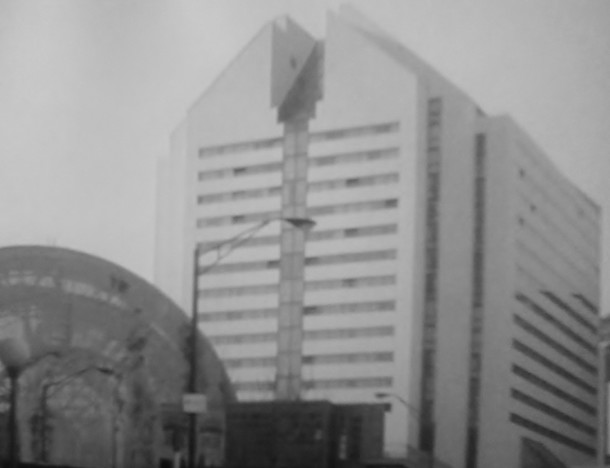