This weekend, the month of May heats up at the Indianapolis Motor Speedway. For the second straight year, fans will be treated to the Angie’s List Grand Prix as a precursor to the ninety-ninth running of The Indianapolis 500. The race will feature many of the same drivers and teams who will participate in The Indianapolis 500. Traditionalists who have grown up with the Speedway in May might balk at the idea of seeing cars running clockwise around the famed oval while navigating the twisting turns of the infield road course. Did you know that this is not the first time Indy cars have taken to a road course in central Indiana, and that earlier attempts helped solidify the careers of some of the most famous drivers in auto racing history?

Located just seven miles west of the Indianapolis Motor Speedway, Indianapolis Raceway Park was the brainchild of fifteen area investors who wanted to create a two-and-one-half mile road course. The first Hoosier Grand Prix, held in 1961, welcomed sports cars to the new facility. Few fans were interested. Taking a year off in 1964, promoters went back to the drawing board.  They invited the Champ Car division of the United States Auto Club, also known as “Indy Cars,”  to compete in July of 1965, hoping to bring in fans who might be unable to obtain tickets for the more famous event in May. 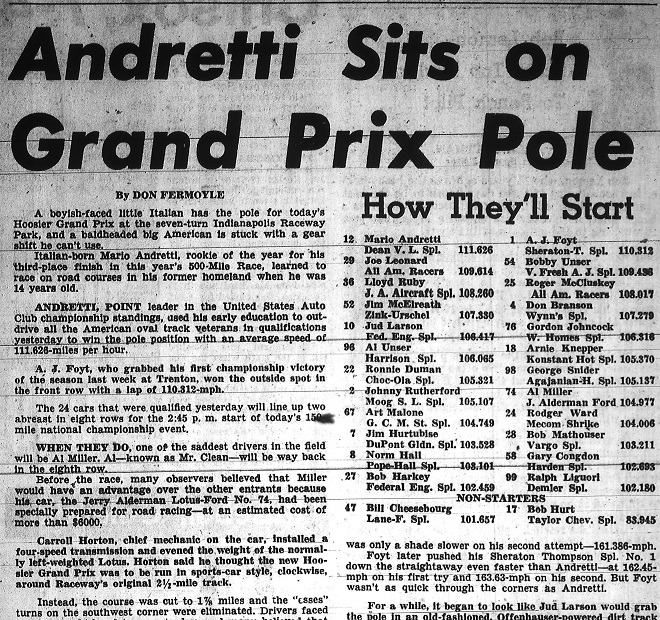 This shows the results of the twenty four qualifiers for the 1965 Hoosier Grand Prix. (Image: Indiana State Library)

Despite being right down the road from the Mecca of motor sports, the reformatted Hoosier Grand Prix was destined for failure. Throughout the Fifties and Sixties, Indy Cars raced exclusively on a handful of both paved and dirt oval tracks. The first attempt at this completely different genre of racing proved a bit much for the equipment of the day, which was set up primarily to turn left while utilizing a primitive two-speed transmission. As a result, a section of the track was omitted at the last minute, creating a one-and-seven-eighths mile course with only one right turn. Promoters were still ambitious for the event, anticipating crowds in excess of 20,000 coming to see the cars and stars of the Indy 500. This did not come to pass, and crowds never topped 10,000. The last checkered flag dropped on the Grand Prix in 1970.

One had to flip deep into the July 26th edition of the Indianapolis Times to find out who won the Hoosier Grand Prix. The small picture of Andretti dwarfs the bigger headline about a crash involving California racer Norm Hall. (Image: Indiana State Museum)

Even with the lack of attention, one of the most famous drivers in auto racing history can claim his first major win at the Hoosier Grand Prix. After an eleventh place points finish as a rookie in 1964, Mario Andretti won his first Indy Car race at the Hoosier Grand Prix in 1965. He finished third in the Indy 500 in May, earlier that year. Although this was his lone victory of the 1965 season, a series of top four finishes enabled Andretti to become the youngest series champion at age twenty-five. Mario became a racing legend and today remains the only driver to win the Indianapolis 500, Daytona 500, and Formula One World Championship. Another Indy legend saw success at Raceway Park. To help increase fan interest, twin races were scheduled in 1968. Al Unser swept both. He would win the final race in 1970. Al Unser remains one of three drivers to win the Indy 500 four times prior to his retirement in 1993. 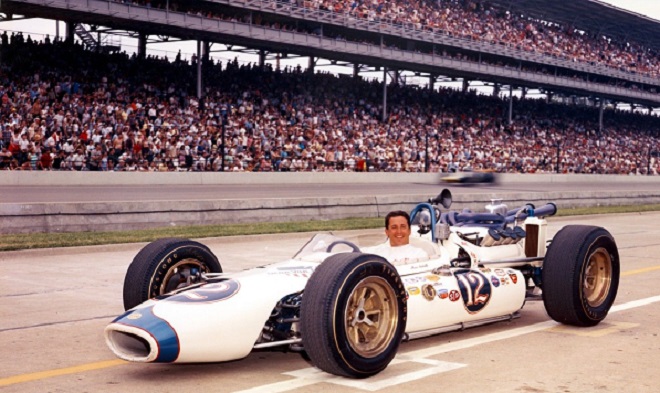 A young Mario Andretti poses in his number 12 Ford after qualifying for the 1965 Indianapolis 500. This would be the car that would win the Hoosier Grand Prix two months later. The following year Andretti would sport the number 1 in honor of his series championship in ’65. (Image: eBay)

Today Indianapolis Raceway Park (now known as Lucas Oil Raceway) is known mostly for the U.S. National drag races held each September. Although the road course remains intact, safety concerns prevent it from being used for major competition. Road racing has since caught on, as this weekend’s event hopes to draw some 50,000 fans who mostly are unaware that the its roots can be traced back fifty years prior. Maybe a young driver will start a legendary career by claiming a victory.

Was anybody one of the few to witness the Hoosier Grand Prix? 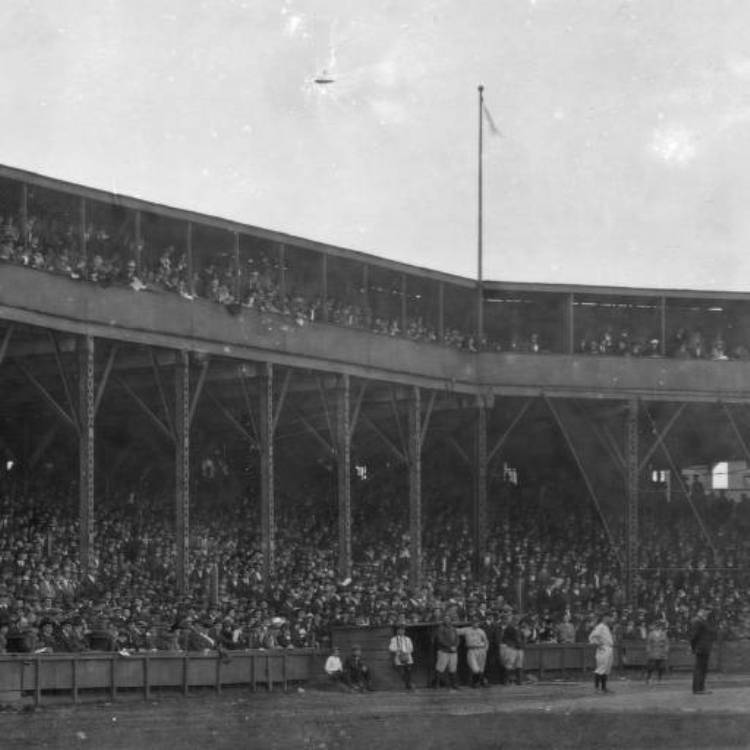 At Your Leisure: An Evening in Merry England