The Scottish Rite Cathedral looms large on the northern fringes of downtown. Aside from the towering neo-Gothic architecture, a primary reason for its great presence is the existence of vast parking lots surrounding the building. Things were not always this way. A nine-story hotel served as a neighbor to the north for nearly fifty years, featuring some famous and infamous milestones throughout its life. 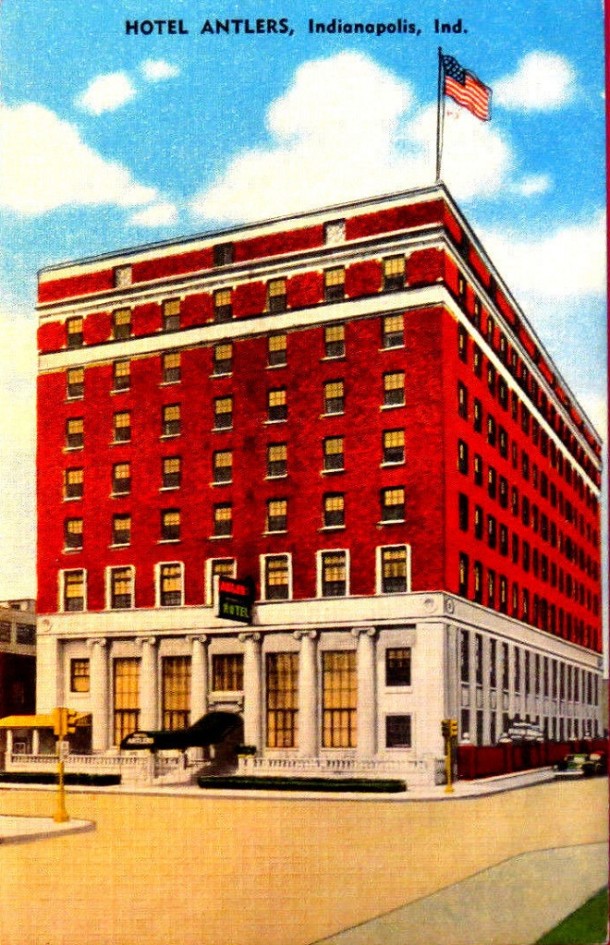 Although not nearly as grand as better known hotels at the time, The Hotel Antlers had a towering presence over Meridian Street. (Image: eBay)

The Hotel Antlers seems like a strange name but makes perfect sense knowing the building’s history. The 1920s were a booming time for private clubs downtown. Nearly everyone is familiar with the Columbia and (former) Athletic  Clubs, which built lavish downtown facilities during the era. Stepping up to the plate as well were the Benevolent and Protective Order of Elks.  In 1924, they erected a nine-story club on the southwest corner of Meridian and Saint Clair Streets. Like the aforementioned clubs, the new building featured 200 hotel rooms. The name made reference to the headgear of the club’s namesake. 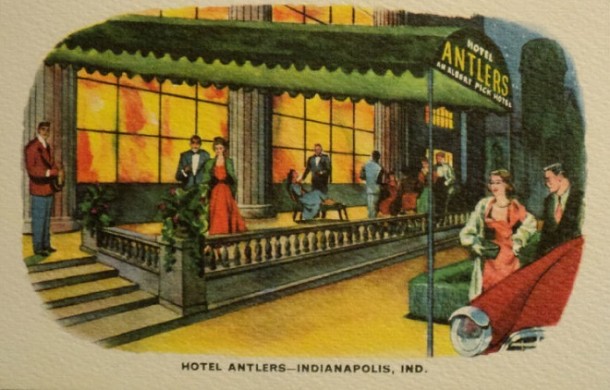 This 1940 Postcard shows a swanky crowd arriving at The Hotel Antlers. (Image: eBay)

The hotel went through several different owners over time but was probably best known as a part of the Albert Pick Chain during the 1930s through the early 1960s. During this era, the hotel became the site of the first public exhibition of television in the city. The Pick collection of  hotels consisted of twenty-three properties stretching from New York to Kansas City. They were largely sold off during the 1960s, as age and declining locales became problematic. 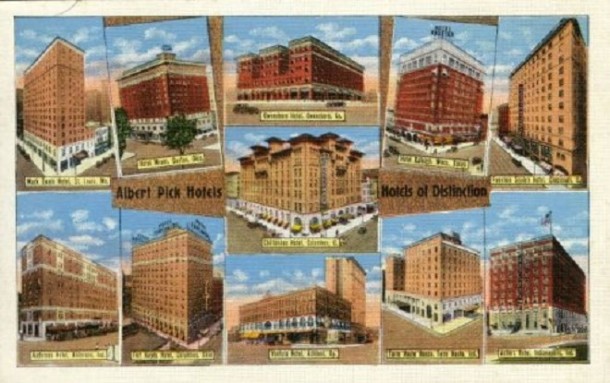 The Albert Pick Hotels of Distinction. The Hotel Antlers is in the lower right. (Image: Amazon)

One doesn’t often think of mid-century Indianapolis as a center of organized crime, but it had its share of shady characters. The Mitchell family, headed by Isaac “Tuffy” Mitchell, ran a numbers racket and illegal gambling operations at various locations, including The Pink Poodle and Carousel Club from the 1930s through the 1970s.  Morrie Mitchell began an illegal gaming club at The Hotel Antlers in 1967. This lasted until an FBI raid in 1970. The raid was never publicly tied to the Mitchell family, who had become intertwined with Republican Party Chairman L. Keith Bulen.

This ad from the 1964 City Directory highlights the features of the Hotel Antlers. (Image: Indiana State Library)

The end of The Hotel Antlers came a few years later, according to The Indianapolis News: “The 50-year-old Antlers Hotel is rapidly disappearing from the scene at Meridian and St. Clair. The 186-room structure was built in 1924 by Indiana Elks and was operated by a number of owners before closing in 1969. The Meridian-St. Clair Realty Co., the current owner, says there are no definite plans for the site after demolition is completed.”  Forty years later, it seems that there still are no definite plans.