This is a patch that a Frisch’s carhop would have worn during the Fifties and Sixties.
(Image: eBay)

Some sizable restaurant news hit this past fall. The CEO of the Atlanta-based company that bought the iconic Frisch’s Big Boy chain of family restaurants announced bold intentions to expand throughout the Circle City. While some may roll their eyes at yet another out-of-state chain eatery setting its sights on our seemingly ever-expanding waist lines, this is hardly the first run-in we’ve had from the giant burger wielding caricature who stands guard in front of every location. Many can recall two failed attempts the Cincinnati institution made on cornering the Indy burger market.

Frisch’s can trace its roots back to 1939, when David Frisch purchased the Mainliner restaurant in Fairfax, Ohio, after a failed attempt at running a family restaurant. This restaurant was the first drive-in in Ohio and featured seating for a mere eight customers but could offer curb service to some sixty cars. After meeting with another restaurateur by the name of Bob Wian, who gave Frisch exclusive rights to market his “Big Boy” hamburger throughout the Midwest and Southeast. In 1947, Frisch’s Big Boy was established and quickly grew to 170 restaurants! 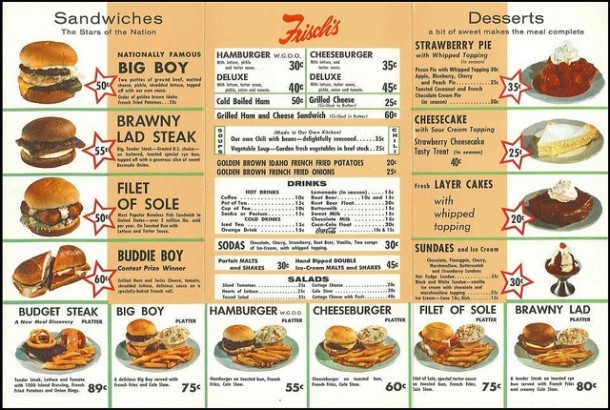 A sampling of Frisch’s board of fare circa 1959. (Image: Amazon)

Growth in Indianapolis came fast and furious. Between 1958 and 1963, Frisch’s grew to fourteen locations. This was second only to local favorite Burger Chef in regards to number of locations. City locations included 2411 West 16th, 2201 Broad Ripple, Eagledale Plaza, 2054 North Meridian Street, 1142 Shelby Street, Southern Plaza, and Irvington. A downtown location in the Illinois Building served up hungry businessmen and shoppers. The location at 4189 North Keystone recently served as the longtime home of Murphy’s Steakhouse. Outside of the city, there were locations in Speedway, Lawrence, and Augusta. In 1962, the emerging chain took over the popular Northwood Drive-in on North Meridian Street. Perhaps this rapid expansion oversaturated the market, or maybe the corporate management wanted to focus on its core market of Cincinnati. Little was written about the sudden departure of the restaurant chain in 1970. All of the stores were either repurposed or demolished. 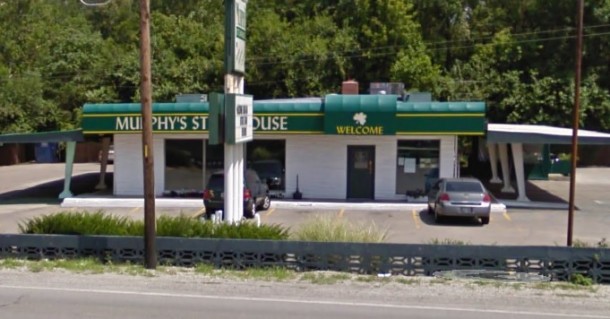 The Keystone Avenue Frisch’s building is one of two remaining original Big Boy restaurants in Indianapolis. Its future may be in doubt, as long-term occupant Murphy’s Steakhouse bolted for higher ground before the Keystone-Fall Creek Bridge replacement disrupted traffic. (Image: Google Images)

Frisch’s second stint in the Indianapolis area came about in 1988, when a new store in Plainfield opened just off of Interstate 70. Through the early 90’s, ten other area locations set up shop in suburban locations. This next generation of restaurants was decidedly different from their 60’s counterparts. Gone were the drive-in canopies and car hops, replaced by the ever-so-convenient drive-through window. Large, brightly lit dining rooms featured a soup and salad bar to entice diners. This new incarnation proved to have the staying power of the previous ones, as the company closed all area stores without warning in July of 1997. 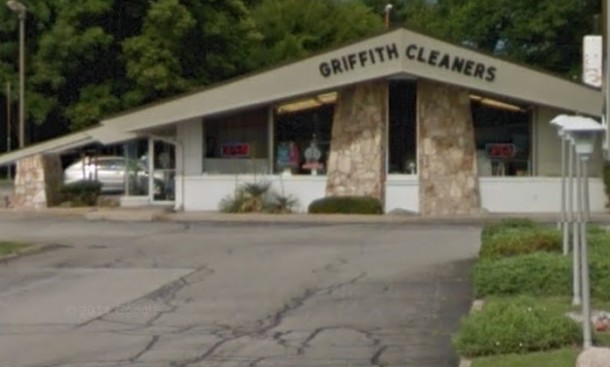 The Augusta location near 71st Street and Michigan Road now serves as a dry cleaners.

Time will tell if the third time will be the charm for this otherwise successful operation in Indy. Until then, you can always get your Frisch’s fix at a holdout franchise in Anderson. What are some of your memories of this on-again, off-again relationship?