The rooms and lobby appear to be very well appointed for 1960s standards. (Image: eBay)

When enjoying a spring day on the War Memorial Mall, it is easy to become mesmerized by the vast island of green space in the middle of the city. Stretching for five blocks, this oasis is surrounded by various high and mid-rise buildings that create what appears to be a miniature Central Park, when observed from a high vantage point. Unfortunately there are some missing teeth in what should be a continuous wall of buildings surrounding the park. One of the more bothersome gaps occurs at the intersection of Pennsylvania and Vermont Streets, in an area where numerous buildings have been restored as upper end apartments and condominiums. When looking at the history of this site, it’s easy to get more irritated, as this was home to high-rise luxurious accommodations for visitors and even played a role in “Beatlemania” in 1964.

This matchbook seems to incorporate University Park as the main selling point for the property. (Image: eBay)

The Essex House Hotel was not what many would consider a beautiful building. Rising 14 stories in an H shape of buff colored brick and square-paned windows, the building closely resembled a college dorm or public housing project. That does not mean that it was not considered the height of luxury upon its opening in 1952. When originally completed, the property was of mixed use, offering not only hotel rooms, but also apartments, a restaurant, cocktail lounge, and banquet space.

The hotel was prominent enough to be rumored as the home of The Beatles during their 1964 visit, causing fans to mob the downtown hotel as the Fab Four rested quietly at the Speedway Motel. Looking for an updated look, The Essex House was renovated in 1971, adding Arabic inspired arches around the ground floor, eventually making the building appear even stranger. By the 1980s, the aging structure was converted exclusively to apartments that catered to a transient clientele. 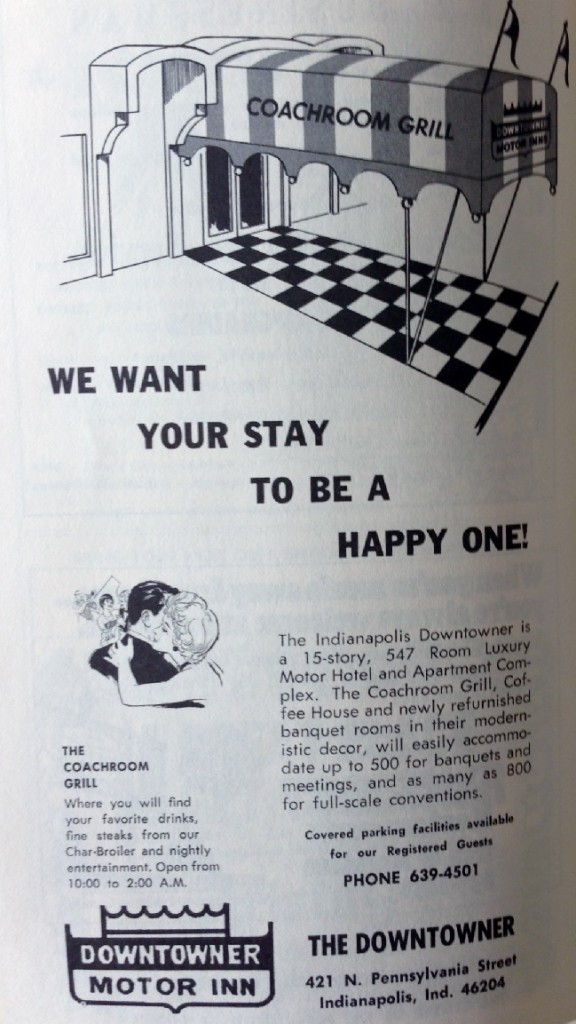 By 1971 the hotel was part of the Downtowner Motor Inn chain. At over 500 rooms this would be the largest hotel in the city. (Image: Indiana State Library)

The Essex House holds the dubious distinction of being the newest high-rise building ever to be demolished in Indianapolis. An affiliate of Cincinnati-based Parking Company of America purchased the building in 1994, clearly with no intention of operating apartments. They demolished the building in October of that same year to construct a parking lot. The agreement with the city gave the company a five-year window to operate this lot on this prominent corner. Unfortunately through extensions, the parking lot remains. A denied extension in 2007 resulted in a lawsuit in which a Marion County Superior Court Judge ruled in favor of the out-of-state owners, citing a “chronic shortage of parking in the area.” Maybe if the Essex House could have held on a few more years, we would be looking at a restored high-rise today full of new residents.

As another parking agreement expires, what would you like to see on this prominent corner?

It’s difficult to find an exterior picture of the Essex House, perhaps for good reason. Here you can see the building in all its college dorm greatness in the foreground of Reilly Towers. (Image: Amazon)