Twenty Indiana-built cars and trucks plus almost 100 people gathered around the south side of University Park for the departure of Indiana Automobile Manufacturers’ Association Indiana-Pacific Tour on July 1, 1913.  At that time, the IAMA Tour was one of the largest transcontinental tours attempted in the United States.  Planning for this 3,600 mile trek took over eight months to coordinate all the logistics for the 20 vehicle caravan from Indianapolis to Los Angeles.

The trek was more than an adventure.  It was making history.  At the time, most travel was in urban areas with nicely paved streets.  Otherwise, the odds were that a motorist would get mired in the deep ruts of the rural dirt roads. 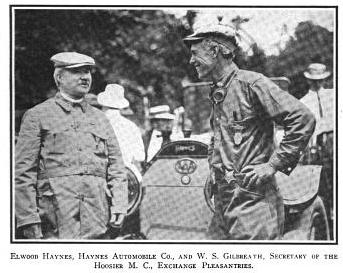 The auto industry would only grow when travel by road was made easier. But, investment in roads would only occur when people showed more interest in the automobile industry. IAMA members envisioned a way to help make that happen—a cross country tour to build the country’s interest in automobiles, particularly Indiana’s products, and better roads.

At 2 pm on July 1, More than 70 people in the caravan stood ready to head west. The tour would take 34 days to cover the 3,600 miles and allow for propaganda work and sociability. They would pass through Indiana, Illinois, Missouri, Kansas, Colorado, Utah, Nevada, and California.

The Lincoln Highway sponsored Marmon was one of the tour participants that made it to California. Left to Right: Capt. Robert Tyndall, Carl G. Fisher, Charles A. Bookwalter, and Heine Scholler.

They lined up for the start and the heavens christened participants with a thunderstorm.  “How Dry I Am” was the band’s selection as the tourists broke out the side curtains and raised windshields to keep out the driving rain. They finally departed University Park in a heavy rainstorm.

As the rain poured down, the tourists were accompanied by the truck-mounted brass band.

Nearly 100 filled the cars, including escorts, that traveled down Meridian Street, around Monument Circle to Washington Street and then west on to the State Capitol—yet another stop before leaving Indianapolis.

Leaving the Capitol, departure was marked at one minute intervals by the booming of a cannon in the hands of Battery A, Indiana’s crack artillery company. The tourists proceeded south on Senate Avenue to Kentucky Avenue, southwest to Oliver Avenue, then on to River Avenue, right on Morris Street, and then north to Washington Street, and then west to Terre Haute, the first night control point. 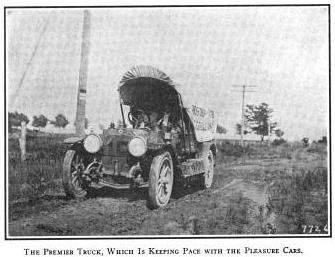 The G & J Tire Company of Indianapolis’ truck keeping up the pace with the touring cars.

The Hoosier tourists had to endure thunderstorms, crossing the Rocky Mountains and the Western deserts in primitive automobiles that are hard to imagine 100 years later.  Nearly every vehicle accomplished this trek and arrived in Los Angeles after never being more than 24 hours behind schedule. 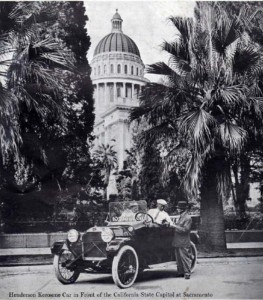 The 1913 IAMA Indiana-Pacific Tour served as a model of promoting Indiana-built automobiles and generating interest for building roads, like the proposed Ocean-to-Ocean Rock Highway later to be known as the Lincoln Highway. This road was the impetus to the start of our Federal Highway System.

Previously all roads were developed and maintained by local governments.  The first transcontinental highway, the Lincoln Highway, showed the federal government the opportunities brought by linking good roads from coast to coast. We were to arise from the mud onto paved roadways.

Today we can dash across interstates, from city to city, state to state.  This modern-day convenience owes a great deal of thanks to the 1913 IAMA Indiana-Pacific Tour.