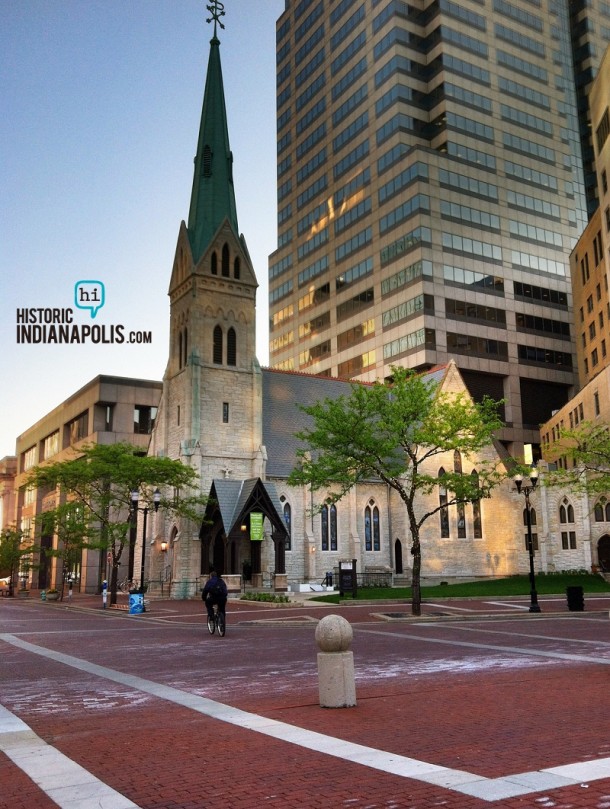 It’s the oldest structure on the Circle, everyone knows that. Right?

So let’s look at some other highlights you may not know:

There used to be four churches on the Circle: Christ Church Episcopal, First Presbyterian (formerly at the other end of the northeast quadrant), Wesley Methodist Chapel, and Second Presbyterian–where Henry Ward Beecher once preached.

This parish started in 1837 on the same spot where it continues today.

The current building–of early English Gothic style–cornerstone was placed on June 25, 1857 and the first service was held in the building on May 22, 1859. It was designed by Irish architect, William Tinsley who also designed the first building for Northwestern Christian University (now Butler) when it started life at 13th and College (razed); Center Hall at Wabash College (still standing) and the Boone county courthouse (razed), Owen County jail in Spencer, Indiana (razed), and St. John’s Church in Lafayette (also Episcopalian) is still standing.

The wood church that preceded the present one was sold to Bethel AME church and moved (not demolished) to the north side of Georgia Street between Senate and the canal. It was destroyed by a suspicious fire in 1862.

In the early days, pews were rented on an annual basis to congregants–much like season tickets for a sporting event–which paid for the church’s expenses. 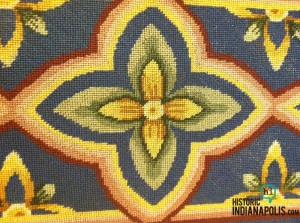 Mrs. Lilly’s embroidered kneeling pillows now decorate a wall in one of the church’s meeting rooms.

Mr. & Mrs. Eli Lilly sat a few pews back from the front and had their own embroidered kneeling pillows, created by Mrs. Lilly herself:

While this church was being constructed, the congregation met in the former State Capitol–where Abraham Lincoln’s body would eventually lie in state. The church and its bells having been completed and installed by the time of Lincoln’s assassination,  Christ Church’s bells tolled as Lincoln’s body was taken to the state Capitol on that occasion–one of the stops en route to his final resting place.

The current annual strawberry festival has its roots in an event staged by the ladies of the congregation in the 1850s to help raise money to fund the building of the current church. It was revived after World War II, again, by ladies of the congregation of Christ Church Cathedral. The original incarnation was staged at the nearby Odd Fellows Hall, rather than on the Circle. 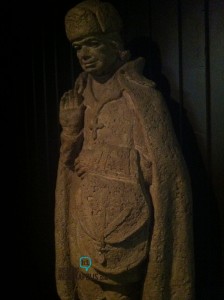 The house currently for sale by Indiana Landmarks–often referred to as the “Wedding Cake House” or “Kemper House”  was named such not for a prior dweller, but rather, Eli Lilly provided the funds to save the home and dedicated it to the memory of the founding bishop of Christ Church in 1837, Bishop Kemper.

In 1864, Grace Church was started with 27 communicants of the Mother Church and that church was built on the southeast corner of Pennsylvania and St. Joseph streets (in what is now St. Joseph Historic neighborhood).

The photo Charlotte Cathcart used in her book, indicated that this is the Grace Episcopal Church that used to stand at Penn & St. Joe Streets.

From the memoirs of Charlotte Cathcart, (Indianapolis From Our Corner) she shares that “Pennsylvania had but one track (streetcar) with a side switch at the Blind Asylum at North Street. The line terminated at St. Joe Street with a turntable in front of the small, frame Grace Episcopal Church.” What a time that must have been…

….and how lucky we are that there are still a few vestiges of those early days remaining. 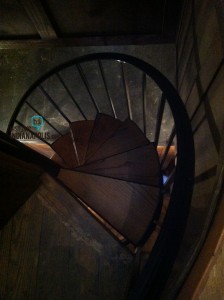 Staring down the spiral staircase from the bell tower 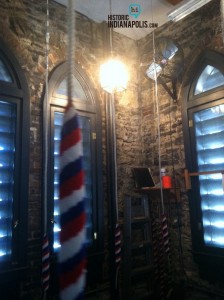 Inside the bell tower 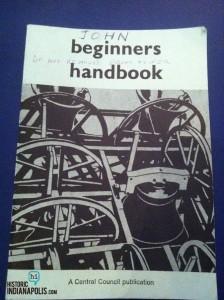