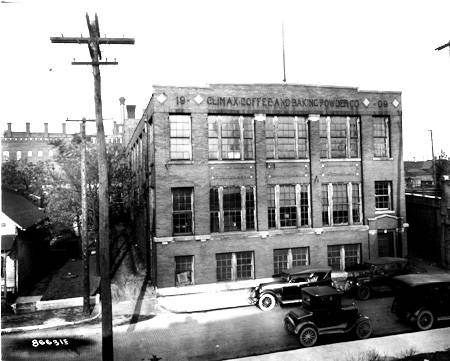 The Climax Coffee and Baking Powder Building at 31-37 South Davidson Street, as it appeared in 1924.

Industrialists settling Indianapolis in the early twentieth century built their factories as closely as possible to the new railroads coursing the city. Most of those buildings, of course, are long gone, and in some cases, even the ground on which they stood seems to have disappeared; progress had a way of brushing it off the beaten path. One example of such a piece of property was the Climax Coffee and Baking Powder Company.

In 1901, H.B. Gates gathered his new stockholders together for a meeting at the Columbia Club. Armed with paid-up capital of $100,000, they were ready to elect officers and organize the new venture.

The Indianapolis News reflected the group’s urgency. An article in the July 27, 1901 edition announced the latest addition to the city’s industrial skyline: “New Company Organized. It will build at once. [It] will begin business as soon as its building at 521, 523, and 527 East Washington Street is in readiness. Ground has been leased and a building three stories high, 202 feet deep and with a frontage of 60 feet in Washington and Pearl Streets is now being erected. It is expected that it will be completed about September 15. The company will roast coffees and manufacture baking powders and extracts.”

As it turned out, Climax put most of its advertising budget in coffee, not baking powder, and their pitch was simple: Roasted coffee (stripped of the outer hull and inner skin) absorbs dust and odor, whether it sits in a warehouse or on your kitchen counter, and all that dust and odor fouls up the taste of your coffee. So don’t buy it in bulk; “buy it the cleanly way, in sealed packages.” 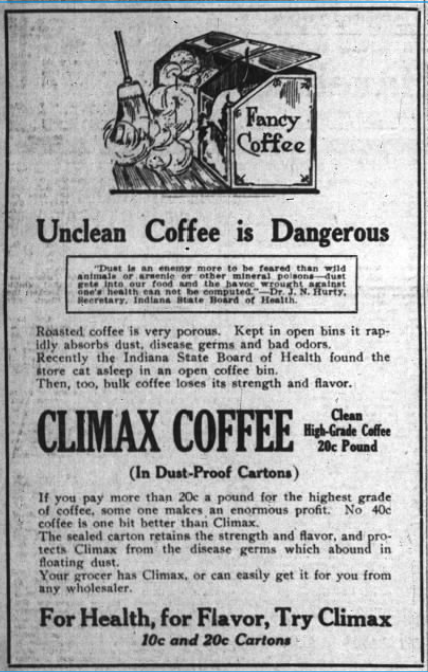 The company also found that giving things away moved more coffee. A 1908 newspaper ad described a typical Climax Coffee Company offer: “Each package of Climax coffee contains a present, either useful or something to amuse a child, which is yours as soon as you open it.  Each package also contains a premium coupon of which 100 are good for a stem-wind, stem-set watch—either lady’s or gentleman’s size.”

Coffee promotions also landed the company in the proverbial hot water. Climax was once “cited to appear” before the Attorney General for violating postal regulations by offering prizes to customers in a way the post office regarded as a lottery business. Company president Gates eventually succeeded in defending Climax in all of the allegations, suggesting the investigation into his company was instigated by competitors not offering prizes. 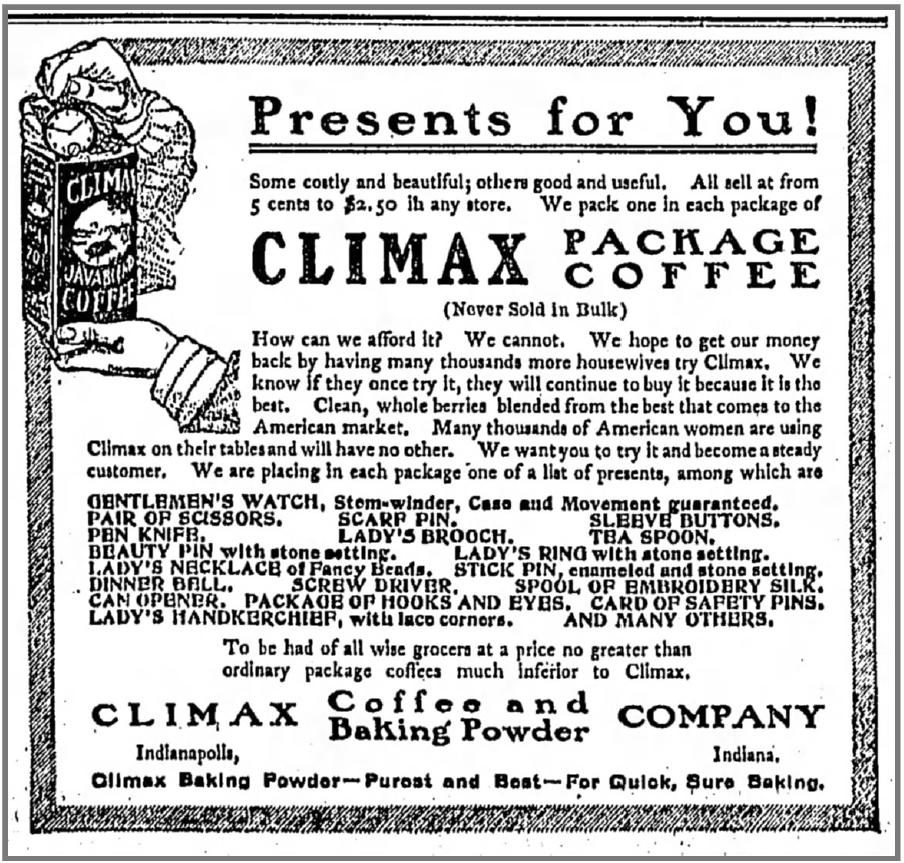 Climax managed their operations as aggressively as they marketed their coffee. After only seven years on Washington Street, they acquired property on the east side of Davidson Street between Daly Street (just south of Washington) and the Pennsylvania Railroad tracks. It was exactly the right spot for a new $34,000 three-story brick and concrete plant “equipped with modern appliances so that the coffee will not be touched by hands from the time it is unloaded from the freight cars until it is sealed in packages.”

The Whitaker Paper Company moved into the “old” Climax Coffee and Baking Powder location on Washington Street, and by 1927, Baist Atlas Plan Maps showed the building as a fire ruins. 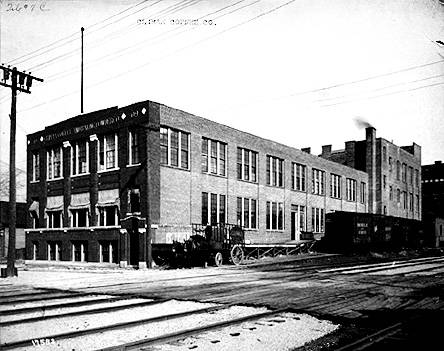 The new Climax Coffee Building after construction in 1909. The building behind it is the National Biscuit Company. The view is from the southwest, looking across the Pennsylvania Railroad tracks at South Davidson Street. Image: Bass Photo Co. Collection, Indiana Historical Society 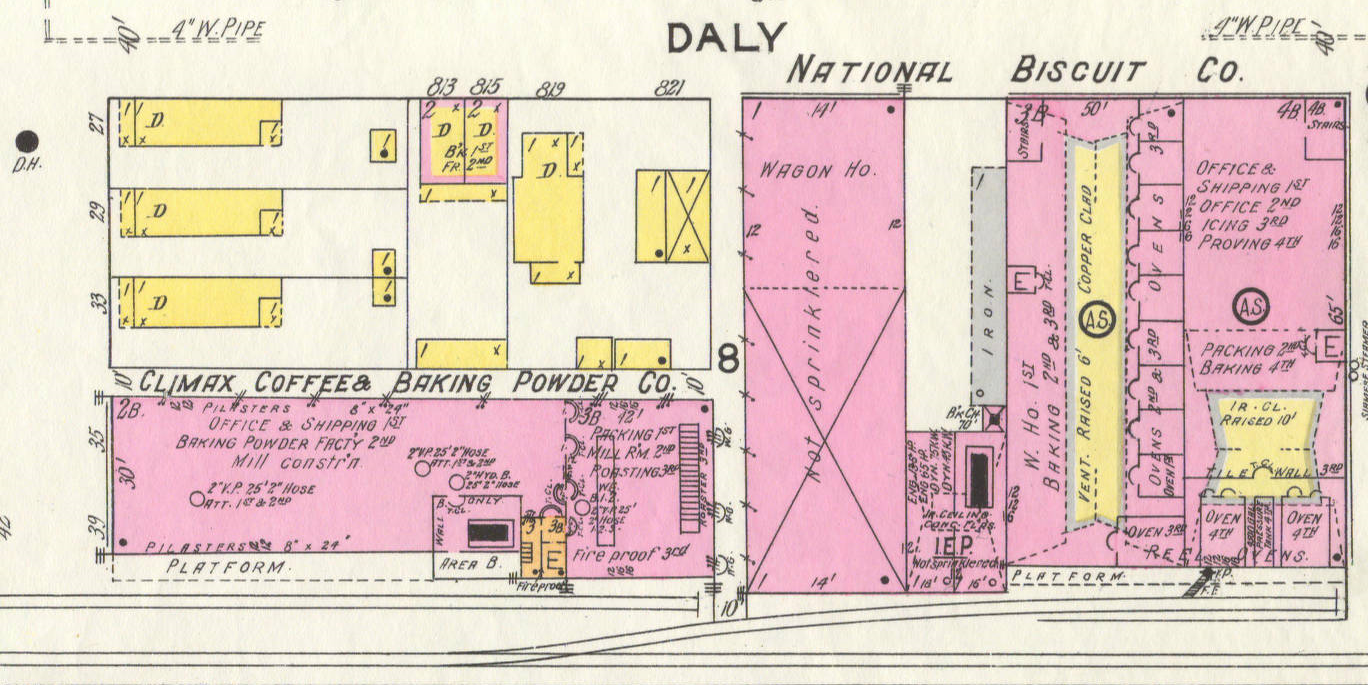 When the new Climax Coffee plant at 31-37 S. Davidson was completed in 1909, Harry Gates led about 100 wholesale grocers from six states on a tour and inspection of the state-of-the-art facility.

But ultimately, the Climax Company struggled to remain competitive or stay ahead of the curve. In March 1925, the expanding National Biscuit Company, Climax Company’s behemoth neighbor to the east, bought the entire city block bounded by Pine, Davidson and Daly Streets, and the Pennsylvania Railroad tracks to the south. The property included the former Climax Coffee plant, which National Biscuit Company took over and operated for another ten years as the Fairway Coffee Company.

Today, the area along the south side of the 800 block of E. Washington Street, bounded by Davidson to the west, Pine to the east, and the railroad tracks to the south, is home to Interstate 65 and its entrance and exit ramps at Washington Street. Davidson is closed temporarily for development and construction of housing just south of the tracks and west of Davidson. Only a small, fenced-in service building, used most recently by Sprint, remains on the site of the Climax building, where the old coffee company and the grounds beneath it are now barely imaginable. 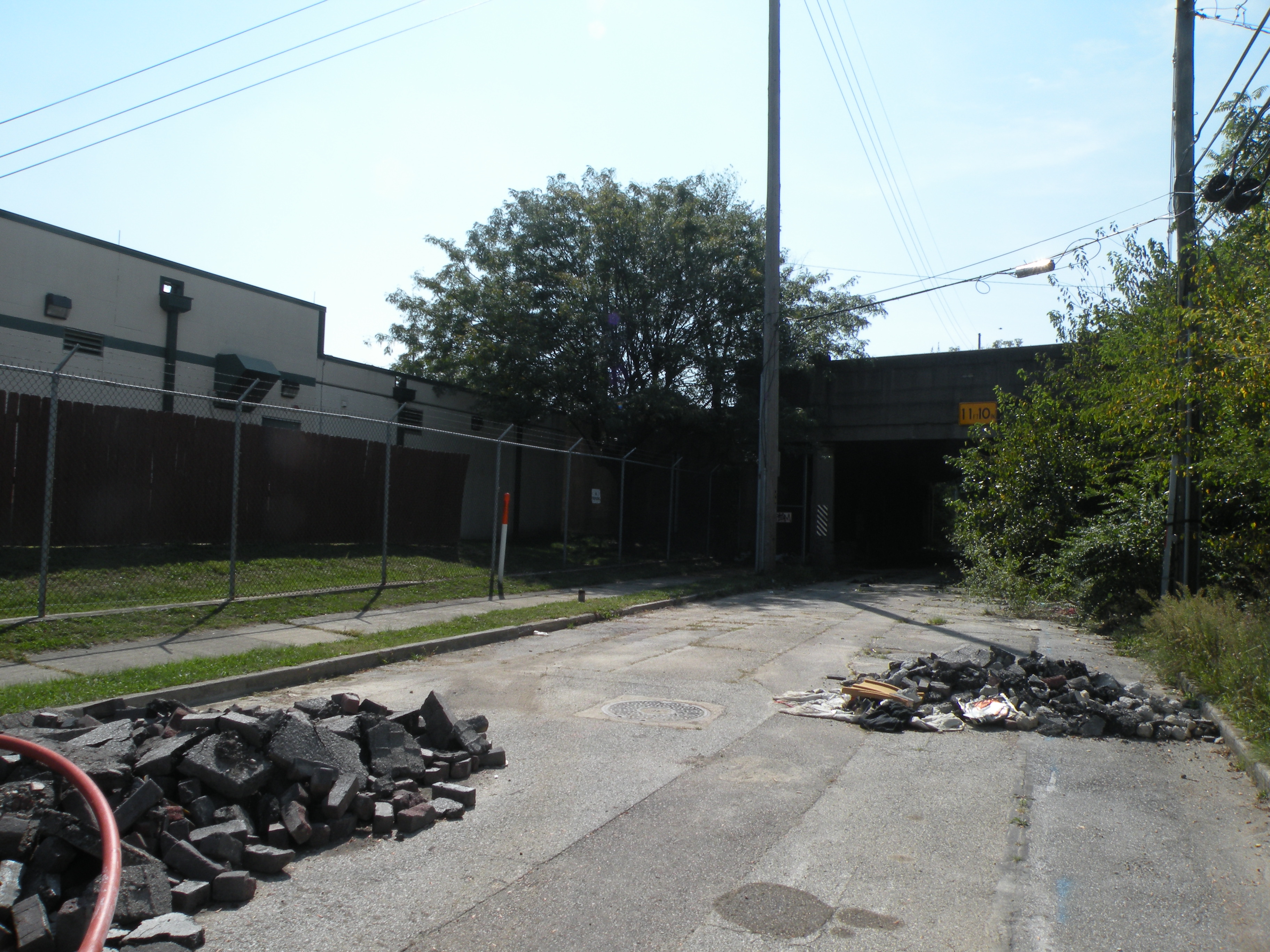 The site of the former Climax Coffee and Baking Soda Company on Davidson Street, now closed for construction, just south of Washington Street