Ever wonder about the history and folklore of cooties?  Around 1950, these mysterious critters evolved into a fictitious bug or imaginary microbe infesting American elementary school playgrounds.  Getting cured had nothing to do with proper medical treatment and everything to do with social standing.  In most cases, you could just unload them onto somebody else, then you were cootie-free.  But sometimes they’re permanent.  As I’ve just been reminded by a girl, “all boys have cooties.”  (“All boys?!”  “Mm hmm. Every. Last. One of them.”)

Though the make-believe variety of this classic contagion was part phobia, part children’s “infection tag game,” the medical roots of cooties are very real.  A type of lice that proliferated in the battlefield trenches of World War I, cooties — so journalists were reporting around 1918 — were coming to America on troop ships, even in letters sent home. 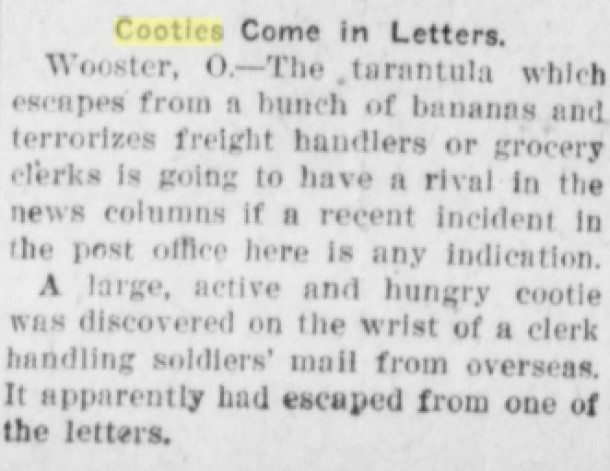 All Quiet on the Western Front threatened to have its sequel in All Scratchy on the Home Front.

So much for the grand, dramatic entrance of the word into American journalism.  The ancestral cooties weren’t mythological creatures after all.  They were actually tumbling out of letters!  Yet by 1922, the word was rapidly evolving, morphing into a term for domestic trouble — and a literal change on the “home front.”  At the crossroads of entomology and etymology, there stand the curb cooties.

Digitized newspapers reveal only about ten or so examples of what was once an uncommon slang term for “idler” — though apparently it could also mean a “male flapper.”

A 1924 article mentions a round-up of curb cooties during a narcotics bust in the “Tenderloin” district of Philadelphia, a part of town known for its seedy flophouses, cathouses, burlesque shows and the City of Brotherly Love’s own Chinatown.  The Brooklyn Daily Eagle reported concerns in 1925 about these cooties luring girls into cars on the poorly lit streets of Astoria, a neighborhood of Queens.  And The Washington Times thought they were a problem in the nation’s capital.  One news clip reminds us how rapidly they pulled off their Kafka-like metamorphosis from bugs to men: 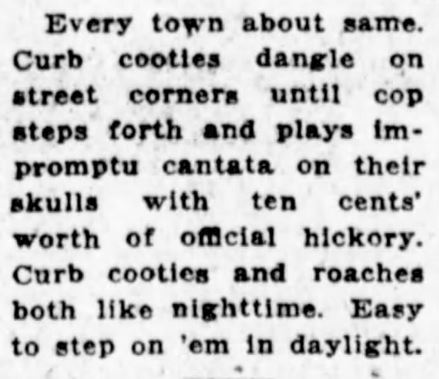 But in September 1922, a young Indianapolis newspaperman published a rave review of curb cootyism. 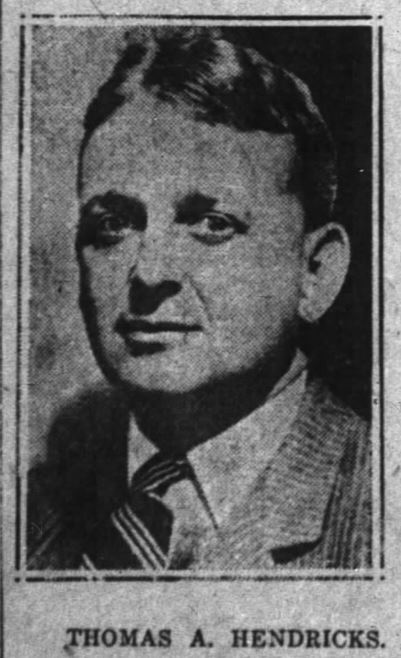 The 27-year-old Thomas A. Hendricks was the grand nephew of former U.S. Senator Thomas A. Hendricks, Grover Cleveland’s Vice-President.  In fact, he even looked a lot like his famous great-uncle.  Born in 1893 in Peru, Indiana, Hendricks claimed that “my best friend in my boyhood days was Cole Porter.  His father ran one drug store, and my father the other.”  Young Tom Hendricks graduated from Shortridge High School, went to Princeton University, then served as a lieutenant in the First World War.

He later kept a summer house on Lake Maxinkuckee in Culver, Indiana.  In a 1959 autobiographical sketch written for the Culver Citizen, Hendricks claimed that he started writing for the Indianapolis Star as a student at Shortridge.  Later joining the staff of the Indianapolis News, he included among his colleagues there the great Hoosier cartoonists Kin Hubbard and Gaar Williams and the journalist and poet Bill Herschell, who wrote a poetry “column” called “Songs of the City Streets” for the Saturday edition of the News.

Hendricks added a fascinating side note on his Indianapolis childhood:  “I was one of Booth Tarkington’s boys.  Many of the Penrod and Seventeen stories were about our own gang of kids who operated on Pennsylvania, Meridian and Delaware Streets in the heart of Indianapolis.”

Tom Hendricks worked largely as a sportswriter.  With his brother Blythe, he is thought to have been the first man to make a radio broadcast of a Hoosier basketball game.  He was also one of the pioneer broadcasters of the Indianapolis 500.   Yet his beat also covered the Indiana Legislature, where he would serve in the House and Senate from 1935 to 1941.  He later lived in Chicago and Culver.  He died in 1964 while playing a game of squash at Chicago’s famous University Club.

In 1924, aged thirty-one, Hendricks became the first Hoosier journalist ever to serve on the board of the Indiana State Medical Association, where he helped promote preventive medicine.  So he must have known something about “medical” cooties.

But it was the new kind of cooties he wrote about in September 1922.  His own take on what a “curb cootie” was is less grim than the verdict of other papers. 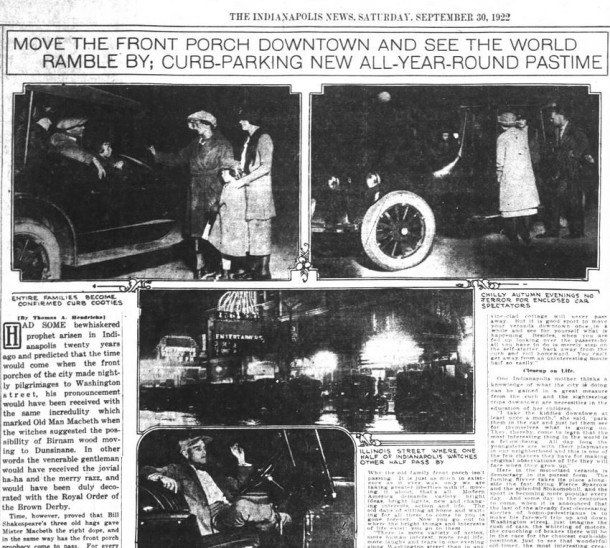 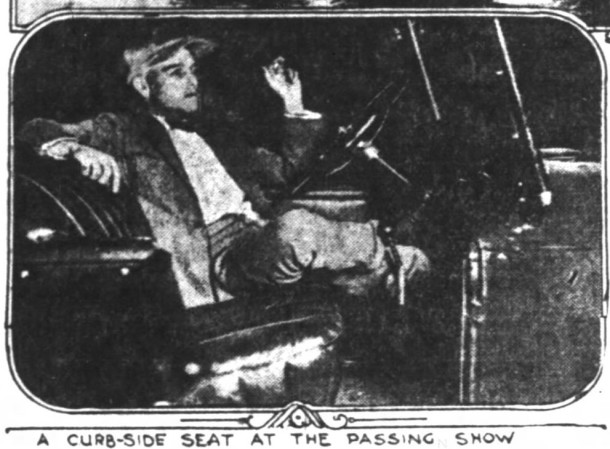 Tom Hendricks displayed both his knowledge of literature and his interest in street life, having been a sort of prototype for Penrod Schofield.  He began the piece with a reference to Macbeth’s fateful decision to disbelieve the witches’ prophecy about a pine forest getting up and walking to the castle at Dunsinane: 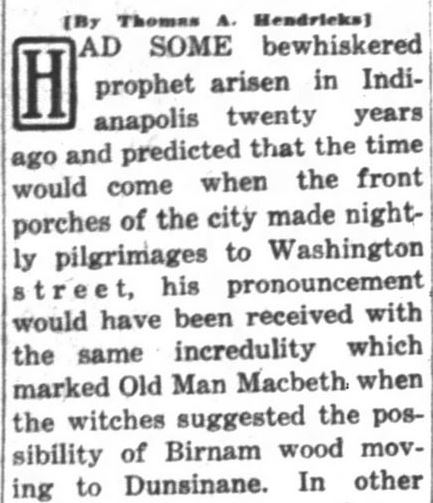 “Time, however, proved that Bill Shakespeare’s three old hags gave Mister Macbeth the right dope, and in the same way has the front porch prophecy come to pass.  For every warm, pleasant evening, the vine-clad verandas, the paternal porches, stoops and doorsteps of Indianapolis suddenly become mobile and migrate in long, motorized, chugging lines toward Washington Street. . . and fight it out for parking space along the downtown street curb lines.”

Porch-sitting in the Midwest has never been the cultural institution it is down South.  Even New York City’s famous stoop-sitting probably never took on here.  When television came along in the ’50s, American sociability did a famous nose-dive.  Yet in Jazz Age Indianapolis, curb cooties seemed to be bucking the trend, taking “porches” where no porch had been before.  Cinematic scenes ensued.

Skirmishing for favorite curb-side parking positions went on all day, said Hendricks, “and almost any hour of the day, the joy-sitter along the Washington, Illinois and Pennsylvania street fronts is able to get a big thrill watching his Hoosier fellows walk along.”

Unlike the predatory, crude cooties mentioned in Philadelphia and New York newspapers, aficionados of the curb in Indianapolis were apparently more civic-minded.  One of them told Hendricks: “Why, my wife and I get more real ‘kick’ and fun out of parking the family flivver downtown alongside the curb and watching a Saturday night, holiday, or Halloween crowd in action than out of any movie picture show I ever saw.”

The “parking philosopher” then expounded:

“What’s the cause of the passing of the old family front porch, you ask?  Why, the old family front porch isn’t passing.  It is just as much in existence as it ever was, only we are taking greater liberties with it, moving it about, that’s all.  Modern America demands variety, bright ideas, bright lights, new and changing interests, action and life.  The old days of sitting and waiting at home for all these to come to you are gone forever.  Now you go out to where the bright things and interests of life exist:  you go to them.

There is more variety of action, more human interest, more real life, more laughs and tears in one evening along Washington Street than in any show or magazine.  The good old-fashioned evenings of sitting at home on the comfy, hidden porch of your vine-clad veranda will never pass away.  But it is a good sport to move your veranda downtown once in a while and see for yourself what is happening.  Besides, when you are fed up looking over the passers-by all you have to do is merely step on the self-starter, back away from the curb and roll homeward.  You can’t get away from an uninteresting movie half so easily.” 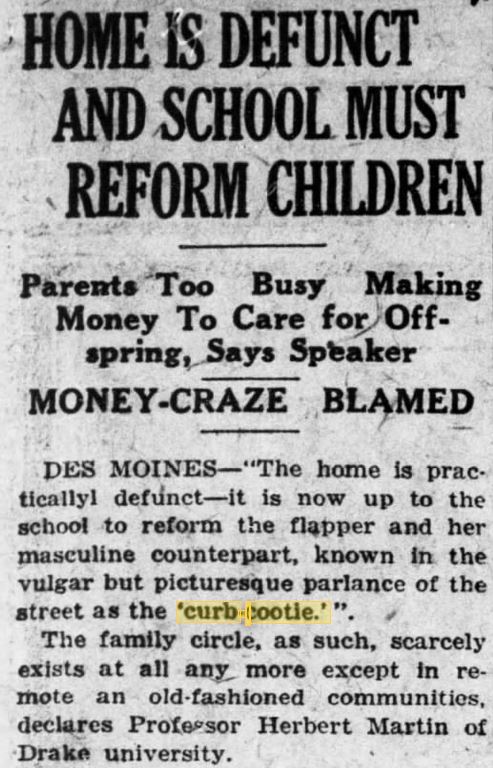 At a time when some Americans were blaming the rise of curb cooties on greedy parents’ lack of interest in their kids, one Indianapolis mother — the exact opposite of the “helicopter parent” — thought the curb scene a necessary part of the education of her children:

“I take the kiddies downtown at least once a month,” she said, “park them in the car and just let them see for themselves what is going on.  They, thereby, come to learn that the most interesting thing in the world is a fellow-being.  All day long the youngsters are with their playmates in our neighborhood and this is one of the few chances they have for making original observations of life they will face when they grow up.”

Hendricks concluded with a futuristic fantasy:  “Some day in the centuries to come, when it is announced that the already fast-decreasing species of homo pedestrianus is to make his farewell trip up and down Washington Street, just imagine the rush of cars, the whirring of motors, the crunching of brakes there will be in the race for the choicest curb-side positions, just to see that wonderful old-timer, the most interesting creation in the world, with his bent frame, fade away forever into the dim distance.” 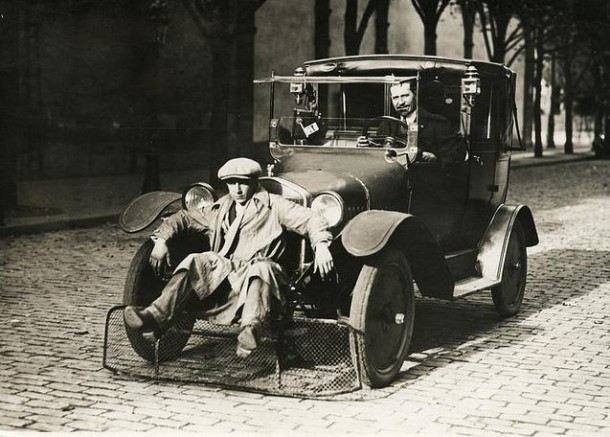 People-scooper for cars, a pedestrian safety device. Paris, France, 1924. (Courtesy National Archives of the Netherlands/Flickr Creative Commons.)  The cow-catcher for humans was a spin-off of the streetcar fender.

Tom Hendricks, grand-nephew of a statesman and possible inspiration for Tarkington’s Penrod, Indy’s own “Tom Sawyer,” was buried at Crown Hill in 1964, though his family believed his spirit hung around Lake Maxinkuckee where he loved to fish.  His daughter “Cici” Hollowell, former president of the Indianapolis Garden Club, joined him in 2009.