Usually, I gravitate towards the neighborhoods nearest to the Mile Square–the older, the better for this gal; and I assumed all of the longest inhabited areas in the city are only centered around that original mile square. So, how delightful and almost exotic it seemed to find a treasure trove of information on a place so relatively far removed from the epicenter of the city in the area now within Mapleton-Fall Creek  Development Corporation. Who doesn’t find it amusing when early reference to Broad Ripple is noted as the location of summer homes of some of the early Indianapolis well-to-do, for example. It’s mind boggling to think that just shy of 4 miles north of the circular-shaped heart of our city, actually wasn’t our city. What today is part of the northern boundary of the Mapleton-Fall Creek  neighborhood was, in 1843, a community called Sugar Grove. The area, more specifically, was in the vicinity of modern day 38th & Meridian Streets. A church community existed there as many others would follow in the area’s lengthy history. In the 1850’s, the place was even granted its own post office, rechristened from ‘Sugar Grove’ to ‘Mapleton.’ (Must have been  an editor involved there– succinct alteration). Through the 1860’s and 1870’s, some commercial development and homes sprouted around Illinois, Maple (now 38th) and Meridian Streets and an Indianapolis street railway conveyed people up Illinois to Crown Hill Cemetery (incorporated in 1863). 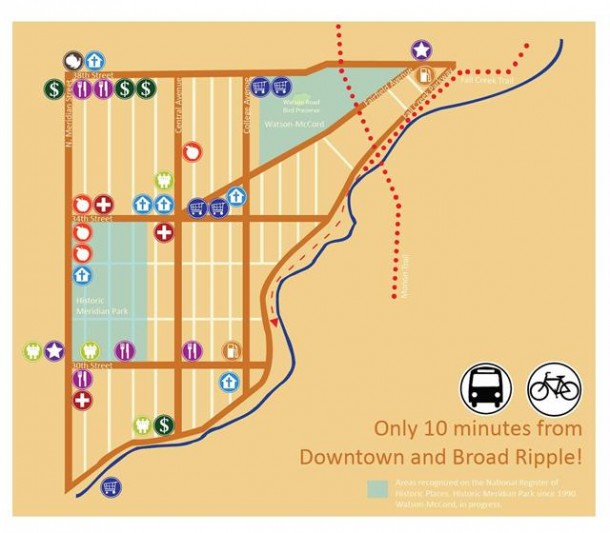 In the 1880’s, the Mapleton area became known as a popular watering place for horses traveling between Broad Ripple and Indianapolis. The area now known as  Historic Meridian Park began flourishing in the 1890’s as some well-to-do families of downtown opted to construct their summer homes here.  In 1891, the Indiana State Board of Agriculture was looking to relocate the State Fairgrounds from their long-standing home in what is now Herron-Morton Place. A large farm bordering Fall Creek and 38th was purchased to become the permanent home of the Indiana State Fairgrounds, where it continues to this day. The city continued sprawling in every direction, and many more homes filled in the land between the old fairgrounds and the new–in-filling a large portion of the Mapleton-Fall Creek area. 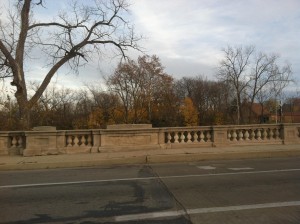 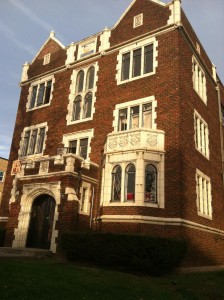 Fall Creek Parkway was designed specifically to be a scenic boulevard. As the automobile flourished, so did the fanning out of residences and the roads between the city and those abodes. Beautiful bridges were constructed: College Avenue’s in 1905, with 30th Street following in 1906 and the Capitol Avenue Bridge in 1911. And as automobiles eased the transition between the original mile square and parts far afield, the dealers selling said autos began replacing the beautiful mansions that once dotted Meridian Street, south of 16th. You might have purchased your mechanical horse on Meridian, somewhere below 11th Street, promptly conveying yourself to your new manse on the same street, northwards of Fall Creek. It was known as the place to live–the stretch of Meridian between Fall Creek and Maple (38th) Street, much as the first few blocks of North Meridian had been decades prior.  As if the seeds of  ‘near north’ Meridian had just blown two or three miles up the road, a new crop of opulent mansions and luxury apartment buildings emerged. It is said that by 1915, there were 78 large single-family dwellings between Fall Creek and Maple Road and that by the time the 1930’s rolled around, there were reportedly 27 luxury apartment buildings between 30th & 38th Streets! Even former vice-president of the United States, Charles Warren Fairbanks was amongst the migrating crowd, moving from his home just south of 16th & Meridian to Meridian at 30th in 1913. 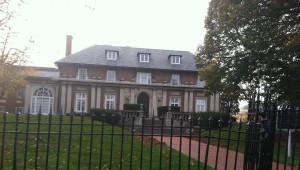 A variety of developments and quick changes occurred in the coming couple of decades. In 1915, the first official governor’s residence was established on 27th Street–fronting Fall Creek and in view from the Marott Hotel, (now apartments) built in 1927.  Hard to believe it was as early as 1923 that the Fairbanks Mansion was sold to the Indianapolis Life Insurance Company. In 1929, the Rauh  mansion, north of the former Fairbanks mansion was repurposed as a branch library– until the 1970’s when torn down for the Children’s Museum expansion. 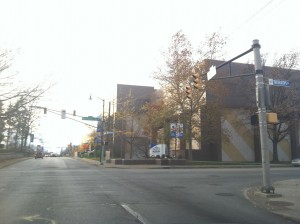 Indianapolis Children's Museum that replaced the Rauh Mansion among others. 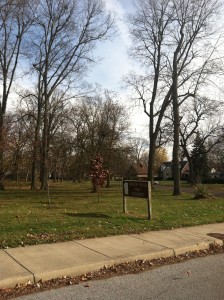 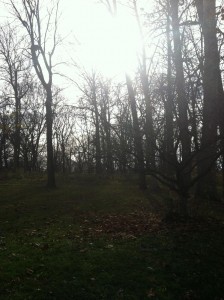 May look like far out in the country, but it's walking distance from the state fairgrounds!

Enticements to the area continued as, in 1925, the Indianapolis Parks Department acquired McCord Park at 3600 Watson Road and the Watson Road Bird Preserve at Guilford Street and Watson Road. Noteworthy high school, Shortridge moved into the area in 1928–seems everyone knows Kurt Vonnegut, Jr. attended classes there at 34th & Meridian Streets from 1936-1940.

As any thriving historic neighborhood knows, you don’t get to experience the thrill of renewal and renaissance before enduring a period of decline, or at least apathy. The 1940’s and beyond, introduced the area to decline, as the well-to-do, continued their never-ending northern migration. Leaving in their wake a plethora of large, stylish homes.

Today, a number of neighborhoods are strung together under the Mapleton-Fall Creek Development Corporation boundaries and the opportunity for that renaissance has arrived. There is a saying (and I’m paraphrasing)  “nothing brings people together more than a common cause.” The area is replete with opportunity and burgeoning redevelopment plans for those interested in becoming part of the solution and a key component in leaving a part of Indianapolis better.  I have often heard the stories of the wave of new pioneers who took on properties and neighborhoods like Lockerbie Square and Old Northside when “frightening,” “decrepit,” “run-down,” and other such descriptors were synonymous with the area. Now filled with some of the most expensive and desirable properties in greater downtown, their journey of rejuvenation is legendary. A similar scenario looks to be playing out in Mapleton-Fall Creek area, among others. There are many opportunities to obtain affordable homes of quality and to make a difference to the future, while honoring the past. As with Lockerbie and Old Northside, the opportunity in this area is ripe and attractive. What was run down is going experiencing renewal. In many cases, the renovations have already been completed. There are many homes on Park, Broadway, Ruckle, 30th and 32nd streets, in particular that have been renovated and await. The way to do it is to bring not only your family, but also your friends who believe in community building and moreover, believe in and invest in the city of Indianapolis.

I know it sounds a bit like reverse snobbery, but why live in an antiseptic bedroom community that only embraces homogenization? How is that going to prepare the children of today for the reality of the world of tomorrow? I’m reminded of a plaque my parents had in their entry way throughout my youth. It said “Children learn what they live.” 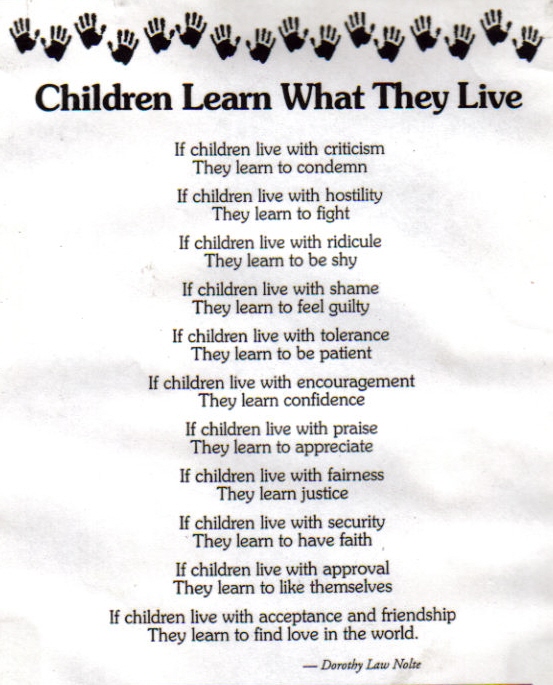 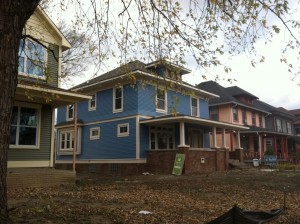 A stretch of Ruckle getting revitalized

What wonderful examples your children may learn when you embrace and impact a community. Within this area, there are a variety of housing options, churches, individual neighborhoods and close proximity to downtown, and close access to biking paths like The Monon.  There are parks, including a bird sanctuary, and close proximity to the State Fairgrounds, which hosts hundreds of events annually. All residents are eligible for free membership to the Children’s Museum of Indianapolis and there are a variety of educational options for children including public, private and charter schools. It’s not hard to imagine being a fairly young couple with many friends and collectively buying up blocks of an area–you’d at least be assured you’d like some of your neighbors…it’s been said that this was often the case in those early days in Lockerbie, Old Northside, and the like.  If you are interested in being in the new wave of urban pioneers, you can follow any of the links in this story, or contact City Gallery, which is connected to this and a number of other blossoming greater downtown areas–it’s a great resource when starting your search. Of course, the romantic in me can’t help but hope you will adopt a historic home and/or neighborhood. We’ve got a lot of great ones. 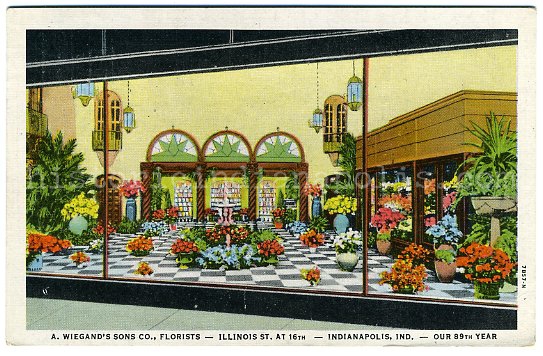