In an old Saturday Night Live sketch, a rugged frontiersman named “Johnny Canal” travels to the White House in 1820 to pitch his idea of connecting every city and town in the country by an elaborate system of canals.  A skeptical aide to the President (played by Jon Lovitz) points out that Mr. Canal’s dream is “redundant” and “utterly ridiculous” because most of the U.S. was already connected by railroads. 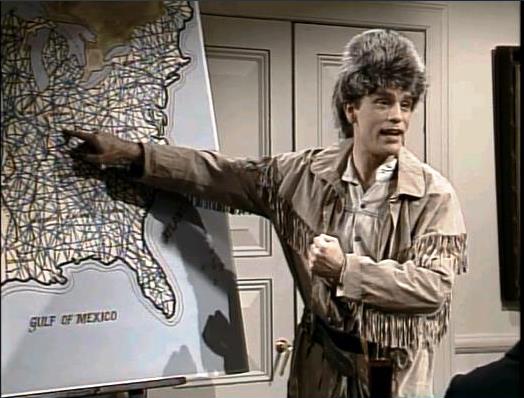 Shocking as it may seem, the SNL writers actually got this important historical fact completely wrong.  The “Johnny Canal” sketch was set in 1820, but it would be another decade before the first railroad started rolling in the United States.

Indianapolis lagged even further behind. Although the 1831 General Assembly chartered companies for the construction of six railroads through the capital city, 16 years would pass before the first train finally arrived in Indy.

In the meantime, however, Indiana had dug more than 200 miles of canals and buried the state in a mountain of debt.  How did Indiana end up in this predicament? An 1835 letter that recently surfaced on eBay provides a first-hand look at the worst legislative fiasco in Indiana history. 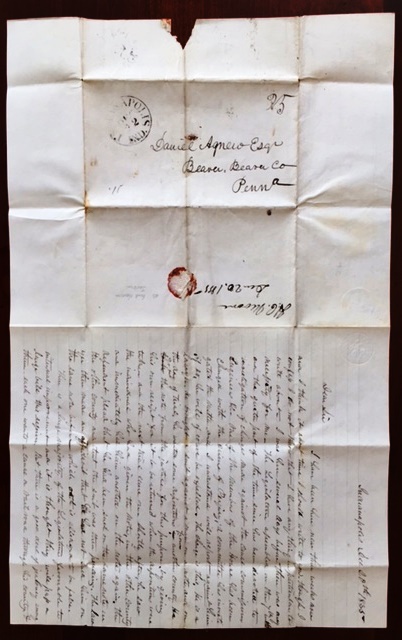 The success of the Erie Canal infected the fledgling United States with canal mania in the late 1820s. Hoosiers were not immune from the fever. With the railroad industry still in its infancy, canals were viewed by many as a proven path to prosperity.

The legislature embarked on a multi-year effort to charter railroad companies, build turnpikes and construct canals, but progress wasn’t fast enough for Indiana’s struggling pioneer communities. Industry was foundering because there was no easy way to get goods to market. Settlers were forced to pay exorbitant prices for basic amenities such as flour, which was selling for $10 a barrel in Fort Wayne.  By the time the legislature convened for the 1834-35 session, voters were clamoring for a system of roads, canals and railroads that would connect the Hoosier state with the rest of the world.

In his address to the General Assembly, Gov. Noah Noble told lawmakers that there was no reason why Indiana shouldn’t follow the successful examples of other states that had invested in infrastructure. He suggested that Indiana could “borrow money at a fair rate of interest, and expend it upon some well-selected objects of paramount public utility.”

Legislators were besieged with requests from their local communities.  It seemed that every town or village, no matter how small, wanted to be on the route of a railroad, turnpike or canal. As the requests piled up, lawmakers realized the difficulty of crafting a transportation system that met the state’s needs and satisfied all of their various constituencies. So they adjourned without taking any substantive action.

Newspaper editors blasted the General Assembly for its failure to invest in much-needed infrastructure.  Whether a lawmaker supported “internal improvements” became the number one campaign issue.  So when the legislature convened in December 1835, it was primed to adopt a massive measure that promised to bring Indiana out of the pioneer era and into the modern 19th century. 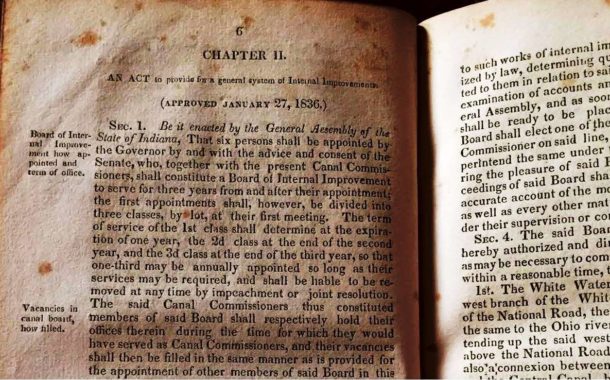 The Internal Improvements Act, as published by the General Assembly in 1836. From the Faegre Baker Daniels library.

House Bill 123 was introduced on January 11, 1836 and was named “A bill to provide for the commencement of a general system of internal improvements.”  The proposed legislation authorized the state to borrow $10 million for 25 years to fund three canals, a railroad, a macadamized road, and surveys for additional railroads, turnpikes and canals. Lawmakers were assured that this ambitious plan could be accomplished at absolutely no cost to Hoosier taxpayers because rents, tolls and profits from the new system would more than cover the loan repayments.

Opposition quickly arose from counties that were left out of the plan, and for a few days it appeared that the “Mammoth Bill,” as it was now called, would soon suffer the fate of its long-extinct namesake. But supporters were able to beat back the opposition after several days of spirited debate.

Just 16 days after it was introduced, House Bill 123 was signed into law by Gov. Noble.  The state erupted with joy.  Spontaneous artillery salutes and bonfires were celebrated in every corner of Indiana, and lawmakers were praised by newspapers throughout the country for their visionary actions.

Calvin Fletcher was not overstating the joy and enthusiasm that gripped the state when he wrote in his diary that “this grand project will exalt Indiana among the nations of the earth.” 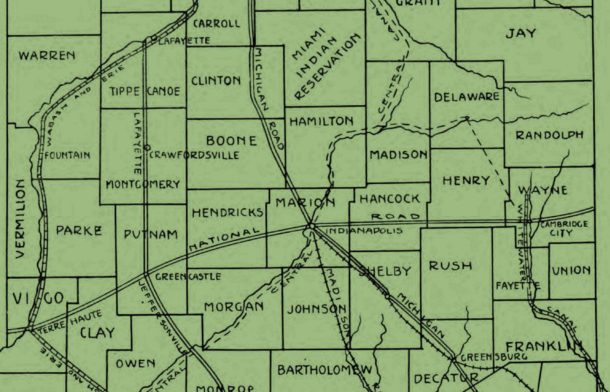 But as any student of Indiana history knows, the Mammoth Internal Improvements Act of 1836 ended up bankrupting the state.  Although there are numerous reasons why the plan failed, it was likely doomed from the start by its sheer size and scope. 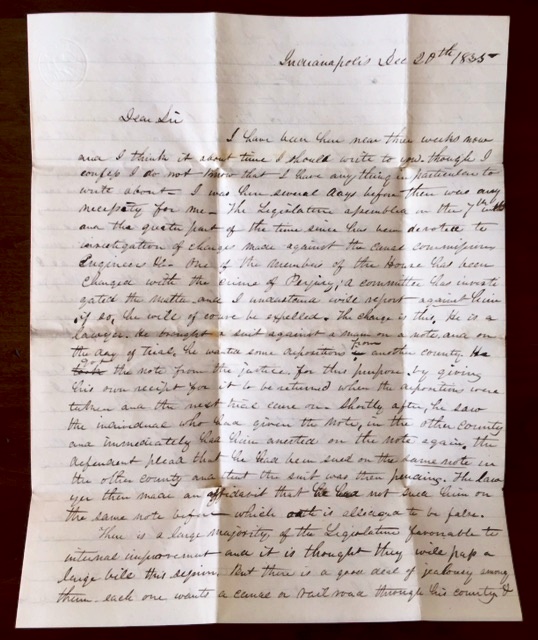 A letter recently surfaced on eBay that predicted the massive behemoth that would emerge from the 1836 General Assembly and cripple the state’s coffers for decades.

On December 20, 1835, canal engineer Henry C. Moore wrote a letter to his brother-in-law, Daniel Agnew.  Moore had arrived in Indianapolis three weeks earlier to testify in legislative hearings regarding malfeasance by canal commissioners.

However, House members had been preoccupied with investigating one of their own colleagues for perjury, which provided Moore with plenty of time to sit back and observe the sausage-factory at work.

In his letter, Moore wrote:

There is a large majority of the Legislature favorable to internal improvement and it is thought they will pass a large bill this session.  But there is a good deal of jealousy among them.  Each one wants a canal or railroad through his county.  I should not be surprised if the bill is not voted down by them unless it is very large and if large, its friends will then vote against it.

While Moore may have been an experienced engineer, he apparently was not a savvy politician.  In his letter, Moore predicted that the Mammoth Bill would be amended with so many costly projects that it would die in the legislature of its own weight.

What Moore failed to take into account was the time-honored legislative practice of logrolling, which resulted in a bill that was Too Big to Fail but a law that was Too Large to Succeed. 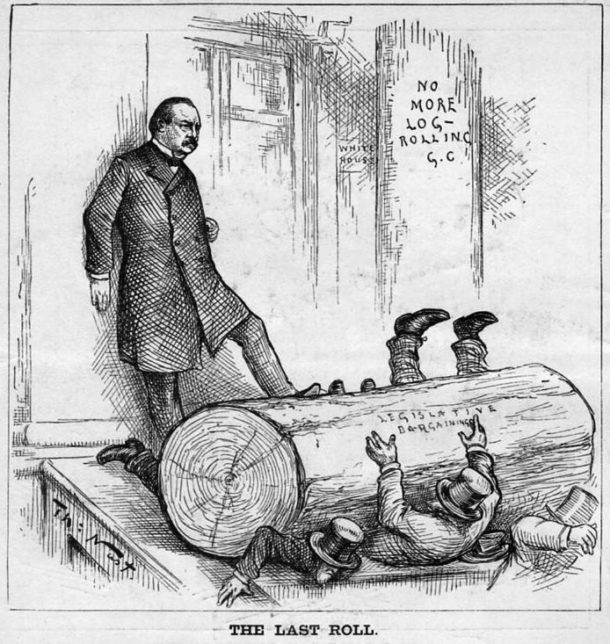 Logrolling is the practice of stacking multiple items into the same bill in order to garner enough collective votes for passage.  The term first came into common usage in the early 1800s, during a time when pioneers helped out their neighbors as they cut, stacked and rolled away timber to clear the dense forest for settlement.

But when the benign practice of neighbor-helping-neighbor evolved into legislative back-scratching, the end result was often massive pieces of legislation stuffed with unrelated provisions that lacked enough votes or merit to pass on their own.

As the Indiana State Sentinel opined in 1846:

If a member has to bargain to get his bill passed, it is pretty good proof that it has not merits enough to be passed without.  He then has to look about for another bill equally objectionable,  and then make a bargain with its friends for mutual aid in voting both through…. The evil inflicted upon this State by this mode of legislation is incalculable. It was the same abominable principle …. that created the mammoth internal improvement system of 1835-36.

In the wake of the internal improvement fiasco, the Indiana Constitution was amended in 1851 with a provision that was aimed at stopping the practice of logrolling.  Article IV, Sec. 19 has been amended twice since its adoption in 1851, and currently states that all legislation “shall be confined to one subject and matters properly connected therewith.”

The courts have taken a hands-off approach to the logrolling prohibition in recent years, and have generally deferred to the wisdom of the legislature in determining whether seemingly unrelated subjects are “properly connected therewith.”  This has resulted in such creative concoctions as a 1993 bill that legalized casinos and provided funding for public schools and a 1995 measure that cut auto excise taxes while repealing the state’s prevailing wage law. 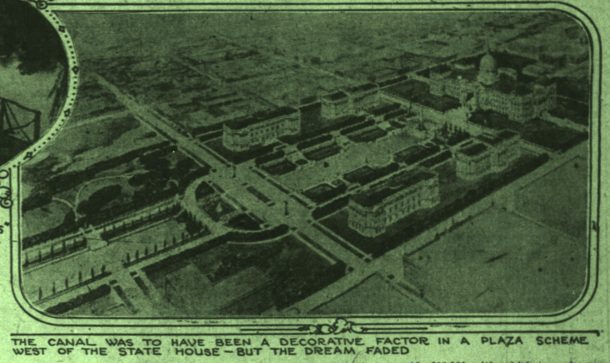 The Indianapolis News, May 19, 1923. Although this plan never came to fruition, the canal was refurbished some 60 years later and now flows through the state office building complex.

Although the constitutional ban on logrolling has been whittled down to a stick, the Mammoth Internal Improvement Act of 1836 did leave its permanent mark on the Statehouse.  The refurbished Central Canal is within spitting distance of the legislative chambers, where House Speaker Samuel Judah told members in 1841, “Here is the end of our golden dreams. Here is consummation of all those visionary schemes … developed in the Wabash and Erie Canal, expanded in the System of 1836, and … terminated in bankruptcy, dishonor and disgrace.”