107 years ago yesterday, a 70-year-old woman from Indianapolis named Mary E. Nicholson made history as one of the first females – if not the first female — elected to public office in the state of Indiana.  A former teacher and administrator in the Indianapolis Public Schools, Nicholson beat four well-respected male business leaders to win a seat on the IPS school board.

Nicholson’s landmark election was orchestrated by an army of well-heeled women who established a city-wide political organization with workers in each ward who walked door-to-door in support of her campaign. Female volunteers were also recruited to stand at the polling places on Election Day and encourage incoming voters to cast their ballots for Nicholson.

Their grassroots strategy paid off.  Nicholson was swept into office with more than 10,000 votes cast in her favor.

It was an astounding victory for women in Indianapolis — especially given the fact that the ballots were cast by an all-male electorate.  As her campaign chairman later noted, “[H]ad women been permitted to vote… Miss Nicholson would have led the ticket by an enormous majority.” 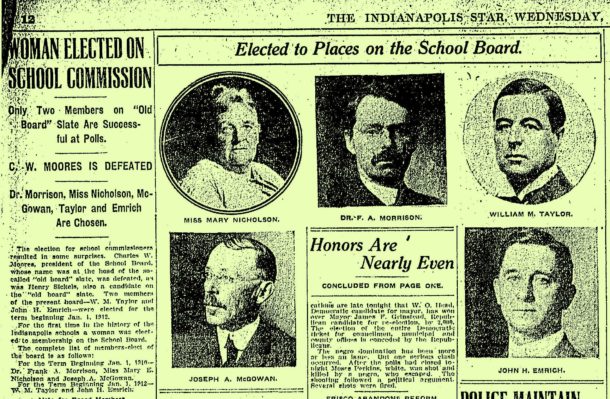 Although other women had run for the IPS school board in the past, Nicholson was the first to succeed, largely due to the well-organized campaign chaired by Dr. Amelia R. Keller, the city’s first female physician and a leader in the Indiana suffrage movement.

According to Keller, the campaign’s primary strategy rested on the collective power of women to convince their husbands and sons to vote for a woman. “We are satisfied that many a man voted for Miss Nicholson just to keep peace in the family,” she told The Indianapolis News in November 1916. 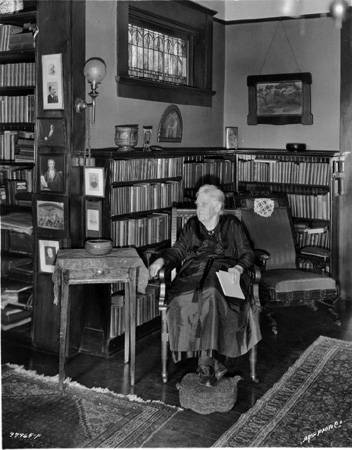 Keller and other suffragettes threw themselves into Nicholson’s campaign in hopes that a victory would finally pave a path to the polls for Indiana women. At the time, women in four surrounding states were allowed to vote in school board races. Even in Indiana, there was widespread support for granting women a similar franchise, based on the rationale that half of the students were girls and many of the teachers and administrators were women.

After Nicholson was elected, the absurdity of the situation gave suffrage supporters an even stronger argument. After all, how could a woman be qualified for public office if the law deemed that she was not qualified to vote?

Nicholson served four years on the IPS school board. Yet after her retirement in 1914 at the age of 75, it would still be another six years before she or any other woman could cast a ballot in Indiana. 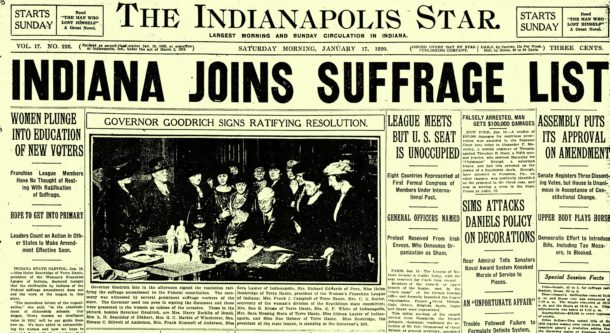 The women’s suffrage movement got its start in Indiana in 1859, when a group of Quaker women lobbied the General Assembly for the right to vote.  It culminated on January 16, 1920, when the legislature finally ratified the 19th Amendment to the Constitution. The amendment was subsequently ratified by Congress on August 18.

After 61 years of trying, the women of Indiana had won the right to vote. But with the general election less than three months away, this was no time for suffragettes to rest on their laurels.  The same women who had worked so hard to persuade men to give women the right to vote now had to persuade women to exercise that right.

The success of the voter registration drive proved to be a short-lived victory for Indiana’s long-suffering suffragettes, however.  On September 10, the State Election Commission issued a controversial ruling that voided many of the female voters’ registration forms.

As election officials were compiling the paperwork from the registration drive, they discovered that a large number of women had either refused to give their age or had lied about it. This was a problem, because under the law in effect at the time, potential voters were required to state their exact age when they registered.  But in order to accommodate the delicate sensibilities of female voters who were coy about revealing their age, registration boards throughout the state had allowed women to simply write that they were “21 plus.”

According to Alma Sickler, president of the Indianapolis League of Women Voters, at least 40 of the 300 women who registered at the League’s office in the Chamber of Commerce building had either written “21 plus,” or had shaved anywhere from five to 20 years off their ages. But Sickler also told The Indianapolis Star that sensitivity to age was not confined to women voters, as she had personally witnessed a prominent businessman flatly refuse to reveal his age, while another man put his age down as 55 although everyone knew he was approaching 80.

Party officials on both sides of the aisle were worried that many women would readily give up their hard-fought right to vote if they were forced to reveal their true ages.  The issue was finally resolved in late September when the Election Commission determined that women who were hesitant to state their age could instead provide their date of birth.  However, any woman who had written “21 plus” would still need to correct her registration form.

A subsequent voter registration drive was scheduled for October 4. Meanwhile, the county auditor set up voting machines throughout Indianapolis so women could learn how to operate them in advance of Election Day.  The League of Women Voters also held a series of educational sessions – a so-called “Voters’ School” that was aimed at teaching the newly minted voters about the workings of government and the issues facing the candidates. 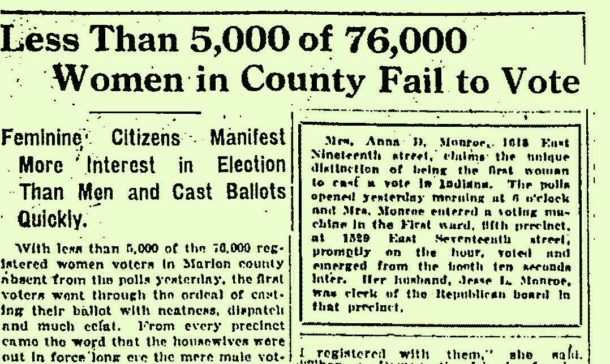 November 2, 1920 — Election Day — was unseasonably cold in Indianapolis. Despite the blustery weather, women flocked to the polls, some with four or five children in tow.

The Indianapolis Star singled out a Mrs. Anna Monroe of East 19th Street as the first woman to cast a vote in Indiana at 6 a.m., but this was later disputed by other women who also voted at 6 a.m.  In fact, precinct workers throughout the city reported that “the housewives were out in force long before the mere male voters fell into the [voting] line.”

Mrs. F.T. Reed of 3370 Broadway was an example of the dogged enthusiasm that drove women to the polls that day. She was headed out to vote when her car was overturned in a collision at 30th and Ruckle streets.  Badly bruised and shaken up, Reed was taken home in a city ambulance.  Undeterred, she rested a few hours and then returned to the polls to cast her vote.

All told, by the time the polls closed at 6 p.m. on November 2, 1920, 93% of the 76,000 registered women voters in Indianapolis had braved the harsh weather to go to the polls and, for the first time in their lives, participate in democracy. 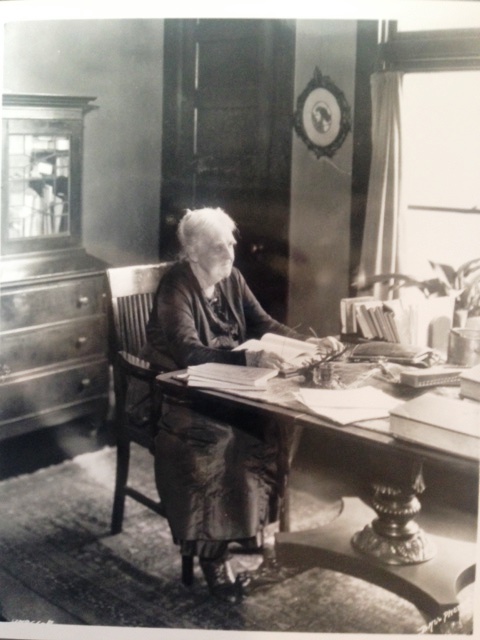 Mary Nicholson did live long enough to see women get the right to vote to Indiana, and even to see the first woman elected to the Indiana House of Representatives.  But over time, her accomplishments have been largely forgotten.

In 1931, the IPS Board named School 70 at 46th and Central in her honor, but earlier this year, the school was renamed CFI School 70.  There’s also no mention of her on the Indiana Commission on Women’s website, which lists a Catherine Dinklage of Fort Wayne as the first woman elected to public office in Indiana.

After researching the issue, I believe that honor really belongs to Mary Nicholson.  The Indianapolis educator is mentioned in numerous accounts as the first woman elected to the IPS Board, but it’s likely that she was also the first woman elected to any public office in the state of Indiana by popular vote. At least to date, I have been able to find no evidence to the contrary.

But regardless of whether she was first, or second or third, Mary Nicholson and her suffragette sisters set an example in 1920 that we all should follow.  During that historic election, 93% of the women registered to vote in Indianapolis went to the polls, a voter turnout that is almost unimaginable today.

In recent weeks, there have been numerous news stories about the elderly women who were born before the 19th Amendment was ratified and who have lived long enough to see a woman run for president on a major party ticket.  But the vast majority of women alive today never lived in a world where they were denied the basic privilege of voting. And so we have come to treat this privilege lightly, to take it for granted.

Or as Joni Mitchell sang, “Don’t it always seem to go that you don’t know what you got ’til it’s gone.”