Pioneer leader James Blake was a man of many firsts.  During the early years of the 19th century, he brought the first piano to Indianapolis, built the first plaster and frame house, opened the first mill, started the first charity, and supervised construction of the first Statehouse.

Although others soon followed his lead, James Blake may also have been our city’s first “tree-hugger.”

As plans were being made to build the first courthouse in the early 1820s, Blake was determined to save at least 200 of the majestic sugar maples that stood on the courthouse square.  Workers hired to thin out the dense undergrowth were told to spare the very old and very tall maples as they cleared out brush and smaller trees.

Unfortunately, this well-intentioned plan had a fatal flaw.  With the protective brush barrier stripped away, the ancient trees were exposed to the harsh prairie winds, which toppled them one by one over the next few years until none were left standing. 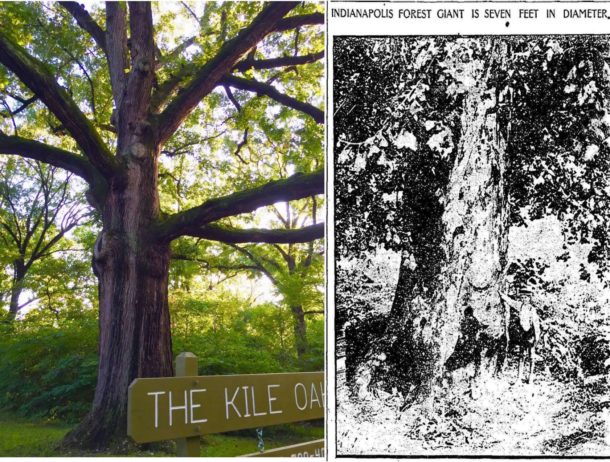 On June 28, 1903, The Indianapolis Morning Star reported that a giant sycamore tree located in the rear of 836 Hamilton Avenue was likely the oldest tree in the city. Today, the 400-year-old Kile Oak in Irvington bears the title.

Despite Blake’s failure to save the maples, he continued to be one of Indy’s main “go-to” people for the remainder of his life. In 1863, Blake joined with a group of civic leaders to establish Crown Hill Cemetery, where he was buried seven years later following what was described at the time as the largest funeral in city history. 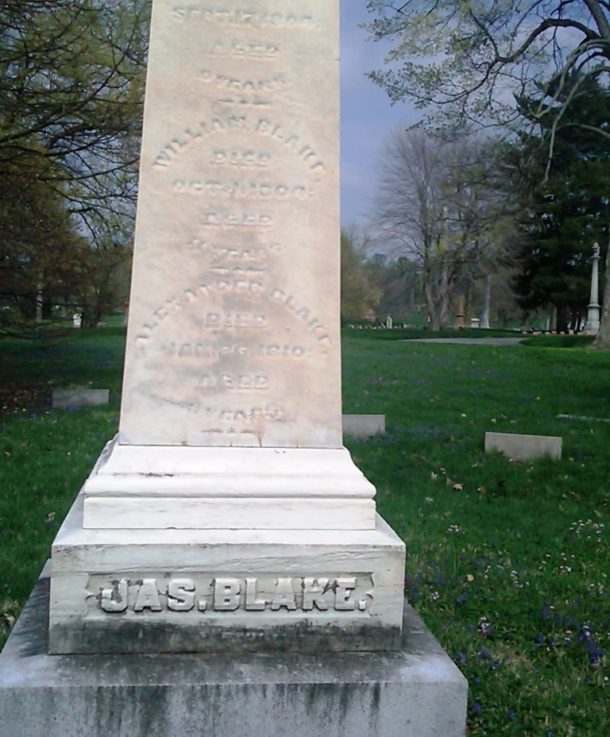 Now, nearly 150 years later, James Blake may be turning over in his grave at the Veterans Administration’s plan to clear a large chunk of former Crown Hill property which holds the last remaining old-growth forest in the middle of Indianapolis.

Last year, the VA purchased 15 acres from Crown Hill to build a cemetery for veterans on land that the VA’s own environmental assessment report described as “undisturbed for a very long time; possibly for more than 300 years given the size and probable age of some of the trees.”

As opponents rally to save the stately trees, they are heading down a trail that was blazed by Blake and other pioneer leaders who saw first-hand the obliteration of the virgin forest and fought to save a few ancient trees for future generations of Indianapolis residents.

When Alexander Ralston platted the city of Indianapolis in 1821, the land was covered with a dark, dense forest.  By necessity, early residents chopped down thousands of trees to construct cabins, clear fields and build the capital city envisioned by Ralston. But in those early years, trees were so plentiful that the immense forest trees that had stood tall for centuries now simply stood in the way of progress.

For the next two decades, the axes flew and the trees fell as Indy’s pioneers went about the backbreaking work of carving a city out of a forest.  The deforestation was so successful that in 1843, the Rev. Henry Ward Beecher wrote that there were only three forest trees remaining in the mile square – two elms and a buckeye.  Although the Rev. Beecher might have been exaggerating, the scant number of trees left standing in the now-crowded city provided little relief from the sweltering sun.  Beecher summed up the situation as follows:

[C]omes first extermination; then comes scorching summer suns, and too late the wish that the trees had been spared; and at last planting begins, and we who lived amid the immense forests of a new country – on whose town plat, not fifteen years ago, grew immense oaks, maples, sycamores, beeches, tulip trees and elms – are planting the short-lived locusts to obtain a speedy shade! 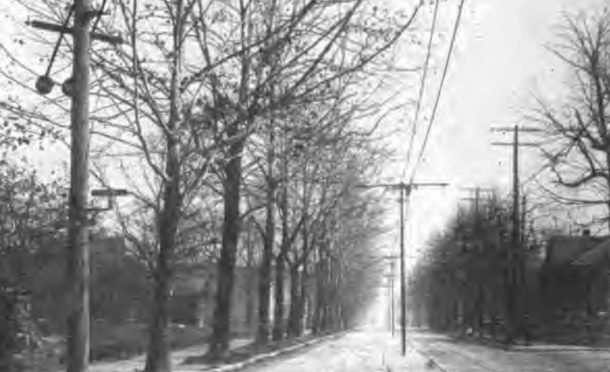 A row of sycamores planted along East 10th Street. 1912 Report of the State Board of Forestry

This cycle of destroying old-growth trees and replacing them with saplings continued as the city expanded, sometimes over the vehement objections of nature lovers who mourned the loss of the forest.  In 1897, when local attorney William Watson Woollen visited his childhood home on Fall Creek about eight miles northeast of town, he was dismayed to discover that most of the ancient trees in the forest where he had tramped as a child had been cut down and replaced with younger growth.

But then Woolen climbed over a split-rail fence and stumbled up a veritable wildwood. “It was primitive,” he later wrote. “No stock had ever pastured in it.  The buckeye and tulip trees were unfolding their beautiful foliage. The May flowers were just beginning to bloom….This dense forest that I was entering was a bird paradise and resonant with bird song. I had known these hills when I was a boy.”

Woolen promptly purchased the land from the state and named it “Buzzard’s Roost” after an enormous stump that was a favored perch for the birds. With a circumference of 28 feet, the stump was believed to be all that remained of the one-time second largest tree in Marion County. 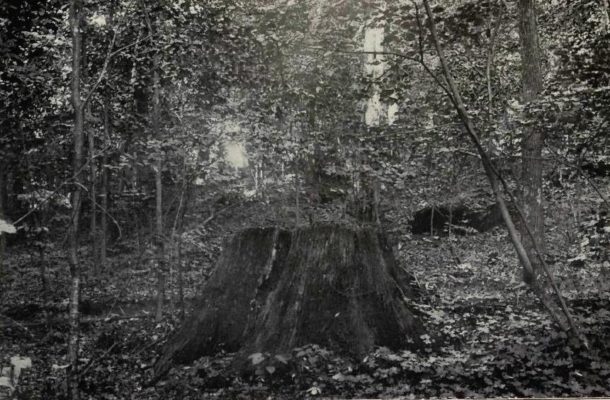 The Buzzard’s Roost. This photo does not do justice to the stump’s enormous size. which was large enough to comfortably seat 12 grown men.

Woolen built rustic summer cabins on the 44-acre property and planted 16 acres with fruit and flowers to attract birds. But the remainder of the land was left untouched.  A long-time student of nature, Woollen recognized the relative rarity of old-growth forest, and conceived a plan to preserve Buzzard’s Roost in its virgin state even as the city grew up around it.

In 1909, Woollen submitted a letter to Mayor Bookwalter and the Board of Park Commissioners and offered to convey Buzzard’s Roost to the city provided that it agreed to certain conditions. First and foremost, the wildwood was to be maintained as near as possible in its present wild state. The wild creatures were to be left undisturbed, as Buzzard’s Roost was their home and refuge. The cabins were to be preserved so that future generations could see how the pioneers lived.  And the property would be renamed “Woollen’s Garden of Birds and Botany” and maintained as a place for the study of nature.

The Park Board held a special meeting two days later and enthusiastically accepted Woollen’s offer and conditions.  The property was situated along the proposed route for the extension of Fall Creek Boulevard — an ideal location for Indy’s first rural park.  The acceptance letter expressed the city’s gratitude and promised that the purpose of the gift and the wishes of the donor would never be forgotten.

The handwritten preface to “The Birds of Buzzard’s Roost,” a book for schoolchildren penned by Woollen (right)

In 1913, Woollen and other outdoor enthusiasts incorporated the Nature Study Club of Indiana to raise funds for the erection of a museum on the property and to ensure that the park was maintained after Woollen’s death.  However, the property fell into disrepair after Woollen died in 1921.  The main entrance off 56th Street was mired in mud and virtually impassible much of the year. Fallen trees and deadwood blocked entry to the cabins.

Pressed to action by park supporters, the Park Board agreed to hire a caretaker and make improvements to Woollen’s Gardens. A new shelter and permanent caretaker’s cottage were added in 1931. For the next 30 years, the unique park was regularly visited by nature and garden clubs, as well as by members of the public seeking refuge from the modern world in the peace and beauty of an untouched forest.

And then in 1964, the state of Indiana decided to build the east leg of I-465 right through the middle of Woollen’s Gardens. 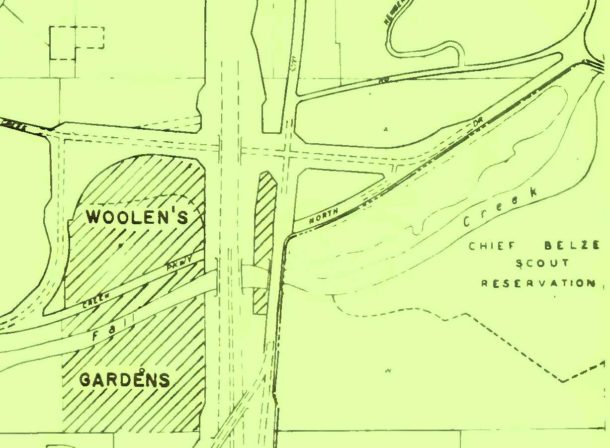 Opponents organized to fight the proposed route, which would uproot more than 11 acres of virgin forest and cover it with concrete. To make matters worse, the roads leading to Woollen’s Gardens would be blocked by the highway, cutting off public access to remaining portion.

Gov. Matt Welsh toured the park, but he remained resolute that the plans move forward without change.  The project already was behind schedule, he told park supporters, and any change to the design to save the forest would delay completion of the highway by three years. 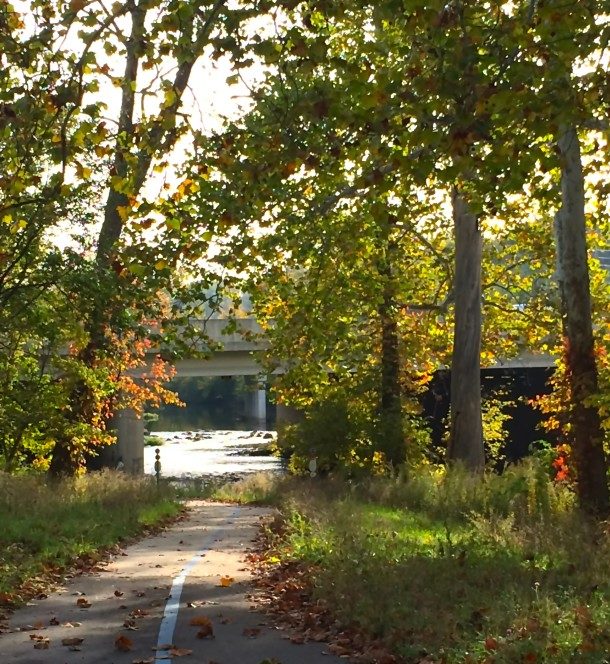 Welsh did promise to build a footbridge across Fall Creek that would allow public access to Woollen’s Gardens.  But the footbridge was never built, and the buildings were either dismantled or collapsed from neglect.

In 1987, the local chapter of the Audubon Society launched a successful campaign to have Woollen’s Gardens designated as a state nature preserve, thereby preserving the forest for future generations. But without a footbridge, the park remained inaccessible.

In 2003, an article in The Indianapolis Star noted that the city had been tending to this virgin forest for the past 37 years, even though it was completely cut off from the public.  And according to city officials, it would be at least another 10 years before a footbridge was built connecting the Fall Creek Greenway to Woollen’s Gardens. 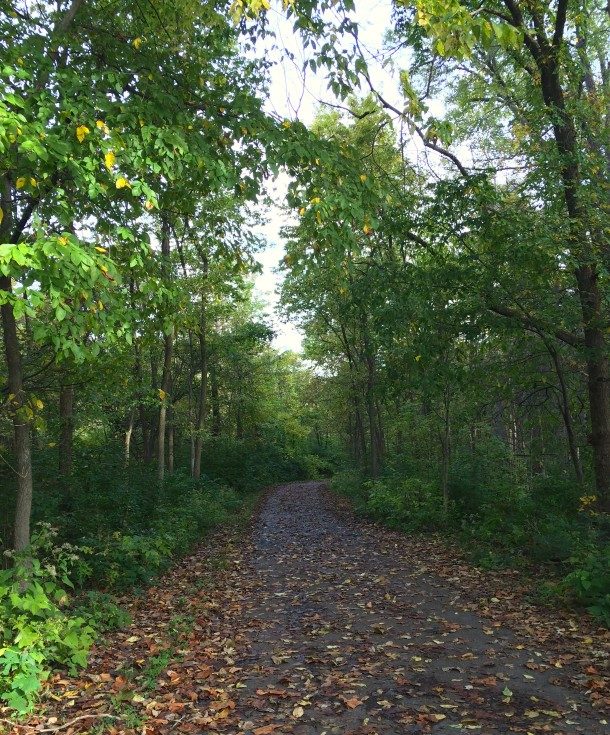 Although Woollen spent his final years tramping through the forest he loved, he chose to be buried at Crown Hill Cemetery.  I’d like to think that he is finally resting in peace, knowing that Woollen’s Gardens are open to the public again. But like his Crown Hill neighbor James Blake, he may be tossing and turning a bit in his grave over the potential destruction of another ancient forest that has flourished for centuries in the heart of the city.