Now, I’m no mathematician, but based on everything I’ve ever heard or read, a Centennial only comes round once every hundred years. It’s always been my understanding that 1920 was the date firmly fixed by city leaders for the Centennial celebration; in fact, I’d written an HI article about the week-long festivities in June 1920 that literally involved a cast of thousands.  So I was understandably confused to discover that Indianapolis celebrated another 100th birthday a mere 16 years later. 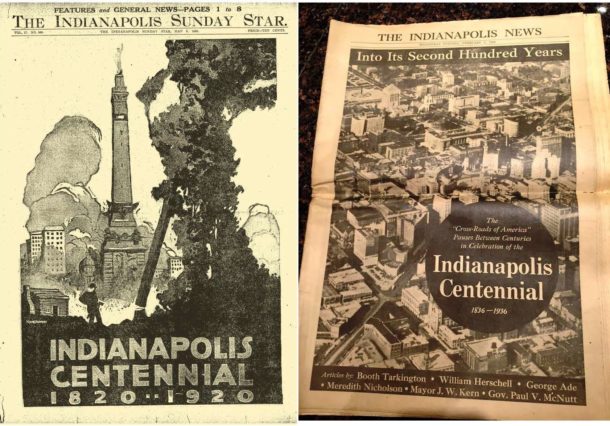 But come to think of it, I really shouldn’t have been surprised. In the absence of a birth certificate, city leaders have long struggled to pinpoint the official year and date when the city of Indianapolis was born.  In fact, this “birther” controversy has been brewing for nearly 200 years, going back to the heated pioneer-era dispute over whether George Pogue or John McCormick was the first settler to arrive on the scene.

So here’s how the controversy breaks down. One camp believes that the city’s official birthdate is June 7, 1820, when the commissioners charged with selecting a location for the new state capital chose a site near the mouth of Fall Creek in an area that would later become Marion County. Another camp believes that Indy’s birth occurred on January 6, 1821, when the General Assembly ratified the commissioners’ decision and voted to call the new capitol “Indianapolis.” And yet another much-smaller camp apparently believes that the city’s birth did not really occur until 1836, when the legislature granted Indianapolis its first town charter.

In 1920, a committee tasked with putting together a Centennial celebration for the city attempted to settle the question once and for all by fixing June 7, 1920 as the official date for Indy’s 100th birthday bash.  Noting the ongoing Pogue-McCormick dispute, the committee wrote in its report that June 7, 1820 should be decreed the official birthdate of Indianapolis because it is “the earliest date connected with the history of the city that is not subject to any controversy.”

Lending additional support to this argument was the simple fact a June celebration would encourage the participation of the city’s children, because “[i]t comes at the end of the school year, when pupils welcome celebrations of any kind.” Further, June 7, 1820 was the date of the beginning of commerce in Indianapolis, as evidenced by an entry in one of the commissioner’s diaries noting that he purchased 62 1/2 cents worth of whiskey and corn off a flatboat that arrived that day.

Fixing the date of our city’s birth was not an easy decision for the Centennial committee.  A group of civic leaders led an intense lobbying effort to delay the celebration until 1921, which would allow sufficient time to raise funds for a commemorative monument. But there already was precedent for celebrating the city’s birthday on June 7, and in the end, the committee saw no compelling reason to depart from that precedent. 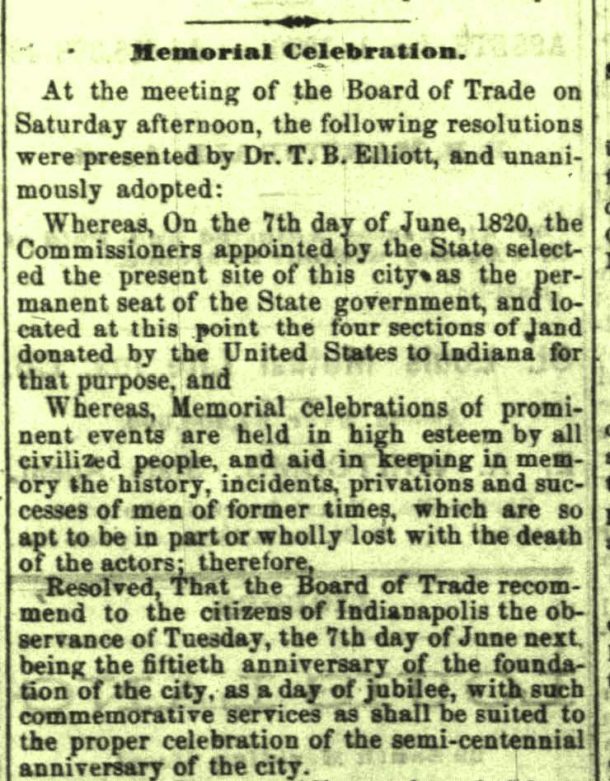 In April 1870, the Indianapolis Board of Trade adopted a resolution calling on the citizenry to celebrate June 7, 1870 as “a day of jubilee, with such commemorative services as shall be suited to the proper celebration of the semi-centennial anniversary of the city.”

An executive committee headed by James M. Ray was quickly established, along with a number of subcommittees addressing arrangements, fundraising, music, fireworks, wagons and banners.  Local poets were invited to submit original odes for inclusion in the festivities, and painter Theodore Glessing was retained to create 10 banners representing different phases of the city’s history.

The executive committee asked the city council to approve a $2000 appropriation to help underwrite the cost of the Semi-Centennial. The appropriation was denied.

Reeling from the unexpected defeat, the Semi-Centennial committee scrambled to salvage the celebration.  A public notice was printed in The Evening News lamenting the fact that the city’s 50th birthday would pass without a celebration and inviting all “who feel like observing the day” to bring their picnic baskets to a gathering at Crown Hill Picnic Park.  Both young and old settlers were invited to attend the free event and “celebrate the day according to the dictates of their own conscience.” 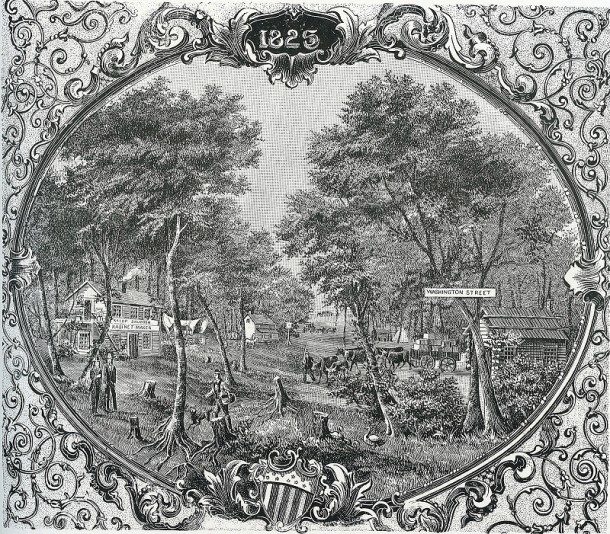 Washington Street, circa 1825. T.B. Glessing was asked to paint 10 views of “old” Indianapolis in honor of the city’s Semi-Centennial. Only two were completed, neither of which survive.

Unfortunately, the 50th birthday bash was a bust.  Although a small group of the earliest surviving settlers made the trek to Crown Hill, apparently most of the younger residents decided that celebrating the day according to the dictates of their own conscience did not mean spending time with a bunch of old people in a cemetery.

The Evening News castigated the citizenry for the lack of public spirit shown on June 7 in an editorial that was curiously dated June 2.”It is not very creditable to Indianapolis that she could not even get up a fitting celebration upon the fiftieth anniversary of her settlement,” the paper wrote. “It is still less creditable that her citizens will not even join in a picnic … when picnics are in season.”

Despite the half-hearted nature of the half-centennial celebration, the city’s Centennial committee opted to follow the precedent set in 1870 and observe the 100th birthday of Indianapolis on June 7, 1920.

So — correct me if I’m wrong here — both logic and math would dictate that the next big birthday bash — the city’s Sesquicentennial — would be celebrated 50 years later, on June 7, 1970.

Sadly, it appears that the citizens of Indy forgot the city’s 150th birthday. The June 7, 1970 edition of The Indianapolis Star mentions the 75th anniversary of Field & Stream magazine, the 30th anniversary of the Indiana-Kentucky All-Star basketball game, and the 50th wedding anniversary for Mr. and Mrs. Lawrence Logan, 1616 Sturm Avenue.

But within the 166 pages of the June 7 Indianapolis Star, there was nary a mention of its namesake’s special day. 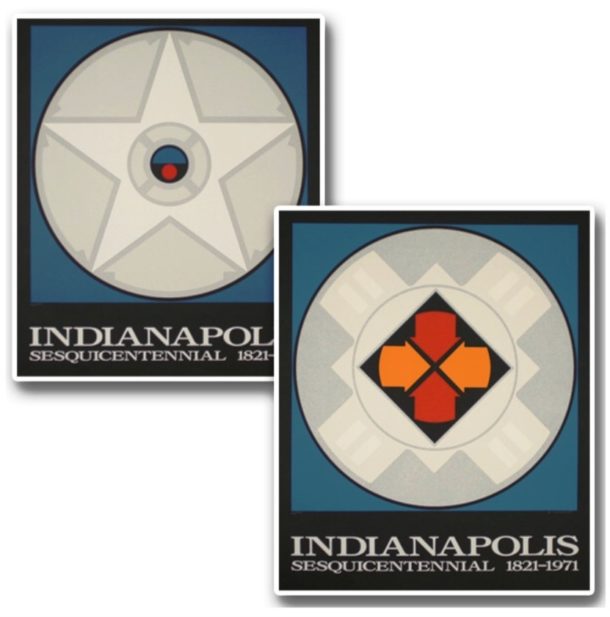 Artist Roland Hobart was commissioned to create five original prints for the 1971 Sesquicentennial. The two silk-screened copies shown above sold at auction in 2011 for $170.

Now granted, Indianapolis was getting a little long in the tooth by the time June 7, 1970 rolled around.  Perhaps in an effort to appear more relevant to the mod hippie crowd,  the city decided to shave a year off its age.  But whatever the reason, the city’s “official” birthdate was now decreed to be January 6, 1971.

The Sesquicentennial celebration — aptly named “We Celebrate our City” — got underway on January 6 with a musical extravaganza at the Murat Theater. Additional events were scheduled throughout the year, including a queen contest and a fine arts program.  Recipes were solicited for a commemorative cookbook dubbed “Sesqui-Samplings,” and the Sesquicentennial Committee also commissioned the much-maligned Snowplow sculpture, which was relegated to the front of an INDOT garage until the Indianapolis Museum of Art purchased it in 1993.

In addition, a number of keepsake items were issued, most of which appear to encourage city residents to “Celebrate our City” by smoking and drinking. 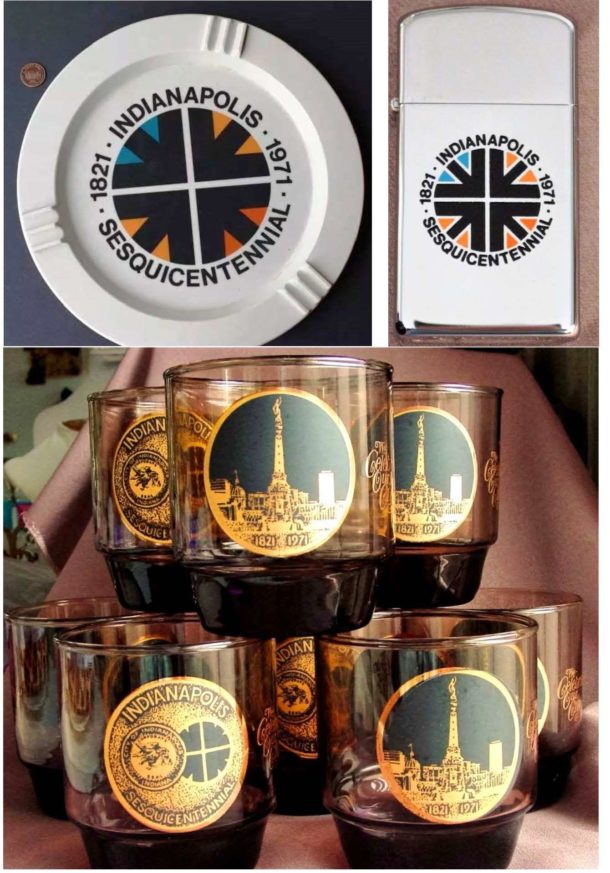 Local author Edward A. Leary, who was commissioned by the Sesquicentennial committee to write a book detailing the story of Indianapolis, seemed a little perturbed by the city’s decision to alter its birthdate. In an article penned for The Indianapolis Star on June 6, 1970, he noted the 51-year gap between the city’s 100th birthday and its 150th birthday.

At this point, no one knows the answer to Leary’s question.  The Greater Indianapolis Progress Committee will be convening a Bicentennial Celebration Committee in the near future that will help determine which year (or years) the city will observe her 200th birthday.

Regardless of which year our city was born, Indianapolis is looking great for her age. And why not? As they say, 200 is the new 140. Sure, her infrastructure may sag a bit — whose wouldn’t at 190+ years? — and her arteries are a little clogged, especially during rush hour. But overall, she’s held up pretty darn well through the years.

So here’s my message to you, Indy, in case you’re feeling a little sensitive about your age. Whether we observe your 200th birthday in 2020, 2021 or even in 2036, remember this — You’re not getting older, you’re getting better. Just don’t join the Red Hat Society.