During a recent campaign stop in Indiana, Donald Trump told a cheering crowd that the job of running for office was so hard that the actual job of being president would be easy by comparison.

Although it’s a safe bet that Trump will reverse his position on the relative difficulty of serving as Leader of the Free World after a couple of hours in the Oval Office, he is right about one thing.  Running for office is really hard.  And since not everyone is willing — or able — to do what it takes to win, there will always be candidates who try to cheat their way to victory.

While Indiana’s history of election fraud pales in comparison to our neighboring state of Illinois, we’ve had more than our fair share of elections in Indianapolis that were bought, sold or even outright stolen. The most recent example of campaign shenanigans involves a candidate for local office in a donut county who was arrested for stealing his opponent’s signs after he left his cell phone at the scene of the crime.

But one of the most notorious stories of campaign-related crime involves the elections of 1914, when according to prosecutors, Indianapolis Mayor Joseph Bell and Democrat National Committeeman Thomas Taggart conspired with 126 other individuals to steal what amounted to 323 votes. 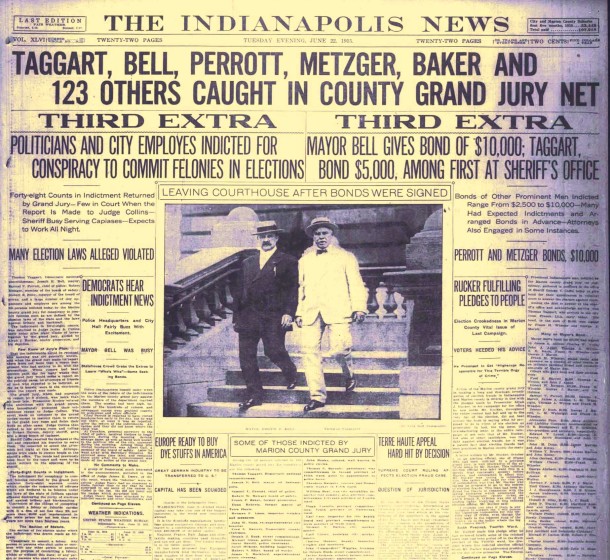 The sensational case went to trial in September 1915, and dominated the front pages of the local newspapers for the next six weeks.  Prosecutors trotted out nearly 700 witnesses who recounted tales of bribery, extortion, vote buying, and voter intimidation, all with the alleged goal of electing Democrat city chairman Edward T. Lyons as county treasurer.

“Bell and that machine at City Hall have no right to try to control the county in their corrupt conspiracy,” Prosecutor Alvin Rucker told jurors during his nearly 12-hour opening statement. “They wanted to put Lyons over for treasurer because they wanted not only to get control of the purse strings of the city, but of the county as well.”

Bell and his co-conspirators, the prosecutor said, were nothing but “political brigands and pirates.” 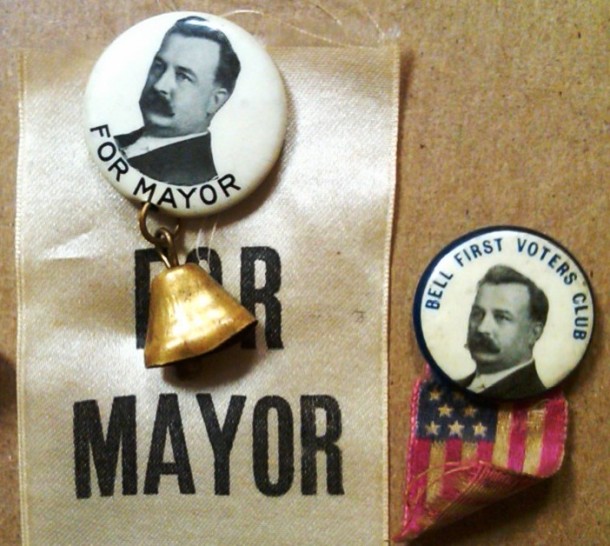 How did a former farm boy find himself at the center of one of the biggest electoral scandals to ever rock Indianapolis? A native of Union County, Bell moved to Indianapolis in 1888 to start a law practice. He soon allied himself with then-Democrat county chairman Thomas Taggart, and was appointed to various positions within the Democrat party.

During each of Taggart’s three terms, Bell served as an assistant to the city attorney. His law partners included future U.S. senator John Kern and future Indiana speaker of the House Walter Myers.

But Bell had political aspirations of his own, and with the support of Taggart and other local Democrats, won the mayor’s office in 1913. Two years later, these same party leaders stood staunchly by Bell’s side when he was indicted on charges of bribery, blackmail and conspiracy to commit voter fraud.

The 48-count indictment read like a who’s who of local Democrats.  In addition to Bell and Taggart, others charged with election-related crimes included the Democrat county chairman, the chief of police, the superintendent of the street railways, and members of both the board of public safety and the board of works.  More than 100 lower-level city employees were also arrested, but were quickly released on bond thanks to bail money furnished by Bell, Taggart and other party faithful.

Prosecutors attempted to paint an ugly picture of a corrupt political machine that bought votes, extorted protection money from saloon keepers, and beat black voters with riot clubs to prevent them from voting for the Republican slate.

The defense countered that the effort to send Bell to prison was a scheme cooked up the editor of The Indianapolis News, who was smarting from a libel lawsuit that Bell had filed earlier in the year after the newspaper published an especially ugly editorial linking members of the Bell administration with prostitution and child abuse. 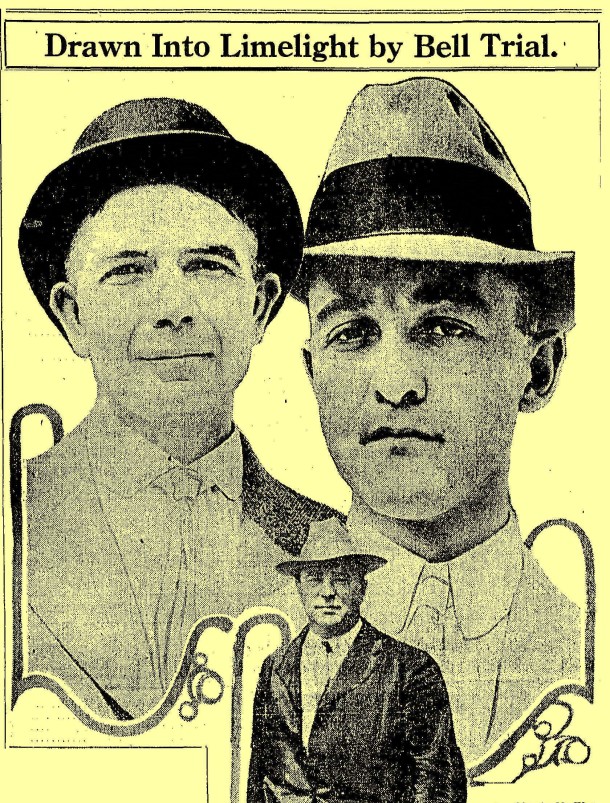 During the six-week trial, one witness for the prosecution testified that he accompanied a Democrat poll worker named Goosie Costello in taking a group of 15 “repeaters” to various polling places so they could vote repeatedly for the Democrat slate. Several others told jurors of police intimidation and beatings in heavily black precincts, which tended to vote Republican during those years. More than 100 saloon keepers were paraded to the witness stand to present testimony on their political contributions to the local Democrat party, which the prosecution maintained were extracted under threat of force.

Yet despite this barrage of nearly 700 witnesses, prosecutors were having a hard time connecting Bell with any illegal activities.  Key prosecution witnesses either recanted the testimony they had provided to the grand jury or developed a hazy memory.  As the trial entered its fifth week, jurors were exhausted and impatient.

The state rested its case on October 8. Bell then took the stand in his own defense, either denying or rebutting each claim in a straightforward manner that — according to The Indianapolis Star — successfully “punctured” the state’s case.

However, Bell’s attorneys were unsuccessful in introducing one key piece of evidence that they claimed would show the lengths that the editor of the News and his Republican cronies would go to put Bell behind bars.

During opening arguments, defense attorney Michael A. Ryan promised jurors that they would receive evidence showing that the state’s witnesses who claimed to be “repeaters” were actually “men of low character” who had been recruited in Chicago by Bat Masterson – a low-life thug who bore no relation to the famed gunslinger who was friends with the likes of Wyatt Earp and Buffalo Bill Cody. According to Ryan, Masterson’s men were being paid $5 a day to present false testimony and were also provided with “amusement of a low and debasing nature” and “women of the lower world” — all at taxpayer expense. 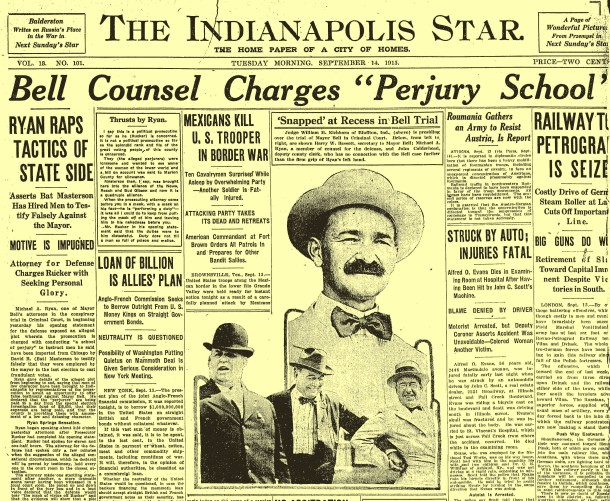 The judge excluded the Masterson evidence, and after just four more witnesses, the defense rested.  The jury returned a verdict after only one hour and 50 minutes of deliberation — which was considerably faster than the time it had taken the judge to read the 55 pages of typewritten jury instructions.

The courtroom erupted in cheers when the verdict was read. Bell was acquitted on all counts.  According to jury foreman Stanley Timberlake of 1434 Broadway:

There was a lot of talking for four weeks, but the evidence did not connect Bell with a conspiracy.  The evidence showed that like all elections, there were fights and trouble here and there, but it did not seem like any one man was responsible for them. 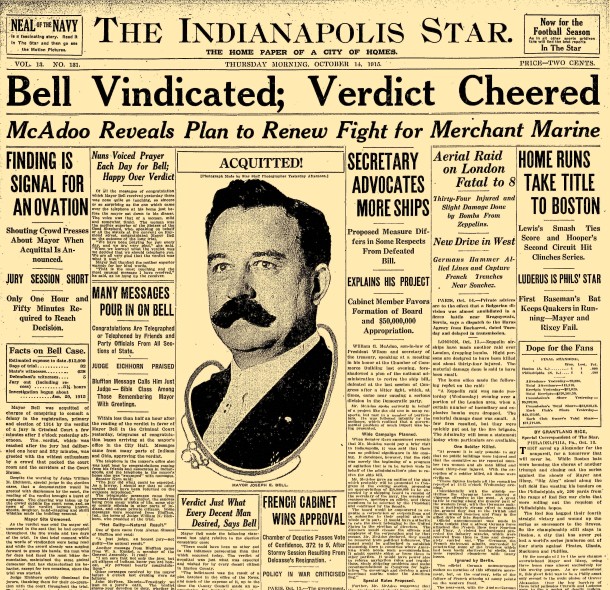 The day-to-day business of governing the city resumed after the trial. The next few years of the Bell administration were marked by a series of public improvements that remain in place today. Pogue’s Run was transformed from an open sewer to a covered drain, the city’s parkways and boulevards were extended, and the sunken gardens at Garfield Park were constructed.

But Bell’s legal woes were far from over.  In July 1917, Bell and 45 other men were indicted by a federal grand jury for conspiring to prevent voters and candidates in the 1914 election from exercising their constitutional rights through oppression, intimidation and other tactics.  Bell’s indictment followed closely on the heels of the conviction of his police chief, Samuel Perrott, on similar charges, and the guilty pleas of several other city workers.  By then, there was no dispute that some city skullduggery had helped shaped the outcome of the 1914 elections.

James Allison, Frank Wheeler, George Marrott, Thomas Taggart and former governor Samuel Ralston were among those who accompanied Bell to the U.S. Marshall’s office to post a $10,000 bond. The case went to trial on January 30, 1918, less than a month after Bell’s term ended.  Much of the state’s evidence mirrored the stories told by witnesses in the first trial.

After 22 hours of deliberations, the jury reported that it was hopelessly deadlocked on the issue of whether Bell and his co-defendants engaged in a conspiracy to corrupt the 1914 general election. The charges were later dismissed and Bell returned to the practice of law. 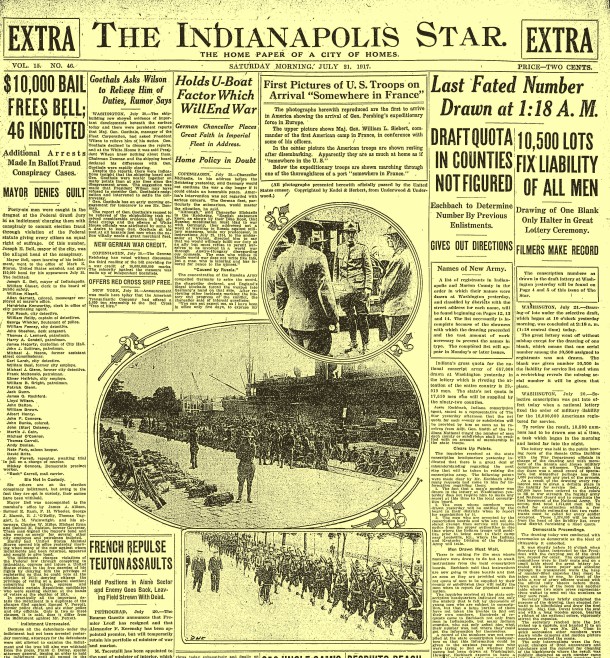 Although Bell had successfully dodged the metaphorical bullet twice, the third time did not prove to be a charm for the former mayor.  In 1923, Joseph Bell accidently took his own life while cleaning a gun.

But by then, the city had moved well-beyond the scandal of the Bell years.  A different kind of trouble was brewing at City Hall, but this time it involved Republicans and the Ku Klux Klan.  To learn more about the 1925 election scandal that led to the arrests of the governor, the mayor and a number of other local officials, see Indianapolis Collected: D.C. Stephenson’s Revenge. 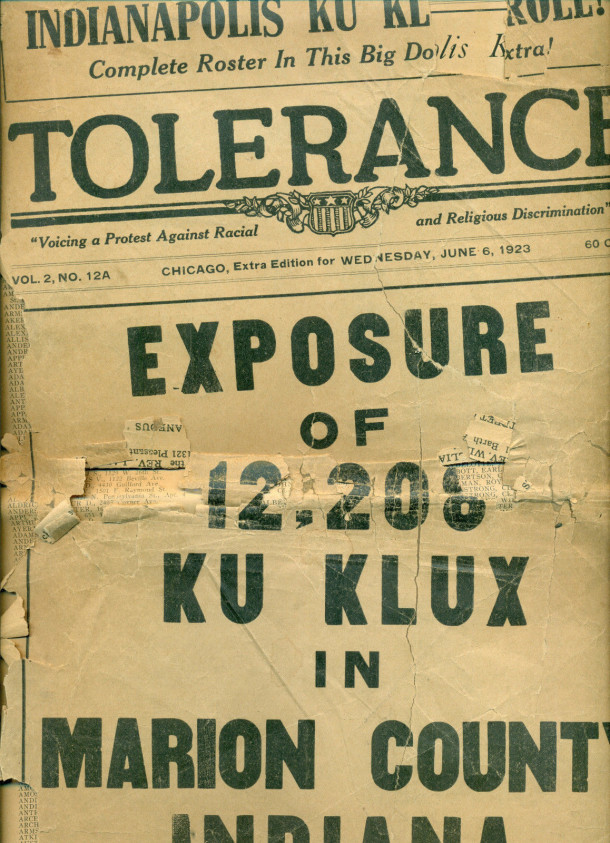 This 1923 issue of Tolerance listed the names of 12,208 Indianapolis residents who reportedly were members of the Ku Klux Klan. It sold last week on eBay for $44. 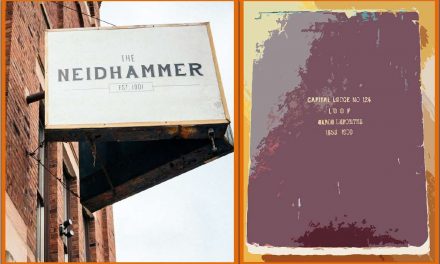