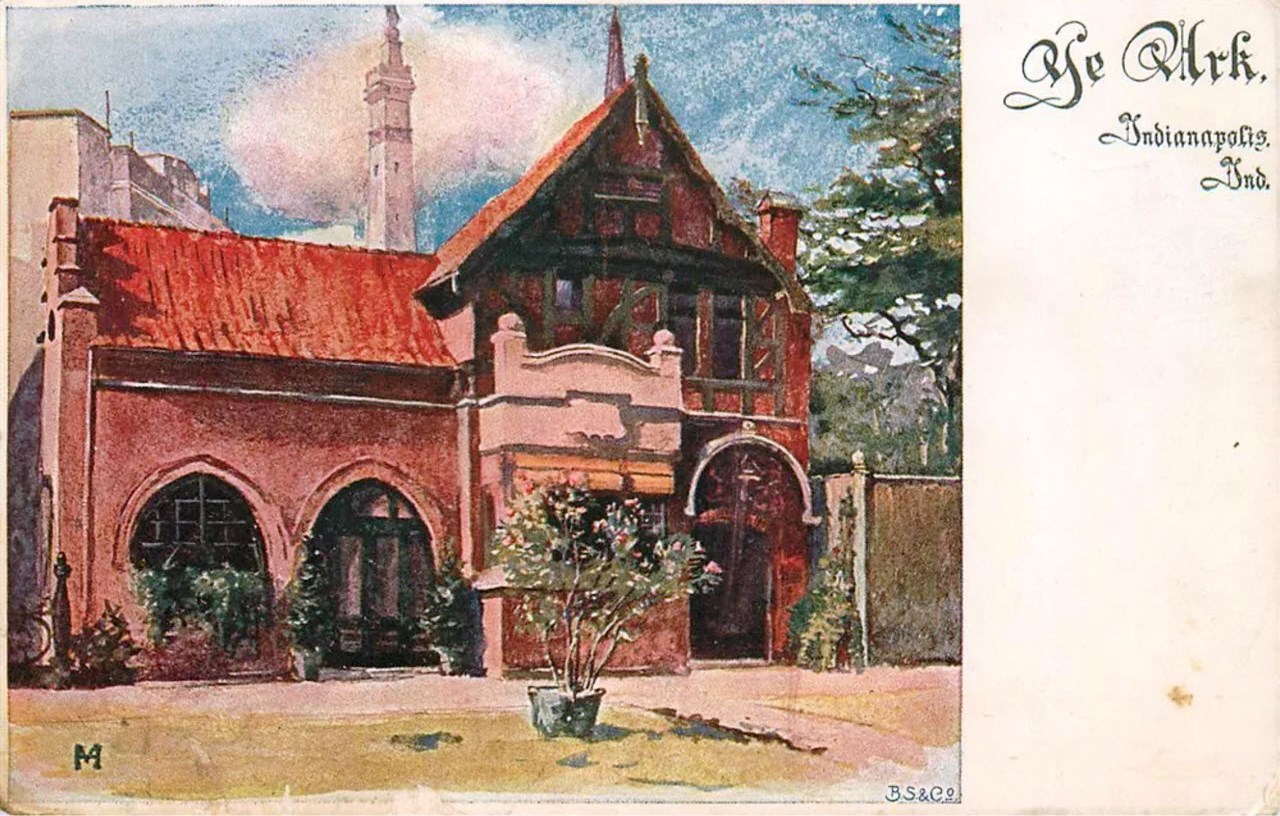 A few months ago, an old photograph of a young woman named Dora Stevens was auctioned on eBay.  According to the seller, the photo came from a circa-1890s album owned by a Miss Addie Knight of Indianapolis.  I was curious about both women, so I searched their names on newspapers.com in hopes of finding some articles that could shed light on their identities.

Knight apparently lived a life free from both notoriety and fame, in that no mention of her could be found in the local newspapers. Stevens was not so fortunate, however.

The Indianapolis News, April 11, 1898. The article notes that Stevens’ real last name was York and that she hailed from Columbus, which makes it unlikely that she is the same Dora Stevens shown in the photo.

On a warm spring evening in 1898, a woman who called herself Dora Stevens visited Brighton Beach, a shady roadhouse near 21st and Senate Avenue. Located alongside the canal on Brighton Boulevard, the roadhouse was frequented by unsavory characters and had earned a reputation as one of the toughest places in the city.

During her evening at Brighton Beach, Stevens reportedly drank whiskey. The following morning, she followed it with a chaser of Paris Green, an arsenic-laden rat poison.  According to one of her friends, Stevens was unemployed, broke and despondent with her lot in life. “She said that there was nothing ahead for her; that if she followed an evil life, she would go to hell,” her friend told The Indianapolis News, “[S]he would prefer to go there by the suicide route.”

But Stevens’ wish was not to be granted.  Physicians were called to her room in the Hendricks Block, where they successfully revived her along with another girl who had also ingested poison. This was Dora Stevens third failed attempt at suicide, and would not be her last.

Such stories were common around the turn of the last century, when jobs were scarce for women.  Young girls who needed work were easy prey for unscrupulous men who lured them to taverns to trade on their innocence. As police began to crack down on taverns, the girls’ reputations were not the only things to be ruined. In 1907, a similar tale of an intoxicated girl and a failed suicide finally sunk Ye Ark, a popular tavern in the shadow of Monument Circle. 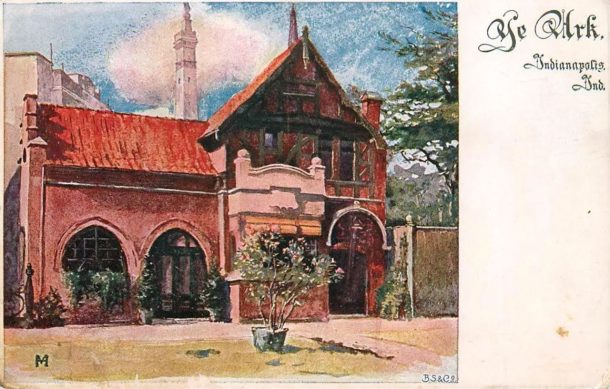 Ye Ark opened around 1903 at 15 East Ohio Street, a site now occupied by Salesforce Tower. With its hearty German fare and quaint exterior, the restaurant initially drew a respectable crowd who would dine there for lunch or after the theater. During those early years, Ye Ark was notorious for only one thing — its resident dog, Snip, who turned somersaults and performed other tricks for customers.

But by 1905, news stories began cropping up that made clear a different kind of tricks were now being turned at Ye Ark. 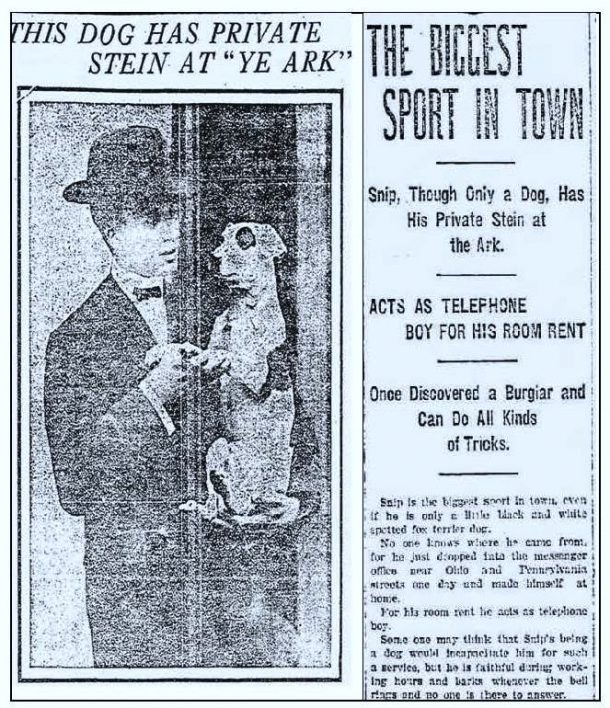 Ye Ark and taverns of similar ilk became the focus of the 1905 mayoral contest between former Mayor Charles Bookwalter and incumbent John Holtzman.  Two weeks before the election, Bookwalter dropped a last-minute bombshell when he told an eastside audience that his opponent’s administration granted police protection to “resorts,” as brothels were commonly called, so long as the resort and its female “inmates” followed a strict set of regulations. Bookwalter also maintained that under Holtzman’s watch, a growing number of taverns featured “wine rooms” – a private or secluded area that allowed male patrons to drink privately with women in violation of state liquor laws.

A few days after Bookwalter’s speech, The Indianapolis Star set up a sting operation.  Two men were dispatched to 50 downtown-area bars on a Sunday afternoon when taverns were supposed to be closed.  The diligent researchers subsequently reported that they were not denied admittance to a single establishment, although in some instances they had to gain entrance through a back door.  Once inside, they discovered free-flowing alcohol, widespread gambling, and women drinking with men both in plain sight and in private wine rooms.  Ye Ark was cited by the Star as one of the Sunday-sales scofflaws, along with the Claypool Hotel, the English Hotel, and St. Elmo’s. 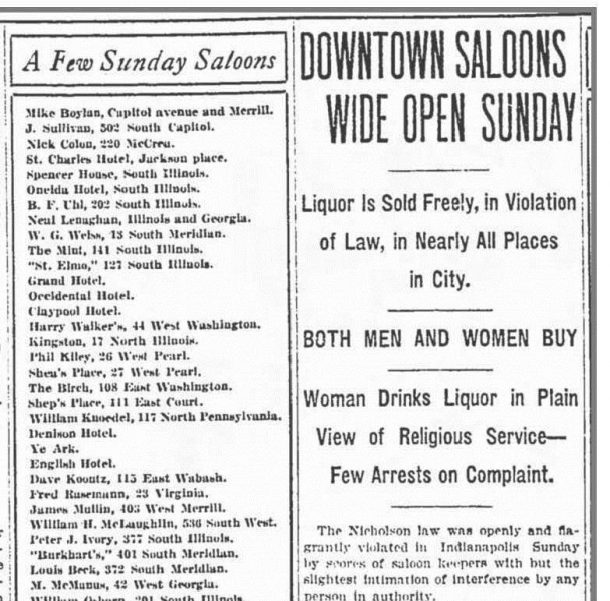 With just five days remaining before voters went to the polls, the Prohibition Party released a damning report on its “slumming” visits to local taverns and resorts. Despite Holtzman’s assertion that his administration had wiped out all of the wine rooms, the Slummers, as they were called, discovered numerous instances of women drinking beer and smoking cigarettes while in the company of men. Ye Ark was one of the most flagrant violators according to the report, which noted that the bar was “full of men and girls at 11:30 o’clock Saturday night; nineteen girls drinking beer in private rooms provided for them; acting very improperly.”

Although it was not illegal for a woman to enter a tavern and drink an alcoholic beverage with a male companion, the liquor law in effect at the time – the Nicholson Law — included several restrictions aimed at protecting vulnerable females from ruin.  Among other things, the Nicholson Law limited alcoholic beverages in bars and taverns to a single licensed room, prohibited curtains, blinds, or anything else that blocked a clear view of the barroom, and banned the playing of piano music “for amusement.”

Holtzman was trounced in the election. Over the next year, Bookwalter started cracking down on bars that violated the Nicholson Law. 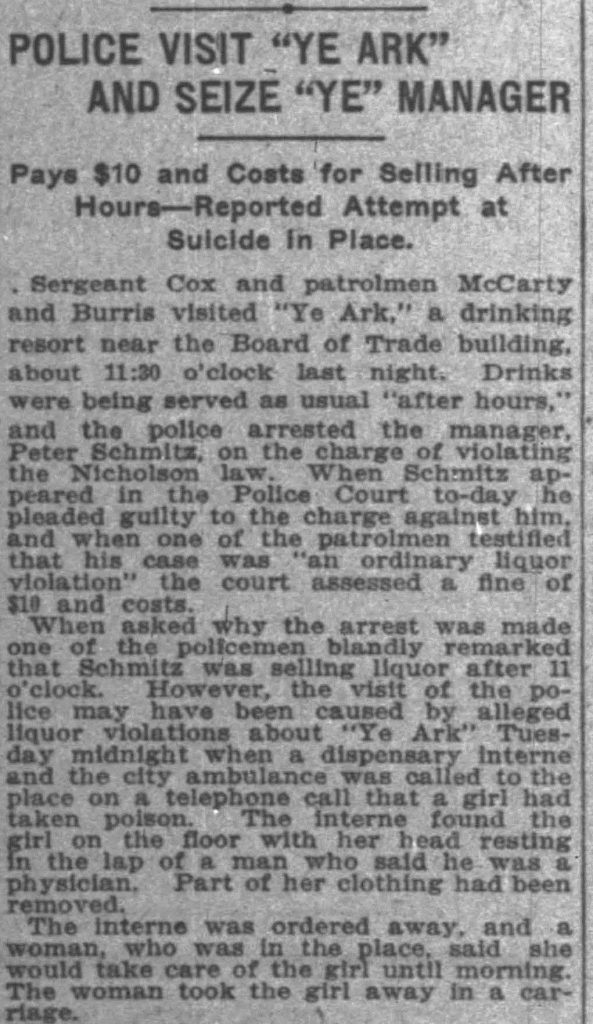 Mayor Bookwalter went on the warpath.  In April 1907, he instructed the police chief to do everything in his power to shut down Ye Ark and other bars frequented by women and girls. “Women have no business about saloons,” he wrote in a directive to the chief. “[A]ny saloon catering to this class of trade should be given especial attention by your department.” 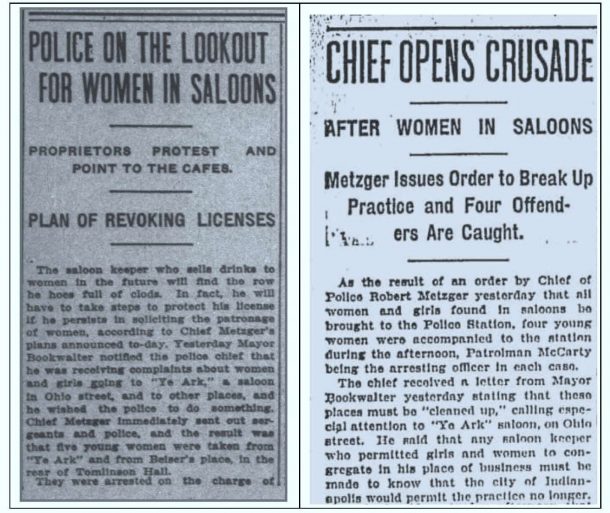 The tavern owners that served food with their liquor cried foul, pointing out their establishments should be treated the same as the restaurants and cafes in the city’s large hotels where women were allowed to drink.  And despite a series of arrests for various violations of the Nicholson Law, Ye Ark managed to stay afloat for the next several years.

In 1910, however, the police came a-knocking and found the boat a-rocking.  Described by The Indianapolis News as “a saloon resort … where the festive highball and cocktail mingle, where the jingle of glasses mingles with the strains of an electric piano, and where women rub their elbows on the same ‘booze’ tables as men,” Ye Ark also became the scene of a crime when police discovered an underage orphan drinking with an older man. The bar’s manager was arrested again and fined $25. The young girl was taken into custody in hopes of placing her in a good home.

But unbeknownst to its owners, Ye Ark was nearing the end of its voyage.  In February 1911, the owners of the property where Ye Ark was docked announced plans to level the tavern and surrounding houses and erect the 10-story Hume-Mansur building. 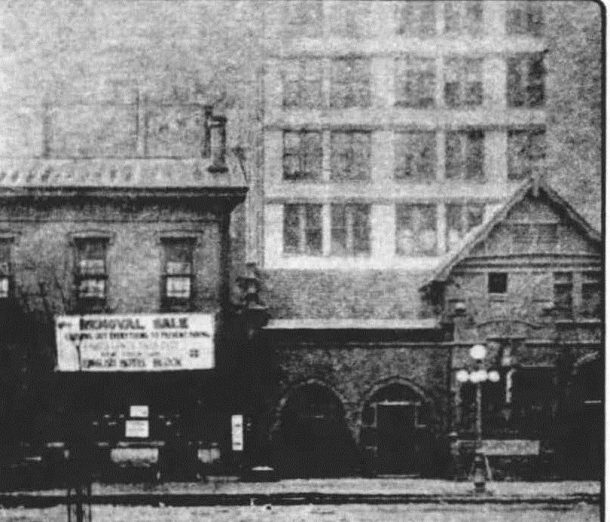 Following the repeal of Prohibition, state lawmakers rejected efforts to reenact the Nicholson Law, and instead adopted a brand new set of restrictions on the sale of alcohol in Indiana. Many of these restrictions remain on the books today, frustrating a whole new generation of beer-drinking Hoosiers.

In 1935, the term “Nicholson Law” was resurrected by the General Assembly when Rep. Roberta Nicholson authored legislation to ban lawsuits for seduction, alienation of affection, and breach of an engagement promise. The daughter-in-law of author Meredith Nicholson and the only woman in the legislature, Rep. Nicholson maintained that so-called “heart balm” lawsuits were really legalized blackmail of wealthy men by unscrupulous lawyers and greedy women.

Republicans tried to kill the bill by offering a poison-pill amendment that exempted “sugar daddies” from the ban. The effort was unsuccessful, however, and the Nicholson Law 2.0 became a model for other states.