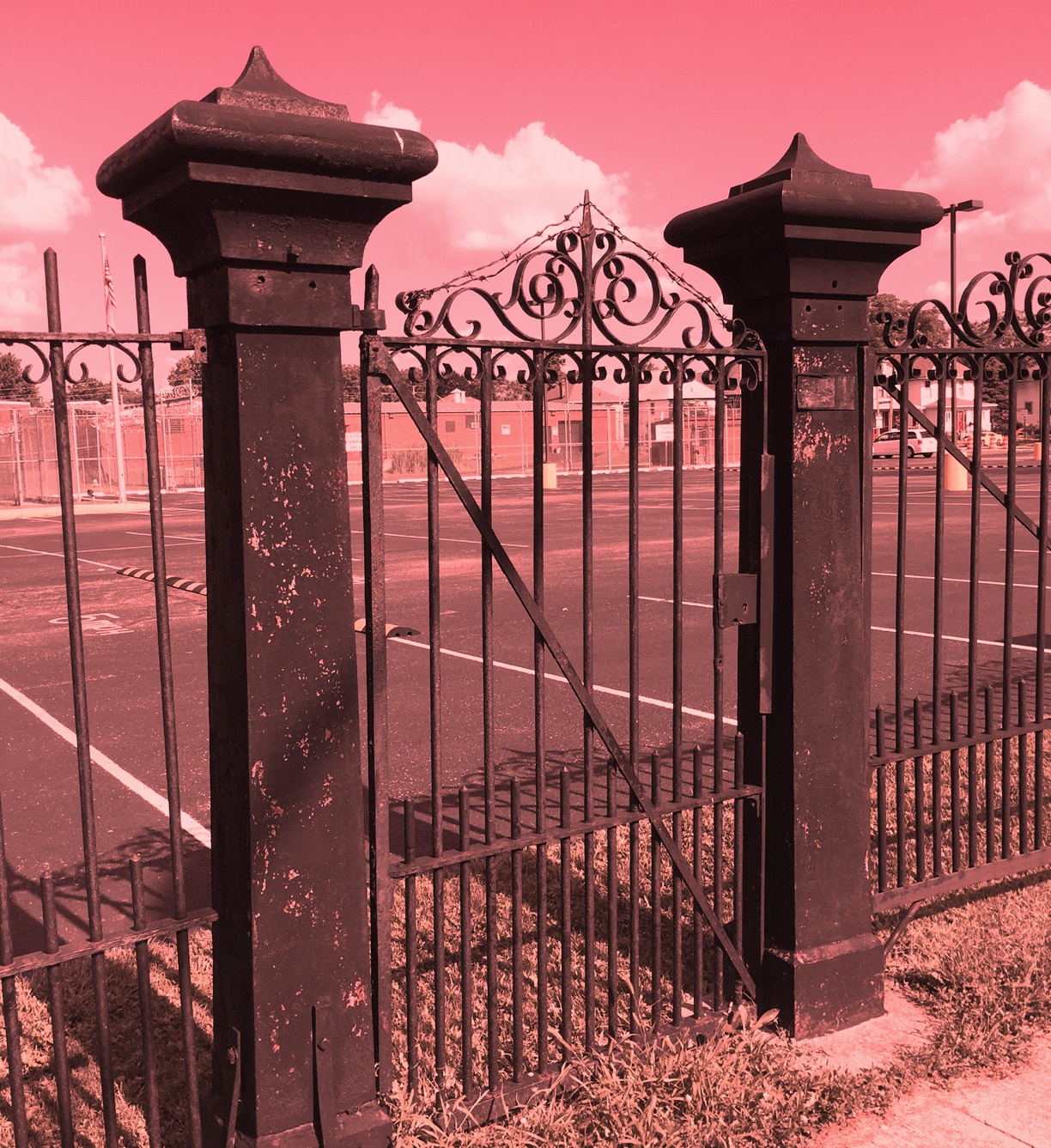 An undeveloped area just east of downtown was the hottest place in Indy during the sweltering summer of ’73. Middle-class families seeking to escape the grime and bustle of the city were eagerly buying up lots in the new neighborhoods of Arsenal Heights and Highland Park.  And for the more affluent, James O. Woodruff was putting the finishing touches on a “residential park” that would feature stately homes, landscaped esplanades, marble statuary, and cast-iron fountains.

As The Indianapolis News had predicted the previous December, “No direction is looked upon with more favor at the present, than the East of our city……The east must, and will, become the location for better class of residences.” 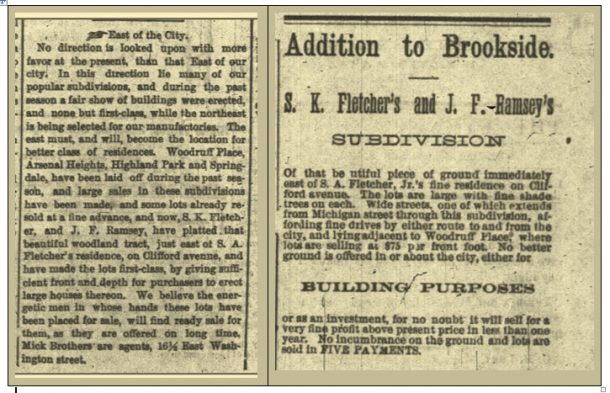 But the newspaper’s sunny prediction was put to a test in October 1873, when 17 women moved into a palatial brick home directly across the street from Woodruff’s idyllic retreat.

On that day, as the saying goes, there went the neighborhood. 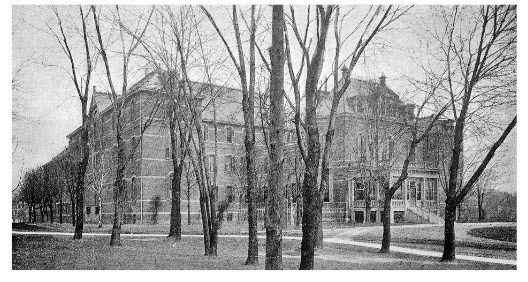 The Indiana Reformatory Institution for Women and Girls

The day started out on a high note, as the new neighbors were welcomed with considerable pomp and circumstance. A police escort accompanied them from the train station.  A group of politicians and prominent citizens were on hand to greet them, including Gov. Thomas Hendricks and his wife.

Unusual? Yes, but certainly warranted, given the fame — or more accurately, the infamy — of the new arrivals, which included: 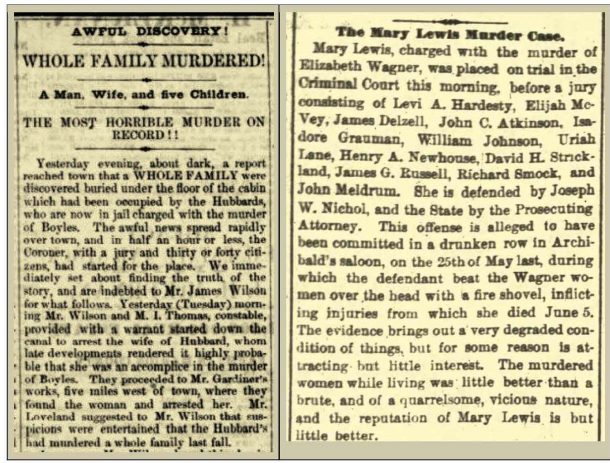 All told, the 17 original inmates of the Indiana Reformatory Institution for Women and Girls at 401 N. Randolph Street included one forger, 10 thieves and six convicted killers.  They were soon joined by more women inmates with equally auspicious backgrounds, as well as 21 girls ranging from ages 10 through 14.

Over the next 136 years, thousands of female felons lived across the street from Woodruff Place, including Gertrude Baniszewski, convicted in 1966 for the torture slaying of 16-year-old Sylvia Likens, and Paula Cooper, who became Indiana’s youngest Death Row inmate in 1986 when she was sentenced for the stabbing death of Bible teacher Ruth Pelke.

In 2009, however, the state Department of Correction decided to relocate the women’s prison to the former Indianapolis Juvenile Correctional Facility on the city’s west side.  The old prison was repurposed as a transitional facility to help soon-to-be-released male offenders prepare for their reentry into society.

Then, on June 14, 2017, DOC announced that the 15-acre prison campus would be shuttered for good. 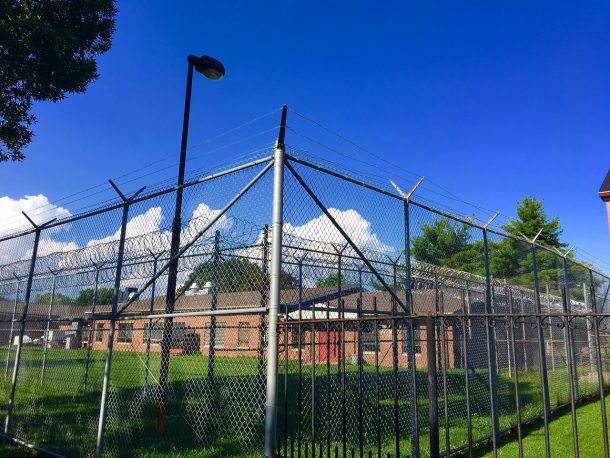 Most years when I go to the Woodruff Place Flea Market, I park on Randolph Street next to the prison.  There, I’ll see families unloading strollers from their cars and couples heading back from the sales with their arms full of newly purchased treasures. No one seems to notice the razor wire glinting in the sunlight.

But sometimes I ponder how a prison came to be the next-door-neighbor to one of the city’s most elegant neighborhoods.  Didn’t Woodruff and his neighbors cry “NIMBY” when the state decided to build a prison in their backyard? Surely they did. 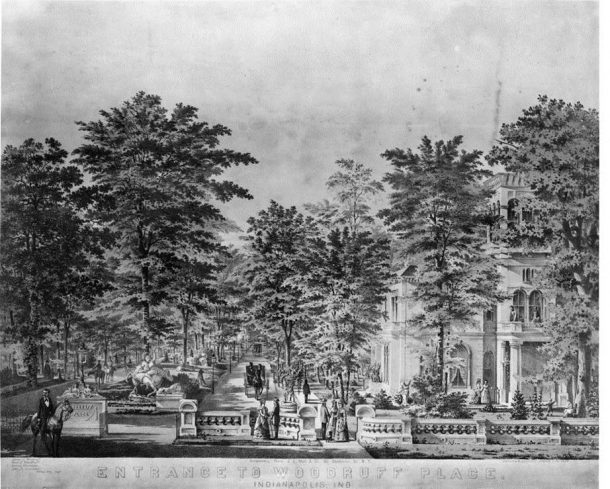 An 1888 engraving of the entrance to Woodruff Place.

But as it turns out, it was Woodruff himself who made the decision.

In 1867, a group of Quakers visited the Indiana State Reformatory at Jeffersonville, where female offenders were housed in quarters adjacent to the men’s prison. There, the visitors heard harrowing tales of sexual abuse and mistreatment by the all-male staff, especially when the women took their weekly baths. As one of the visitors, Rhoda Coffin, later related in her memoir:

On Sabbath afternoons the women prisoners were brought out and compelled to strip, and thus exposed, compelled to run from the opposite side of the court and jump into the water, the guards using, if necessary, their lashes to drive them out to the howling amusement of their guards and their friends who were permitted to be present; keeping it up as long as they pleased.

The horrific treatment of the women was reported to Gov. Conrad Baker. A legislative investigation was launched that confirmed the details in the Quaker report and discovered even more extensive abuses.  Gov. Baker and the Quaker women lobbied for passage of legislation to construct a separate prison for women.  A bill establishing the Indiana Women’s Reformatory for Women and Girls became law on May 13, 1869.

A site was selected on state-owned property east of the city. By November 1869, excavation had begun for the first prison in the United States that was built exclusively for women. 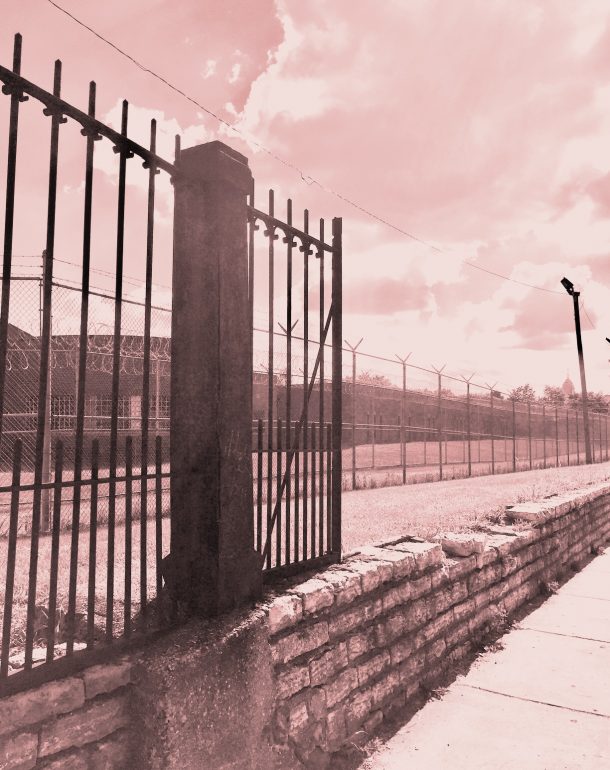 Remnants of the prison’s old iron fence with its limestone base are still visible on East Michigan St.

The main building of the new prison was nearly completed in 1872 when Woodruff purchased 77 adjacent acres to build an exclusive residential park which would later be named “Woodruff Place.” Soon other developers set their sights eastward.

Lots were quickly snapped up in the newly platted Arsenal Heights and Brookside neighborhoods. Stoughton Fletcher broke ground on a new housing development east of his opulent mansion on Clifford Avenue (now 10th Street). Even Isaac Hodgson — the architect of the women’s prison — got in on the action, announcing in 1873 his plans to plat a new subdivision called Rose Vale on the north side of Clifford Avenue just east of Woodruff Place.

Isaac Hodgson’s original plan for the prison (above) included three separate sections. Due to cost constraints, only the center portion was built.

Construction of these new east-side neighborhoods stalled for a few years following the bank panic of 1873, but the area rebounded in the 1880s as the economy improved.  And although “location, location, location” was just an important in the 1880s as it is today, prospective home buyers seemed undaunted by the fact that their expensive new homes would be located within spitting distance of a state prison.

This apparent lack of concern was likely rooted in the prison reform movement of the late 1800s. The original building that housed the female prisoners bore little resemblance to a prison. Instead, it was designed by Hodgson to be “graceful and imposing,” with interiors that looked more like a middle-class residence than a jailhouse. Reformers believed that by exposing wayward women to religion and refinements, they would lead a straight and orderly life upon release from prison.

But within a few years, it became clear that many of the inmates would never comport themselves in the ladylike manner envisioned by reformers. To make matters worse, the prison was overcrowded, and young girls of a tender age — including many children whose only “crime” was homelessness” — were jammed in close quarters with adult inmates.

In its wisdom, the legislature recognized that it was bad public policy to house children with hardened criminals, so in 1899 the General Assembly established the Indiana Industrial School for Girls. At the same time, however, it failed to fund a new facility.

This 1902 map shows the original sites of the three state facilities that legislators sought to relocate in the early 1900s.

In 1901, Sen. Fremont Goodwine of Williamsport sought to fix the funding dilemma with an innovative plan.  Demand was growing for land within the city of Indianapolis, so Goodwine proposed selling the 15 acres adjacent to Woodruff Place, along with the property at Washington and State Streets where the Indiana Asylum for the Deaf and Dumb was located and the two city blocks downtown that housed the Indiana Asylum for the Blind.  The proceeds for the sale would be used to construct new, modern facilities at cheaper locations outside of Indianapolis. The bill failed.

The following session, Goodwine proposed a slimmed-down version that focused on selling the eastside property and separating the girls from the women. Michigan City was the frontrunner for the site of the new prison. That proposal failed too.

Another four years would pass before funding was finally provided to build a separate reform school for girls. But the women’s prison stayed put on the near eastside. 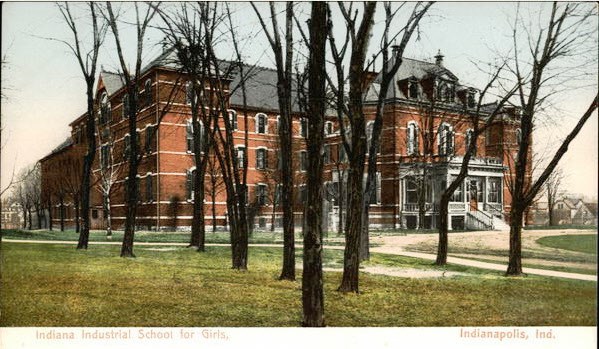 In 1909, newly elected Gov. Thomas Marshall joined the fight for construction of new women’s prison.  Proponents of Marshall’s plan believed that the eastside property could be sold for $100,000, which would completely offset the state’s cost to build a new prison on larger acreage at a different location.

At a Senate hearing on the bill, the city building inspector testified that the prison was a firetrap and the conditions he found there “made his hair stand on end.” A number of persons who lived nearby also testified in support of moving the prison, claiming that their sole interest in the matter was the safety of the inmates.  But just like its predecessors, this bill failed too. 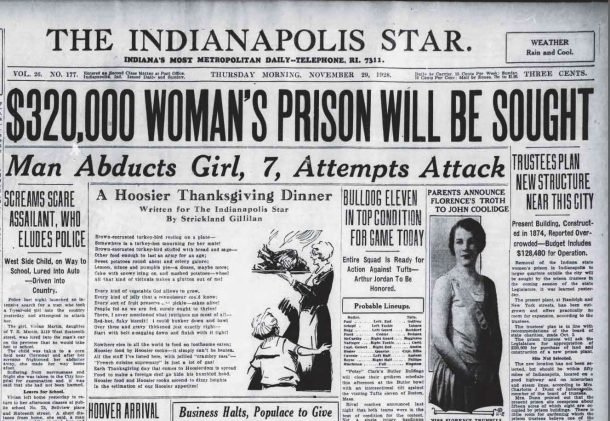 Despite renovations, the aging prison remained a safety concern. In 1929, the prison’s trustees unsuccessfully sought $320,000 for construction of a new facility at a different location in central Indiana. Two years later, a group of eastside civic organizations also failed to gain passage of a proposal to move the female prisoners to the Indianapolis Hospital for the Criminally Insane in Julietta, a small hamlet on the far-eastside near the Hancock County line.

This time, the prison’s neighbors were frank in expressing their concern about the impact of the prison on their property values.  If the bill passed, they hoped the vacated prison property could be redeveloped with new homes or used as a park. 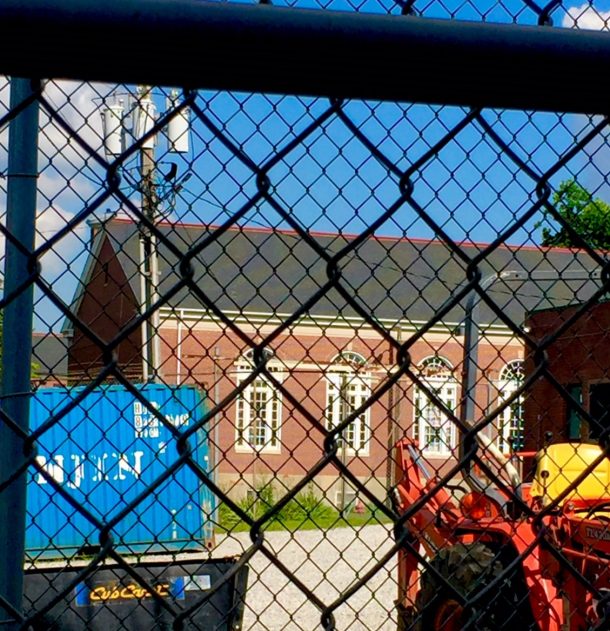 The chapel was built by WPA workers in 1939. It’s visible on the Randolph Street side.

Over the next few years, the Department of Public Welfare studied several different proposals for relocating the women’s prison.  But the Great Depression had emptied the state’s coffers and robbed the eastside property of any resale value.  Instead of the long-anticipated move, WPA workers razed the old building that faced New York Street and constructed new cottages, a hospital, an administration building and a stately chapel at the same location.

The 1970s brought another push to move the women’s prison out of the city, to either the grounds of the Indiana Girls’ School in Clermont or the Indiana Boys’ School in Plainfield.  But after a two-year legislative study, Gov. Otis Bowen announced in 1974 that the $1.5 million price tag was prohibitive. The best course of action was renovation, not relocation.

The century-long debate over relocation finally came to end in June when DOC shut down the prison. To date, the state has remained mum on its future plans for the property. 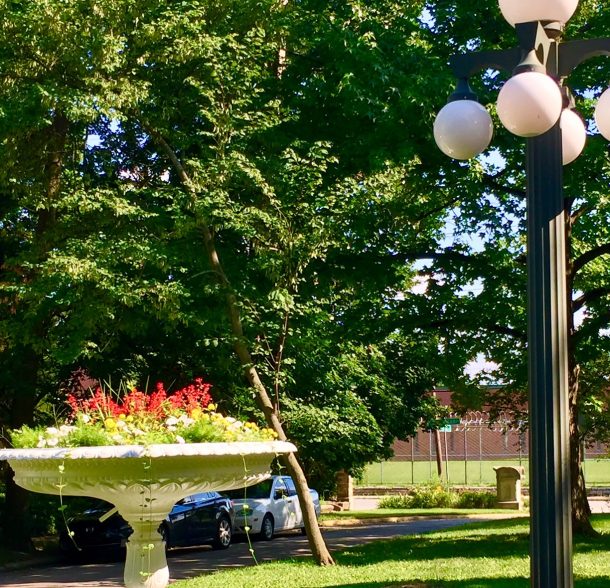 A glimpse of razor wire topping a chain link fence, as seen from Woodruff Place.