“Every picture tells a story don’t it,” Rod Stewart famously sang in the early 1970s, the same decade that brought us other grammatical atrocities in song titles such as “Baby I’ma want you.” But sometimes the story told by a photograph is not the truth, but an artful work of fiction that gets repeated every time the photo is reproduced. Or as British journalist Harold Evans wrote in 1978, “The camera cannot lie, but it can be an accessory to untruth.”

Hollywood celebrities are especially adept at using the camera to paint a tale of their lives that may not be entirely accurate. Hoosier-born actress Carole Lombard was no exception, relying on lighting and photo retouching to mask the scars on her face from a catastrophic automobile accident in her teens.

But on January 15, 1942, Lombard may have pulled off the biggest photo scam of her career by tricking news photographers, local dignitaries, and hundreds of fans and bystanders into believing that she had just arrived via train at Union Station to headline a WWII bond drive when in fact she had flown to Indy the evening before to secretly meet with a palm reader who would warn the star of her imminent death. 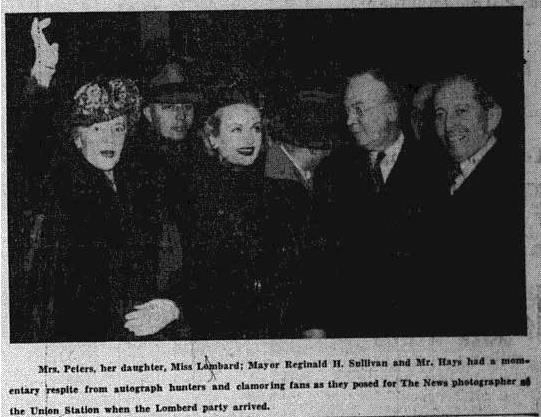 I first learned of the possible staged photo two months ago, when I received an intriguing email with a subject line that read, “Libby, I have a very cold case.”

The out-of-the-blue message was from Robert Matzen, author of Fireball: Carole Lombard and the Mystery of Flight 3, a haunting look at the Hollywood star’s final days and her ill-fated flight from Indianapolis that ended in a fiery crash on a Nevada mountainside on January 16, 1942.

When Matzen visited Indy in 2014 as part of the Fireball book tour, he learned for the first time that according to local lore, Lombard met with a famous Indianapolis palm reader in the final hours of her life who predicted Lombard’s impending death. Matzen is now working on an expanded paperback edition of Fireball to coincide with the 75th anniversary of Lombard’s death, and is trying to verify the story. 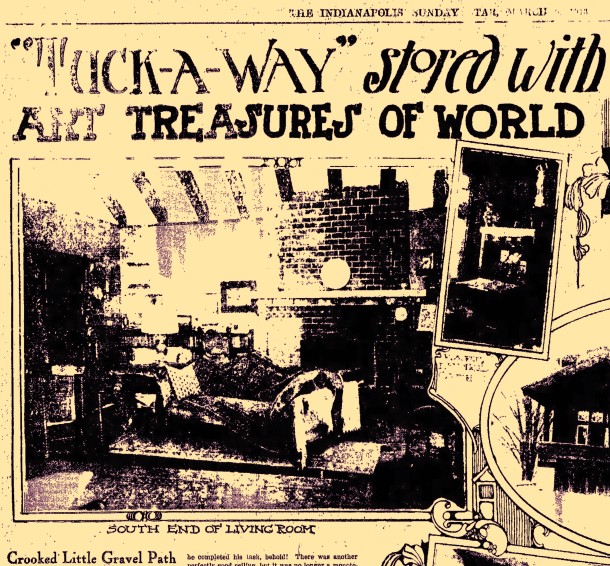 If you’re an Indianapolis history buff, you’ve probably heard the story, which was repeated with frequency and flair by Ken Keene, the late owner of an historic Meridian Park bungalow built in 1910 by famed Indianapolis palm reader Nellie Simmons Meier and her husband, fashion designer George Meier.  During her remarkable 40-year career, Nellie Meier read the palms of hundreds of famous actors, writers and politicians, many of whom visited Tuckaway, the Meiers’ charming home at 3128 Pennsylvania Street.

Keene purchased Tuckaway and most of its contents from Meier’s niece in 1972, thirty years after Lombard’s death. In 1977, he told The Indianapolis Star that Meier that had warned Lombard of imminent danger when the actress visited Tuckaway during the war bond drive in January 1942.  Lombard was killed a few hours later.

Although it’s unclear how Keene may have obtained this information, he repeated the story frequently and with great relish.  I even heard him tell it once, on a summer evening about 20 years ago, as we sat in Tuckaway’s dimly lit parlor and listened raptly to Keene’s stories of the bungalow’s famous occupants and the ghosts they left behind. 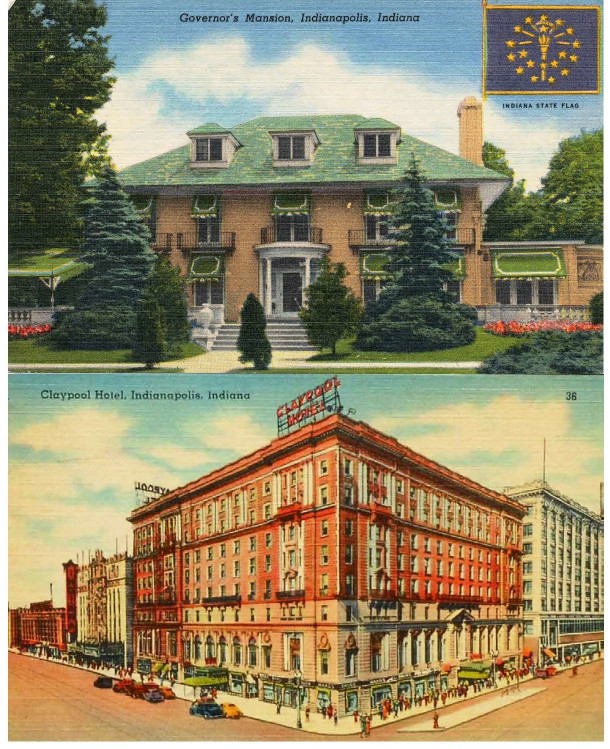 Lombard, who at the height of her career was the highest-paid female star in Hollywood, spent the day before her death in Indianapolis launching a war bond drive that sold over $2 million in bonds to aid the war effort.  According to newspaper reports, Lombard boarded a train in Chicago on the morning of January 15 and arrived at Union Station at 1:35 p.m., where she was met by Mayor Reginald Sullivan and other dignitaries. She then embarked on a jam-packed day of activities that included a bond drive at the Statehouse, a flag raising at the Claypool Hotel, tea at the Governor’s Mansion and a patriotic rally at Cadle Tabernacle.

After the rally, Lombard returned to her suite at the Claypool Hotel, visited with some Indiana relatives, and then left the hotel shortly after 2 a.m. to board a plane to Los Angeles, where she shared a home with her husband, Clark Gable.

Given her frenetic schedule of public appearances, Matzen believes that the only way Lombard could have found time to meet with Meier was if the star secretly flew to Indianapolis the evening before the bond drive, stayed overnight at the Claypool Hotel, and then met up with the rest of her traveling party that afternoon at Union Station to make it appear as if she had just arrived with them via train. 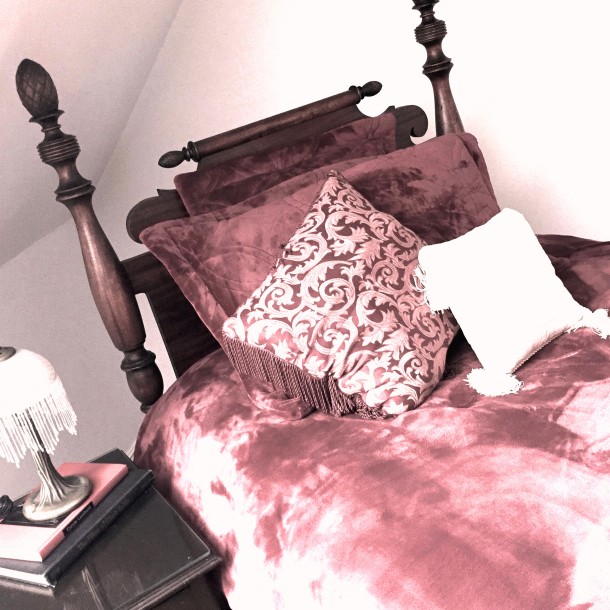 The bed from the Claypool suite where Carole Lombard stayed the night before her death. The Propylaeum acquired the bed and other furnishings from Lombard’s room at an auction in 2000.

As implausible as that may sound, Matzen does have some evidence to support this theory.   Life magazine photographer Myron Davis was assigned to cover Lombard’s trip to Indiana, and was at Lombard’s side most of the time during the final three days of her life. In 2009, Black & White magazine interviewed Davis about his Lombard photographs, which are among the last ever taken of the actress who charmed America with her beauty and mad-cap wit.  Davis said:

Lombard didn’t like flying, and had taken a train from Los Angeles that was bound for Chicago. The train made a brief stop in Salt Lake City on January 13, where she spoke to people waiting on the platform and sold some war bonds. Then she got back on the train and proceeded to Chicago, where she sold more bonds and did some interviews. From Chicago she flew to Indianapolis on Wednesday evening, and met her mother at the train station the next morning.

In researching the expanded edition of Fireball, Matzen found flight schedules from 1942 that show flights arriving in Indy from Chicago on the evening of January 14.  He’s now looking for any evidence that Lombard stayed at the Claypool or another local hotel the evening before the bond drive, and contacted me after he ran across an HI article I wrote several years ago about the huge sale of artifacts from the Claypool when the hotel was demolished in 1969.  Matzen was hoping that I might know what happened to the guest registers from the Claypool.

Unfortunately, I have been unable to find any information about the guest registers, but am hopeful that an HI reader may know if they were spared from the trash heap when the Claypool was demolished.  During the hotel’s heyday, it was common practice for guests to sign a register, which means that if the guest registers survived, they bear the signatures of hundreds of celebrities and politicians who stayed at the Claypool during the storied hotel’s nearly 70-year history. 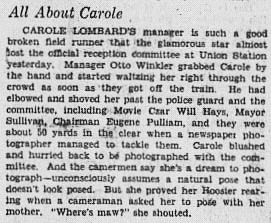 I did find an interesting tidbit in The Indianapolis Times. On January 16, 1942, Times columnist Lowell Nussbaum wrote:

[T]he glamorous star almost lost the official reception committee at Union Station yesterday. Manager Otto Winkler grabbed Carole by the hand and started waltzing her right through the crowd as soon as they got off the train. He had elbowed and shoved her past the police guard and the committee… and they were about 50 yards in the clear when a newspaper photographer managed to tackle them. Carole blushed and hurried back to be photographed with the committee.

Although Nussbaum’s column lends credence to the theory that Lombard flew to Indianapolis the evening before the bond drive and then staged a fake arrival by train, it doesn’t shed any light on the question that has been nagging at Matzen: Did Nellie Simmons Meier predict Lombard’s death? As Matzen wrote in an email to me, “This is such a chilling story, if true, and adds to a truly macabre set of events that led up to the plane crash near Las Vegas.”

It’s been nearly 75 years since Carole Lombard’s death, and all of the people who had first-hand or even second-hand knowledge of the events at Tuckaway in January 1942 are dead.  Nellie Simmons Meier died of diabetes in 1944. Her niece, who was living at Tuckaway in 1942 and who sold the house to Keene, died in 1973. Myron Davis, the Life photographer who chronicled the last days of Carole Lombard’s life, was killed in a house fire in 2010. And Ken Keene, the longtime caretaker of Tuckaway and its myriad secrets, died in 2015.

Tuckaway has been empty since Keene’s death last year, but a 1930s photograph of Carole Lombard still hangs on the wall. The handwritten inscription from Lombard to Meier reads, “With my sincere belief of your greatness, and your sweetness in helping me.” 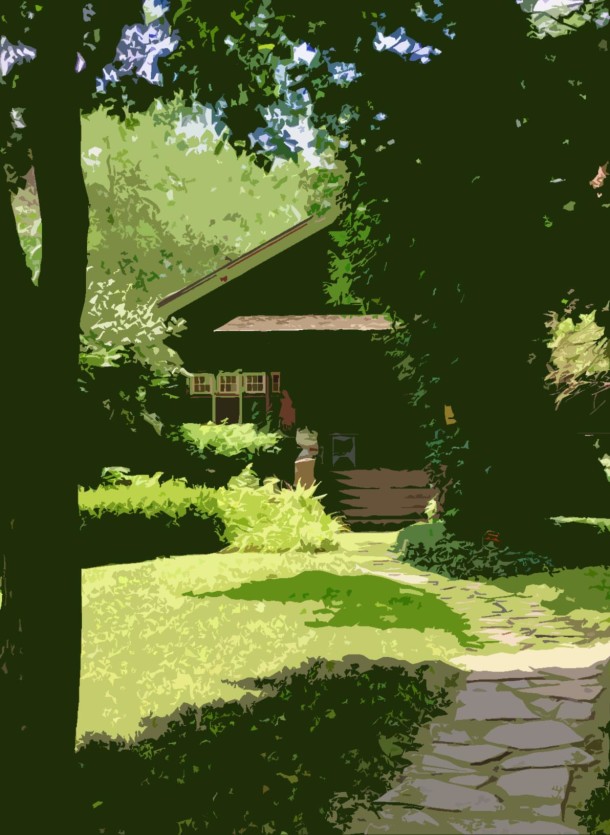 For more information about Tuckaway and its famous occupants, George Philip Meier and Nellie Simmons Meier, check out local historian Connie Zeigler’s latest work, Life By Design: The Meiers of Tuckaway. It’s beautifully written and filled with amazing photos of the Meiers and their home.