For Mrs. Lottie A. Kinsey, life on the corner of 15th and College Avenue was a lot like an AC/DC song.

Although another eight decades would pass before the Australian rockers recorded their classic ballad, “You Shook Me All Night Long,” Mrs. Kinsey was experiencing many of the symptoms described in the lyrics, albeit for a different reason.

In a voluminous lawsuit filed in July 1903, Kinsey complained that her walls were shaking, the earth was quaking, and her mind was aching — all because her once-quiet street had turned into the Highway to Hell. 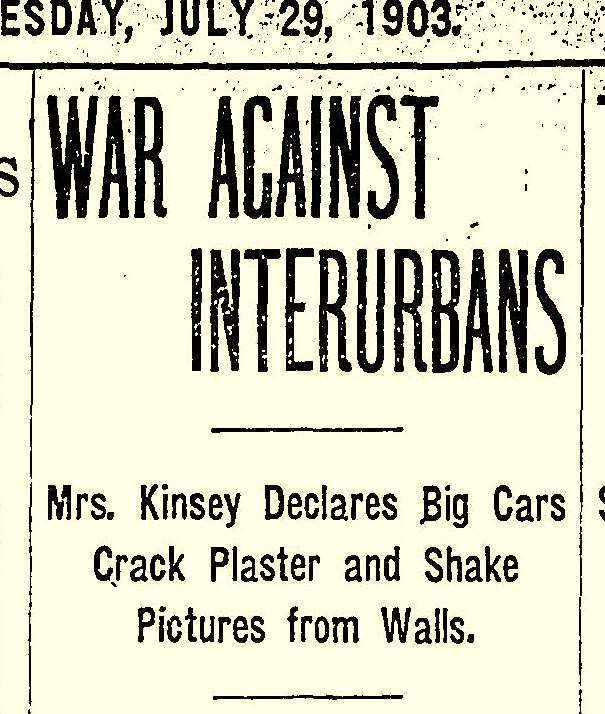 The reason for this onslaught of problems was the arrival of the interurban railroad. While College Avenue had been a primary route for mass transit since the advent of mule cars in the late 1800s, Kinsey contended that none of the property owners who purchased opulent homes along the tree-lined street ever imagined that they would end on the wrong side of the tracks.

But in 1898, the Indianapolis Street Railway Company obtained a 30-year franchise to operate electric streetcars in the city. Under the terms of the franchise, the local railway company was required to let any future interurban system use its tracks with the consent of the city. Soon, dual tracks were laid down the middle of College Avenue, together with a system of iron poles and wires strung along one side of the street.

Kinsey and her neighbors did not object to the local trolleys that ran in front of their houses, at least not at first. The problem arose in 1902, when the large interurban cars started rolling down College Avenue at a high rate of speed with their heavy loads of passengers and freight from other cities.

These interurban cars, Kinsey claimed, caused her 15-room house at 1504 College to vibrate, cracking plaster and shaking pictures from the walls. The fast-moving cars swept clouds of “germ-laden” dust into her house. According to Kinsey, women drivers were steering clear of College Avenue because their horses would “take fright suddenly at the big cars.”

Kinsey asked the court to grant a permanent injunction against the interurban companies and to award her $2,000 in damages. 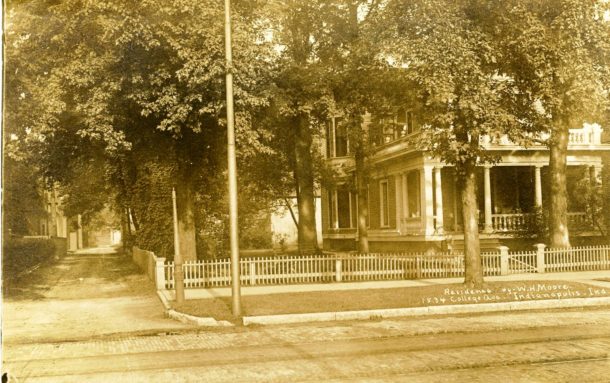 This real photo postcard from 1909 shows the College Avenue home of William H. Moore, president of Indianapolis Forest & Nurseries. The address was originally 1534 but was later renumbered 1540. Demolished in the 1960s, this house was representative of the homes that graced College Avenue in the early 1900s.

Kinsey was not alone in her litany of woes. Although she was the named plaintiff in the litigation brought against four traction companies and the Indianapolis Street Railway, Kinsey was representing a group of College Avenue property owners who had pooled their funds for what was expected to be a costly and protracted courtroom battle.

The lawsuit was a last resort for the College Avenue residents, who had been trying for months to obtain relief from the nearly non-stop train traffic that barreled down the middle of street at speeds of 20 to 30 miles per hour.  In April 1903, they persuaded the city council to introduce an ordinance that would set the speed limit for interurbans at 8 miles per hour, which was the limit established for the local street railway. 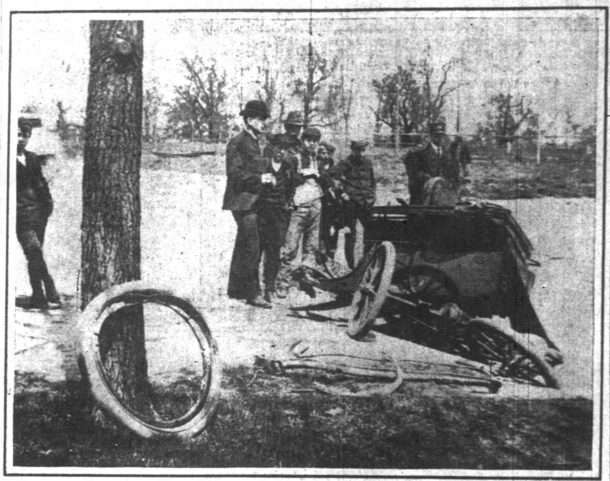 But the same day the ordinance was introduced, a car collided with a speeding interurban at the intersection of 27th and College.  The driver was thrown under the train.

Although the Union Traction Company disclaimed any responsibility for the gruesome accident, it ordered its cars to stay below 10 miles per hour on city streets and to slow down when approaching intersections.  College Avenue residents later complained to no avail these self-imposed limits were often ignored.

The speed ordinance was subsequently killed by a City Council committee. Around the same time, the council president was awarded a lucrative contract for stonework on the new Traction Terminal building and the committee chair won the exclusive contract for baggage-handling at the new station.

Early 1900s postcard showing the train shed on the west side of the Traction Terminal building.

Meanwhile, frustration continued to foment on College Avenue.  Just a few years earlier, many of the residents had paid higher prices for homes fronting the street because of its proximity to the mule car or streetcar lines. But the invasion of the interurbans was a different matter. Unlike streetcars and trolleys, these trains did not stop to pick up passengers in the neighborhood.  Instead, as one resident noted in a letter to The Indianapolis Star,  they sped down the middle of the street, “shaking the dishes in the cupboard with a screeching noise that rivals any calliope.”

In July 1903, the township assessor reduced the assessed value of all property on College between Massachusetts and Fall Creek by 20% to reflect the injury caused by the interurbans.  This may have been the last straw for the beleaguered property owners.  Two weeks later, Kinsey filed her lawsuit. 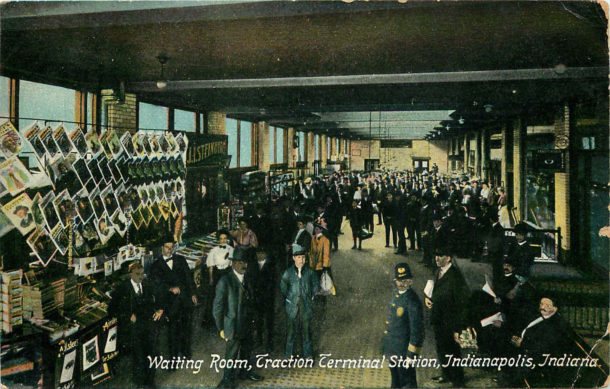 Lottie Kinsey’s lawsuit was about much more than cracked plaster. In a nutshell, her attorneys were arguing that the electric interurban companies operated just like an ordinary steam-driven railroad, and as such, should be required to acquire a right-of-way from landowners whose property was adjacent to city streets. The implications of this were far-reaching.

Although interurban systems were required to obtain rights-of-way in order to lay their tracks in the countryside, once their cars entered a city, they ran along the existing street railway tracks.  An adverse decision would hobble the growth of the interurban system, which was carrying nearly 5 million passengers each year to Indianapolis by the time the case reached the Indiana Supreme Court in 1907.

As the complicated litigation was winding its way through the lower  courts, however, Lottie Kinsey apparently decided that enough was enough.  In March 1905, she and her husband put their home up for auction and moved to Chicago. 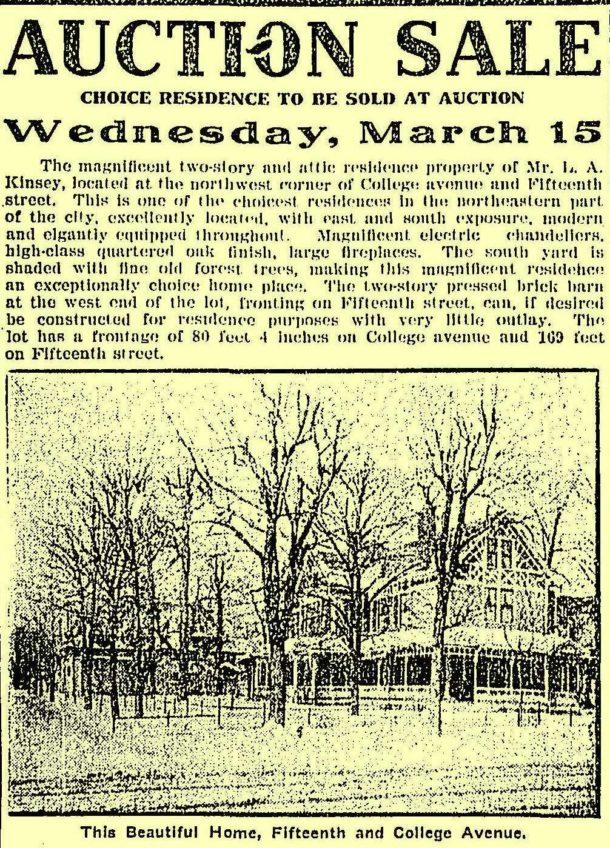 A crowd of approximately 200 people gathered on March 15 for the auction for the Kinsey house, which was described by the Star as “one of the finest homes on the avenue.” Charles F. Coffin, general counsel for the State Life Insurance Company, placed the winning bid at $14,500.

At the time of the auction in 1903, Louis Kinsey told the Star that he had paid $36,000 for the house just a few years earlier – the equivalent of nearly $1 million in today’s money. 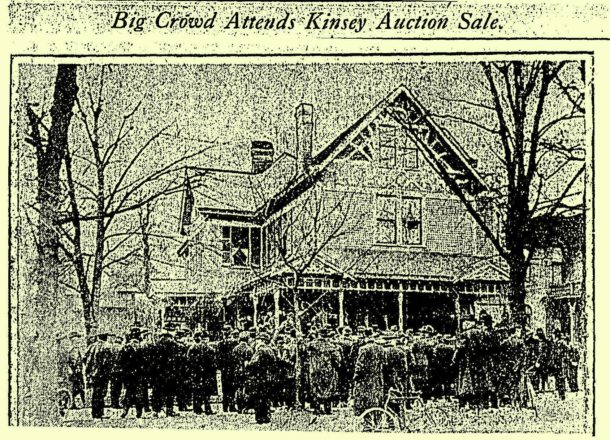 Even though Lottie Kinsey no longer owned her house on College Avenue, the Indiana Supreme Court determined in 1907 that she was eligible to be awarded damages for her loss.  But the Court’s ruling did not mean that her rights as a property owner trumped those of the interurban systems. In a sharply divided 3-2 decision, the Court ruled that interurban cars had a right to use the public streets.

In fact, as the majority opinion noted, the interurbans actually benefited the residents of Indianapolis by promoting commerce, increasing tourism, and relieving streets from the wear-and-tear caused by heavy truck traffic.

In the years following the court decision, College Avenue slid into a slow decline. But the rest of the area was changing as well.  Large family homes throughout the neighborhood were cut up into apartments or torn down to make way for businesses. By the 1970s, a significant number of once-stately homes in the neighborhood known today as the Old Northside had either been demolished or burned down by arsonists.

As it turned out, the moving force behind these changes was not the noisy interurbans that rumbled down College Avenue.  The real weapon of mass destruction of Indy’s old downtown neighborhoods was the automobile, which enabled families to escape the soot and grime of the city and move to spacious new homes in the suburbs.

The new owners of Lottie Kinsey’s house exemplified this trend.  After purchasing the home at auction, Charles Coffin and his family lived at 1504 College Avenue for nearly two decades. But then in 1924, they followed the trend north and moved to 3305 North Meridian. 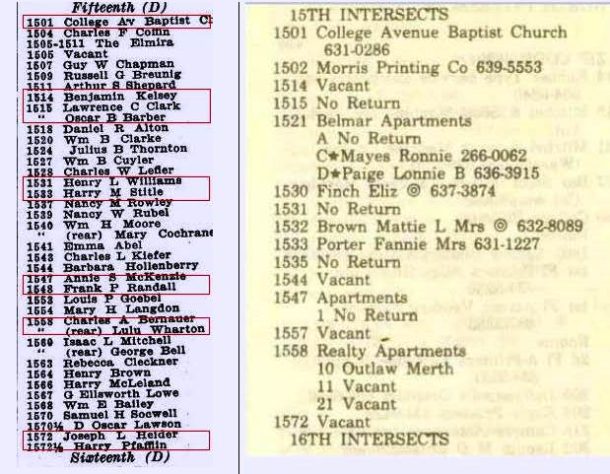 City directories show the changes to the 1500 block of College between 1914 (left) and 1984. The properties that were still standing after 70 years are circled in red.

In the end, mass transit was actually a boon to Indianapolis.  In fact, a January 1, 1912 article in The Indianapolis Star credited the growth of rapid transit as the single most important factor behind the city’s success.

[I]f it were not for the marked improvements…. in the city street railway service and the marvelous development of the interurban roads …. Indianapolis would not now be marching forward with Titanic strides…”

Of course, the Star had no way of knowing that within four months of boasting about the city’s “Titanic strides,” the Titanic itself would lie at the bottom of the ocean.

Nor could they have foreseen the eventual decline of mass transit in Indianapolis. 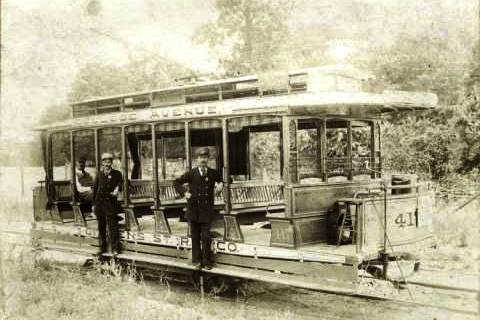 Two weeks from today, voters in Indianapolis will have the opportunity to cast a ballot in support of a mass transit initiative.  One of the improvements targeted for funding under the innovative plan is a new Red Line bus rapid transit system that will run down College Avenue.

Given our city’s history, it’s only fitting that the first BRT line is planned for College Avenue.  Because that’s where the last streetcar run ended.

At 3:10 a.m. on January 9, 1953, the last Indianapolis streetcar — aptly dubbed “A Streetcar Named Expire” — rolled down College Avenue and pulled into the terminal for the final time. So if the initiative passes on Election Day — and I hope it will — our city’s on-again, off-again love affair with mass transit will have finally come full circle.