Imagine for a moment that you’re living in a world where families are struggling to make ends meet. Where hard-working citizens are losing their jobs to technology and immigrants.  Where some of these immigrants are criminals, many are indigent, and most of them practice a different religion that calls into question their allegiance to our country. And then — almost overnight — a new political movement sweeps the nation that promises to make America great again.

Welcome to 1854 and the rise of infamous “Know Nothing” party. 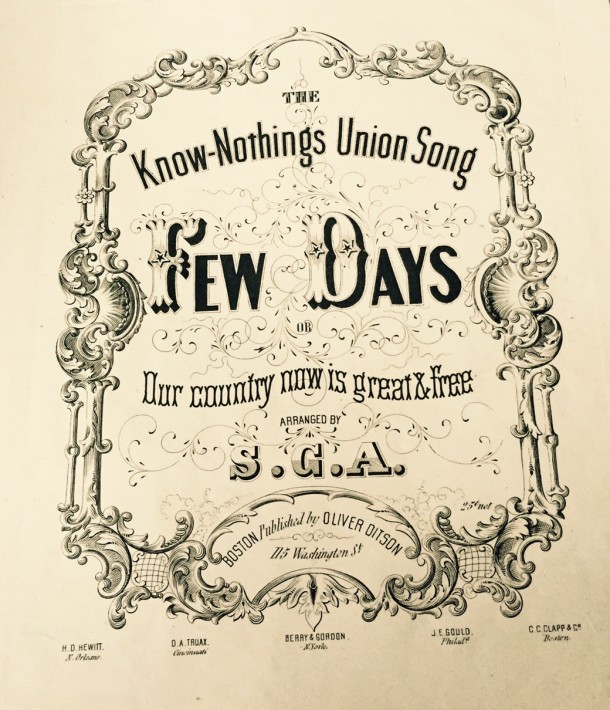 In the mid-1850s, a new political party known as the “Know Nothings” seemingly sprang up out of nowhere to challenge the entrenched bureaucracy and “Re-Americanize America.”  Among other things, its platform called for more stringent immigration laws, tougher naturalization requirements, and a variety of draconian measures aimed at limiting the growing influence of the Roman Catholic church.

Now — 160 years later and in the midst of a presidential campaign where the GOP candidate has pledged to build a wall on the U.S. border and ban immigrants based on their religion — the long-defunct Know Nothing party is back in the spotlight. 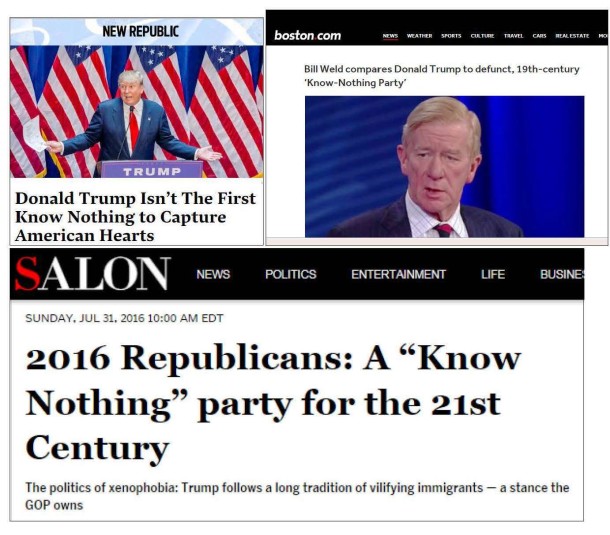 Before the recent spate of headlines appeared that compare Donald Trump to an 1850s Know Nothing, it’s safe to say that most Americans knew nothing about this obscure political party and its coattail cousins, the Say Nothings and Know Somethings. Lest you think I’m referring to characters in a Dr. Suess book, all three movements were the offspring of a nativist sentiment that had been simmering in the melting pot of America ever since European settlers took the land from the actual Native Americans and assumed the title themselves.

Although the United States is a nation founded by immigrants and grounded in the principle of religious freedom, strong opposition to immigration — especially from Roman Catholic countries — was festering almost before the ink was dry on the Constitution. This opposition was fueled by the fear that without some degree of homogeneity among its citizenry, the fledgling federation would fracture.   Catholic immigrants posed a special threat, politicians believed, because they would sooner pledge allegiance to the Pope than to the American flag.

By the 1830s, the number of Catholic immigrants settling in the large eastern cities had grown to the point that they were becoming a major factor in local politics. Several efforts to establish a nativist party faltered, however, because for most Americans, the threat of having their schools, churches and government upended by dictates from Rome was theoretical at best.

But then — as we say in the 21st century — things suddenly got real. 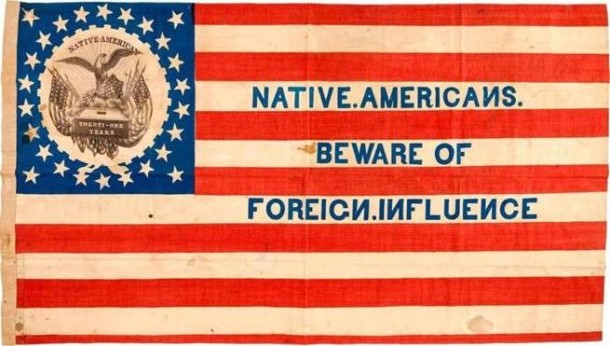 Between 1840 and 1850, 1.5 million immigrants flooded American shores – a ten-fold increase from the earlier decades of the century. Some had been loaded on a ship and deported because they were criminals or paupers, but the vast majority were either Germans seeking refuge from political unrest or — like my Kelley ancestors — Irish fleeing the potato famine. But regardless of the immigrants’ reason for coming to America, their welcome was beginning to wear thin as they competed with the so-called “native Americans” for jobs, housing and other scarce resources.

In the midst of this maelstrom, a secret society called the Sons of the Star Spangled Banner was founded in New York. Like other secret societies of the time, it had a secret handshake, mysterious code words and elaborate initiation rituals. But its purpose was not benevolent or fraternal; instead, the Sons of the Star Spangled Banner were banding together to secretly back candidates who embraced their nativist views.

The new organization struggled at first, but then picked up steam in 1853 when an incendiary priest named Father Alessandro Gavazzi traveled across the country, preaching about the evils of Rome and warning Americans of the Pope’s alleged plan to take over the U.S. system of secular schools. The movement spread rapidly across the nation, and its members became known as “Know Nothings” because they disavowed any knowledge of the organization’s purpose or even its existence.

Lyrics of The Know Nothing Polka

Indiana was not immune from Know Nothing fever.  Father Gavazzi spoke to packed audiences at the Masonic Hall in Indianapolis in October 1853, and the state’s first Know Nothing lodge opened shortly thereafter.  In May 1854, the Know Nothings claimed 30,000 Indiana members; by July, the membership in the Hoosier state was 60,000 and growing daily.

State party leadership decided it was time to flex their organizational muscle.  Although the Know Nothings were not yet strong enough to carry their own ticket,  the party devised a plan to infiltrate the People’s Party and secretly control its platform and selection of candidates. 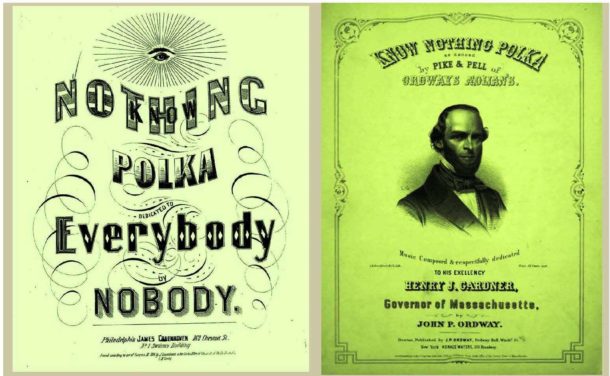 The direct forerunner to the modern-day Republican Party, the People’s Party was a fusion of disparate interests that were joined together in common opposition to the expansion of slavery.  Its state convention was scheduled for July 13 in Indianapolis, so the Know Nothings decided to hold their convention immediately beforehand. 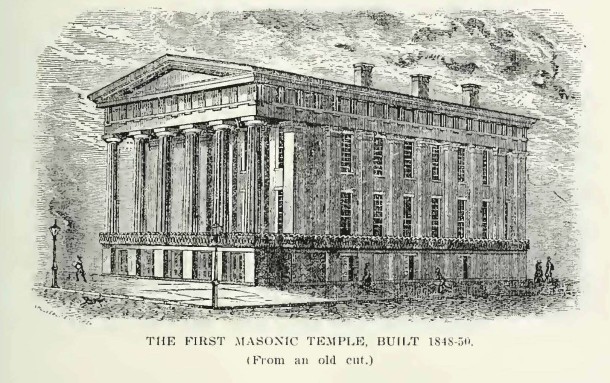 With control of the People’s Party firmly established, the Know Nothings converged on Masonic Hall in Indianapolis for their state convention.  The windows were covered and every attempt was made to shroud the two-day event in secrecy.  However, a young editor for The Indianapolis Sentinel was able to climb to the top of an adjacent outhouse and peer in.  He  identified several attendees before he was forcibly removed from his post, including Reuben A. Riley, father of James Whitcomb Riley, and Rev. Lucien W. Berry, president of Asbury (now DePauw) University. 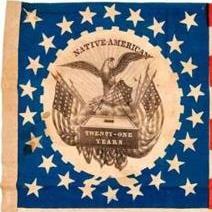 The months leading up to the election were heated.  The Know Nothings campaigned on a platform that — among other things — would have required an immigrant to live in the United States for 21  years before becoming eligible for citizenship and would have banned anyone from elective office who was not a native born Protestant.  Not surprisingly, Democrats accused the Know Nothings of bigotry. But by September 1854, the ranks of the Know Nothing Party had swelled to nearly 90,000 Hoosiers.

Around the same time, two alternative parties dubbed the “Say Nothings” and the “Know Somethings” were established in the Midwest to repudiate the Know Nothings’ nativist views.

Election Day 1854 was marked with violence and rioting. The Know Nothings in southern Indiana allegedly imported bullies from Kentucky to keep foreigners and Catholics from the polls, a move that drew the ire — and the fire — of rogue gangs of Irishmen. But the Know Nothings prevailed, and many of their secretly hand-picked candidates were swept into office. 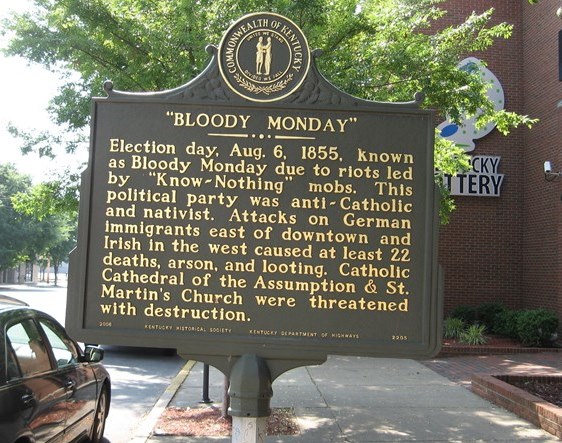 This marker can be found at 1011 West Main Street, Louisville, which happens to be the address of the Kentucky Lottery office

With some election successes behind it, the national Know Nothing Party emerged from the shadows and redubbed itself the American Party.  However, the northern and southern states were becomingly increasingly divided over slavery, and national party leaders realized that the only way that the American Party could become a national force was if the issue of slavery was taken off the table.

In June 1855, delegates to the American Party’s national convention adopted a platform urging Congress to refrain from addressing slavery issue.  The anti-slavery Indiana delegation seceded from the national organization.

The following month, William Sheets of Indianapolis was elected president of the Indiana Know Nothings.  Over the vigorous objections of delegates from Evansville and Terre Haute, the state Know Nothing convention adopted an anti-slavery platform that also embraced all naturalized citizens, except for Roman Catholics.

With the break from the national party and the focus on opposition to slavery, the differences between the Know Nothings and the Indiana Republican Party were beginning to fade. 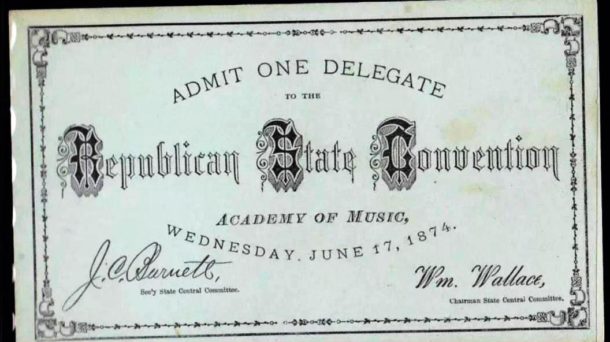 In 1855, William Wallace ran as the Know Nothing candidate for mayor of Indianapolis. He lost, but the following year ran as a Republican and won a special election after the incumbent mayor died. 20 years later, Wallace chaired the State Republican Party.

In 1856, Sheets and several other prominent Hoosier Know Nothing leaders officially joined the Republican Party.  Although the American Party (a.k.a. the Know Nothings) continued to strongly oppose any foreign influence with the affairs of government, nativism was taking a back seat to the anti-slavery movement.

In 1857, the dwindling membership of the Indiana Know Nothing Party held their final convention in Indianapolis, and — true to their name — accomplished nothing. 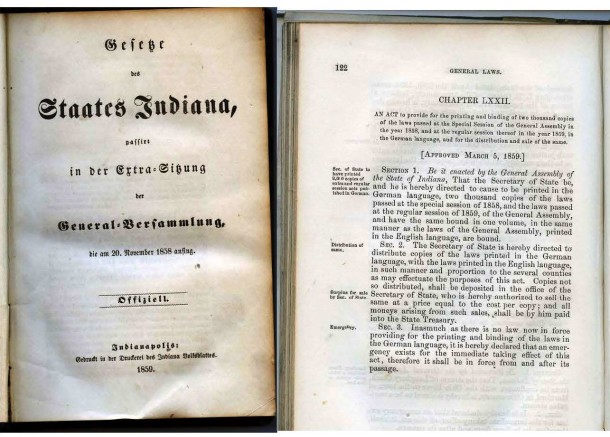 Just two years after the final Know Nothing convention adopted several nativist resolutions, the Indiana General Assembly passed a law requiring 2,000 copies of its enactments to be printed in German and distributed throughout the state.

Although Abraham Lincoln never spoke publicly in opposition to the Know Nothing movement, he made his opposition known in an 1855 letter to his friend Joshua Speed. The future president wrote:

I am not a Know-Nothing. That is certain. How could I be? How can any one who abhors the oppression of negroes, be in favor of degrading classes of white people? Our progress in degeneracy appears to me to be pretty rapid. As a nation, we began by declaring that “all men are created equal.” We now practically read it “all men are created equal, except negroes” When the Know-Nothings get control, it will read “all men are created equal, except negroes, and foreigners, and Catholics.” When it comes to this I should prefer emigrating to some country where they make no pretense of loving liberty — to Russia, for instance, where despotism can be taken pure, and without the base alloy of hypocrisy.

For more information, check out Carl Fremont Brand’s article, “The History of the Know Nothing Party in Indiana,” published in three parts in The Indiana Magazine of History in 1922. In the article, Brand notes that the Know Nothing’s “protest against immigrants who refuse to become Americanized” was “by no means a dead issue in this day of the ‘hyphenated’ American.”

Brand’s words proved to be prescient, because within three years, the anti-immigrant, anti-Catholic Ku Klux Klan would rise to power in Indiana and control the Indiana governor’s office, the state legislature and the city of Indianapolis.  To learn more about this dark period in Indiana history, see Indianapolis Collected: D.C. Stephenson’s revenge.