Meet Joanie Coxen Nichols, a dear woman, born in Indianapolis within months of the Stock Market Crash of ’29. Joanie has faithfully served her city and helped with the beginnings of some of Indy’s beloved treasures, including the Children’s Museum Haunted House and the St. Margaret’s Hospital Guild’s Decorators’ Show House. 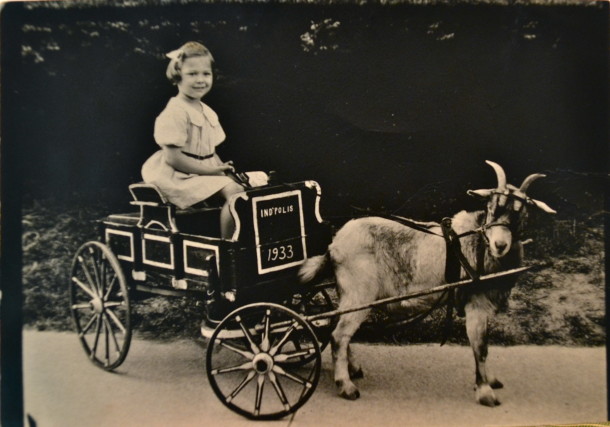 Little Joanie on a goat ride, 1933. Courtesy of Joanie Nichols.

Joanie’s family has been in Indy for (from what she knows) at least 140 years, beginning with her great-grandfather, Franklin L. Spahr, who bought a year-old house at 826 or 830 Broadway Street in 1874 and worked for a millinery company. 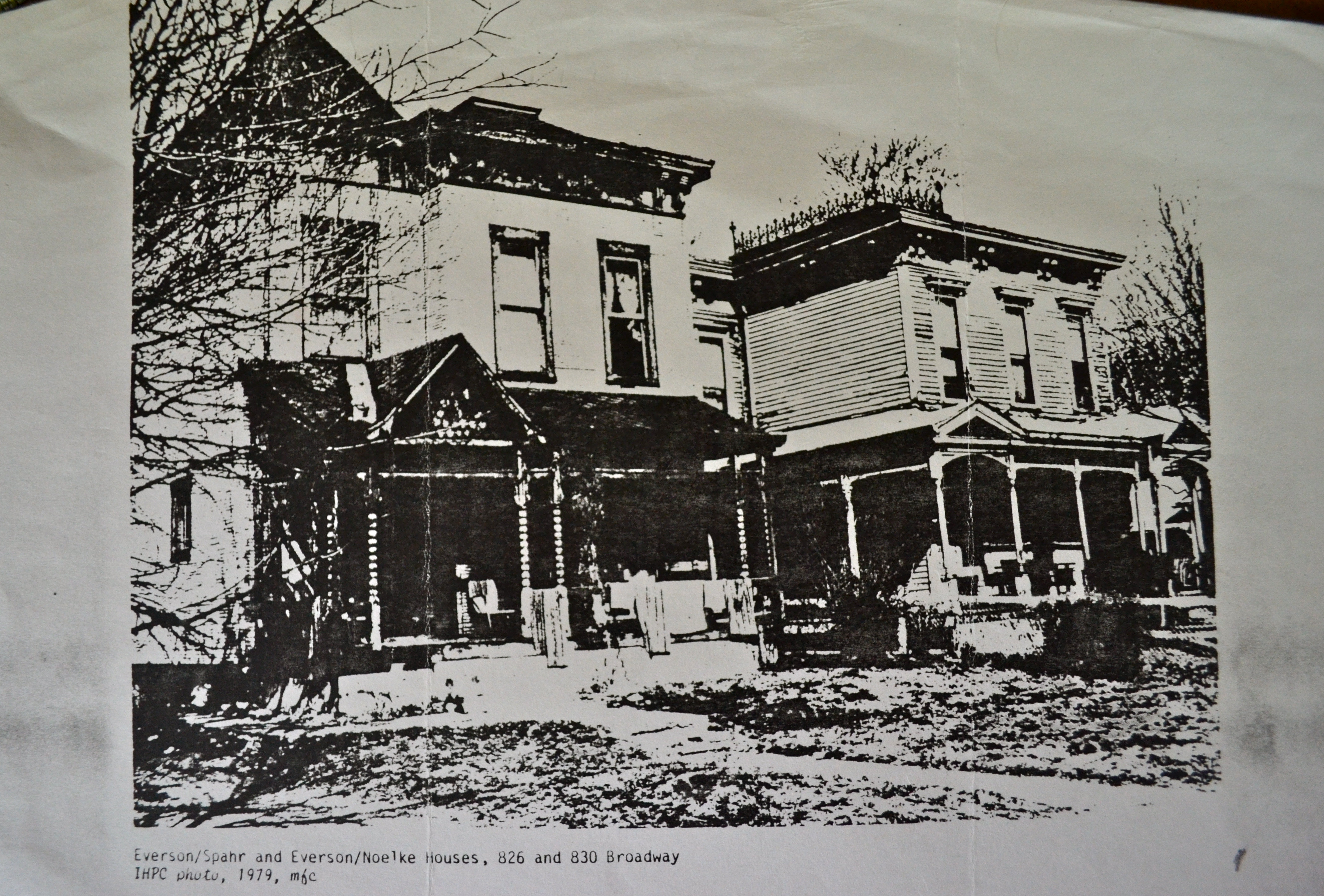 Joanie’s great-grandfather, Franklin Spahr, purchased either 826 or 830 Broadway in 1874. Courtesy of Joanie Nichols.

Franklin’s son, Charlie Spahr, grew up working on the accounting staff of Real Silk, a hosiery company located at 611 N. Park Avenue, while he raised his five children at 990 Woodruff Place Middle Drive. 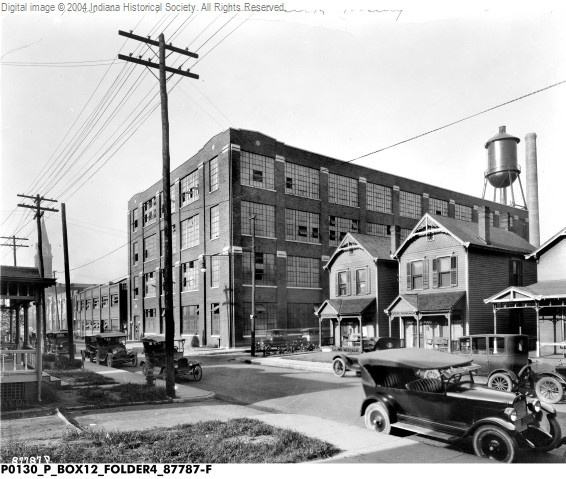 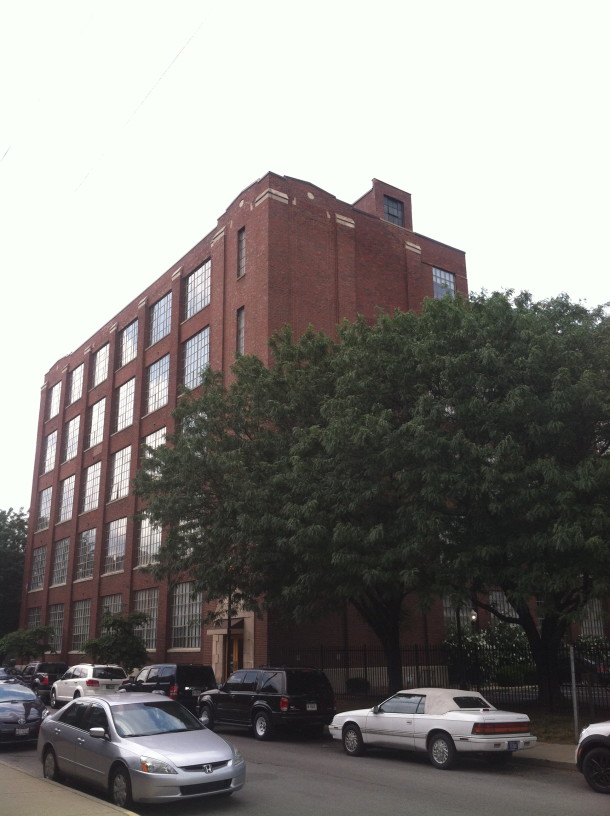 One of his daughters, Helen, met and married another Indianapolitan – Blanton Coxen – and gave birth to three daughters, the youngest being Joanie. Joanie was born at St. Vincent Hospital when it was located on Fall Creek Blvd. She still has the old hospital bill, which shows that her mother stayed in the hospital post-birth for 11 days – and all for a whopping $69. 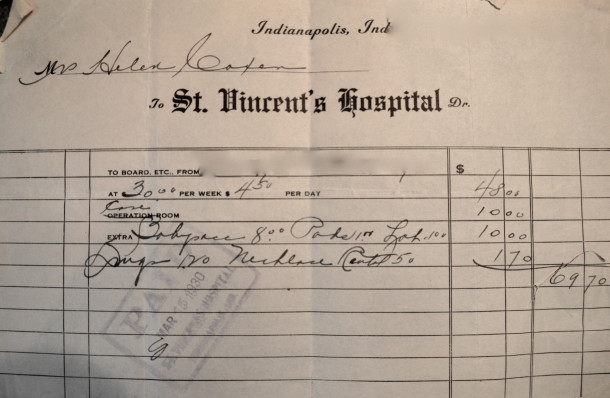 Joanie lived at 610 East 31st St. through the Depression, and she remembers beggars occasionally asking for food from her alley. Her family always ordered sweet rolls and bread from the Omar Man and milk from Robert’s Dairy, both who delivered directly to their door.

“My mother told me never to quit taking milk from Robert’s because they were so good to her during the Depression,” said Joanie. “And so I was a customer at Robert’s Dairy until the 70s.”

Joanie was a ‘midtermer’ at School #76 on 30th St. and College Ave. through 6th grade, which meant she started school in January instead of September. Joanie recalled walking to school with the help of the galiant traffic boys, who held the highest middle school honor during the War years. Joanie remembered a school festival called “America is a Melting Pot,” in which each room was a different country, so everyone dressed up in costumes, and she still has a photograph to prove it. There is also still a class reunion every year for her first grade class, which she has gone to from time to time. That school has been converted into the Stetson Senior Apartments. 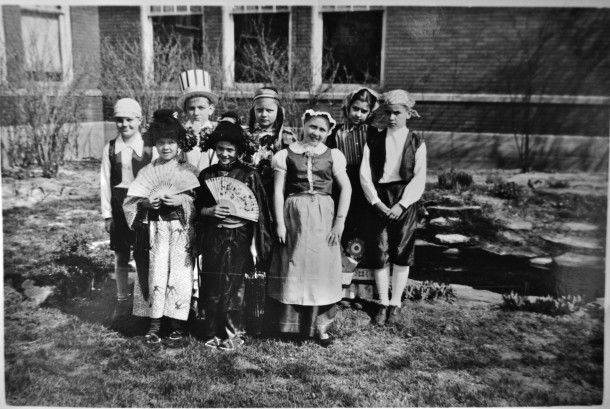 Joanie and her classmates at School 76, dressed up for the festival, “America is a Melting Pot.” (Courtesy of Joanie Nichols). 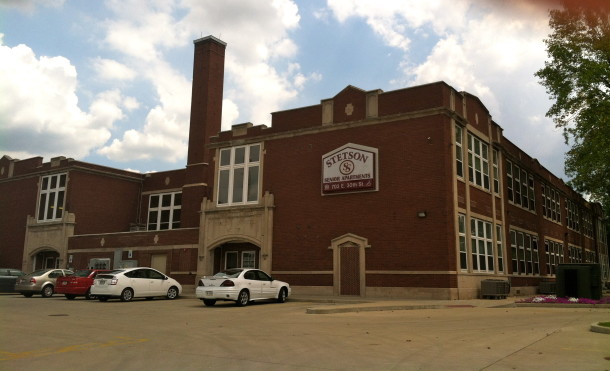 School 76 has been converted into Stetson Senior Complex at 30th and College Ave.

Many of Joanie’s relatives lived in Indianapolis, and she has many memories of visiting them all over the city.

“My aunt and uncle lived in the country on 86th St. They spent their honeymoon in a house that is now Habig’s Garden Center. And when we’d visit them, we’d say we were going out to the country, which is far from reality now.”

Joanie also loved  visiting her grandparents at their Woodruff Place house in the 1930s. Woodruff Place was Indianapolis’ first “suburban” neighborhood, with the oldest homes reaching back to the 1870s.

“When I was a little girl I went to visit them and used to climb all those statues and ride on the lions,” she laughed. “We’d go across the street to a drug store to get an ice cream cone, and my grandmother never let me lick the ice cream, I always had to eat it. So to this day I always finish my ice cream cones before anyone else because I eat the ice cream!”

“Sometimes we’d take a ride on the streetcars. They called them ‘cool off rides’ because no one had air conditioning. So we’d get on one streetcar and ride for a while, then hop on another one to get back home, just to get some fresh air,” she said. 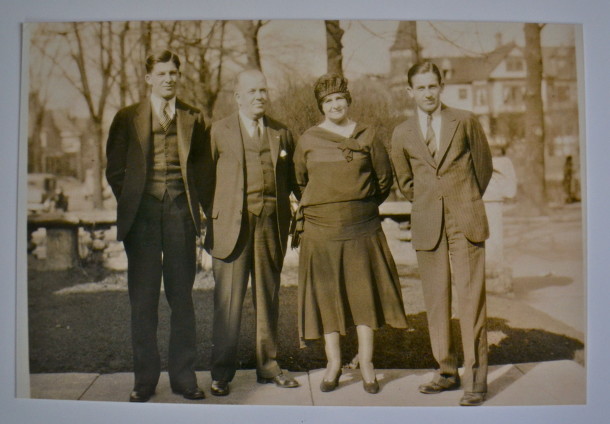 Joanie’s maternal grandparents, Charlie and Irene Spahr, with two of Joanie’s uncles in front of their home at 990 Woodruff Place Middle Drive. (Courtesy of Joanie Nichols). 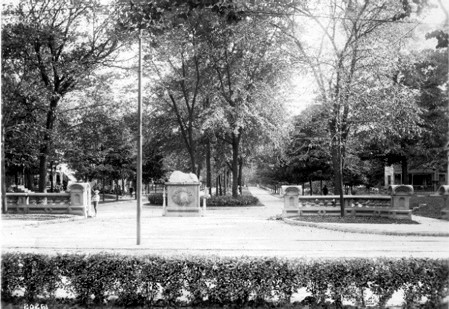 Joanie’s father, Blanton Coxen was a dentist along with his father in the Traction Terminal Building, previously on the corner of Market St. and Illinois. This beautiful building was torn down in April 1972. The site of the building is now Adams Mark Hotel. Joanie remembers visiting her ‘daddy’ at his office and shopping with her grandmother in the downtown department stores. 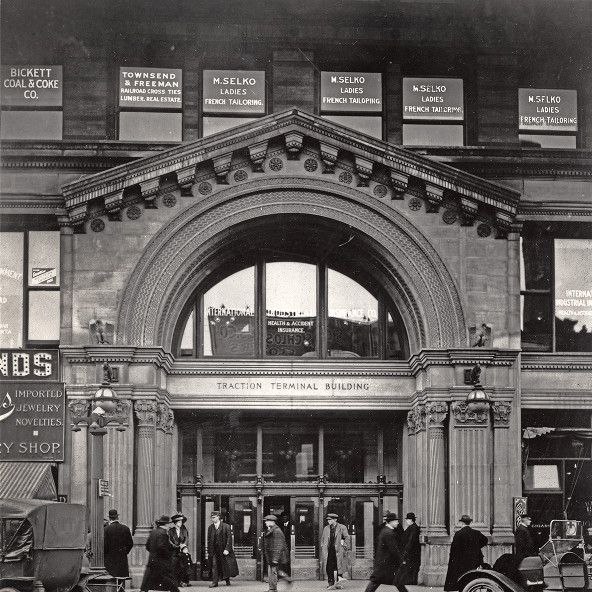 Having been a pre-teen during World War II, Joanie learned to ‘duck and cover’ during air raid drills and always had to cover her windows with blackout curtains at night. She was 11 when the attack on Pearl Harbor occurred, and still remembers that night.

“I can remember we were all in the living room, and my father had the radio on,” she said. “They announced that Pearl Harbor had been bombed, and all I remember is that my dad said, ‘Uh oh’ after they announced it.”

The War affected even the fashions of the era, which Joanie took part in then, but now finds ridiculous.

“We couldn’t get nylon hose during the War, so leg makeup became fashionable. You’d put this makeup on, which was kind of like tanning spray,” she explained, with laughter in her voice. “The stockings used to have seams up the back, so you’d take a pencil and draw a line up the back of your leg so it looked like you had a seam there!”

After 6th grade, Joanie’s family moved in with her grandparents at 3834 New Jersey St., which they built. The house was a grand four-bedroom home, with built-in bookcases, high paneled ceilings, a pinball machine– and one bathroom. Sometimes, the house had up to four Coxen generations living in it, and Joanie remembers having to line up in the hall to go to the bathroom, then hanging her hair over the registers to dry it.

Joanie transferred to School #66, between Broadway and Park on 38th, which has been renovated into Coburn Place, then went to Shortridge for high school. Joanie remembers her long summers spent at the Riviera Club and Indiana winters spent ice skating at the Pepsi Coliseum. She learned to drive in Crown Hill Cemetery, on 38th St. between Michigan Avenue and Boulevard Place.

Dancing was one of Joanie’s favorite activities, though she’d argue that she wasn’t very good. She was a part of Junior Vaudeville– an annual dancing and talent show consisting of five or six acts by various groups of students. She also loved going to Westlake, a beach and dance club just east of  I-465, between Rockville Rd. and 10th St. Its dance pavilion could open its roof, so people could dance under the stars. Westlake closed in 1973 to create room for apartments.

“And I think our Jr. Prom was at Indiana Roof Ballroom, and Tex Beneke was the band, which was a big deal at the time,” she said. 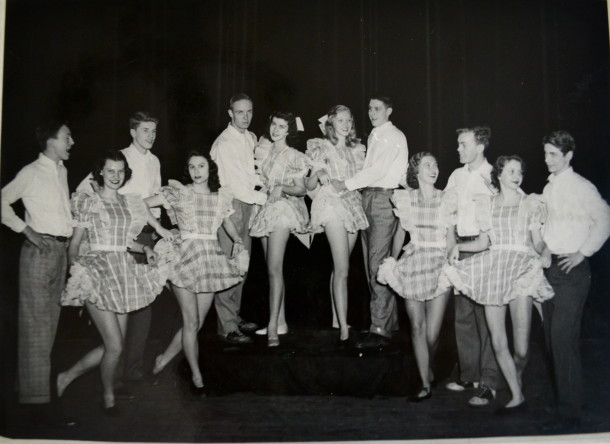 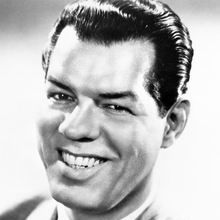 Joanie majored in Elementary Education and became a Theta at Butler University, when it was just Sweeney Chapel, Jordan Hall, and a few fraternity and sorority houses. Her senior year, she completed her student teaching at an old school in Fountain Square. After graduating, she taught there for a year and had 45 kids in her class — a feat she still doesn’t know how she accomplished.

“This school was so old that the only bathroom was the one in the teacher’s lounge. And there was a building out back by the playground with the toilets. So if they had to go to the bathroom they’d have to go outside.” 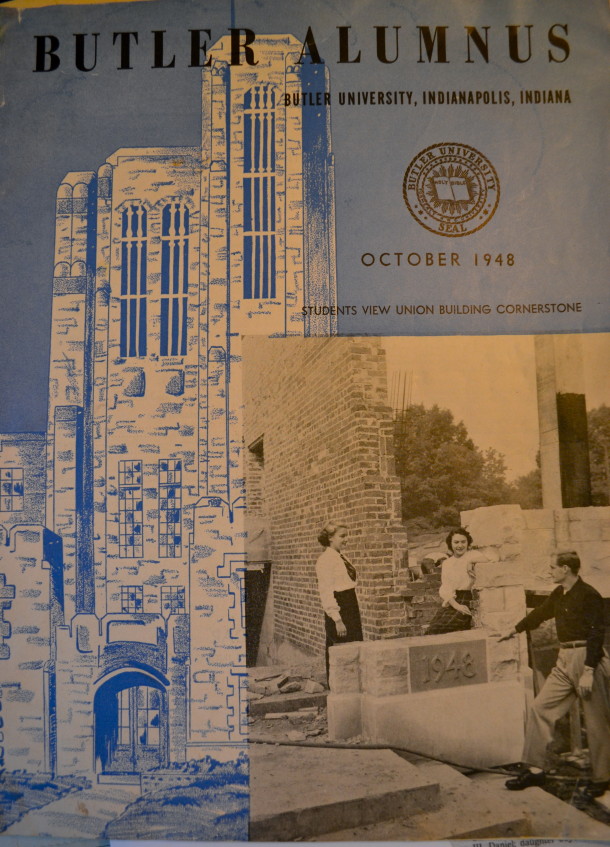 Joanie (sitting) on the cover of Butler Alumnus when Union Building is being built, 1948. (Courtesy of Joanie Nichols). 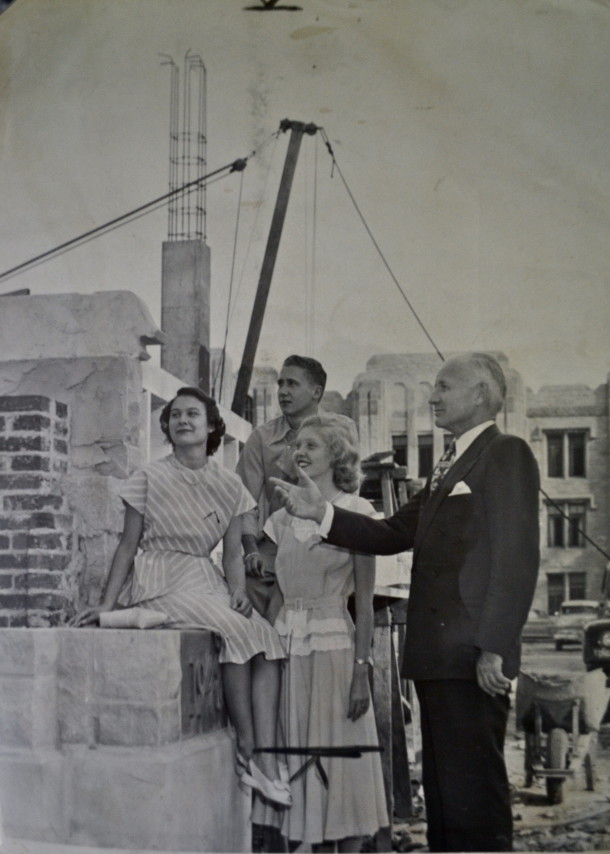 Joanie (sitting) with President M.O. Ross when the Union Building is being built, 1948. (Courtesy of Joanie Nichols).

Joanie moved back in with her parents to 3834 New Jersey with her 2 sons from a short-lived marriage. Several years later, Joanie met and married Thomas Laycock, an Indy architect and member of a long-standing Indianapolis family. He adopted Joanie’s two sons, and together they adopted a little girl. Thomas’ grandfather, T.B. Laycock, had a well-known bed manufacturing company in Indianapolis in the early 1900s (which you can more about here). 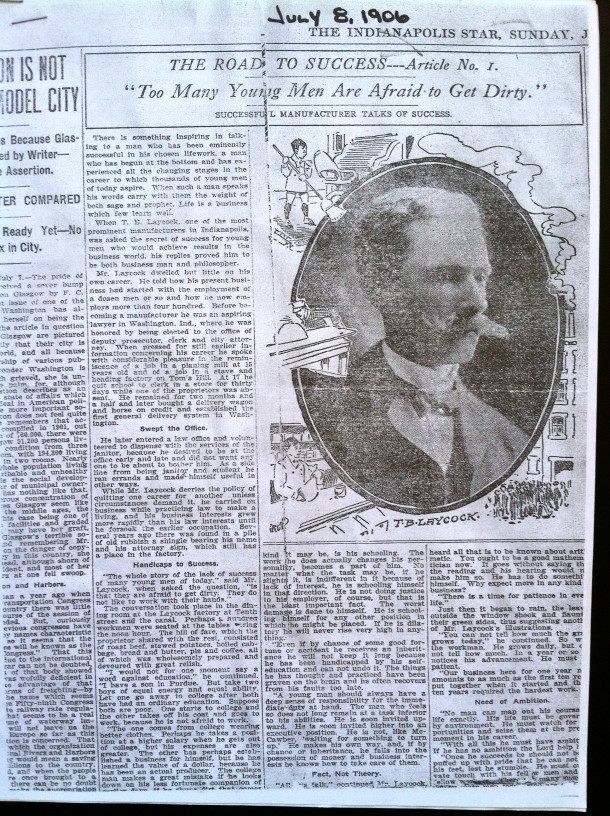 Joanie’s husband Tom was an architect and developer. He built and developed the Brockton apartments, southeast of Kessler Blvd. and Rural St., where they lived in the model home. He built the Sylvan Ridge Lakes subdivision on 71st and Dean Road, working on it until he passed away in 1982.

“He was a real visionary. He was kind of ahead of his time on everything,” she said of Tom. 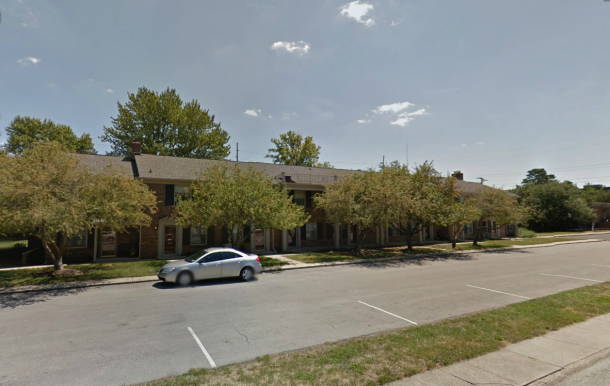 Several years after Tom’s death, Joanie remarried Scott Nichols, a metalurgist, and they ‘Brady Bunch-ed’ their families together to have a total of six children. He was active in the American Cancer Society and with IndyReads, an adult literacy program until he passed away last year.

Joanie has contributed to some of Indianapolis’ well-known organizations in large ways. She was Chairman of the Children’s Museum’s Haunted House in 1967 (its second year). She was also very active in the St. Margaret’s Guild in the 80s, helping with the ins and outs of the Decorator’s Show House. 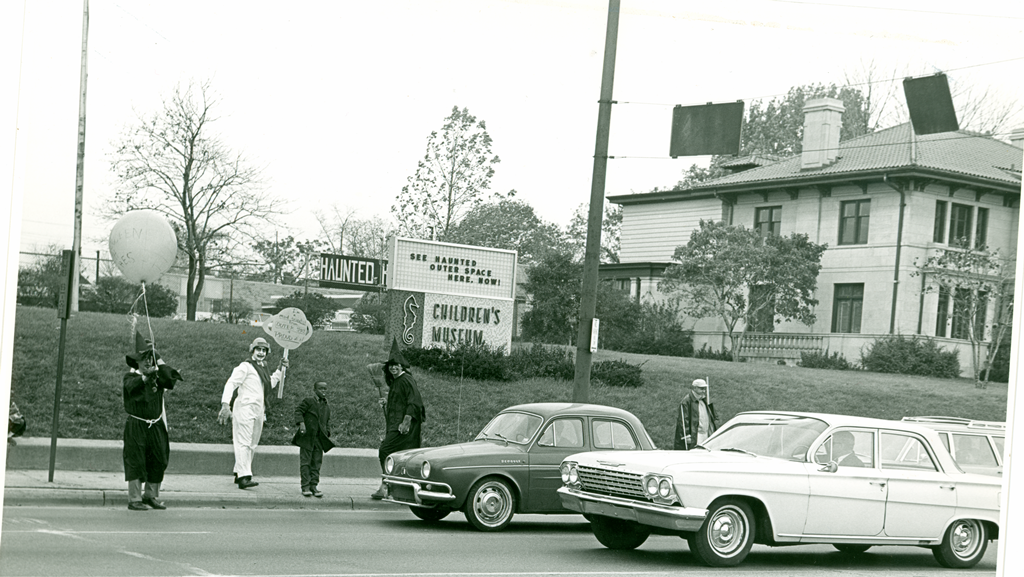 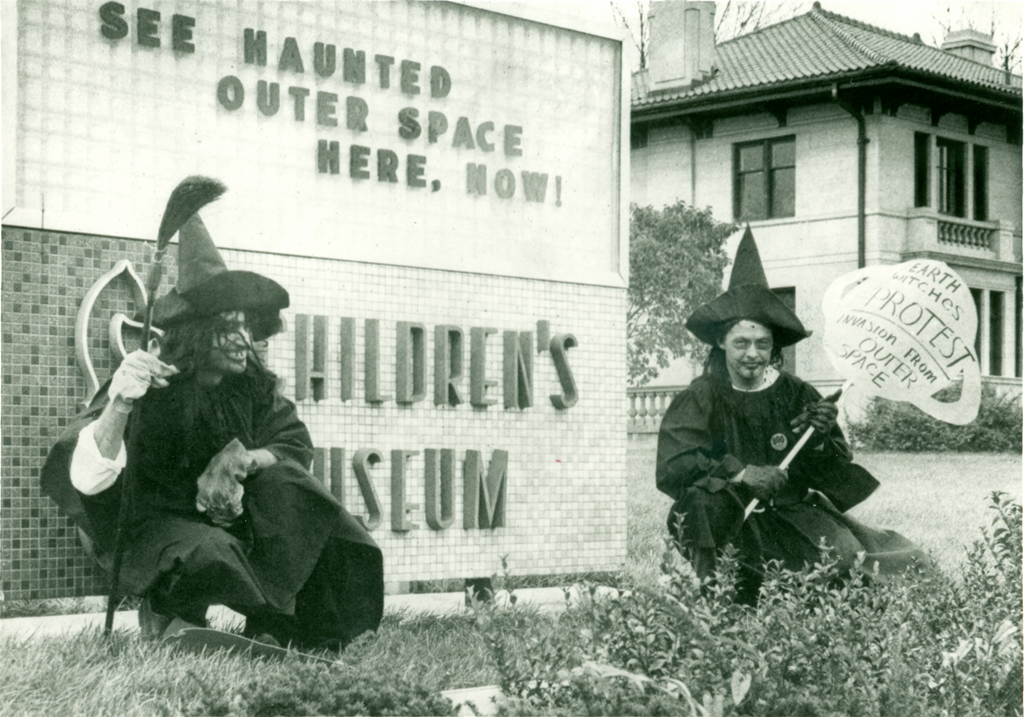 Joanie is still active in Northwood Christian Church on 46th and Central Ave, and keeps busy with her 15 grandchildren and 9 great grandchildren. Though Joanie doesn’t visit downtown often anymore, she is amazed by how it’s changed.

“They used to call it ‘India-NO-place’ because there was nothing to do downtown,” she said. “But it’s just amazing what they have done there with the housing and with IUPUI. I think it’s wonderful.”