Do you remember the Indiana highway construction of the 1960’s and 1970’s? Many apartment buildings, and even more homes, were demolished during the construction of I-65 – impacting all areas, but particularly Fountain Square and the Old Northside. Both areas were severed from downtown and their close neighbors, Fletcher Place and St. Joseph, respectively. Entire blocks were erased. In 1957, the state announced that it would plan freeways connecting downtown Indianapolis to the outer belt system (I-465) that was also being planned. In the early 1960’s, the state began purchasing homes, commercial buildings, and every other structure in the highway right-of-way and was met with much resistance – particularly in areas that would suffer economically. Prices offered for homes and other buildings were protested by owners; the Community Service Council of Indianapolis pushed for assistance for displaced families to assuage the situation (The Polis Center, IUPUI). The state built the I-65 interchanges between 1968-1971. Ultimately, particularly Fountain Square felt a dramatic decrease in population (17,000 residents in the downtown area total were displaced) as well as access to social services. Additionally, the west and northwest sides lost a significant portion of housing built between 1870-1910 (The Polis Center, IUPUI).

Map of I-65 layered on 1950 Sanborn map; Fletcher Place, Fountain Square; building in yellow is the Pinex 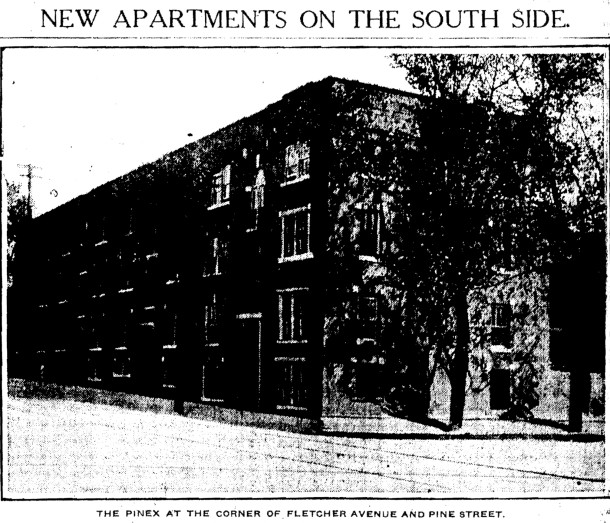 Two buildings lost in the gray zone between Fletcher Place and Fountain Square were the Pinex Apartments and the addition, referred to together as the Pinex Courts at 808 Fletcher Avenue. On “one of the city’s most beautiful avenues on the South Side,” the Pinex was built in 1917 at the corner of Fletcher Avenue and Pine Street (“New Apartments on the South Side,” IndyStar, 10/7/1917). Due to its close walking distance from the commercial district as well as its placement along the English Avenue car line, it was a desirable location. The Pinex was made of brick and stone, with eight apartments on each of the three floors. A description of the layout in the paper states that “each suite is a gem of the home-planner’s art…The separate apartments comprise an individual hall loading to every room excepting the kitchenette. West of this hall is the large, well-lighted living room. To the east is a spacious dining room, with a niche comprising a handy dressing room, into which a bed disappears when not in use… The bath, located off the hall, is complete with a spacious linen closet and medicine cabinet. Back of the dining room is the kitchenette, with an icebox…range, sink, garbage incinerator.” (IndyStar, 10/7/1917) The interior woodwork was comprised of a Flemish oak finish and natural tones. The following year, the apartments were listed for $27.50 a month to rent (IndyStar, 5/5/1918). 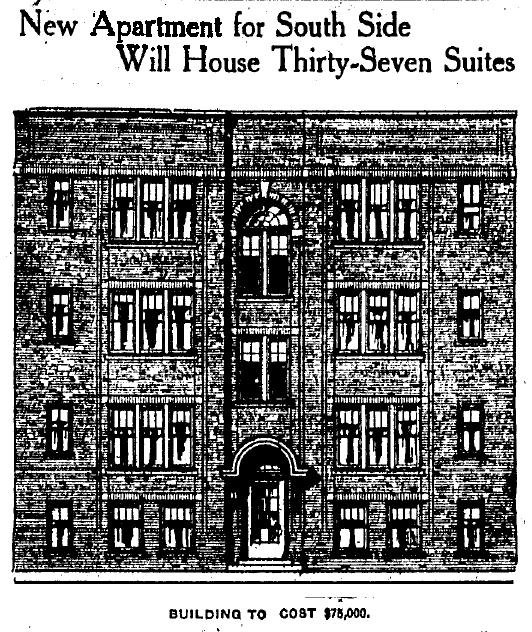 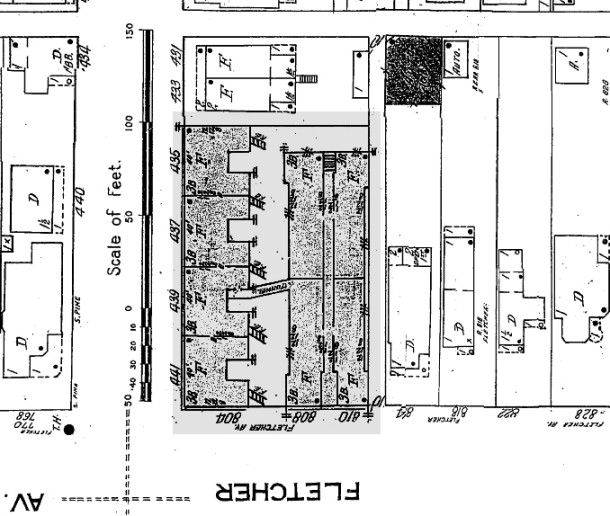 It was designed by C.L. Bacon for the owner, Fred M. Meiere. Meiere was a successful businessman in real estate, belonging to the Indianapolis Real Estate Board and the Indianapolis Rental Board as well as having his own company, the Meiere Realty Company. In 1912, he and his wife had been in a deadly car accident in Toledo, Ohio. His wife and the other driver died. At this time it is stated that he lived at 537 North Tacoma Avenue (“Body of Women Who Died in Auto Accident Arrives,” IndyStar, 9/17/1912). He continued to develop properties after he recovered from his injuries.

After this he moved to 2711 North Meridian Street, perhaps to be closer to new developments he was working on at 17th and Meridian Street and also 17th and Illinois Street, called the Seville Apartments (“Boards to be Guests,” IndyStar, 12/3/1921 & “Real Estate Board Will Lunch at New Seville,” IndyStar, 12/8/1921). He was coined the “pioneer in the construction of high-class small apartments for the South Side” in the article that discusses the second structure built to the Pinex Courts in 1919 (“New Apartment for South Side Will House Thirty-Seven Suites,” IndyStar, 4/19/1919). This second three-story structure was built just east of the original Pinex Apartments. The thirty-seven apartments cost the Meiere Realty Company about $75,000, with such features like In-a-Door beds, twelve and eight foot ceilings, built-in dining tables and seats, large windows, and office space for a doctor and a dentist somewhere on the first floor (IndyStar, 4/19/1919). This building was designed by the local architecture firm of George, McLucas & Fitton; construction of the brick and tile building was awarded to the Builders Construction Company of Indianapolis. The total number of suites between the two structures totaled at sixty-three. It was listed in the 1940’s and 1950’s as The Fletcher Apartments then reverted back to its former name by the 1960’s. It was torn down in 1970. 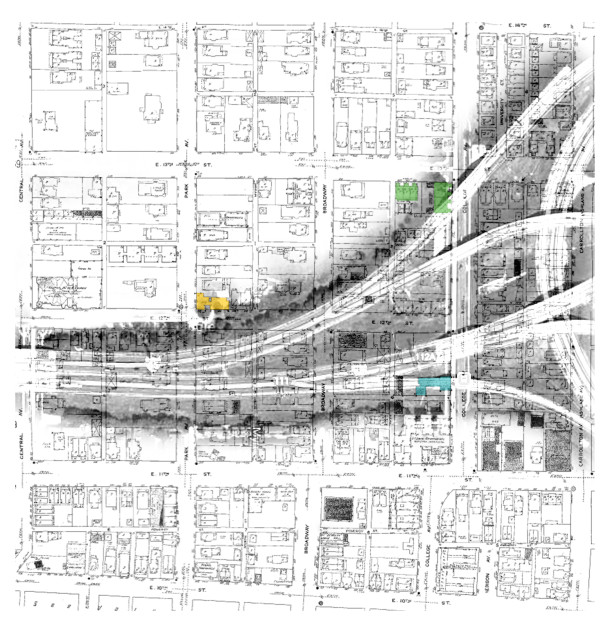 Map of I-65 layered on 1950 Sanborn map; Old Northside; building in yellow is Hazel Dell, green is Gausepohl, and blue is Walbrook 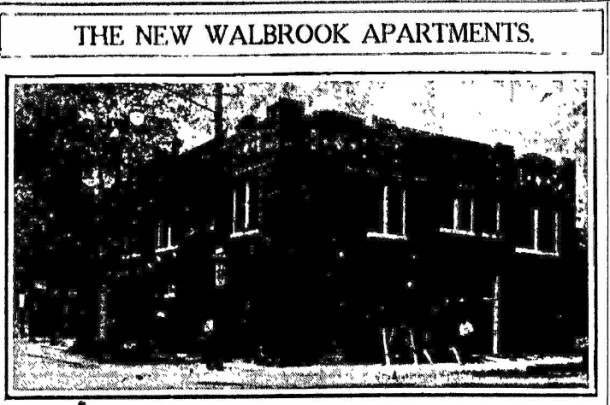 The Walbrook Flats were built in 1916 at 1104 College Avenue (sometimes listed as 1124-1126) and 670 East 11th Street. The “exceptionally well-built, attractive and thoroughly modern” flats were only two stories with six apartments on the second floor and four storerooms on the ground floor, making it a commercial/flat type (“The New Walbrook Apartments,” IndyStar, 5/28/1916). This unique area was semi-business and semi-residential, with the College Avenue car line stopping at the apartments and also 11th Street at the time was a boulevard with many flower gardens visible from the apartment. The land formerly was owned by Allen R. Benton, an early president of Butler (terms in 1861-1868, 1886-1891).  Designed by the Walker-Brooks Realty Company, developers who also worked on similar projects at 48th Street and College Avenue and also 42nd Street and College Avenue, the fireproof building is made of brick (IndyStar, 5/28/1916). The storefronts face College Avenue, and the apartments were accessible from an open court in the rear of the building as well as a front stairwell. The six apartments, with twelve foot ceilings, were described as “virtually duplicates, each having three rooms, including living room, dressing room, bath, solarium, and kitchen. All the available space has been cleverly utilized with closet and an oscillating portal bed in the living room, which doubles the sleeping capacity of each apartment, and serves as a very nice ornamentation for the room.” (IndyStar, 5/28/1916) Before the building was even completed, three of the four storefronts were rented – a drug store, a grocery store, and a tailor/dry cleaners would move in to the building. The building was unique beyond its commercial/flat design, which was rare in the Old Northside, but also due to its irregular shape and extremely large old forest trees that paralleled the building on the south side. In 1919, an apartment here went for $35 a month (IndyStar, 12/28/1919). 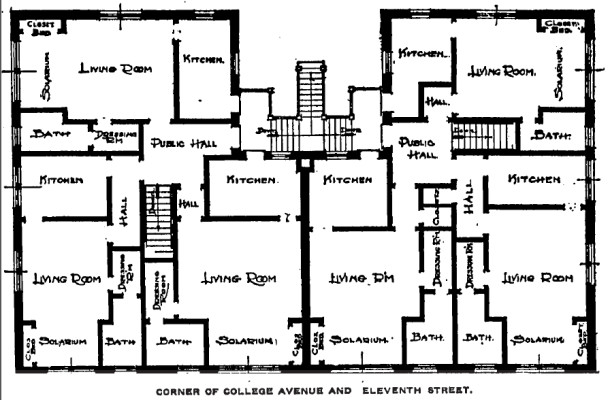 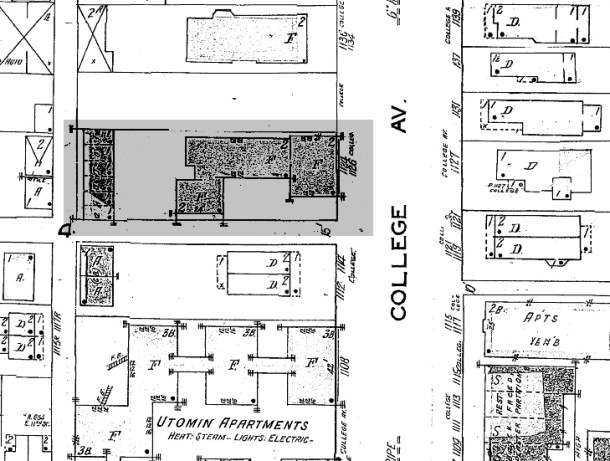 Another Old Northside apartment building lost was the Gausepohl Flats at 1236-1242 North College Avenue, along with the Gausepohl Annex at 655-651 East 13th Street. Built in 1916, the three-story plus basement apartment annex was comprised of twelve units of one to four rooms each to compliment the first structure built two years before which faced College Avenue. Designed by Charles H. Byfield (architect of the Heier and the Woessner) and built by O.O. Oberlies, the building was made of Western brick in reds and browns, white stone trim, and topped with a red tile roof  (“New Flat Building on North Side,” IndyStar, 8/13/1916). The interiors were done with oak parquetry floors and a light green paint; but no two apartments were designed identical, according to the interior decorators, W.L. Amthor Company. The apartments were outfitted with murphy In-a-Door beds. A large back entrance with iron stairs overlooked a private lawn in the backyard (IndyStar, 8/13/1916). Like many other flats, the Vonnegut Hardware Company supplied the In-a-Door beds, but also contributed the “A B” gas ranges, hot plates, Indiana refrigerators, laundry stoves, and all bathroom fixtures as well for these apartments. Both buildings only had eight foot tall ceilings, and multiple ads suggested no children. Named after E.J. Gausepohl, a businessman with a successful leather goods shop downtown on 27 West, then 40 West, then 38 West Washington Street as well as 30 North Pennsylvania Street who also was a shriner. He was the second Vice President of the Indianapolis Commercial Club in 1911 – first Vice President being H.M. Glossbrenner (“Newly Elected Officers and Directors of the Indianapolis Commercial Club,” IndyStar, 2/15/1911). He was also elected treasurer of the Chamber of Commerce multiple times in the 1910’s (IndyStar, 2/28/1915). The building was demolished in 1968. 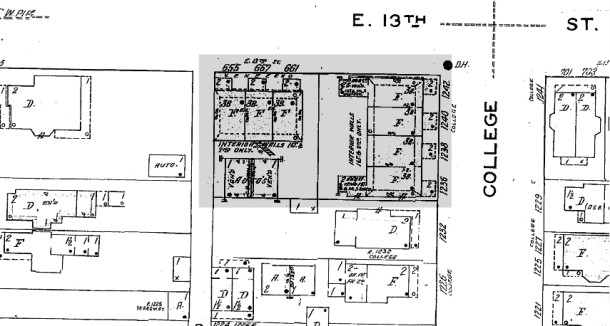 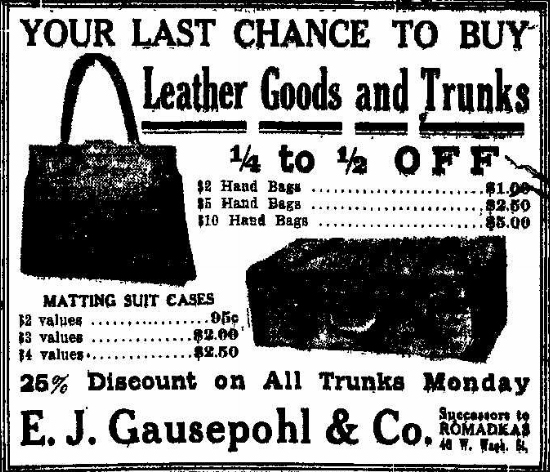 A humble building on the northeast corner of Park Avenue and 12th Street, the Hazel Dell Apartments, were constructed in 1917 at 1201-1203 Park Avenue and 604 East 12th Street. Now a parking lot for the Morris-Butler House Museum, this apartment building was right on the boundary between the interstate construction right-of-way and unaffected areas. The pressed brick structure was comprised of three-stories with eighteen apartments, nine in either wing. The irregularly shaped structure had twelve foot ceilings and only eight feet in some places. It was described as having “a large reception room, living room with a large closet and an In-a-Door bed, an individual hall, bath and a large and complete kitchen. The rooms are dainty and homelike… there are hardwood floors, tile entrances, and the interior decorating, even to the electrical illuminating fixtures, were selected with good taste.” (“New Apartment House,” IndyStar, 11/25/1917) The area was a desirable location, with it being on both the College Avenue car line and the Central Avenue car line. It was built by B.M. Pace. It was mostly likely demolished to make room for building materials and construction space, as it was demolished in 1970. 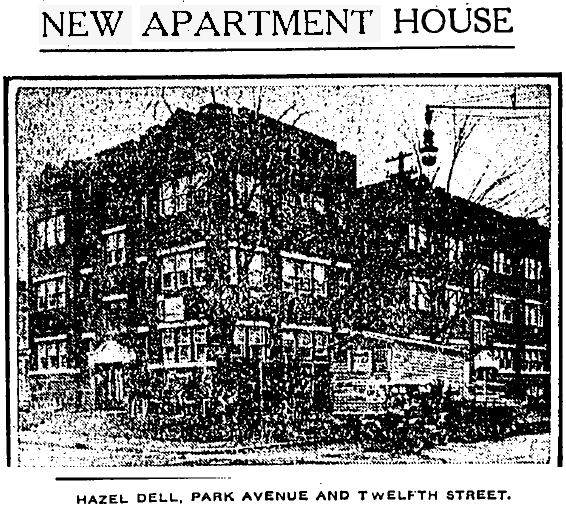 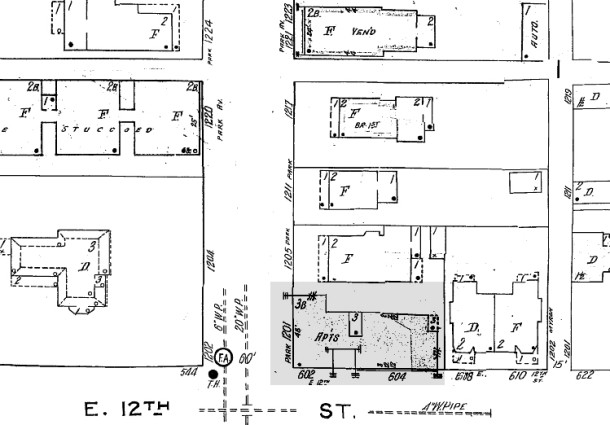