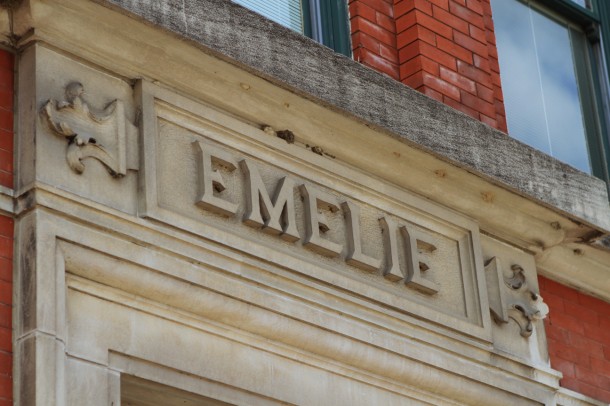 Before the Canal District we know of today, the one filled with contemporary art, public spaces, statues, and monuments, the canal functioned primarily for businesses – water supply, waste removal – along downtown’s west side. The original lower central canal, begun in 1835, took up parts of Missouri Street, in an area inhabited generally by commercial businesses and warehouses. Along the canal in 1902, two apartment flats were constructed, the Emelie and the Eugenia.

The area right off of the canal contained mostly homes in the 1910’s; with the popularity of the automobile, large chunks of real estate morphed into parking lots, auto shops, and garages. Specific places of interest nearby: the Volunteers of America Hall at 305 East Senate, the Holsom Bakery at 316-326 West Vermont, and the Swan-Myers Chemical Company at 219 East Senate in 1914. One significant structure on the block facing the canal was the Indianapolis Warehouse Co. According to Indiana Landmark’s “The Lower Central Canal: A Preservation Program,” the IWC was completed in 1905 to house the Indianapolis Chair & Furniture Company; around 1930 it was sold to the IWC. By the 1950’s more homes were gone, making room for the U.S. Post Office Garage next to the Eugenia. 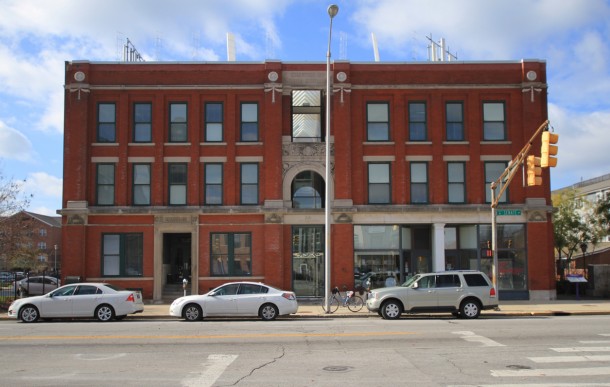 Built in 1902 at 334 North Senate Avenue, the Emelie still stands today as one of the most significant mixed-use structures with commercial space and apartments on the first floor and apartments on the above two floors. Erected by Fred Schmid, who was also the original owner, named the building after his wife, Emelie – the German spelling of Amelia. Schmid was born in Württemberg, Germany; he immigrated to the U.S. in 1852 and married Emelie Pfaefflin in 1853. According to Indiana Landmark’s National Register of Historic Places account, in 1872, he was the secretary of the Indianapolis Manufacturer’s & Carpenter’s Union, and he was a central figure in the operation of the German-English Independent School. The building permit from 1902 states that the building cost only $25,000. Schmid was buried next to his wife at Crown Hill Cemetery in 1905. 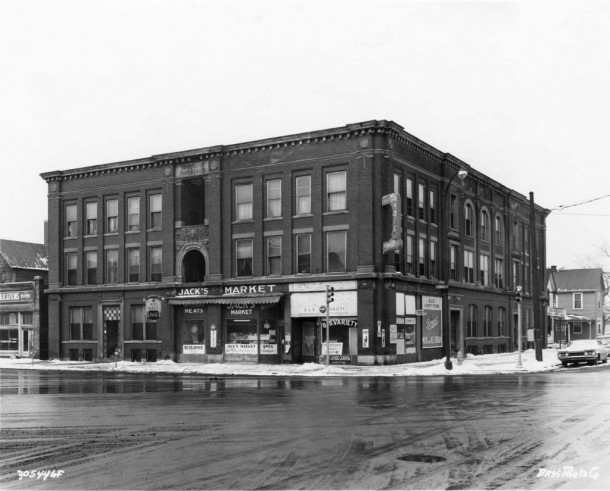 The three-story red brick and gray limestone structure was apartments and even a hotel at one time, with retail or commercial businesses on the first floor. Originally there were six apartments on the second story and six more on the third, with two commercial spaces and four apartments on the street level. The building has elements of Neo-classical style and of Beaux-Arts style. There is a great deal of exterior detailing, such as floral cartouches, roundels, and strip pilasters. Schmid chose the Brandt Brothers & Co for the construction; brothers, Louis and Henry, were German immigrants involved primarily in residential work. They also constructed the Lilly Mansion, Frederick Ayres home, and the Herron School of Art on 16th Street. The Emelie was abandoned in the 1970s and coined a flophouse.

The Eugenia was built on the other end of the 300 Senate Avenue block at 302 West New York Street in the same year, 1902. It had simple arched entry ways with scroll-shaped brackets on the top. This three-story brick building had the “eastern style” apartment plan – three-story two flat/per floor layout – with three in a row. The building had a total of eighteen units. The ceilings were eight ft high. The middle section had a slight inset to the façade, and the building had a strong horizontal emphasis with the molding above the first floor. There were also small carvings above a few second story windows, and roundel vents above windows in the middle. In 1913 a four room flat went for $26 a month; a six room flat was $32. 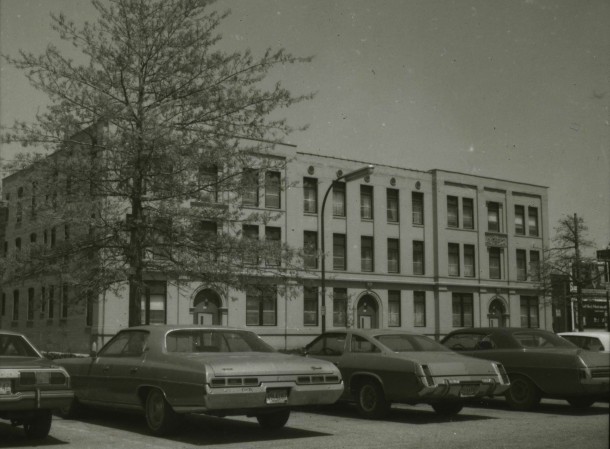 The Eugenia had a long, drawn-out demise. In 1981, it was listed in the Pan-Am Housing Complex area for the “Proposed Hotel Development Walker Complex.” Throughout the mid 1980’s, multiple proposals were submitted on redeveloping the area. In 1995, the popularity of the newly refinished downtown canal lead to a great deal of development along the canal – an Indianapolis Star article, “Canal Sites Draw Plethora of Bids” explains that developer Ken Puller intended to put in hotels, luxury apartments, and a parking garage on the south side of the block. However this only led to two hotels, the Marriot Courtyard and the Residence Inn, and a parking lot. Ken Puller also owned the Indianapolis Warehouse Co building, which he demolished in 1986 because he believed the building would interfere with the construction of the new New York Street bridge over the canal.

Interestingly, both buildings were mentioned in the National Register of Historic Places Inventory – Nomination Form, specifically the “Apartments and Flats of Downtown Indianapolis.” Completed in 1983, the NRHP Nomination was for thirty-seven apartments all within the 46204 or 46202 zip codes. The nomination describes the Emelie as a representation of the apartment versus the flat, based on the definition that an apartment type has a plan of smaller rooms and no kitchen. The Emelie was considered worthy of being a NRHP nominee in this condition: 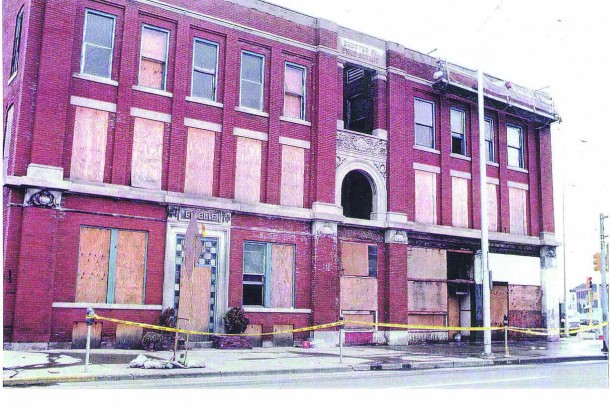 According to the NRHP inventory, the eligibility logic was based on “whether a specific property still retained a high percentage of its original historic physical materials (brick, limestone, leaded glass, etc), and its architectural design features (cornices, moldings, doorways, etc).” Even in the horrible state the Emelie was in at a time, its architectural merits were appreciated. However, the Eugenia did not receive the same fate. It is one of eight flats (including the Coburn, Avondale, Deauville, and the Celeste) given reasons why they were excluded from the NRHP nomination, which lead to no protections and thus demolished, many times. The reasoning for the Eugenia’s exclusion was that it had “lost many of the original exterior and interior features that determined [its] style and quality.” The Eugenia was torn down by developer Ken Puller sometime after the acceptance of the NRHP. The Marriot Courtyard was constructed between 1996 & 1997 in it’s place.

The Emelie was restored by Browning Day Mullins Dierdorf Architects firm in 1987; it included a 16,000 square foot addition, bringing the total square footage of the building to 35,000. The upper two stories are still in tact but the first story had been altered a few times in the past. The article “Restored Flophouse to House Architects” from 1987 explains further that the abandoned Emelie building was acquired by the firm in a swap with the city for the firm’s former office located at 124 South Meridian Street. The city wanted the structure demolished to make more parking available for the Circle City Mall. The firm used the Emelie as their home base from 1987 to 2003. It cost $2 million to renovate and expand the building, which the Stenz Construction Co. completed. The Emelie then served as home to the Indianapolis Museum of Contemporary Art and has been home to the Vonnegut Library since 2010. 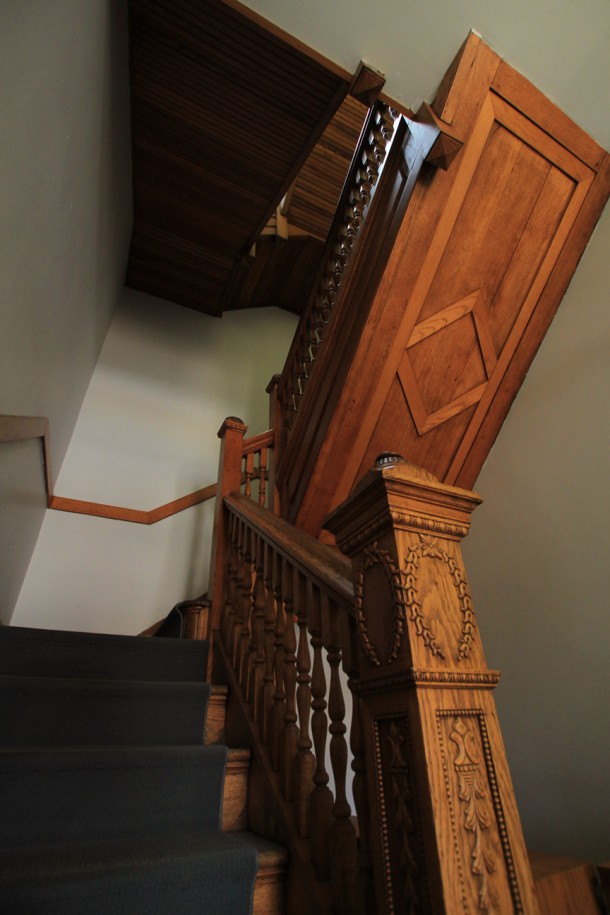 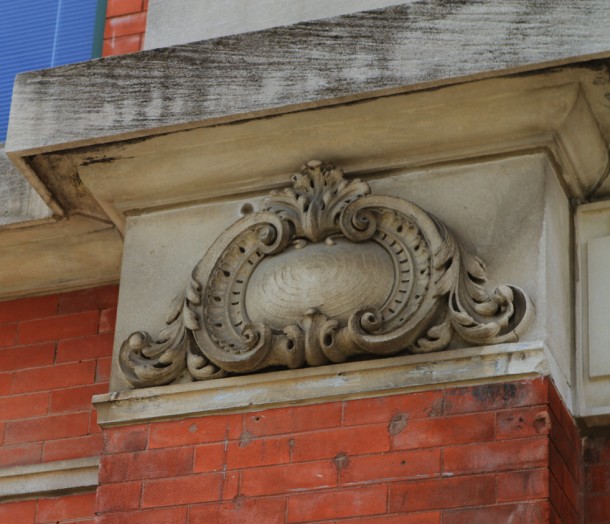