A newly discovered Frances Farmer in 1935

The internet. In 1994, almost none of us had heard of it, even fewer of us had reason to use it. Twenty years later, it’s how we communicate, shop, and learn. For many of us, the internet’s greatest potential is an insanely grand tool for procrastination. Whether it be keeping up to date on celebrity gossip, scrutinizing fantasy football stats or seeking out one piece of information that links to another and another and another until you’ve realized that you’ve intended to look up a pumpkin pie recipe for a family get together and instead learned all there is to know about different varieties of squash (or Cucurbita: latin for gourd.)

Recently, one such venture through the nooks and crannies of the interweb inadvertently activated a time machine. Randomly coming across a grainy video of the band Nirvana performing a song I hadn’t heard in years titled “Frances Farmer Will Have Her Revenge on Seattle”, I found myself in 1994, driving my parents Cutlass Ciera (likely too fast) playing that song (likely too loud) on the way to work. I also realized that I had never looked into who Frances Farmer was, but then, I also didn’t have the aforementioned internet. Next thing I knew, I was hit with the realizations that one hour had mysteriously disappeared and that, in all likelihood, I had been driving right by Frances the whole time and not known it. 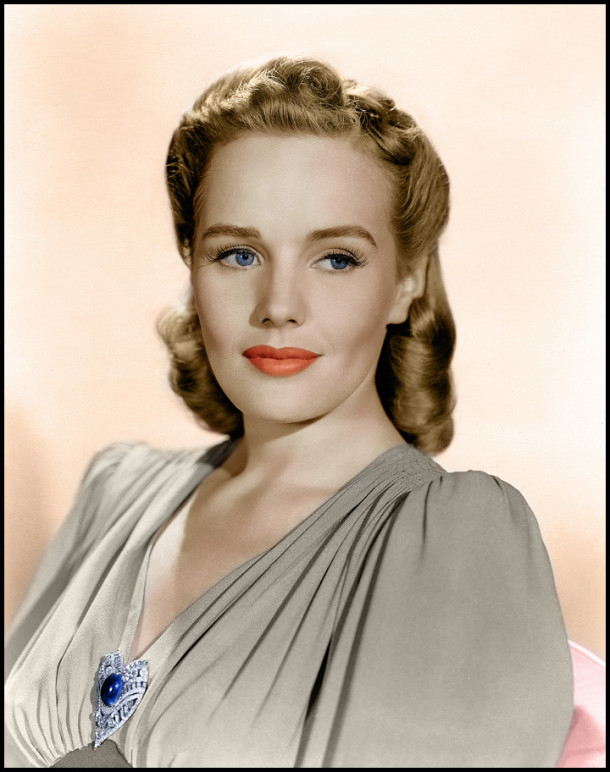 Frances Elena Farmer was born on September 19th, 1913 in Seattle, Washington to lawyer father Ernest and mother Cora. While in high school in 1931, Farmer won a cash prize from The Scholastic Art and Writing Awards for an essay she wrote titled “God Dies” inspired by Nietzsche. As she said later in her autobiography Will There Really Be a Morning?, “I was not to assume that there was no God, but I could find no evidence in my life that He existed or that He had ever shown any particular interest in me.”

Working various jobs, she paid her way into the University of Washington to study drama. In 1935 she won a contest sponsored by a Seattle based radical labor newspaper, the Voice of Action, which awarded Farmer a trip to the Soviet Union. Despite the objections of her parents, she took the trip, primarily so that she could attend the Moscow Art Theater, founded in part by famed Russian acting coach Constantin Stanislavski. She stopped in New York City on her return trip from the Soviet Union that summer with the intention of starting a theater career. Instead, she was set up for a screen test for Paramount Pictures who offered her a 7-year contract that she signed on her 22nd birthday. 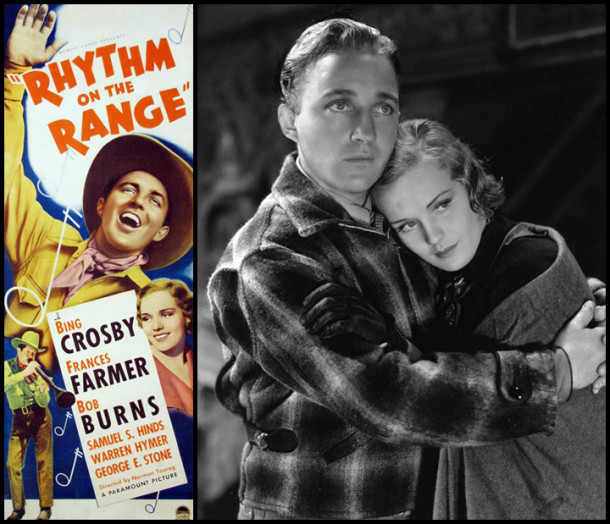 Bing Crosby and Frances Farmer in Rhythm on the Range (1936)

The whirlwind began for Farmer immediately, moving to Hollywood and immediately starring in two B-movies and marrying actor Leif Erickson in February of 1936. Later that year, she starred in her first two features, Rhythm on the Range with Bing Crosby and Come and Get It directed by Howard Hawks. Though her star shone bright right off the bat, she was dissatisfied with how the studio system managed every detail of their actresses lives and for being cast more for her looks than for her talent. As a result, she quickly gained a reputation for being uncooperative.

Farmer left Hollywood a year after she arrived, heading to New York to do summer stock, where she was well received and a few shows on Broadway, where she was less well received. She worked out a deal with Paramount to split her time between stage and screen, but found that she had been relegated to unchallenging costarring rolls. In 1940, she was loaned out to other studios to star in Flowing Gold and South of Pago Pago, but returned to Paramount with costarring status. Loaned out once again, she received acclaim for her roll in the 20th Century-Fox film Son of Fury in 1942, but in spite of this, Paramount cancelled her contract, citing erratic behavior and alcoholism, the later of which she denied in an awkward 1958 appearance on This is Your Life.

It was in 1942 that things began to go terribly wrong for Farmer. It wasn’t just the loss of her contract at Paramount or her increasingly negative reputation within the industry or the ending of her marriage to Leif Erickson. That October she was stopped by police in Santa Monica for driving with her headlights on in a wartime blackout zone and arrested on suspicion of being drunk. She paid half her fine, was released, but failed to pay the other half and was arrested again in 1943; around the same time she was accused of dislocating the jaw of a studio hairdresser. She was erratic at the hearing as well, where the photo below was taken, sentenced to 180 days in jail, but was instead committed to the psychiatric ward of L.A. General Hospital and was diagnosed with paranoid schizophrenia. 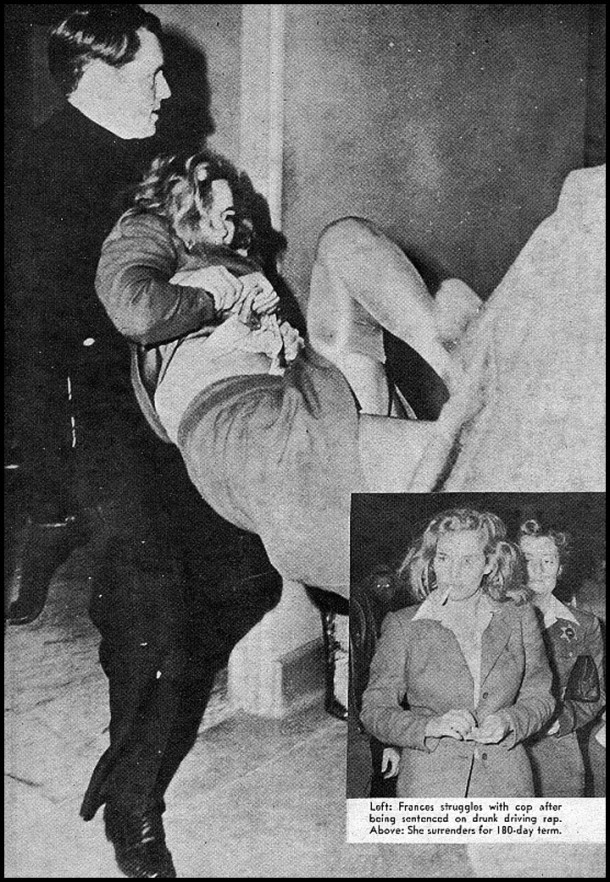 Frances Farmer at her 1943 assaut hearing.

It’s here that things get very bad for Farmer. While committed in L.A., she was subjected to insulin shock therapy, where large doses of insulin were administered to produce daily comas to “shock” out the mental illness. Farmer’s family protested that they had not  given their consent and Frances’ mother won custody of her daughter from the state of California. After a few months in Seattle, Farmer reportedly attacked her mother, who had her committed to Western State Psychiatric Hospital where she was subjected to electro-convulsive shock treatment. After a three month stay, the hospital deemed her cured and released her back into her mother’s custody in 1944. While visiting family in Reno, Nevada, she disappeared only to be arrested for vagrancy in California, an arrest that once again received national publicity. Returning to Seattle, her mother recommitted Farmer to Western State in 1945 where she would spend nearly five years. 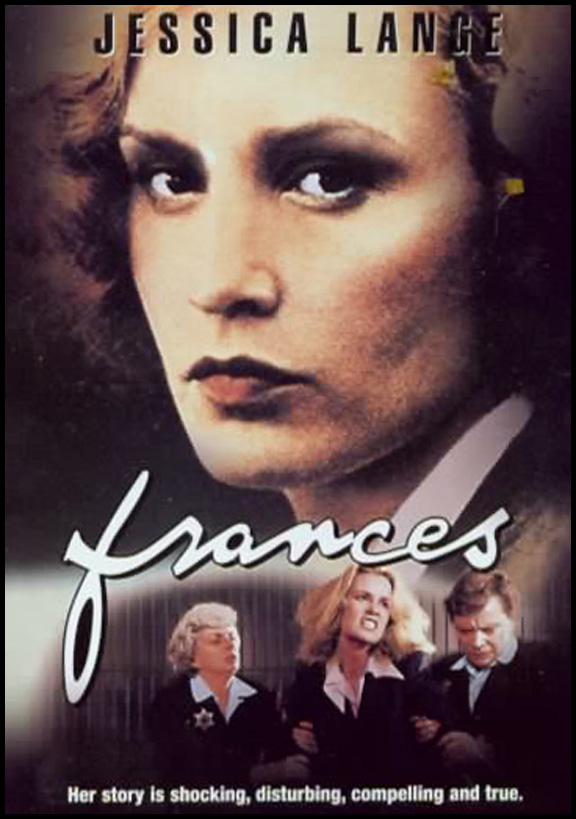 It was her long stay at Western State that is the stuff of legend. In her autobiography she remembers her time there as an “unbearable terror” where she was “raped by orderlies, gnawed on by rats and poisoned by tainted food.  I was chained in padded cells, strapped into straight-jackets and half-drowned in ice baths.” It has been suggested that she was a victim of the notorious Dr. Walter Freeman and his ice-pick lobotomy. Though such a lobotomy was depicted in the 1982 biopic Frances, evidence suggests that, though the hospital asked permission to perform the gruesome procedure on Farmer, her family balked at the notion and threatened legal action “if they tried any of their guinea pig operations on her.” She returned home to her mother in 1950 and took a job in the laundry room of the Olympic Hotel in Seattle, the very same hotel the saw her world premier in Come and Get it fourteen years earlier. Fearing that her mother could have her recommitted again, she petitioned for and won her legal independence in 1953. She moved to Eureka, California and lived quietly working in a photo studio for three years. 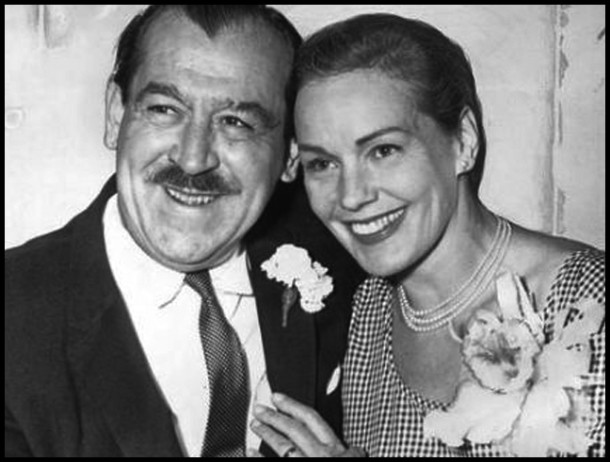 In 1957, Farmer met a self described “radio and television consultant” from Indianapolis named Leland C. Mikesell who persuaded her to return to the lime-light (and who she married in 1958). She did a few interviews, appeared on The Ed Sullivan Show twice, and made the aforementioned appearance on This Is Your Life telling host Ralph Edwards “I would very much like to correct some impressions which arose out of a lot of stories that were written—about me, I guess; but they weren’t about me—suggesting things that I couldn’t possibly have been doing. Which I never did. I wasn’t in a position to defend myself at the time these stories were published. And I’m very happy to be here tonight to let people see that I am the kind of person I am and not a legend that arose. 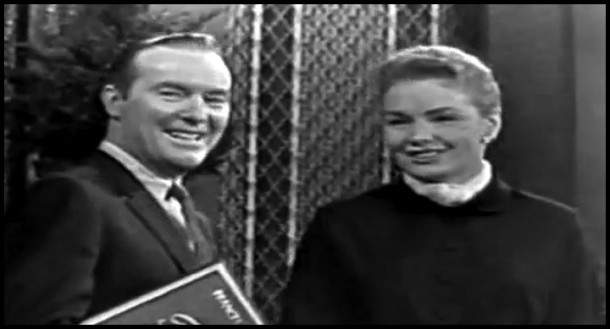 This Is Your Life host Ralph Edwards and Frances Farmer in 1958.

Farmer returned to the stage, doing summer stock in Pennsylvania in the play The Chalk Garden, where she was cast as a woman putting the pieces of her tattered life together. It was during a six-day run of The Chalk Garden in Indianapolis that an executive from WFBM-TV (then the Indianapolis NBC affiliate but now know as WRTV-6) saw her performance and offered her a chance to host her own daytime movie series. She accepted and Frances Farmer Presents aired Monday-Fridays in Indy from 1959-64. 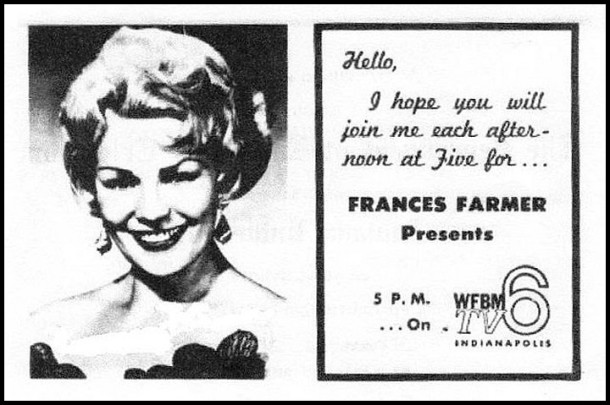 After her time at WFBM (and also her marriage to Mikesell) ended, Farmer returned to the small stage, doing summer productions at Purdue, including a 1965 starring role in Freidrich Durrenmatt’s The Visit, where she played a rich, though handicapped woman, who returned to the poor town she came from and offers to save the town, on the condition that they kill the grocer, who broke her heart when they were young.

While in West Lafayette, she drove her car into a ditch while intoxicated and opted to tap into her roll when the police arrived. “Rather than answering as Frances Farmer, I reverted to my role in the play and [suddenly became] the richest woman in the world, shouting to high heaven that I would buy his goddamned town. I got out stiff-legged and ivory-handed, quoting all the imperious lines I could remember. Unfortunately, this did not [sit] well with the [cop], and a patrol car took me to jail.” This too was seized upon by the media, but yielded a sell out crowd for the following night’s performance. Hesitant to go on stage following the incident, she was persuaded to go on with the show. After which “There was a long silent pause as I stood there, followed by the most thunderous applause of my career. The audience swept the scandal under the rug with their ovation.” It was “my finest and final performance. I knew I would never need to act onstage again. I felt satisfied and rewarded.” 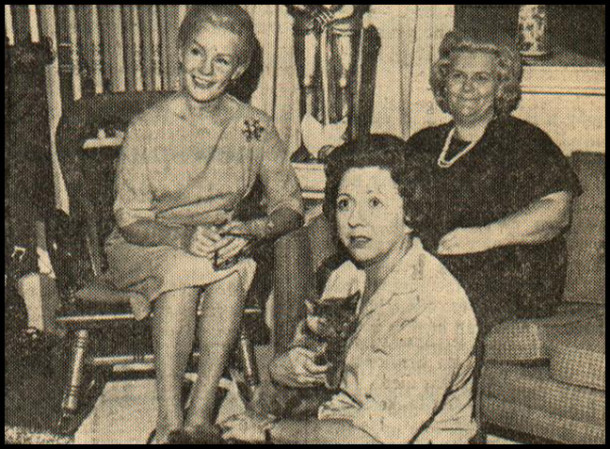 She lived out her final days in Indianapolis, for a short while attempting to start a cosmetic company with friend Jean Ratcliffe, a venture that was stymied by a man who embezzled their funds. She began writing her autobiography but succumbed to esophageal cancer on August 1st, 1970 before it was completed. Jean Ratcliffe finished her posthumous autobiography Will There Really Be a Morning? in 1973. Frances Farmer is buried in Oaklawn Memorial Gardens at 9700 North Allisonville in Fishers. 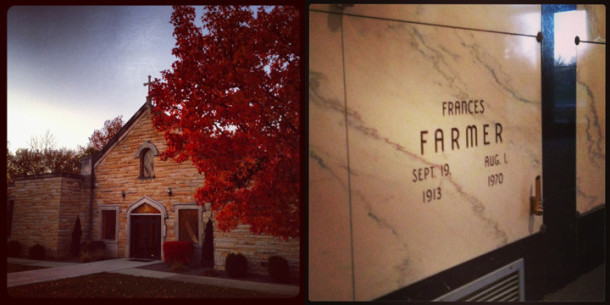