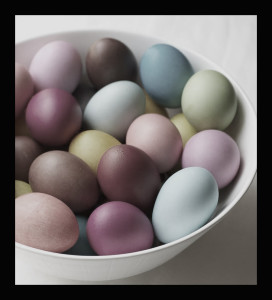 Subtle hues of eggs dyed as they might have been in the 1870s, without the use of synthetic materials. Not all natural dyes would have produced muted colors, however. Image credit: Pinterest

The custom of Easter egg decorating is believed to date back to the 13th century. Eggs were once a forbidden food during the Lenten season. Over the years, people began to preserve their eggs by boiling them and then decorate them in anticipation of the end of Lent — finally eating them on Easter morning.

Therefore, it shouldn’t be surprising to find a “recipe” for Easter egg dye in an 1877 Indianapolis newspaper. By then, the tradition was already an ancient one. What may surprise you, however, are some of the ingredients: 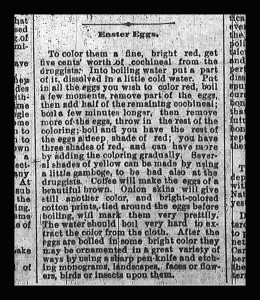 April 19, 1877 Indianapolis Daily News. For the 21st Century reader, the instructions are a little hard to follow.

Easter Eggs
To color the [eggs] a fine, bright red, get five cents’ worth of cochineal from the druggists. Into boiling water put a part of it, dissolved in a little cold water. Put in all the eggs you wish to color red, boil a few moments, remove part of the eggs, and then add half of the remaining cochineal; boil a few minutes longer, then remove more of the eggs, throw in the rest of the coloring; boil and you have the rest of the eggs in a deep shade of red; you have three shades of red, and can have more by adding the coloring gradually.”
-Indianapolis Daily News, “Easter Eggs” April 1877

The recipe lists cochineal, an historically popular colorant. Today cochineal is used to impart a deep red shade to a variety of products. It comes from *prepare yourself* the crushed carcass of a bug (the female Dactylopius-coccus, a South and Central American insect, to be specific). It takes about 70,000 insects to make one pound of cochineal. Check your shelves, and chances are you’ll discover a notation for cochineal, carmine, or carminic acid — all pigments whose origins might surprise (and horrify) a 21st Century egg dyer. 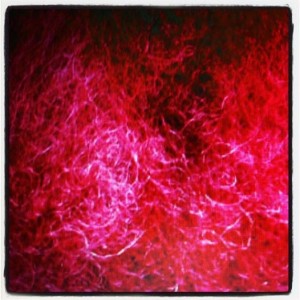 Cochineal has now been surpassed as a dye for cloth by more color-fast synthetic pigments, but it’s still used as a coloring agent for a number of foods, beverages, and cosmetics — because many of those synthetic dyes proved lethal when taken internally or when allowed to leach into the body through the skin.

The “ewww!” factor notwithstanding, cochineal is a safer food colorant than many more contemporary options. 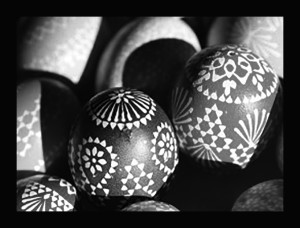 Eggs decorated in the German style. It is believe that the tradition of decorating eggs for Easter first came to Indianapolis with German immigrants.

Around the turn of the last century, Indianapolis apothecaries and drug stores were a veritable gold mine (or landmine) of unregulated, questionable substances.  It would take another 20 years after our egg dye recipe was published, for one Indianapolis pharmacist, James Hurty, to change all of that for Indiana — and indeed for the entire country. However, if you wanted Easter eggs of orange, brown or yellow, you could use kitchen leftovers (per the recipe below) — or simply saunter over to any of the 87 druggists located in town (according to the 1877 Indianapolis Polk Directory) for some Gamboge:

Several shades of yellow can be made by using a little gamboge, to be had also at the druggists. Coffee will make the eggs of a beautiful brown. Onion skins will give still another color…”
-Indianapolis Daily News, “Easter Eggs” April 1877

Gamboge is a gum resin from southeast Asian trees of the Saint John’s Wort family. It has been used across history as a pigment… and a cathartic. (A “cathartic” is a purgative drug. One is made to wonder how wise it would be to boil an egg in a purgative — in other words, a laxative — unless that particular egg was to be bestowed upon that pesky little bully across the street… hmmm…) 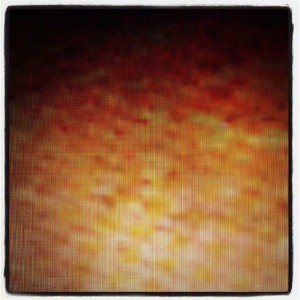 Egg hunts and egg rolling have been popular Easter traditions in Indianapolis and across the county for over a century. The White House Easter Egg Roll, a race in which children push decorated, hard-boiled eggs across the White House lawn, is an annual event held the Monday after Easter. The first official White House egg roll occurred in 1878, when Rutherford B. Hayes was president — one year after our egg dye recipe was published.

One wonders if that White House event might have featured fancier, multicolored eggs. No worries! Our anonymous recipe writer even offered up suggestions for more artful egg decorators: 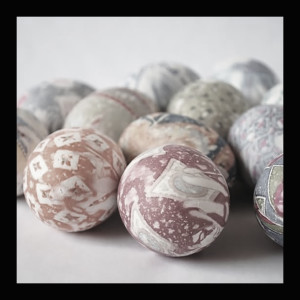 Eggs colored by wrapping them in cotton prints and immersing in boiled water.  Image credit: Pinterest

… and bright-colored cotton prints tied around the eggs before boiling, will mark them very prettily. The water should boil very hard to extract the color from the cloth. After the eggs are boiled in some bright color they may be ornamented in a great variety of ways by using a sharp pen-knife and etching monograms, landscapes, faces or flowers, birds or insects upon them.”
-Indianapolis Daily News, “Easter Eggs” April 1877 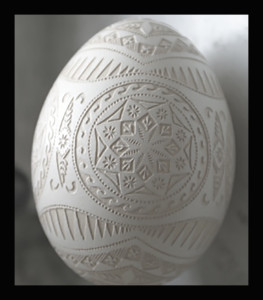 Here’s a pattern for you (if you’re really, really good with that aforementioned pen-knife).  Image credit: Pinterest

What are your family’s favorite Easter egg customs?
Growing up, did your Indy church or civic organization have a memorable Easter tradition?
Leave your memories in the comment box below.
Special thanks to the Indiana State Library for maintaining a fine repository of early Indy newspapers, and the members of the Facebook group, Marion County Indianapolis History for research and resources. 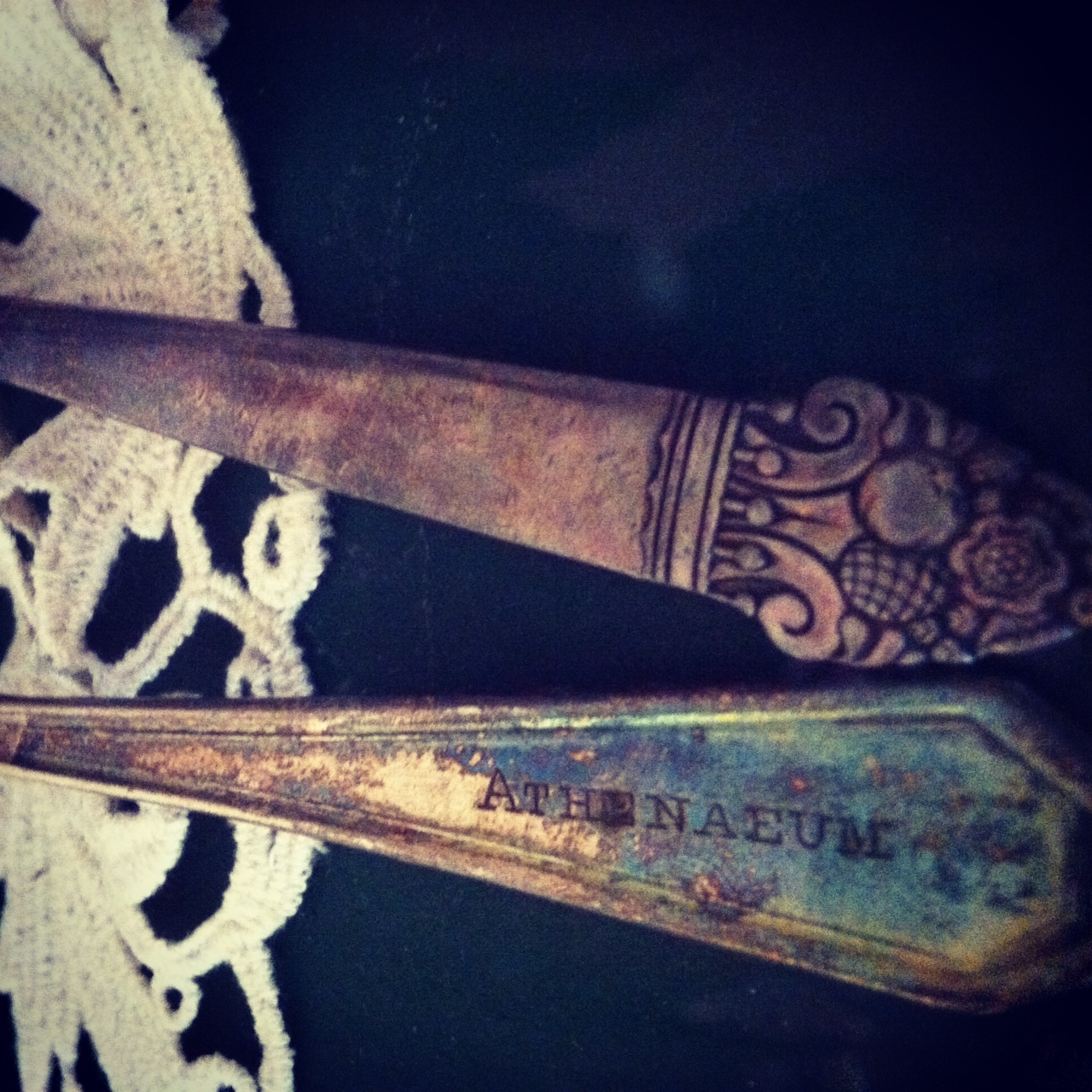