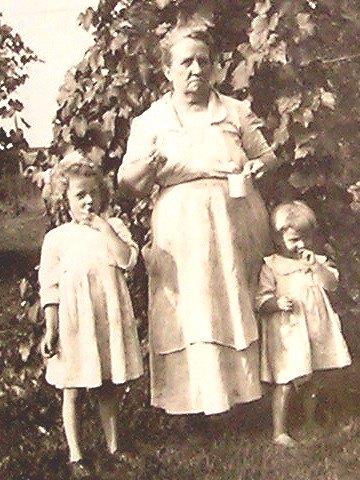 Eloise (r) and her sister Patty with Grandmother Sarah Messersmith.

Have you ever contemplated writing down your life story? If you’re like most of us, you entertained the thought for all of 10 minutes before saying to yourself, “Who would be interested in MY life?”

Writing for HI, brings personal memoirs written by Indy area residents out of the woodwork. They vary in era, length, style and… “writership,” but what they have in common is this: fascinating contents. The eras of our great-grandparents, grandparents and even our parents were quite different than the era we inhabit now… but in reading these personal stories of strangers, you can better appreciate just how differently we live in this generation.

What follows are excerpts from the life story of Mrs. Eloise Risley Maners, a resident of Indianapolis who passed away just recently at the age of 93. Her father contracted Tuberculosis and was in a “sanitarium” to convalesce for a year, leaving her mother alone to support the family with the help of relatives. Despite the hardships, her childhood appears to have been a joyful one. Here is one small glimpse into life in rural, Depression-era Broad Ripple. 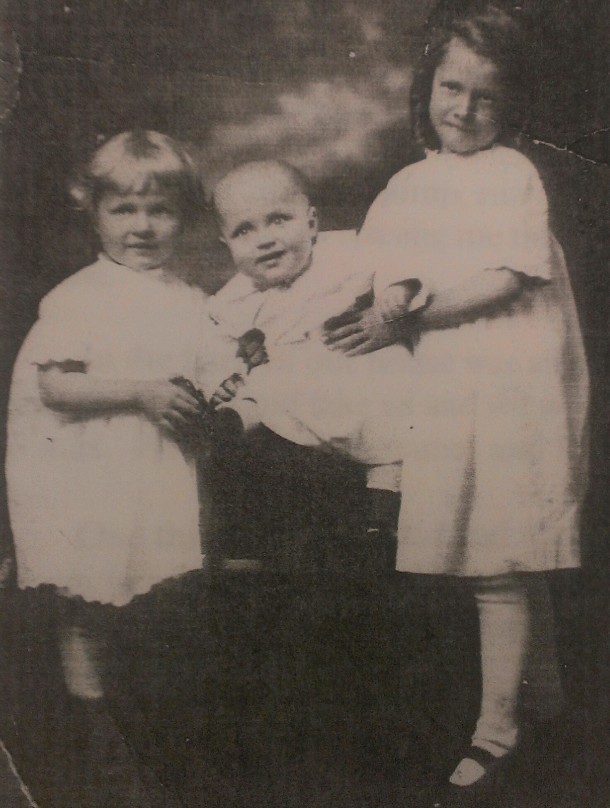 Earliest Memories
“I was born July 7th, 1920 at Deaconess Hospital in Indianapolis. I don’t know what house we lived in then, but we lived in Broad Ripple. The first house I remember was on 63rd Street. I remember having a crib in the front room that was near the sidewalk. It seemed like a man went by every night and it scared me. At around 3 years old, our family moved to a new small house at 6562 Ashland (which is now called Carrollton). There was an unfinished upstairs where all of us kids slept, and 3 rooms down[stairs]. On my 6th birthday, when I awoke, there was a string tied to my bed and I followed it downstairs. It was tied to a little rocking chair. What a nice surprise!” 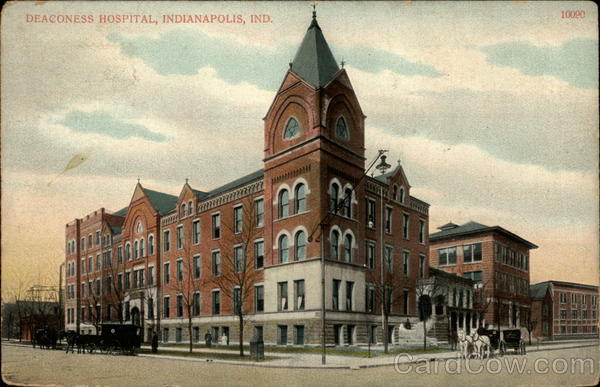 Games and Fun
“My sister Patty and I made a lot of mud pies in the summer. The best mud pies were made from a special kind of dirt that would become creamy when you added water. Then we would pour it in old can lids and top it off with berries. We never ate the berries as some were poisonous.”

“In the back of our house was an Inter-urban track. On summer evenings, Dad would take us and would stand on the tracks and gaze at the stars. He told us their names and I remember most of them to this day.”

“On the other side of the Inter-urban track, behind our house, was a playground and in the summer the Parks Department had a lady who taught the children handicrafts. I really enjoyed this and I remember making belts out of bread wrappers.”

“Every Saturday we went downtown [Broad Ripple] to see a movie and a stage show. If we got in before 2:00 p.m., it was 25 cents to see both shows. Tokens were 4 for 25 cents and we could share a nickel Pepsi at the drug store. So for 80 cents we had a nice Saturday afternoon.” 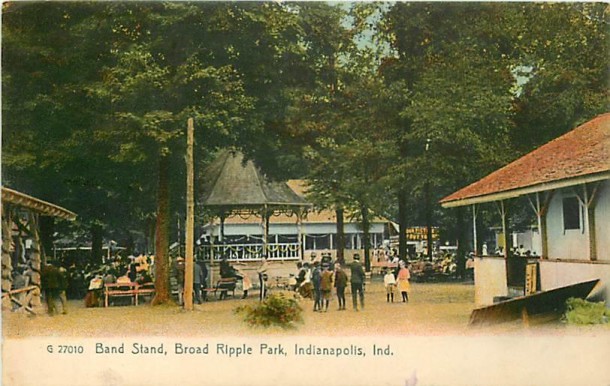 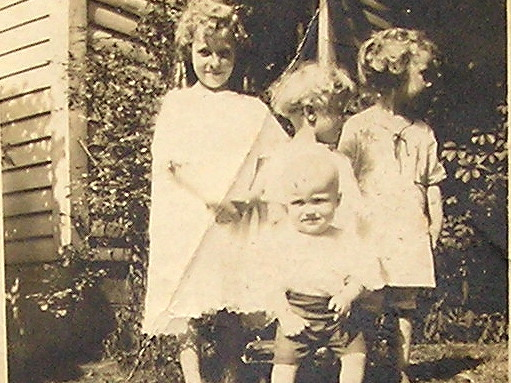 Neighborhood kids: Eloise is in the middle and brother Joe is the baby in front.

Technology of the Times
“The Featherstons who lived next door had a bathroom and a furnace,” Stated Eloise. Eloise’s nephew added, “Because Aunt Eloise’s grandmother was watching the kids when her mom Ruby Risley was working, they stayed at Sarah Messersmith’s Broad Ripple boarding house.  In the backyard was a three hole outhouse.  When little Eloise had to use the facilities, she would take Joe baby along and set him at the front door to let her know if someone was coming.  Not only were the boarders using the outback but you could see it from the street and sometimes it became a busy place.”

“Grandma had a feather mattress and the bed never really looked made. One time my mother made a straw tick mattress for my bed and it was real sticky. There was a cellar under the kitchen where Grandma stored apples and potatoes. I can still smell it as it had a dirt floor. She had a gas stove in the kitchen which was unusual back then. It seemed as though her house always smelled of gas.”

“In the spring of 1933, we moved from the little damp house at 6562 Ashland to 6539 Ashland. Mother thought the damp house was bad for Patty’s asthma. The new house had an indoor bathroom which was really nice and also a furnace.”

“When I was about 10 or so, sliced bread became a big item – up until that time you could only get loaves.”

“The ice man drove a wagon with a horse pulling it and we had to put a sign in the window so he would know how much we wanted – 25lbs, 50lbs, 75lbs, or 100lbs. The garbage man also had a horse-drawn wagon. I was scared to death of them and would hide. The boys in the neighborhood told me they would take me away.”

“Aunt Elsie was a hard working woman, [who] took in washings and ironings. She washed in the basement, carried them up the stairs and outdoors to hang on the line to dry. Then she had to iron. One gentleman she washed and ironed for was Mr. Stockman. He owned a dance studio and he gave dancing lessons to all of her 4 kids. Wonder how many starched white shirts she washed and ironed for their lessons? She even paid for lessons for me.” 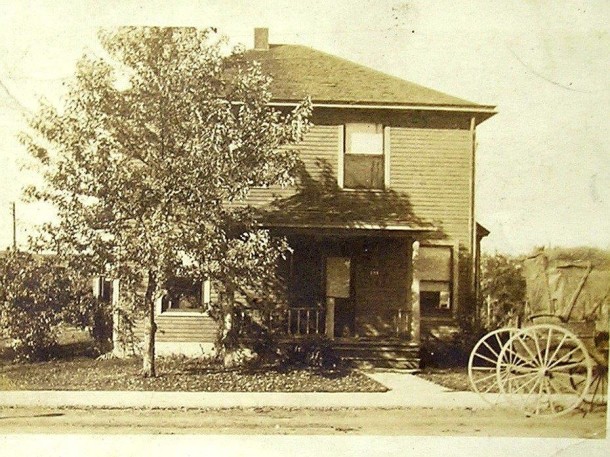 When Broad Ripple was Rural
“There was a swamp real close to our house and it was so much fun. Patty and Jimmy would go fishing there. I never fished but I loved to go there to see the hundreds of mounds of mud which the crawdads piled up. There was also a dump which burned all the time we lived there. Sometimes it really ‘stunk’!”

“…Grandmother Messersmith lived in a large farm house. There was a very large living room with big windows at each end of the dining room… and a large enclosed back porch where Grandma washed her clothes. The pump was there. There was a beautiful stove in the dining room which burned coke. On winter nights we would turn off the lights and watch the beautiful patterns the stove would make on the walls because of the Isin-glass windows.”

“When I was very small, the gypsies would stay in Broad Ripple Park. Grandma Messersmith told me they stole, but I never really saw them.”

“My Grandmother Risley belonged to the “Old Settlers” and in the summer they would have reunions in the park. We would all go sometimes and Mother would take deviled eggs, bean salad and fried chicken.” 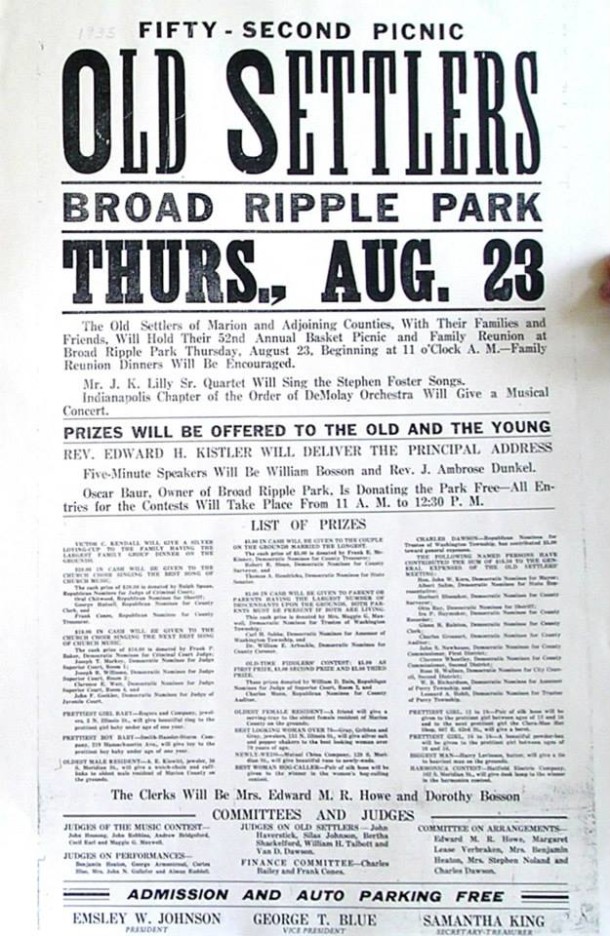 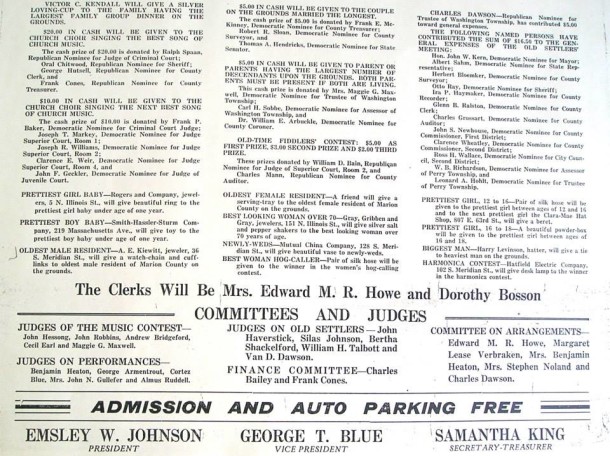 Timeless Wisdom
“During all the years of growing up very poorly, we were able to eat right because of my mother’s knowledge of food and what to cook and how to cook cheaply. She knew how to get the most nutrition for the money.”

“One thing both my Dad and Mother knew was that children are wet cement… and everything you say or do to them leaves an impression on their lives. Thank God for parents who know this!” 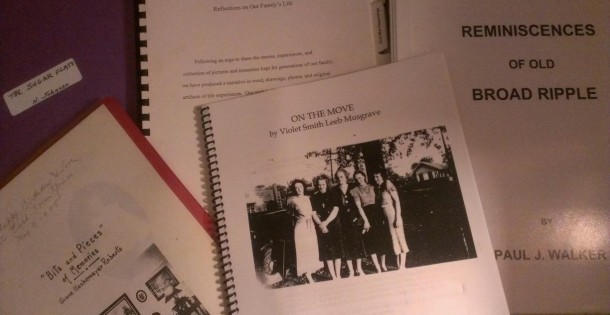 A collection of personal histories that have been gifted to me during my research for Historic Indianapolis articles — a fascinating view into the simplicities and complexities of life in the early 20th Century.

Consider how much has changed in the world during Eloise’s lifetime, from horse and buggy to… man on the moon… to smartphones that nag you when you’ve taken a wrong turn on the highway. Consider how much will change in your lifetime. If you simply write down one memory each year, you could pass down a treasured and important understanding of THIS era to your family.

Have you begun your life story yet? If you have, what tips do you have for others who may feel daunted by this task? Or what pieces of information do you think are important to save? 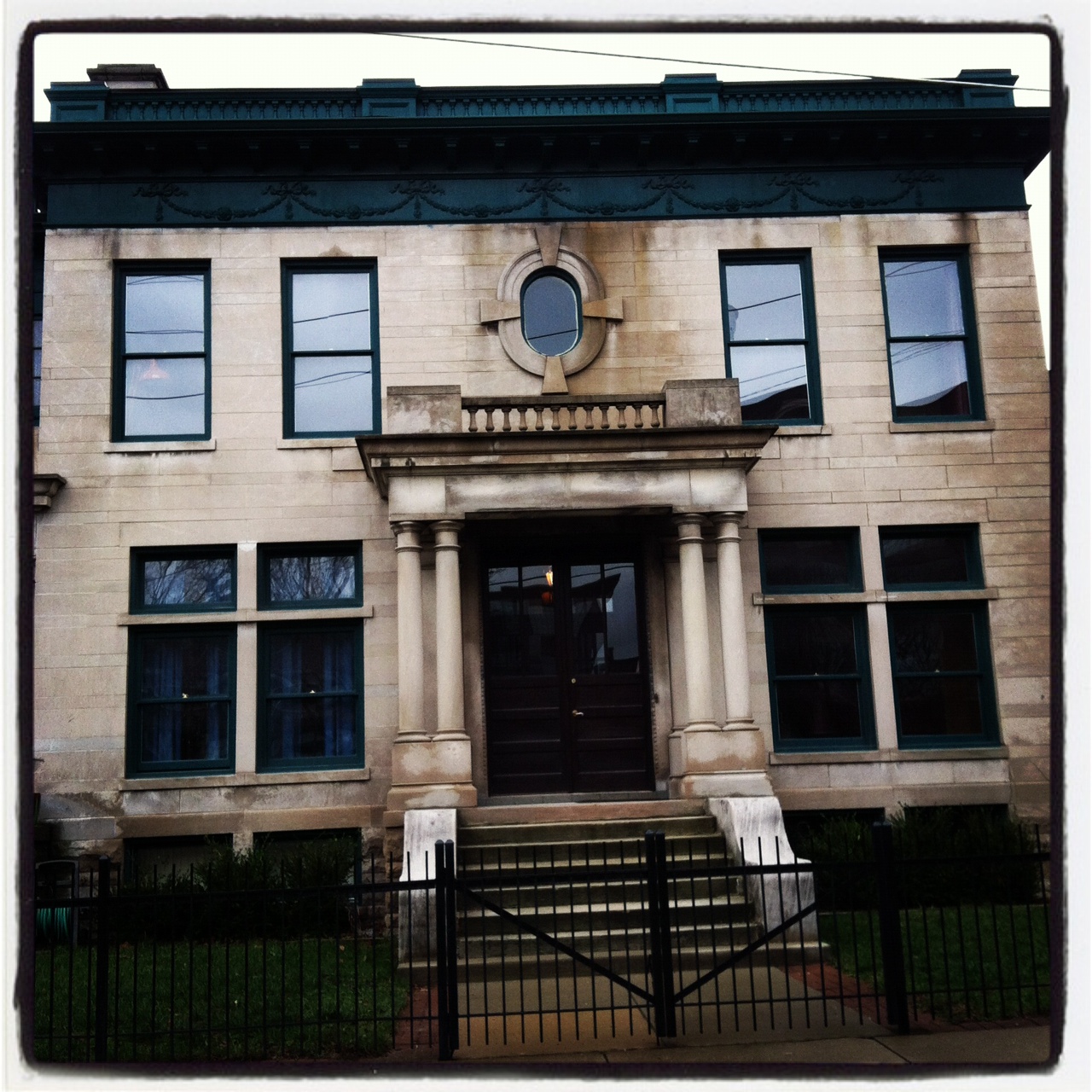