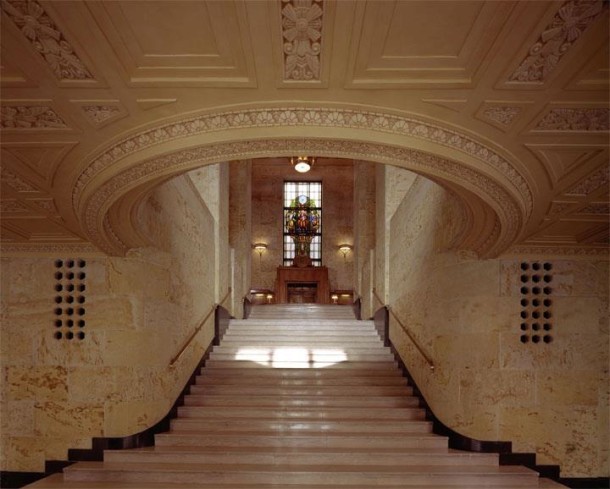 Is it a cathedral or an art museum about which I wax poetic? No.

I opine about the Indiana State Library building. Have you been there? 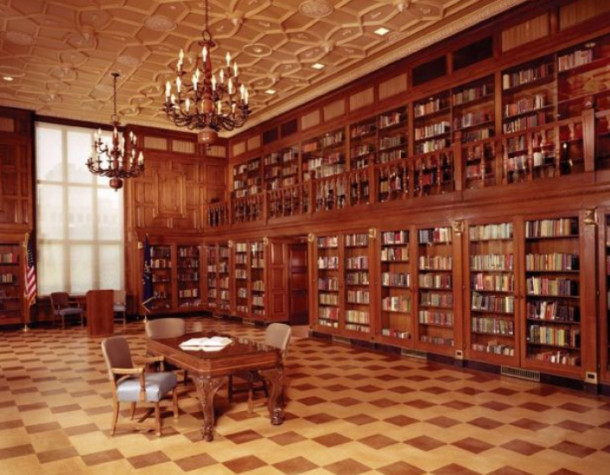 The institution goes way back — before the current-day building. The first official mention of a state library for Indiana is made in the Journal of the Constitutional Convention, on June 28, 1816. The capital of Indiana Territory was then at Corydon, IN. The Assembly didn’t take formal action until the capital was moved to Indianapolis. Then, by an act approved February 11, 1825, the State Library was definitely established, an appropriation made, and the secretary of state designated as librarian. In 1841 a law was approved making the library a separate institution, and in 1867 an act provided that the law section of the library be placed under the control of the judges of the Supreme Court (an arrangement still in force). In 1933, the library was made a part of the Department of Education. 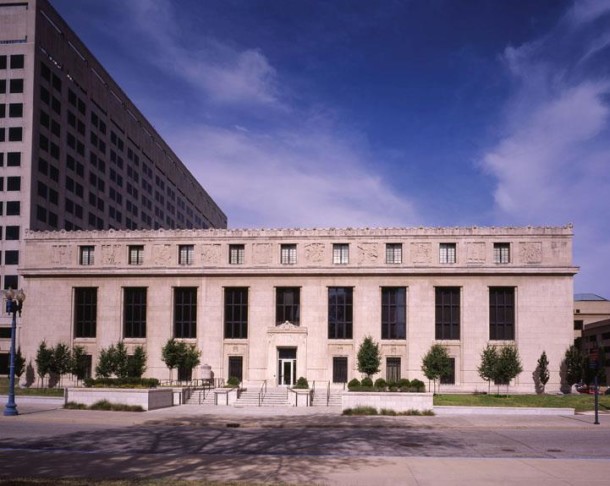 This is the original State Library entrance on Senate Avenue. Visit the outside of the building to observe stone carvings (near the roofline) that are symbolic of Indiana history.

Throughout its earliest days, the Indiana State Library (ISL) was located in the State House. However, in 1929, the Indiana General Assembly authorized a special levy of two cents spread over three years in the expectation of raising about one million dollars for the cost of a site and building. Governor Harry G. Leslie appointed a building commission and acquired a site at the corner of Senate Avenue and Ohio Street in 1931. An architectural competition was held under the direction of Mr. Arthur Bohn of Indianapolis in October of that year. Pierre & Wright of Indianapolis were the architects selected and plans were ready in March, 1932.

The result, a magnificent Indiana limestone building, was dedicated December 7, 1934. The building was conceived as the first of a series of state buildings extending from the State House toward the White River — a planning concept that was only fully realized in more recent years.

A contemporary addition to the Library was made to the west. The addition was designed by Burkhartt, Shropshire, Boots, Reid & Associates and dedicated in 1976. 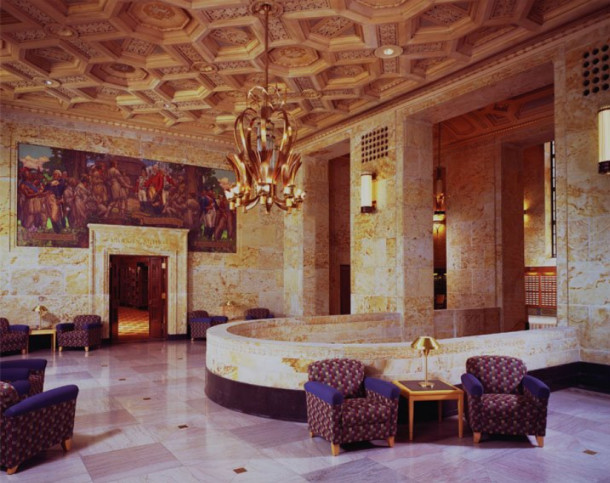 A walk around the outside of the older portion of the library reveals a collection of stone carvings on the façades near the roofline symbolizing the advance of civilization:

Throughout the construction of the building every effort was made to use Indiana materials. The exterior is entirely of Indiana limestone. The interior features Monte Cassina sandstone from St. Meinrad Abbey, and all of the interior woodwork and much of the furniture is of Indiana walnut. (The four principal rooms in the first story boast veneers from a single tree.) The glazed blocks that cover the walls in the stacks, service halls, and stairs are also an Indiana product. 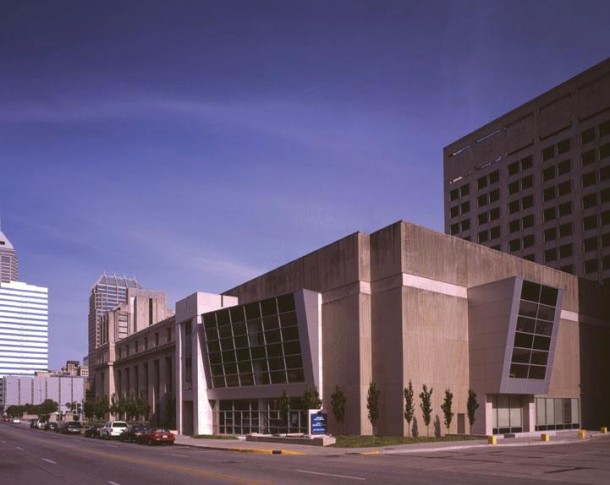 The newer wing of the State Library.

Today, the ISL houses vast collections with over two million volumes and three million manuscripts, as well as thousands of maps, federal documents, microfilm, and more. Specialized collections are available in the areas of: 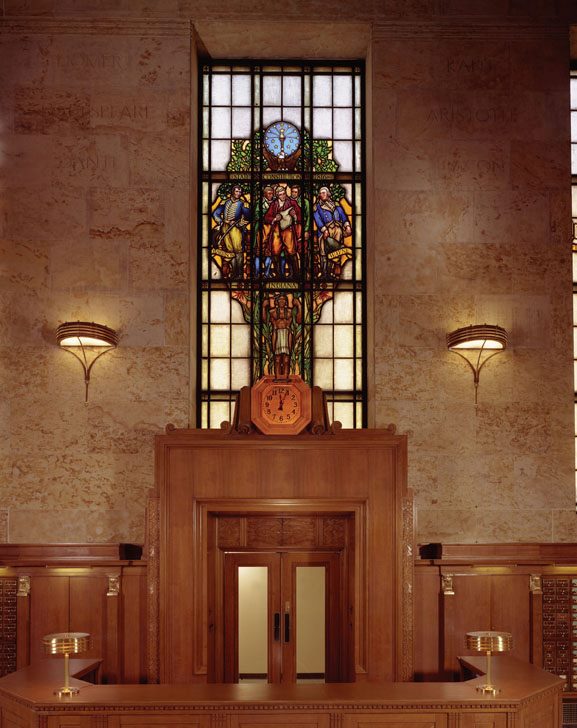 The ISL Genealogy Collection offers published and unpublished resources relating to family history. Though all materials are bound to the library facility, Library experts will help you begin your search. Resources include: 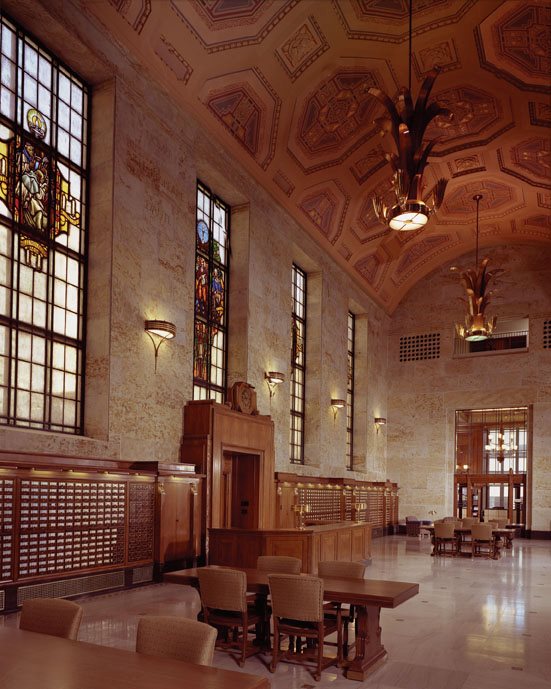 The Great Hall. The foyer and Exhibition Hall are stately rooms. Faced with St. Meinrad stone, lighted from tall windows, and provided with decorative floors and ceilings. The center window in a group of five were designed for this room by J. Scott Williams of New York. 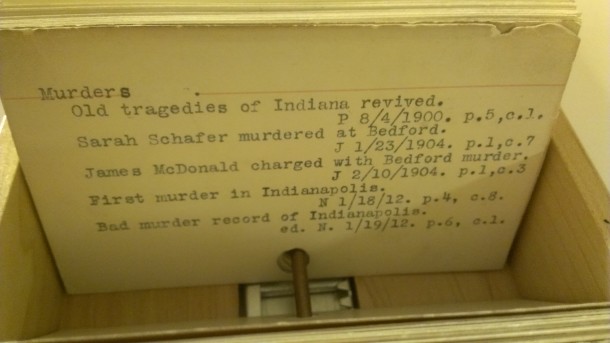 That’s right! Those are REAL card catalogs in the Great Hall. (Visitors younger than 40 may not even know what they are…)

The Indiana Collection provides reference service on all aspects of Indiana — historic and current. This division collects and maintains print and non-print materials documenting:

One of four murals in the State Library by J. Scott Williams – The Building of the State: Constitution, Legislation, Administration, Justice, Education, and Literature. 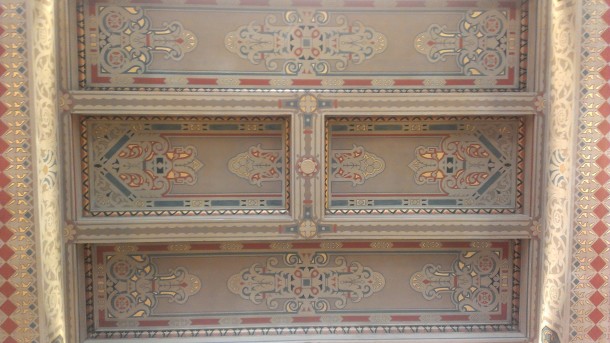 The ceilings are decorated in color applied directly to the exposed concrete. At intervals on the great beams which occur in the length and along the sides of the rooms have been painted designs from many of the distinctive printers marks used in this country and the old world. 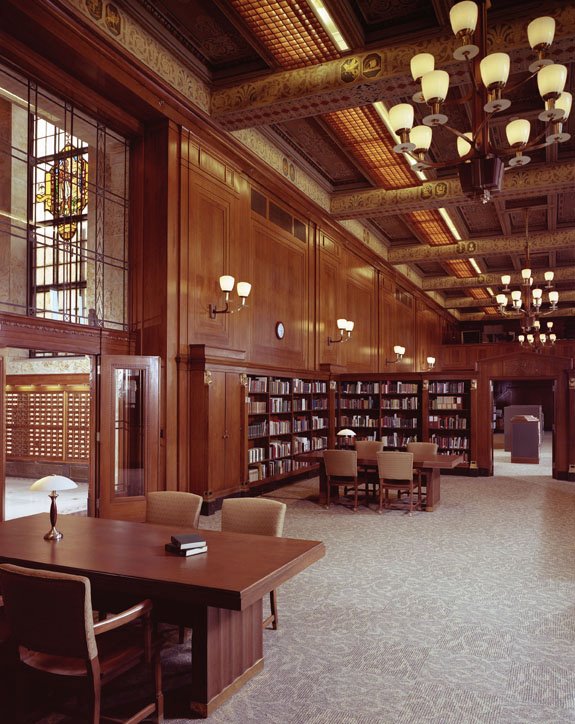 View from the Manuscripts Room

The Government Documents Collection maintains nonfiction collections for use by legislators, officials, employees, other libraries and residents, including assistance with: 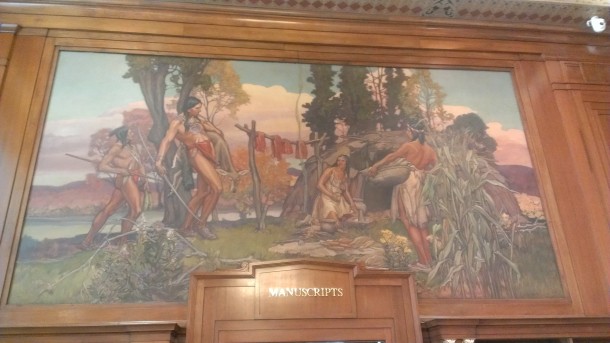 The Talking Book and Braille Library maintains and circulates an extensive collection (over 22,000 digital books, etc.) of materials, free to Indiana residents who have difficulty reading print, including:

Recognizing the ISL as a Hoosier treasure, Governor Mitch Daniels signed Senate Bill 485 into law in the spring of 2011. The bill, authorized the Indiana Library & Historical Board (ILHB) to establish a nonprofit foundation to solicit and accept tax-deductible contributions. The Indiana State Foundation raises funds to support the Indiana State Library and statewide library services and programs that benefit all Hoosiers. 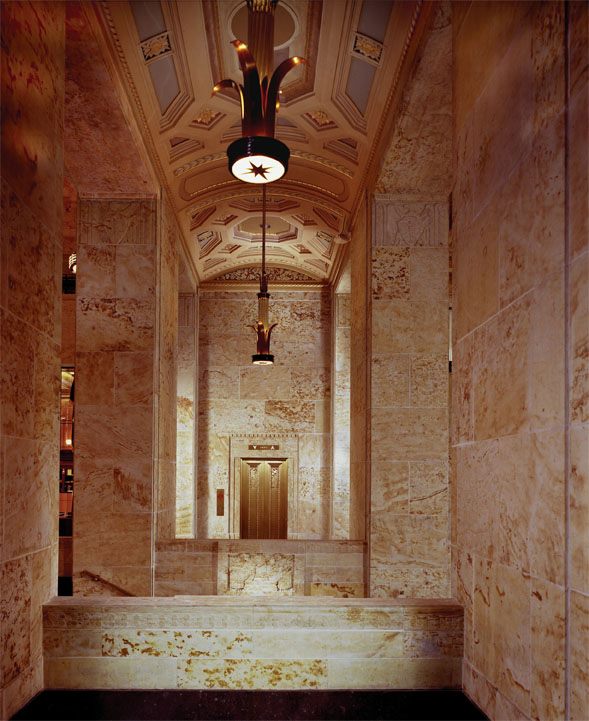 The building is an ornate treasure box, housing examples of amazing craftsmanship, art, history, and literature. If you haven’t been… it’s well worth a visit!

In the comments section below:

What is your favorite highlight in the Indiana State Library?

What is your favorite Indianapolis “Hidden Gem”?