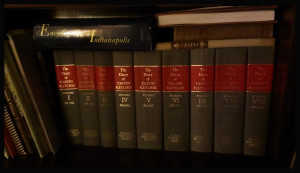 One well-known Indianapolis pioneer and historian documented his daily dealings in what came to be a nine-volume set of books, published by the Indiana Historical Society: The Diaries of Calvin Fletcher. But, this may be a bit ambitious for the average personal historian.

It’s a right and wonderful thing to save a venerable old building from the wrecking ball of “progress.” It gives great pleasure to saunter down halls provided by the craftsmanship and industry of our forefathers. Buildings are tactile, tangible. But, while historic structures and records and maps and streets provide the framework of our past, they aren’t History.

Every day a memory of the 20th Century – its sights and sounds, its terrors and triumphs – disappears. Yielding to the inalterable advance of time, our grandparents and parents are departing — often leaving us with no notion of their stories before we were born.

We’re losing WWII vets, all in their 90s, at the rate of approximately 555 a day, according to recent US Veterans Administration figures.”

Ask yourself this: Do you know how your parents met? What about your grandparents? Great-grandparents? What did they do for a living? Who was the artist of the family? Who did you inherit your musical talent from?

If you can’t answer those questions, you have some work to do! 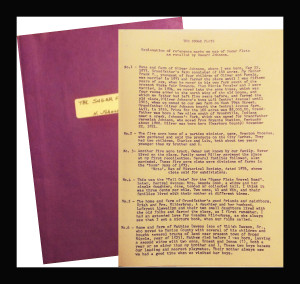 “The Sugar Flats” is the 7-page personal history of early Indianapolis inhabitant, Howard Johnson, recorded by Grant M. Hessong in 1970. Hessong compiled the booklet from manuscripts written by Johnson in 1968-9. This booklet was mimeographed.

hiStories
Collecting information from your relatives may seem daunting at first, but really it’s as simple as story telling. In fact, experts say the best interview comes from a casual conversation or storytelling session, rather than a formal Q&A. Formal interviews can be tricky if the setting or recording equipment makes your storyteller uncomfortable. To avoid awkwardness, try these tips for helping the conversation along:
Prepare: Usually, people like to tell their own stories and getting the ball rolling takes little more than a comfy room, and a listening ear. However, if you are using a recording device, you should practice with it for a few minutes and understand its features before the interview. Also, you should have your relative’s permission to record their stories. Have paper and pencils available for them to sketch any maps or remembrances they might have and make sure you have a still camera (or a camera phone) handy to catch their facial expressions or to make quick copies of any still photos they are willing to share.
Is Uncle Gus shy about his military stories? Bring along a friend his own age with similar experiences and then just sit back and listen to them reminisce. They will talk about things you would never have thought to ask about. 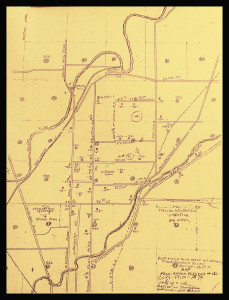 Click to enlarge the drawing of the 1888 Indianapolis “Sugar Flats” by early Indy inhabitant, Howard Johnson. When collecting personal histories, be sure to have pencils and paper handy, just in case!

Number one [on the map] is the home and farm of Oliver Johnson, where I was born, May 22, 1873. Grandfather’s farm consisted of 160 acres. My father Frank P., youngest of four children of Oliver and Pamela, was married in 1871 and farmed the place until I was fifteen years of age, when he moved to his own farm south of the present Fair Grounds. When Minnie Fessler and I were married, in 1894, we moved into the same house, which was four rooms added to the north wing of the old house, and which my father had left five years before and [we] farmed the old place, (Oliver Johnson’s home 4451 Central Avenue) until 1905, when we moved to our own farm on West 79th Street. Grandfather Oliver Johnson bought the Central Avenue farm, 4451, in 1855. Price for the 160 acres was $8000.00… ”  -Excerpt from Howard Johnson’s description of the Indianapolis area once called the Sugar Flats

Engage: People are more comfortable sharing their stories when they feel that you’re genuinely interested. Maintain eye contact and really listen as they speak. Show interest by nodding and occasionally asking relevant follow-up questions. Don’t be flustered by periods of silence. If your subject seems to be stuck, she may actually be caught up in old memories. You might simply ask, “What are you remembering right now, Grandma?”
Prompt. The best interviews come from questions that ask when, why, how, where and what, instead of just requiring a “yes” or “no” response. You may also want to ask how an event made your interviewee feel. Emotions are something you can’t learn from documents. Keep your questions brief, and present them one at a time. If you ask a series of questions at once, chances are that your subject may only answer the first or the last.
Setting.  In each story, try to establish an approximate date, where your relative was, and what they were doing at the time of the event. This helps you to learn how much of their information is first-hand knowledge, and how much is based on the stories of others. 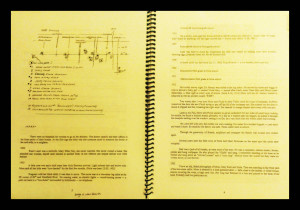 Click to enlarge pages from the personal history of Violet Smith Leeb Musgrave. Mrs. Musgrave documented her parents’ recollections of Indianapolis’s Nora area as far back as 1800. She gifted her family with 50 pages of Indy-based personal history by adding a photo and a story or two, each year, until 2003.

1912 – On a cold, snowy night, Dr. Hersey was called to the log cabin. He arrived by horse and buggy in time to deliver a baby girl — named Violet May — named after Dad’s sister Clara May and Mom’s sister Stella May — Hair light in color; eyes of brown. (Born 2-19, 1912) Mom told me Dr. Hersey wanted to adopt me as well as another couple. WHY? Two weeks after I was born Mom sent Floyd to Jerry Tellis’ store for a can of molasses. As Mom looked out the door she saw Floyd trying to pry the lid off the molasses can. She rushed our the door to rescue it, tripped and fell, breaking her right wrist. She learned to change diapers and sweep with one arm…”
— Recollections of Mrs. Violet Musgrave, “On The Move”

Flow. Try not to interrupt a good story just to clarify a point. Instead, jot down your questions and ask them later. Even if your subject gets off track a little, let them finish their story before steering them back on topic.
Don’t challenge accounts that you think might be inaccurate. Your interviewee may just have a different perspective, and a challenge may put her on the defensive or even shut down the interview.  If you know of another version of the story, you may want to tactfully mention this and give your relative the opportunity to respond.

Investigate. Once you’ve established a comfortable rapport with your interviewee, the best stories will come from personal questions – the ones that might elicit laughter or tears: the thrill of first love… a most embarrassing moment… the feelings he had as he left for boot camp. These are the questions that will give you rich details.
Visuals. One old photograph can elicit an hour of story telling, so imagine the stories an entire album or home movie might bring to mind. Bring your own props or ask your interviewee if she has any family photos or heirlooms to show you. For photos, ask if she knows when and where the photo was taken, the reason or event, and who the people in the photograph are. For family heirlooms ask questions such as: What’s the story behind this thing? How was this used? Who made it? How did it come to you?
Archive. Once you have written or recorded your relative’s stories, make sure to share this with the whole family. A single copy could be lost or destroyed, but making and distributing many copies increases the likelihood that the material will live on for generations.

As much as we all might prefer the immediacy and detail of digital recordings, it’s good old paper that will stand the test of time. Recording media and devices come in and out of vogue ever more quickly as technology advances (remember the VHS?) but paper copies of pictures and written stories have not proven obsolete in thousands of years. 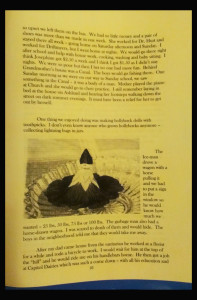 Click to enlarge this page from Mrs. Eloise Risley Maners’s personal history, “Growing Up In Broad Ripple.” Her 13-page booklet is packed with Depression-era stories about local businesses and make-do family fun.

Grandma had a feather mattress and the bed never really looked made… She had an outdoor toilet with 2 seats since she lived on the main street in Broad Ripple, people would walk around the house and use it. Every summer a man would come and clean out the out-house. What a smell! How those men did that for a living I’ll never know! Probably they needed the money as nearly everyone was poor then.” — Excerpt from the recollections of Mrs. Eloise Maners, “Growing Up In Broad Ripple.”

Next. Don’t sweat it if you don’t have a thorough accounting of grandma’s background after a couple of visits. Having something is still so much better than what you had before you started the project. But now it’s your turn. What do your children know about your childhood? Before you even have a chance to think, “My life isn’t that interesting,” remember that the people quoted in this article probably thought exactly the same thing… and yet we read their accounts of everyday life with fascination because their lives were so different (and yet the same) from our own experiences.
Start. If the idea of writing an autobiography freaks you out, just do this: Write down one memory from every year of your life. Just one. Then, on your birthday every year, add one more memory to your story. There will be a day when your grandchildren will cherish reading the accounts of your “everyday” experiences as they effortlessly whizz through the atmosphere in their flying cars on the way to grandma’s house… 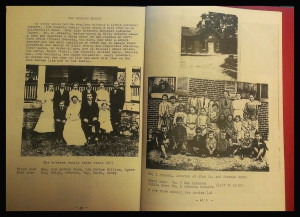 Click to enlarge the pages of Grace Hackemeyer Roberts’s “Bits and Pieces of Memories,” a 52-page personal recollection of Indianapolis’s Millersville area at the turn of the 20th Century.

In 1914, I started going to Manual Training High School. World War I had begun, and social activities in general were curtailed. Shortages of every kind existed and food became top priority. Those were bleak years during my high school days. I rode the Fort Harrison Interurban Car to the terminal station downtown, from there I walked more than a mile to Manual Training High School. My favorite subjects were; Drawing, Sewing and Cooking, but our cooking classes were mainly learning to substitute for things that were in short supply – especially sugar and white flour. My senior year was the happiest when I spent six out of eight hours in the Art Department.”
— Excerpts from the recollections of Grace Hackemeyer Roberts, “Bits and Pieces of Memories”

Have you written your personal history for your family?
Have you recorded a family member’s memories for posterity?
In the comment box below, share your tips and tricks for getting the work done!
________________________
Special thanks to the loaner of this collection of memoires, who prefers to remain anonymous — and to the writers themselves who have given this writer hours of enjoyment and the impetus to pen her own story. 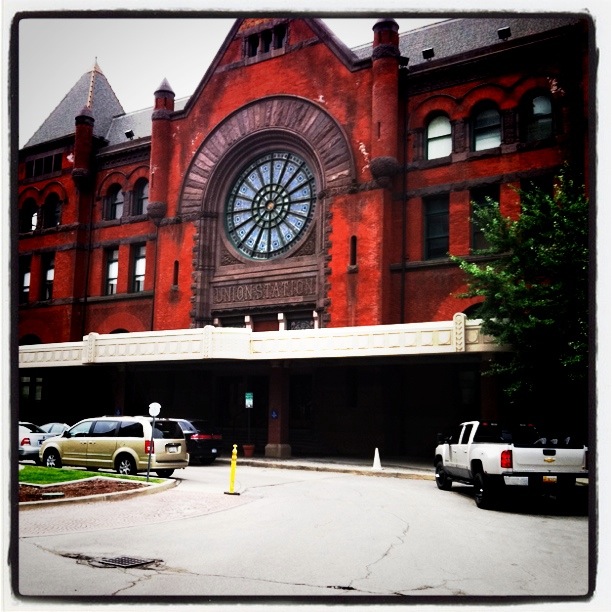 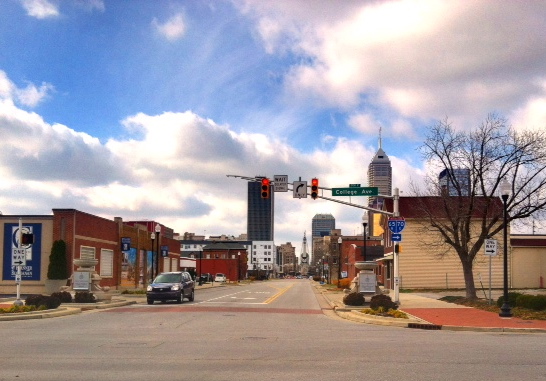 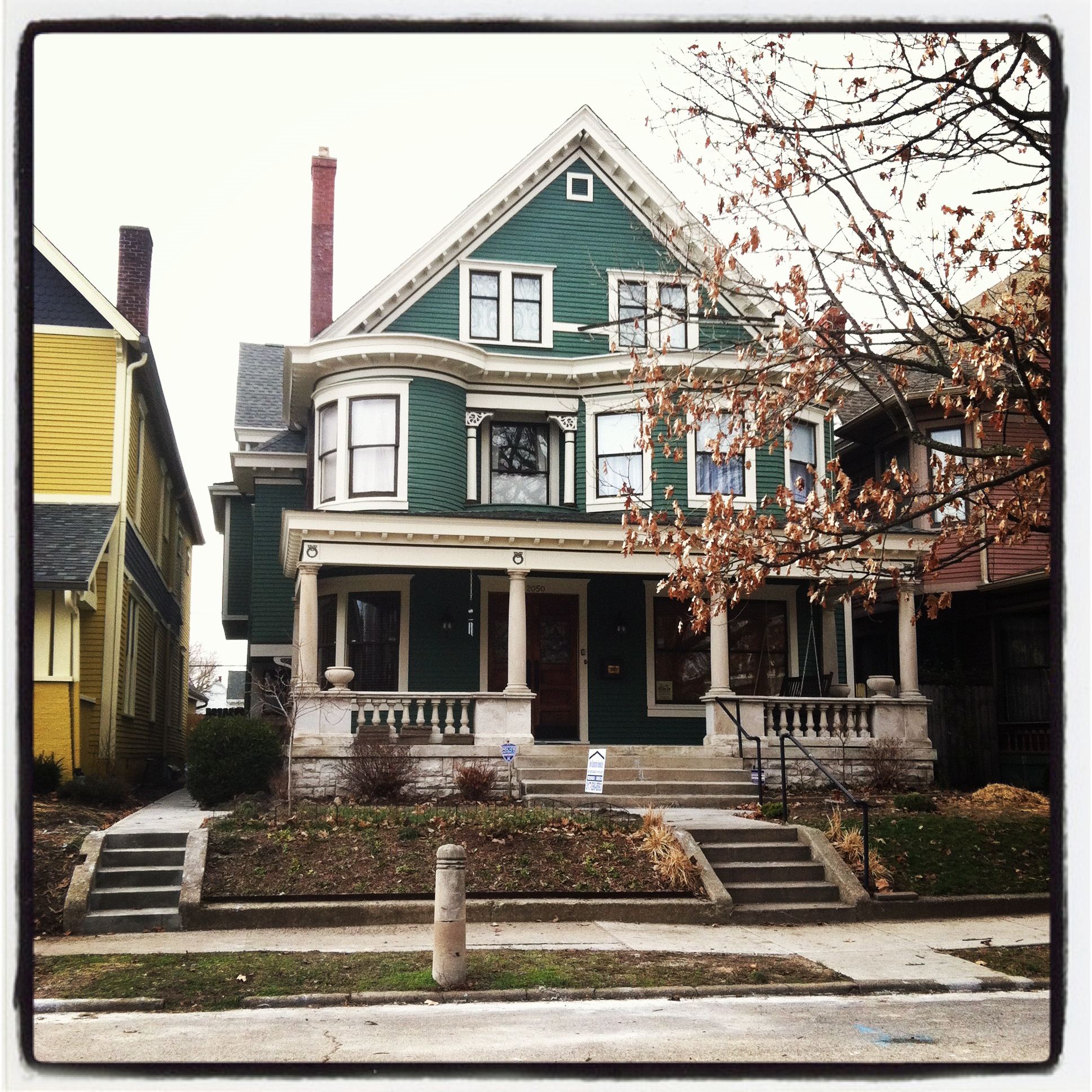