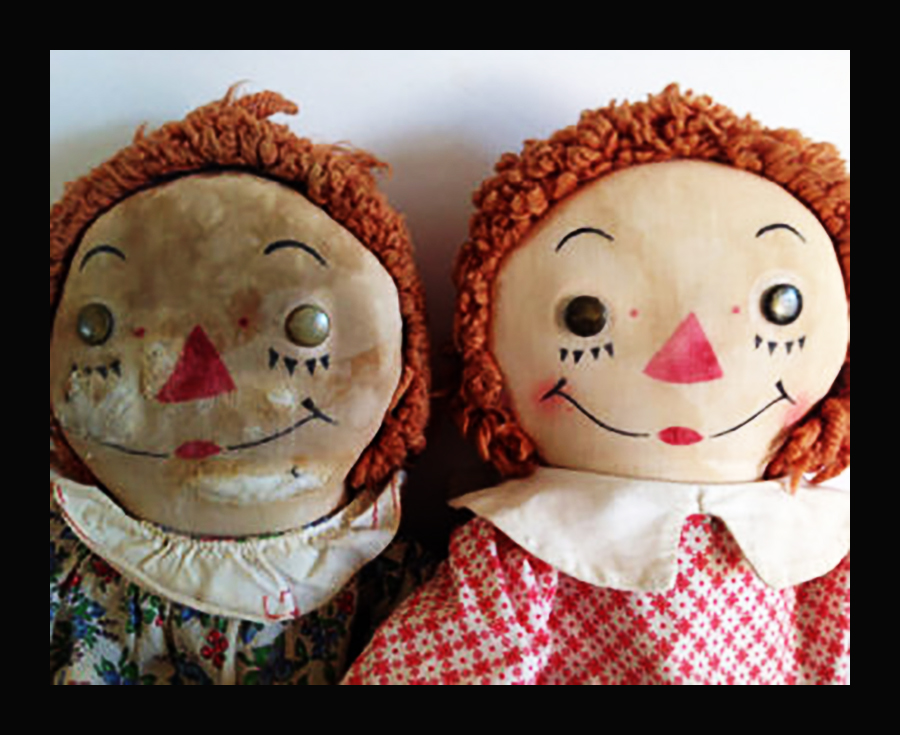 Happy Independence Day, Indy! Baseball, hotdogs, apple pie and … Raggedy Ann. It’s hard to find anything more “Americana” than the perpetually-perky little red, white, and blue doll. Were you aware that she has an Indianapolis connection?

Raggedy Ann’s creator, John Barton “Johnny” Gruelle (1880-1938) moved with his family to Indianapolis from Arcola, IL when he was a young boy. His father, Richard Buckner “R.B” Gruelle, a professional portrait and landscape artist, became a member of the highly regarded Hoosier Group, a community of impressionists which included Theodore C. Steele, William Forsyth, Otto Stark, and John Ottis Adams. Another family friend, James Whitcomb Riley, enthralled the Gruelle family with stories of his newspaper work, poetry and his vagabond lifestyle. 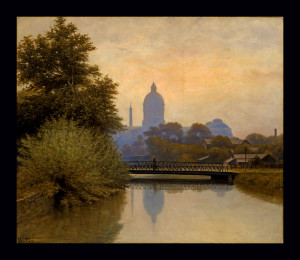 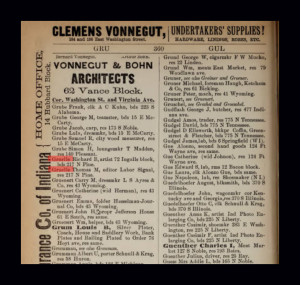 Johnny Gruelle must have been heavily influenced by the creative energy of the society of artists into which he was born. He began work as a newspaper cartoonist at the tender age of 19. In 1903, he was named Assistant Illustrator for the Indianapolis (Morning) Star, but his talent as cartoonist would finally be fully recognized in 1910 when he won both first- and second-place in a comic contest sponsored by the New York Herald, prevailing over 1,500 other entries. That big break led to a contract as a weekly contributor to the Herald to produce a cartoon called Mr. Twee Deedle. Despite the success, times were difficult for the family so Gruelle continued to court and complete other work — sometimes finishing several projects a day. 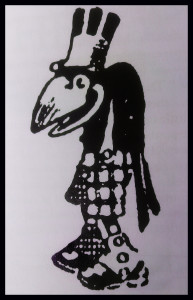 Gruelle’s “Jim Crow” would appear on the Star’s front page offering wisdom of the day, weather forecasts, or a pithy commentary on events. 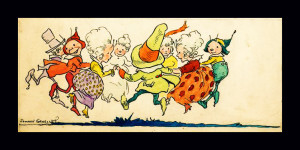 The proto-Raggedy Ann character first appeared in one of Gruelle’s Mr. Twee Deedle cartoons in the New York Herald.

In 1914, Gruelle landed his first book illustration commission: a volume of Grimm’s Fairy Tales. The project was ambitious, requiring 12 full-color illustrations and over 50 pen-and-ink drawings. Undoubtedly, this work paved the way for his future storybooks. A year later, Gruelle drew a face on one of his daughter’s old rag dolls and began penning the doll’s fanciful adventures which he made up for the amusement of the family. As the story goes, Johnny’s daughter, Marcella, was quite taken with this particular homemade toy, as well as the tales her father told. Pulling a James Whitcomb Riley book from the shelf, Gruelle noted the poems, “Raggedy Man” and “Little Orphant Annie,” and chose the doll’s name based on those titles. That same year, he applied for a patent for the doll’s design. 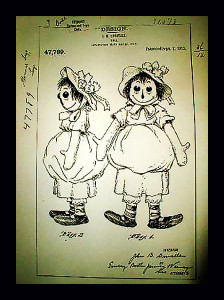 Cartoonist, illustrator, toy creator and now… author, Gruelle finally sold a volume of the Raggedy Ann stories to the P.F. Volland Publishing Company in 1918. In a fit of true marketing inspiration, the company also chose to produce Raggedy Ann dolls for sale along with the books. Two years later they added a new character and doll — Raggedy Andy. A host of other characters would then follow: Beloved Belindy, Pinky Pup, Eddie and Empty Elephant, Bunny Bull and Sunny Bunny, Uncle Clem, Eddie Elf, Pirate Chieftain, Little Brown Bear, Percy the Policeman, and more. 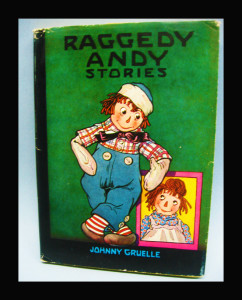 Raggedy Andy Stories: the book was published by the Indianapolis-based Bobs Merrill Company.

By this time, the Gruelle family had moved from Indianapolis, but that would not be their last connection with our city. In 1921, Gruelle received a letter from the Indianapolis-based Bobbs-Merrill Publishing Co.

Gruelle’s relationship with the “Hoosier House,” as Bobs-Merrill was called, was a profitable one. As both author and illustrator, he produced a great many books with the firm, but by far his favorite was his first, Little Orphant Annie, “a peculiarly fitting labor of love.” Gruelle was made free to mix elements from his own beloved Indianapolis childhood with the mastery of his favorite childhood storyteller, James Whitcomb Riley. The result was a book that flew off the shelves. In its first month, Little Orphant Annie sold over 16,000 copies. 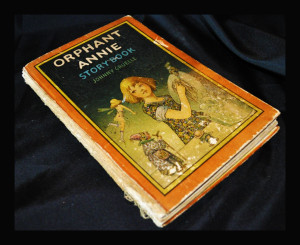 An Indy trifecta! Inspired from childhood by the works of James Whitcomb Riley, Gruelle was finally given the opportunity to illustrate a Riley work published by the Bobs- Merrill Company.

The Great Depression made it difficult for most artists to achieve financial success but it was in this period of his life that Guelle gave full power to his creative energies, also incorporating his musical talent. In 1930, he tried his hand at songwriting in collaboration with music publisher, Charles Miller. Raggedy Ann’s Sunny Songs was in stores by Christmas of that year, complete with Gruelle’s color illustrations. Crooner Frank Luther recorded the songs under the Victor Records label. Raggedy Ann also found her way onto other products, in those years, including clothing, patterns. puzzles and toys. 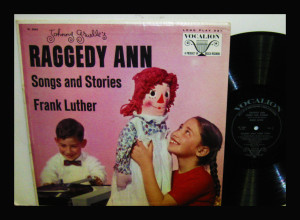 Raggedy Ann found her way onto many beloved childhood toys and products.

Had Gruelle been born into another time, he might not have had to work so hard to promote his little doll and her stories, doing “chalk talks” for crowds on promotional tour across the country. However, Raggedy Ann’s consistent themes of thrift, generosity, loyalty and kindness were particularly well-suited to post-WWI and Depression era audiences. Though considered an introvert, Gruelle had an engaging style in front of audiences and his performances were very well received. 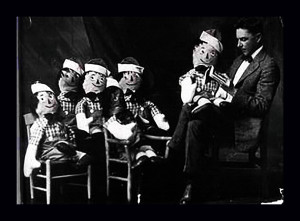 The Gruelles would have been considered financially well-heeled for the times, but Johnny was always plagued with concerns for the future. Those worries, combined with an intense work ethic and battles over another company’s copyright infringements, may have served to exacerbate his longtime heart condition. On the evening of January 9, 1938, Gruelle suddenly collapsed and died of massive heart failure, leaving his family to carry on the Raggedy Ann legacy through the 20th century to today.

The story of Johnny Gruelle and the Raggedy Ann empire is inspiring and filled with quirky texture. If you would like to learn more, we recommend the definitive work, Johnny Gruelle Creator of Raggedy Ann and Andy, by Patricial Hall.

Photo sources: The Library of Congress and Ebay

For the comment box: Did you have a Raggedy doll? What are YOUR favorite items of Indiana Americana? 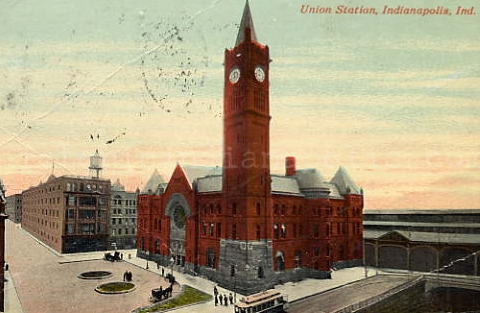