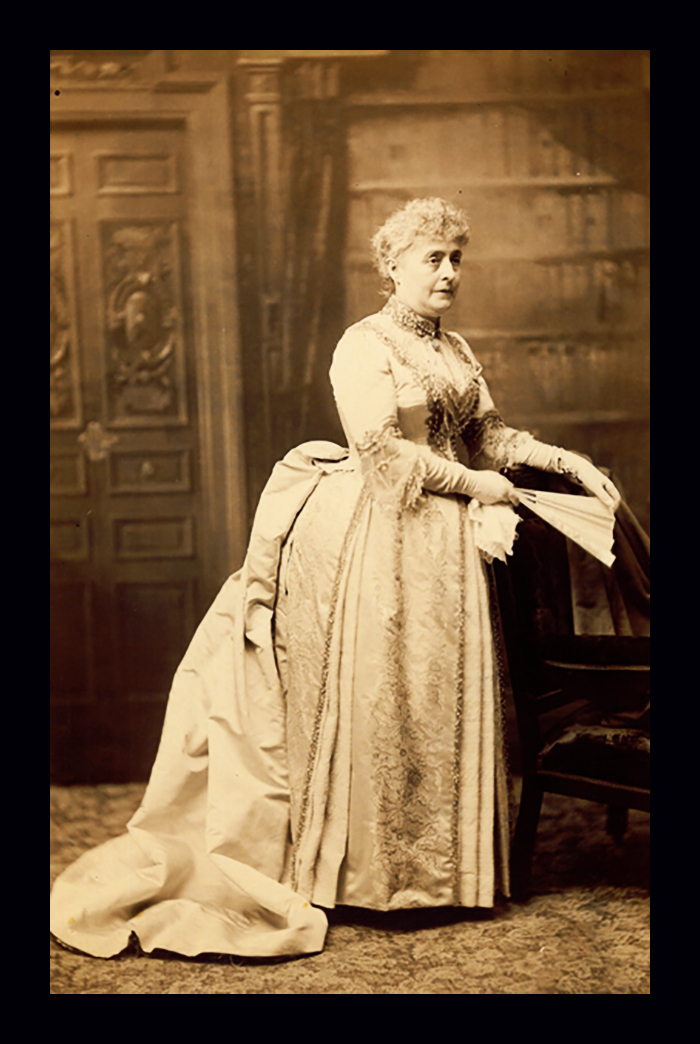 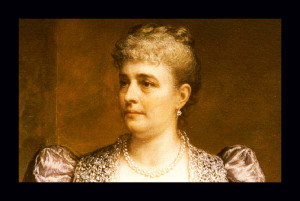 How Do You Not Know This Woman?
Not just “Benjamin Harrison’s wife,” she was accomplished and elegant.

She was a deft leader among women at a time when the idea of women’s rights was just beginning to gain traction.

The National First Ladies’ Library has pronounced her THE most under-rated of all the First Ladies… and yet, she’s hardly a household name. 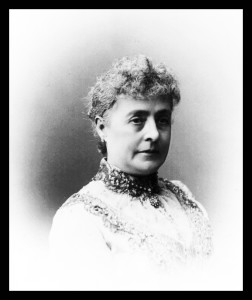 “Since this Society has been organized, and so much thought and reading directed to the early struggle of this country, it has been made plain that much of its success was due to the character of the women of that era. The unselfish part they acted constantly commends itself to our admiration and example. If there is no abatement in this element of success in our ranks I feel sure their daughters can perpetuate a society worthy of the cause and worthy of themselves.” Mrs. Harrison on the Daughters of the American Revolution.

Caroline Lavinia Scott Harrison was born in the sleepy town of Oxford, Ohio in 1832. Her father, John Witherspoon Scott, was a Presbyterian minister and perhaps most providentially, also a teacher at Miami University. Contrary to norms of the day, John Scott provided “Carrie” and her two sisters the same access to education that he granted the boys in the family. In fact, Dr. Scott felt so strongly about this, he broke with the leadership at Miami University over the two hot-button issues of the time: the education of women and abolition. The family then moved to Cincinnati where Dr. Scott opened a school for girls.

Growing up, young Carrie developed a talent and ardent fondness for literature, music, drama and fine arts. She also learned the science of running a household as did most “proper” young ladies of the era. While in Cincinnati, light-hearted Caroline met her future husband at Farmer’s College, where her father taught. For the perpetually-serious Benjamin Harrison, it was reportedly love at first sight (much to John Scott’s chagrin). When John Scott eventually returned his family to Oxford to open the Oxford Female Institute, Benjamin Harrison followed and enrolled at Miami University to complete his studies.

By age 21, Caroline had completed her own education from the Oxford Institute. Upon graduating, she taught music, home economics and painting, in both Ohio and Kentucky. During a year-long assignment in Kentucky, she fell so ill that Benjamin, gravely worried, entreated her to return to Oxford. Soon after her return, they were married. Given the timing, one could speculate that Carrie’s illness was a ruse to reunite the separated lovers — but in truth, a tendency toward respiratory problems would plague Caroline for the rest of her life.

The young couple moved to Indianapolis in 1854 to set up housekeeping. Finances were tight and the transition wasn’t without challenges. As children were added to the family, Caroline struggled — at first because of Benjamin’s long hours at the law office, and then when duty called him away to serve in the Civil War. When Benjamin returned, he was, by all accounts, a changed man and Caroline had become a master at managing the household concerns on her own. 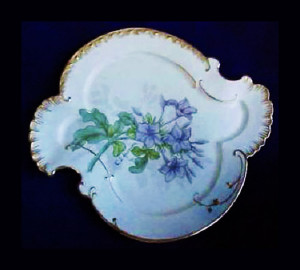 A plate painted by Caroline Scott Harrison. She preferred plants and flowers as subjects for her china pieces. 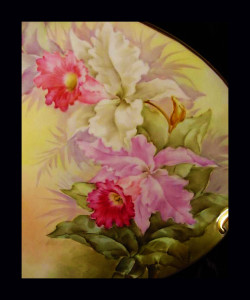 As Benjamin Harrison’s career led him to politics, Caroline expanded her purview to include the community. She generously gave her time to church, civic organizations and her art — notably bringing a young, German painter named Paul Putzki to Indianapolis. He taught Caroline, and the members of her ladies’ groups, the art of china painting. The Harrison family house, built in 1874 on North Delaware Street, became a center of community activity. Another of Mrs. Harrison’s chief interests was the Indianapolis Orphans’ Asylum.  She was a governing member for over 31 years, attending meetings regularly and taking her turn on monthly visits.

Benjamin’s election to the Senate in 1880 took Caroline to the nation’s Capitol, but a period of ill health quickly brought her back home to Indianapolis to recuperate. Despite her occasional bouts of frail health and the busy civic schedule she set, Caroline had always been an asset to her husband’s political aspirations. Her natural grace and open manner offset her husband’s more reserved persona. She often spoke to members of the press on behalf of the family. Benjamin Harrison was elected to the presidency in November 1888–though by electoral vote, not popular vote. 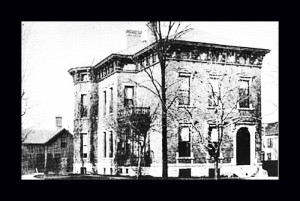 The Harrison household on North Delaware Street as it looked in the 1880s. 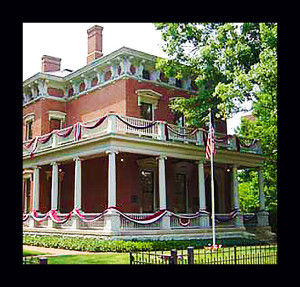 The Benjamin Harrison Home as it looks today, a museum which holds several displays dedicated to Caroline Scott Harrison’s work.

In her first days as First Lady, Caroline was horrified at the crude condition of the White House. She went immediately to work, cleaning out all the rooms, including the kitchen, which she eventually had modernized. She oversaw installation of electricity throughout the building, and drew up plans to enlarge the structure by adding an east and west wing. The idea was tabled for years due to funding issues. It was Caroline Harrison who brought the art of china painting to Washington D.C., once again, importing Putzki to teach classes. The First Lady served as a curator, of sorts, organizing the past administrations’ china collections.

In 1890, the newly formed Daughters of the American Revolution (DAR) national civic organization, asked Caroline to become their first President General, which she accepted. Instead of it being an honorary position as she had thought, it became a full-time job–and it suited her well. Her tact, energy and humor, propelled the fledgling civic organization forward. Indiana’s first DAR chapter, located in Indianapolis, is named in her honor. 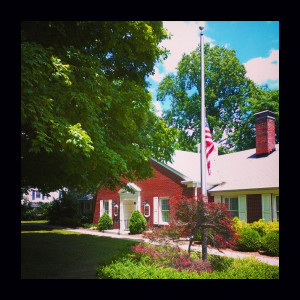 The Caroline Scott Harrison chapter of the Daughters of the American Revolution (DAR) located on North Illinois Street works to continue her legacy and preserve artifacts of her heritage.

In the summer of 1892, Caroline was again overtaken by poor health, and diagnosed with tuberculosis. A summer in the Adirondacks failed to restore her. In September, the President brought her back to the White House, where she lapsed into semi-consciousness. When he asked her if there was anything that could be done for her, she smiled and said, “No, dear.” Caroline died at 6:30 a.m. on October 25, 1892 at the White House. She is buried at Crown Hill Cemetery. 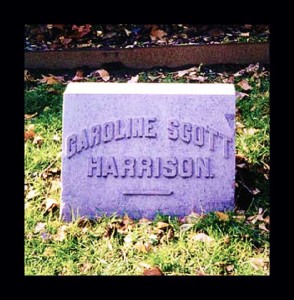 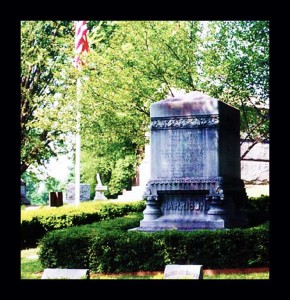 Caroline Scott Harrison’s legacy to the women’s movement is undeniable. Though she was never a parade marching, flag waving “suffragette,” her patience, tact and elegant influence brought about several landmark changes for women through her work in the DAR, her support of the arts and women’s clubs. Also, in her pursuit of certain causes– such as her determined use of only American goods and her demand for the admittance of women as students to John Hopkins Medical School. Her name is kept very much alive by the President Benjamin Harrison home, as well as the DAR Chapter that bears her name. 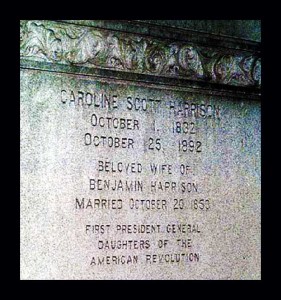 Who is your favorite Unsung Hoosier History Hero? 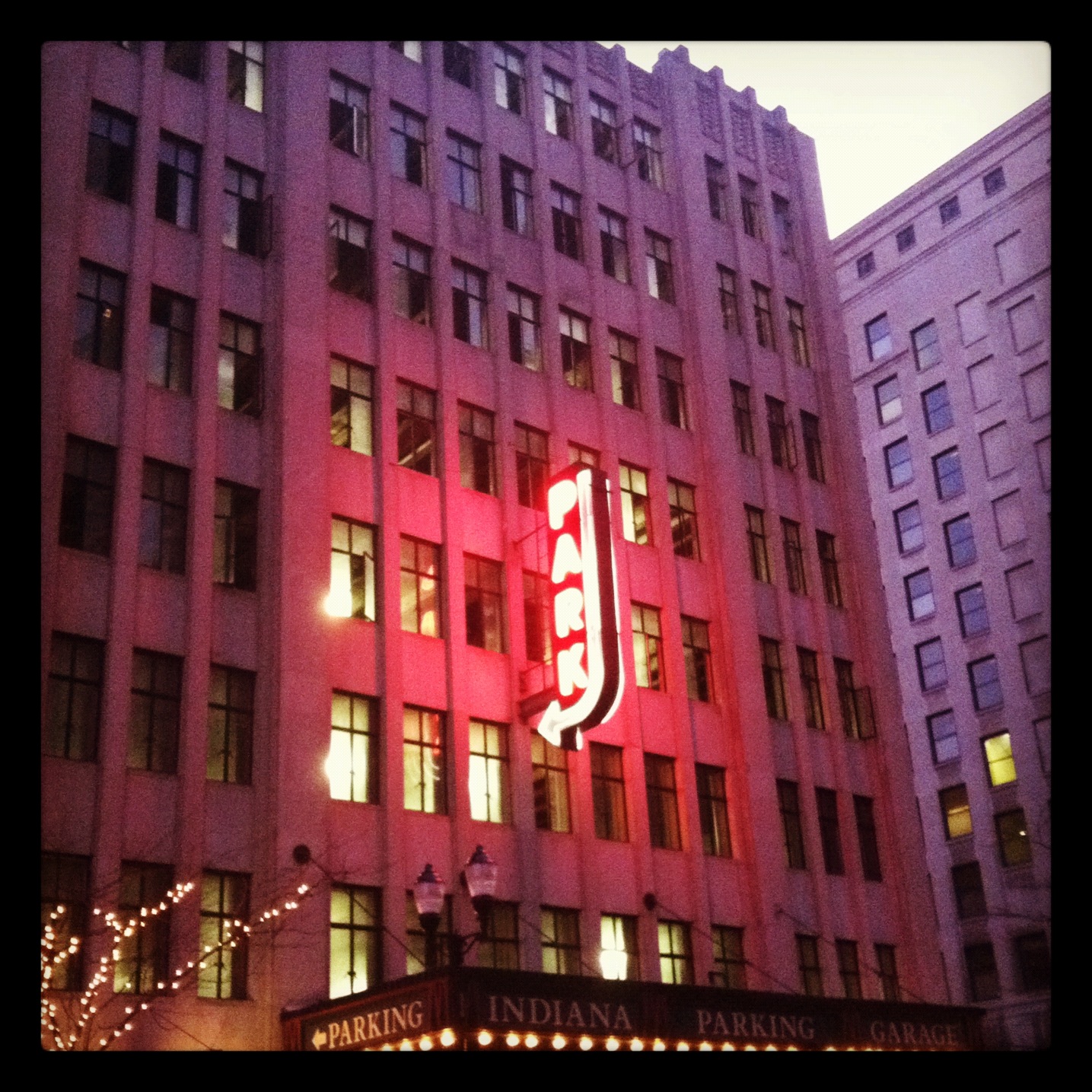