If you peek into newspapers from any decade, it doesn’t take long to find some downright strange human activity going on.  In spite of the often ego-stroking tales we tell ourselves, human behavior, of course, can be as bizarre as that of any other species.  Perhaps we’re even the weirdest of them all.

Animals have often shared a front seat on our rocky ride through life — sometimes literally, as you’ll see in a moment.   Here’s a few stories that came out in the Indianapolis Times and other papers during the last years of Prohibition and the first years of the Great Depression.

In September 1930, on the eve of a big scandal involving the Indianapolis Police Department and some illegal rum, Joseph Clifford, age 11, was throwing grasshoppers — not bootleggers or corrupt cops — into his homemade jail. 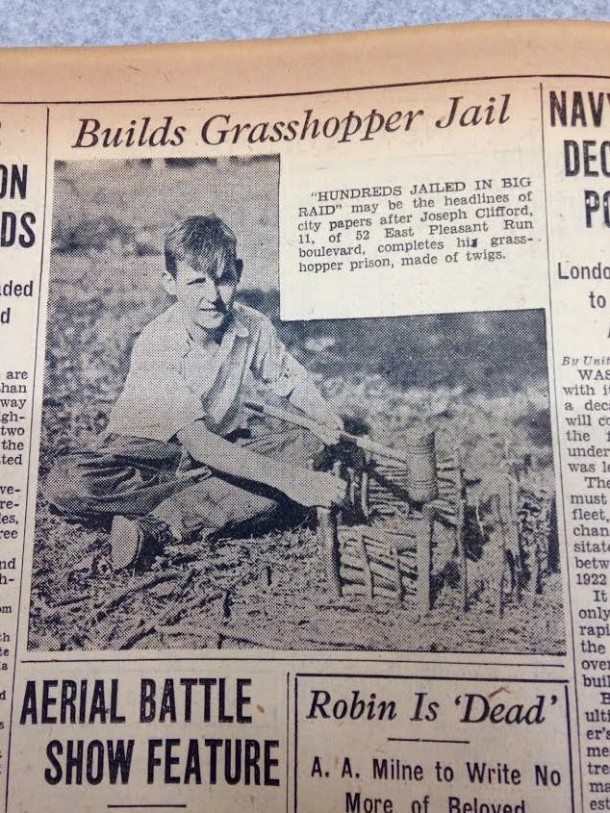 Was one of these grasshopper offenders the one that nearly cost the lives of six people in Indianapolis a year before?  Had he — or she — been angered by a spell behind bars and turned against human beings?  A son bent on revenge? 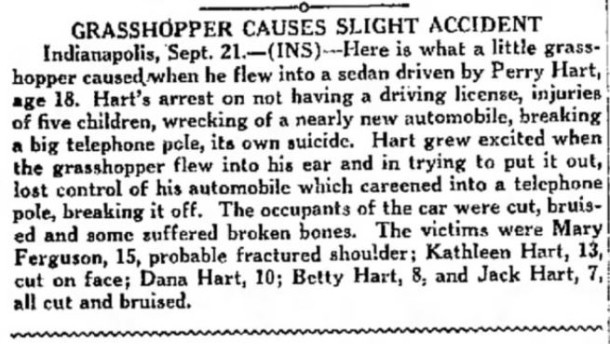 On November 20, 1930, the Times carried a large photo on the front page.  Frank H. Pierpont, an Indianapolis radio salesman, had captured a large albino crow in Posey County down in southwestern Indiana, near the mouth of the Wabash.  It’s not clear if the bird, found “imprisoned in some underbrush,” had gotten caught in a bird trap or if Pierpont had just managed to nab it from the bushes.

The “nonconformist” white crow, still alive, was brought to Indianapolis, where it went on display at the Smith-Hassler-Sturm Co., a sporting goods and bicycle store at 219 Massachusetts Avenue — a spot now occupied by the Regions Bank Building downtown. 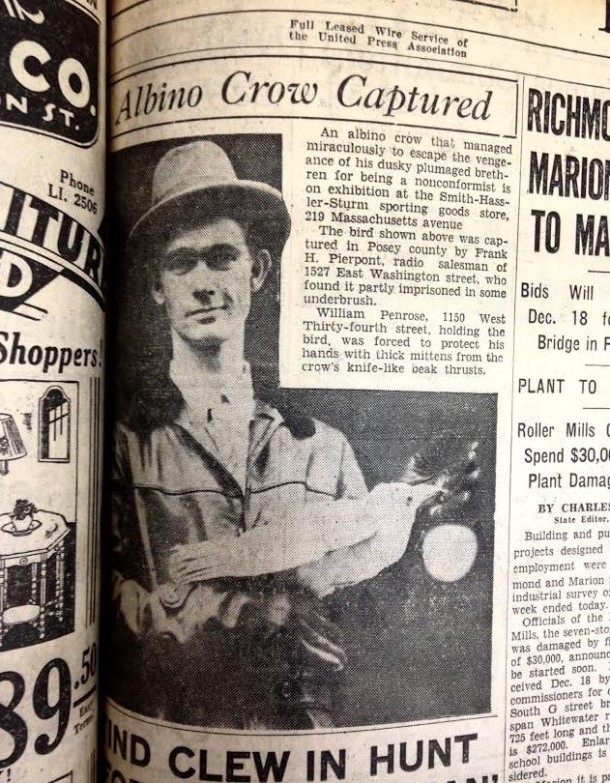 Like that vanished stretch of Mass Ave, another piece of “lost Indianapolis” is Tomlinson Hall.  This huge auditorium, erected in 1886, burned down in 1958, leaving few traces other than the fascinating “city catacombs” situated underneath it.

In 1930, the women of the Indianapolis Cat Club held their annual cat show at Tomlinson Hall — directly above those “cat-a-combs!”  Barely a year after the disastrous October 1929 stock market crash, proceeds from this feline display went to help local families cope with unemployment.  With all due respect to our furred friends, however, we’re glad Franklin Roosevelt came along. . . 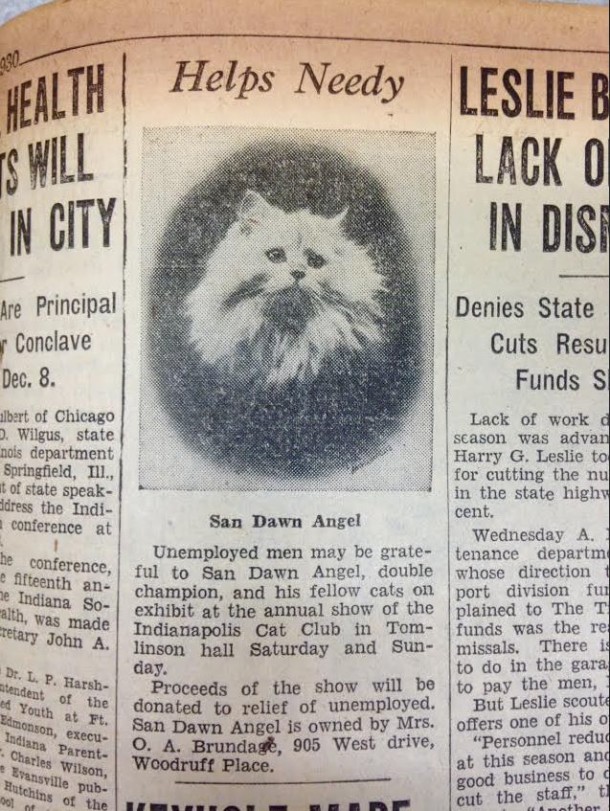 How about Otto Funk the fiddler?  Funk was busy charming snakes in Louisville, Kentucky, but the Indianapolis Times thought his “weird music” newsworthy. 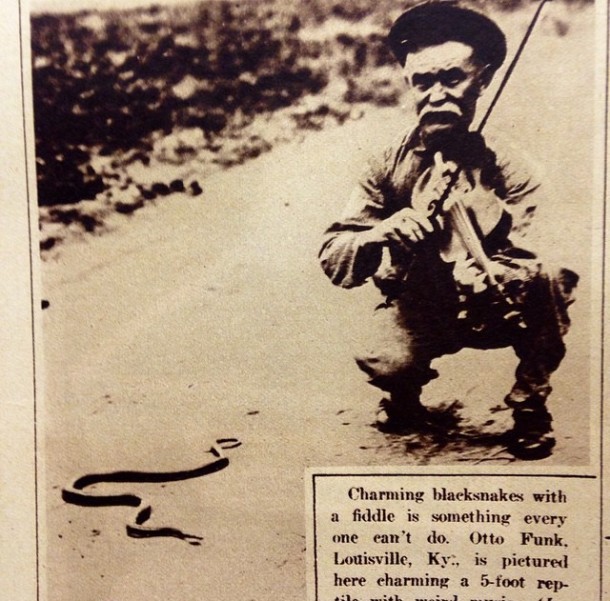 In the mid-1920’s, one of the most famous primates of his day visited Indiana’s capitol city.  This was Joe Mendi.

While humans sparred over whether religion, science, and law could — or should — ever come together, especially in schools, Joe sat at Robinson’s Drugstore sipping on coke, looking humanoid and quite civilized.  Sporting a tuxedo and a dapper bow tie, it’s hard to say whether he took offense to contemporary songs like “You Can’t Make a Monkey Out of Me” and “Monkey Business Down in Tennessee.”  Reporters who came to Dayton joked that the highly intelligent chimp was “living proof of evolution.”

“Old” Joe showed up in Indianapolis at least twice, in 1923 and 1926.  The latter visit was part of a fundraiser for Riley Children’s Hospital. Welcome to the party, Joe. 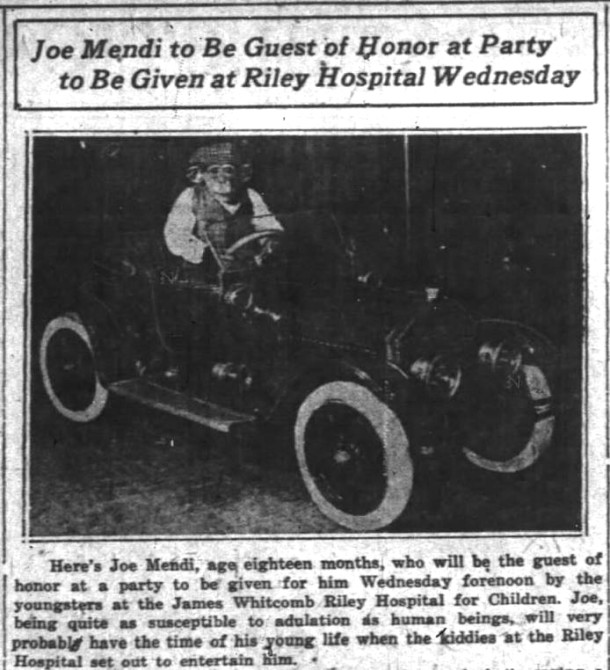 Joe Mendi “the First,” of Monkey Trial fame, died at the home of his owner, Lew Backenstoe, in Columbus, Ohio, in July 1930.  Backenstoe was reported to have rejected an offer of $35,000 for the chimpanzee, a huge sum of money during the Depression.  It’s indicative of his value that Joe was insured for $100,000.  While the traveling chimp was clearly talented in the arts of capitalism, he brought joy to many American children at a time when families were thrown into poverty by the circus tricks and shenanigans of Wall Street.

Joe’s successor on the esteemed throne of chimpanzee-dom — which had no parliament to contend with, quipped an Indianapolis journalist — was Joe Mendi II.  “Young” Joe #2 paid a visit of his own to Indy.  Advertised to have been “Old” Joe’s son, he showed up at Toy Town, the children’s department of William H. Block & Co., Indiana’s second largest retailer, in late November 1930.  (Built in 1911 at 50 North Illinois Street, the huge former department store has been turned into apartments.)

Joe Mendi II continued to tour the U.S. until Backenstoe went to jail for larceny.  The famous chimpanzee entertainer died in 1934 at the Detroit Zoo — but not before he learned how to drive a car and change a tire.  Joe’s “manly” automobile-repair skills even entertained audiences in Europe.  As homo sapiens like Hitler and Mussolini were busy casting doubt on the intelligence of our own species, an Italian film (or at least one with Italian subtitles) featured Joe’s expertise with a roadster.  The film came out the year of his death in Michigan. 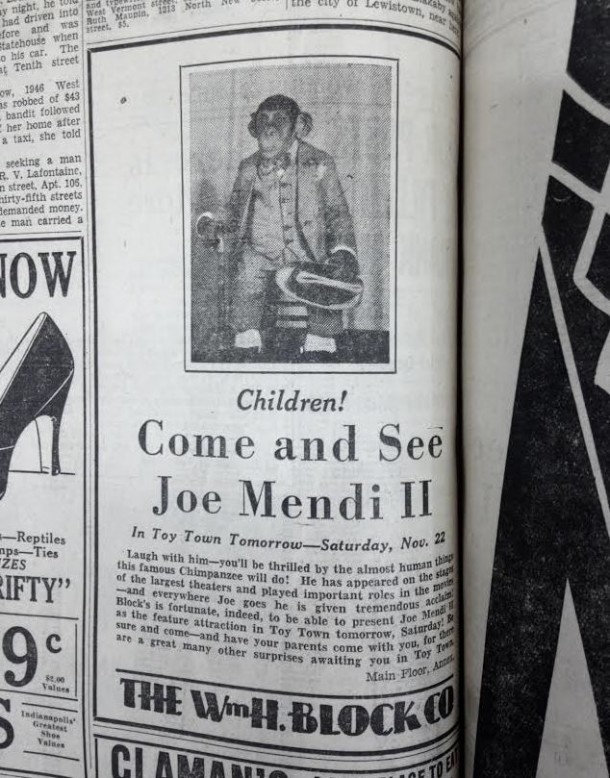 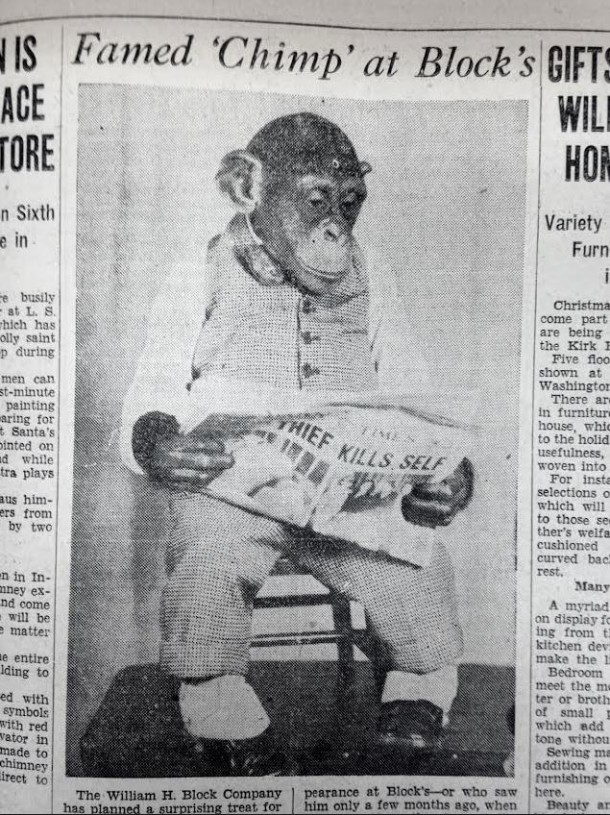 As for thieves, Joe Mendi had reason to take heed: 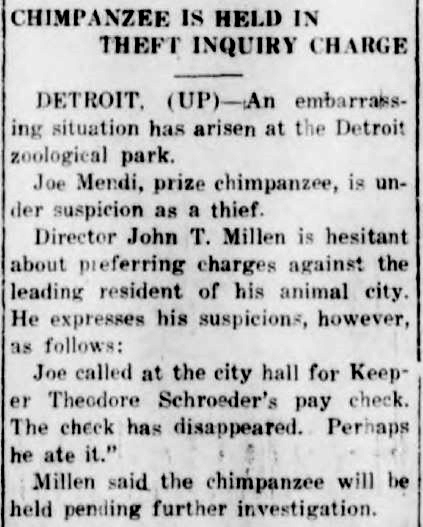 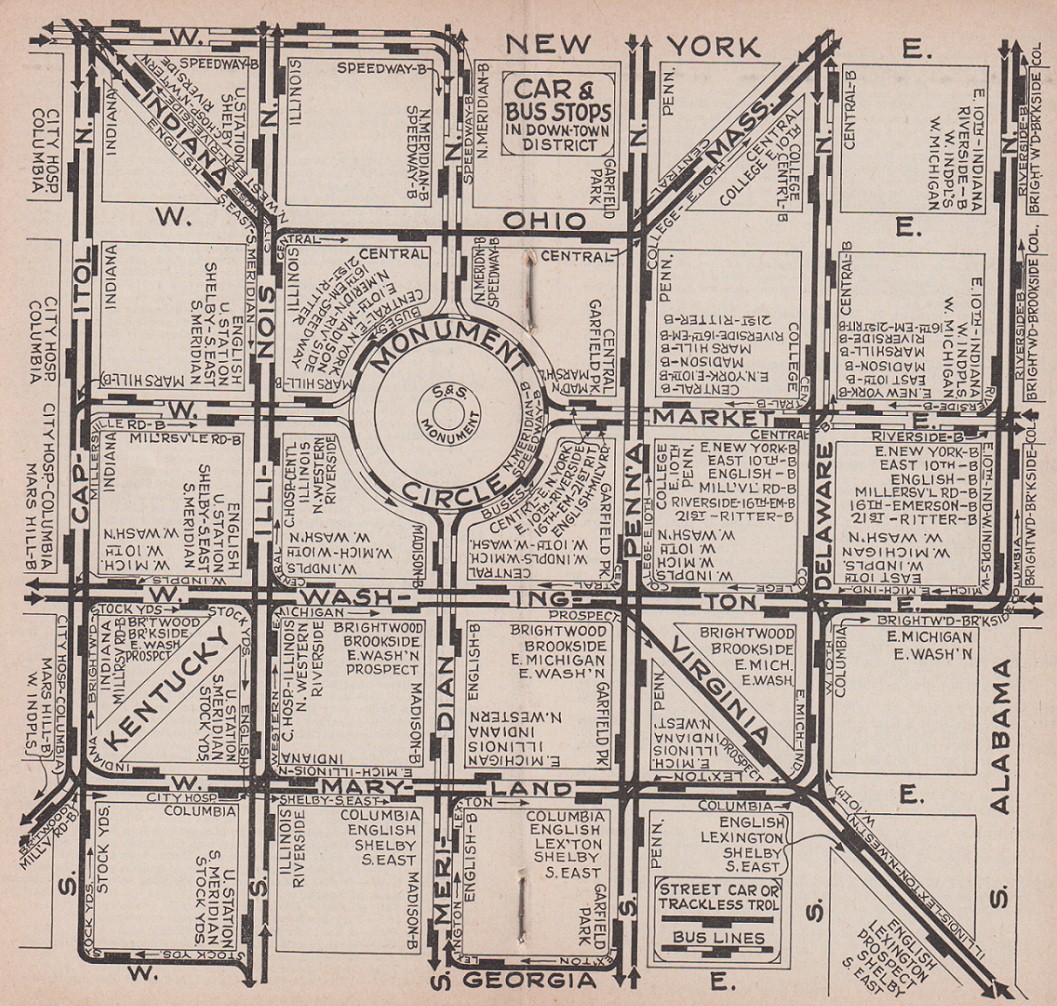