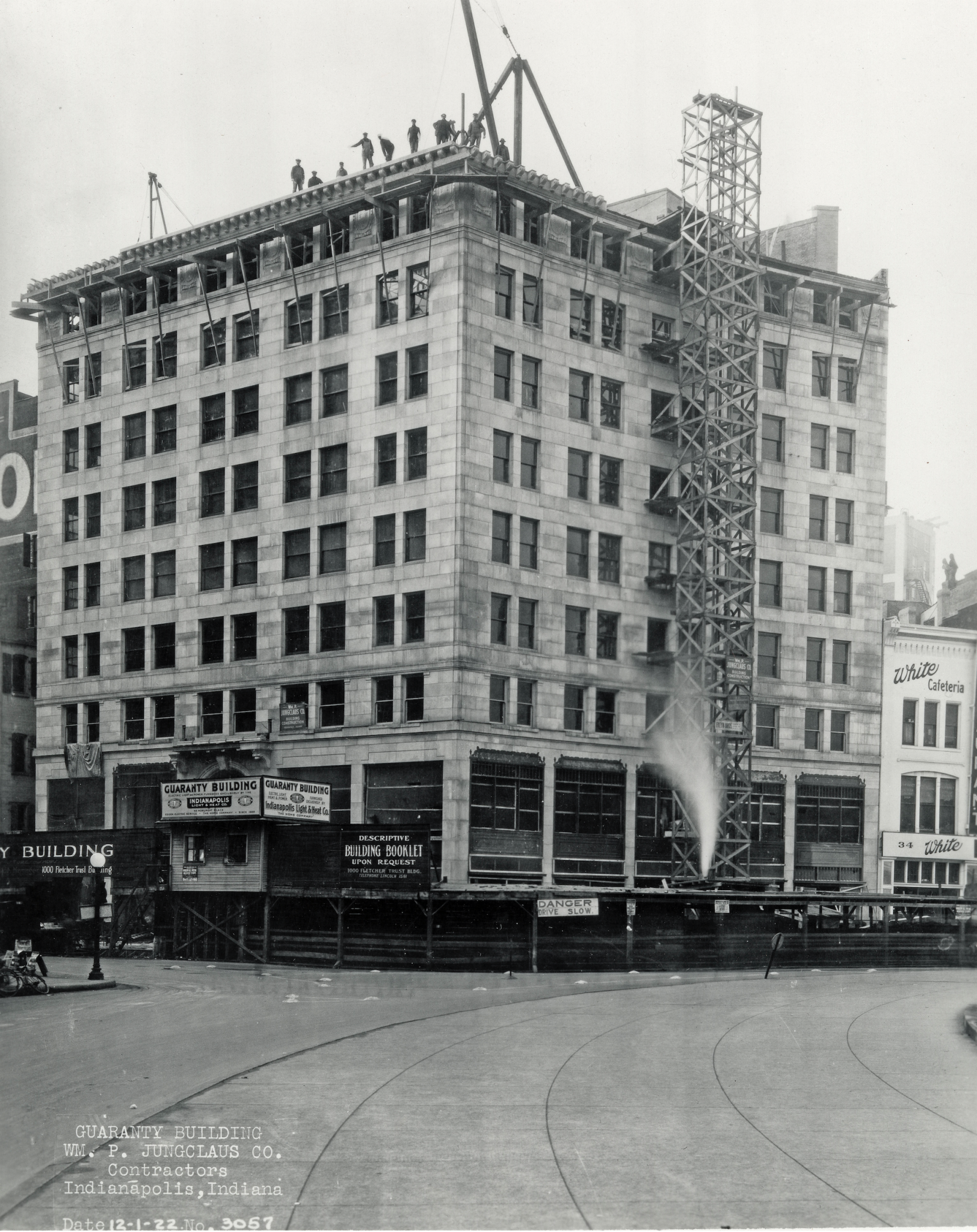 “The great fire of Chicago—the earthquake of San Francisco—gave both of these cities the opportunity needed for long deferred development and growth. Indianapolis does not wait for fires, earthquakes or calamities.  Every new development in recent years has been built upon the man-made ruins of something not as good.”  Those are the spirited, if not subjective, first words of an Indianapolis News tribute to the “Builders of Greater Indianapolis” in 1922.

The editorial urged readers to appreciate the present Indianapolis by remembering the old buildings that stood where new and magnificent structures now rose out of the ground. One case in point was real estate in the southwest quadrant of Monument Circle:  “The seven-story Guaranty Building will be a fitting companion to the Soldiers’ and Sailors’ Monument, to supplant the old, out-of-date Waverly Building.” 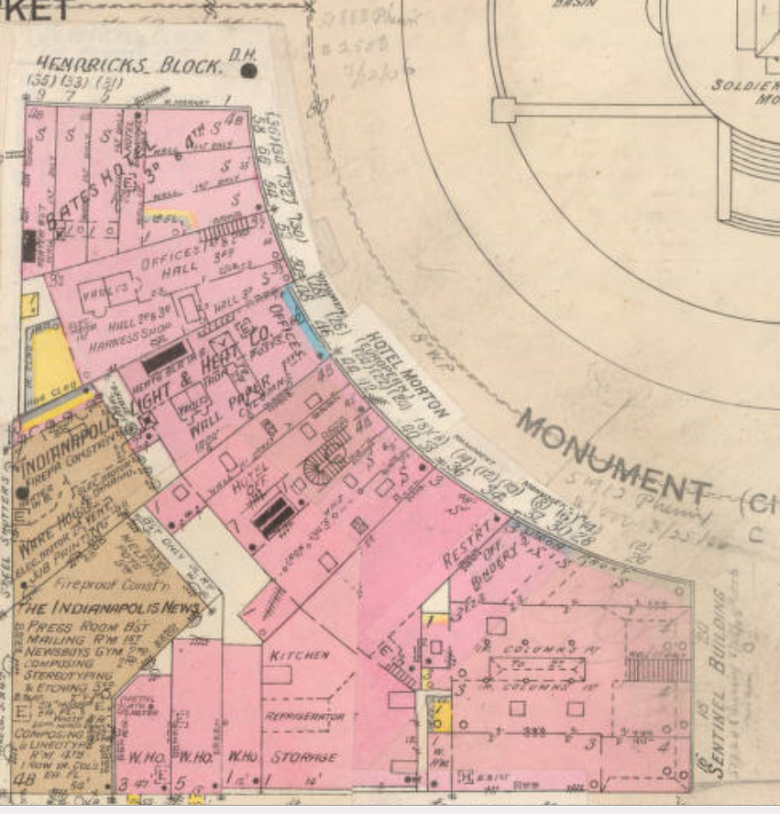 Site of the future Guaranty Building in the southwest quadrant of Monument Circle, as it appeared in 1898. Wesley Methodist Chapel stood at this corner until Richard J. Bright, owner of the old Indiana Sentinel newspaper, bought it and built an addition to it in the late 1860’s. Beginning in about 1895, the old Sentinel Building was known more officially as the Waverly Block. Image: Indianapolis Sanborn Map, 1898, IUPUI Digital Collections

Actually, by the time the Guaranty Building was completed in 1923, it was nine stories tall, not seven, and stood 132 feet high, still safely under the new 150-foot limit established to keep buildings on the Circle from overshadowing the Indiana Soldiers’ and Sailors’ Monument. The extra floors added $120,000 to the original $860,000 price tag. Other changes to the plans included having the exterior of the building finished in gray/brown limestone instead of white terra cotta and upgrading the lobby and the wainscoting in the upper halls with Italian marble.  There would be “four large store rooms fronting on Meridian Street, one store room with an entrance on the Circle and a main entrance on Meridian Street leading to four high-speed elevators and a stairway.” 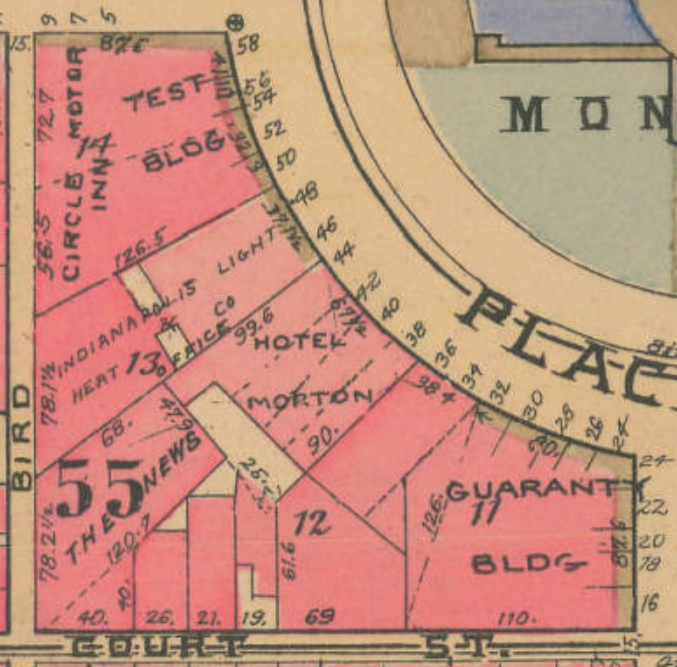 The demand for new office space was robust in 1923; seventy percent of the Guaranty building was leased before construction was complete. The Western Union Telegraph Company moved in from its old location across Meridian Street to become the building’s largest tenant.   Albert Metzger, president of the Guaranty Building Corporation, building owner, said life insurance companies and other financial institutions would fill much of the rest of the space, but a check of the 1924 R.L. Polk City Directory suggests a wide range of business interests among the first wave of occupants:  barber, Emil A. Emminger;  Grand Gripper Shoe Company; Delaware Lackawanna & Western Railroad; Durham Realty; and the offices of Dodge Brothers Motor Vehicles. 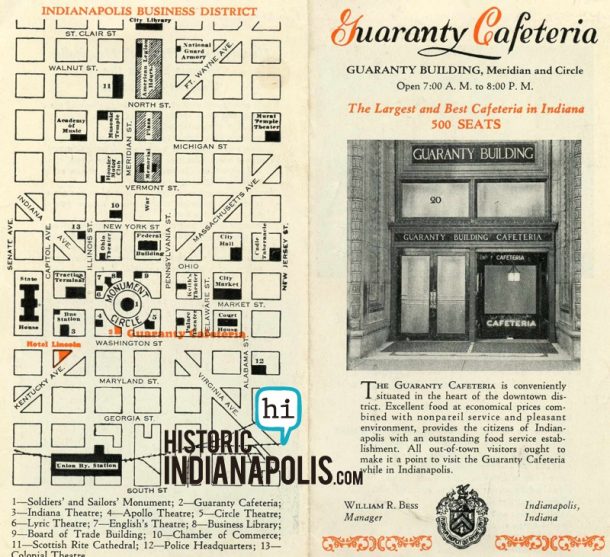 The most popular new tenant resided in the basement. The Guaranty cafeteria opened in May of 1923, offering seating for 500 customers and wide “appeal to both those in urgent haste and those who have leisure for dining.”  After an early run as one of the leading restaurants in Indianapolis, the cafeteria was acquired by V. E. Neal, president of the Neal restaurant chain of Ohio.  Neal, whose career in the restaurant business started in Indianapolis in 1906, also operated a 1,300-acre farm in Miami County, Ohio, and his creamery supplied the newly named Neal’s Guaranty Cafeteria with the finest in dairy products. 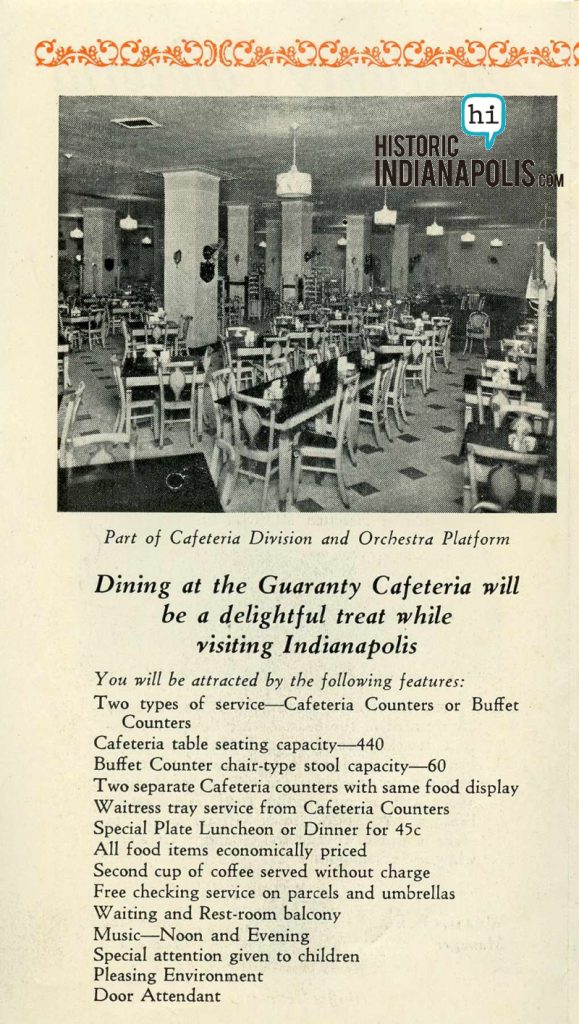 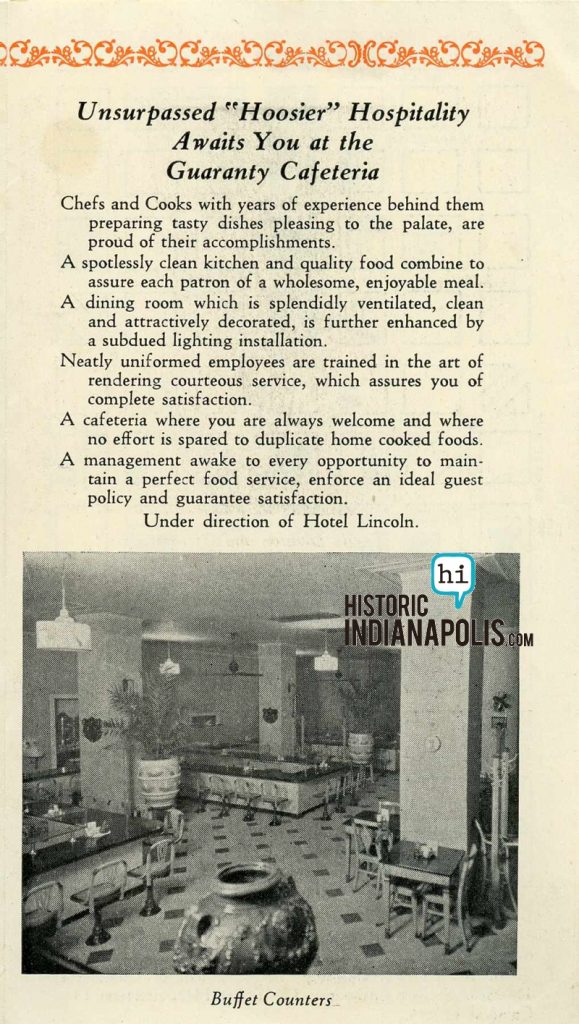 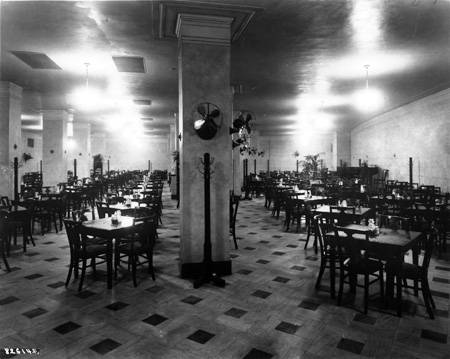 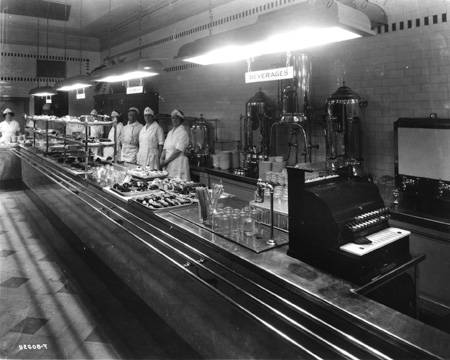 A print advertisement for the Guaranty Cafeteria in 1954.

Like other downtown office space, the building’s occupancy rate suffered through periods of decline. In 1996, the structure was 85% vacant.  The Guaranty Building went on the auction block that year, just weeks after Emmis Broadcasting announced plans to build new headquarters on the Circle—next door.  Newspaper accounts reported that potential suitors would have to repair or replace heating and other mechanical systems, and handle minor asbestos problems.  A leasing and sales associate said, “I would have to believe a fair number of potential bidders are considering tearing it down because of structural obsolescence.”  Some suggested the 73-year-old Renaissance Revival structure would best be “demolished to make way for new office space to join the sparkling glass-and-steel structure planned for the Emmis site.” 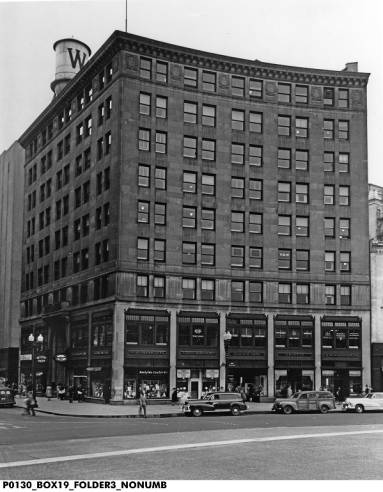 But the site of the Guaranty building did not become a new development “built upon the man-made ruins of something not as good.”  Real estate firm Hokanson Companies, Inc., submitted a winning bid of $700,000 on behalf of its client, and immediately announced that the building would not be demolished. Ten years later, after a complete basement to rooftop renovation, the Guaranty building rebounded to a 97% occupancy rate, with e-mail marketing company ExactTarget as its largest tenant. 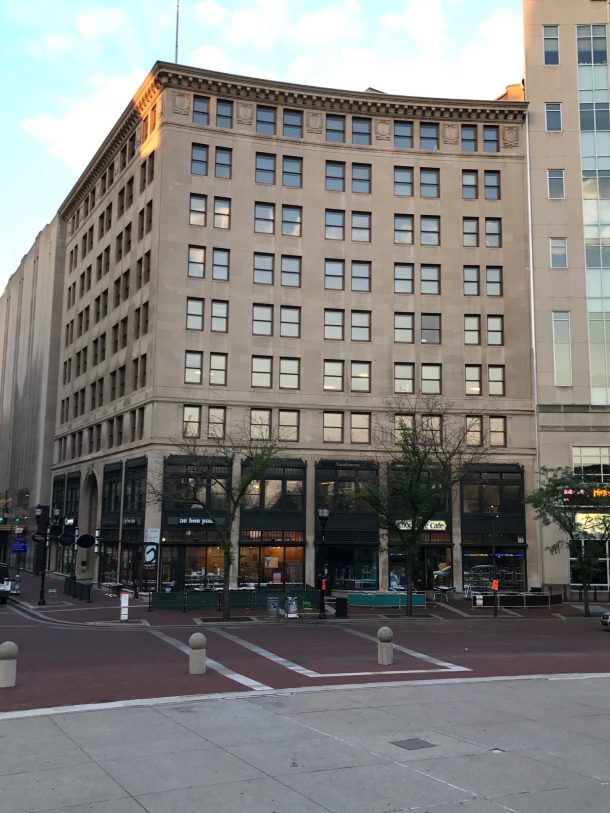 The southwest quadrant of the Circle where it meets Meridian, August 2017. (Image: Tiffany Benedict Browne)

Fortunes for the Guaranty Building changed in 2013 when tech giant Salesforce.com purchased ExactTarget for $2.5 billion and began moving operations out of the Guaranty building and into the nearby Chase Tower– since renamed Salesforce Tower. According to a recent edition of the Indianapolis Business Journal, the rapidly expanding Salesforce.com expects to add 800 workers by 2021 and eventually occupy eleven floors of the 48-story building. Meanwhile, there is plenty of space to fill in the Guaranty Building. 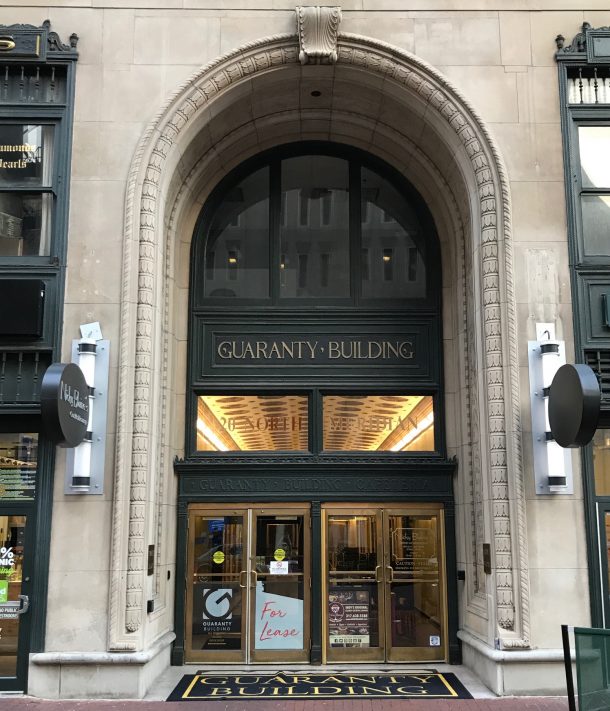 The market for office space is improving in downtown Indianapolis, so there’s reason to believe the occupancy rate in the Guaranty Building will rise again, too. The building looks great, but the names on the lobby directory will continue to change. That’s the Circle of office life in Indy.