Who doesn’t love learning about a home’s past and its former inhabitants. Usually the journey starts with someone wanting an “original” photograph of their house as it was when it was new. And that can be a tall order. Some mistakenly think there is some repository of old photos at the Historical Society or library where they may ask some nice clerk to retrieve the file on 123 Memory Lane. Sorry to say, that isn’t the case. Finding old photos and information on houses can take years of diligent searching. Why years?

There are so many variables to consider when seeking vintage photos of a house. The person or family that lived in the home may have been well known, or may not have been known at all–that is simply one of the many things that must be uncovered. Were there many children in the family?–if so, you should have a greater chance of tracking down a living relative. Did the family live in the home for a long period of time or just briefly? Was the family name really common? (Jones, Smith, Clark–all needles in a haystack.) Or is the name highly unusual? The exact years someone lived in a home can greatly impact the ability to track down information. In Indianapolis, home address numbers had three major alterations–1898 and 1911 being pivotal years, and there is no blanket formula that may be used to decode those former house numbers; it must be done on an individual basis.
For this article, we explored the story behind 1928 North Delaware since the home is going to be featured in this weekend’s Herron-Morton Place Home Tour, this is the perfect time and way to share a few findings. 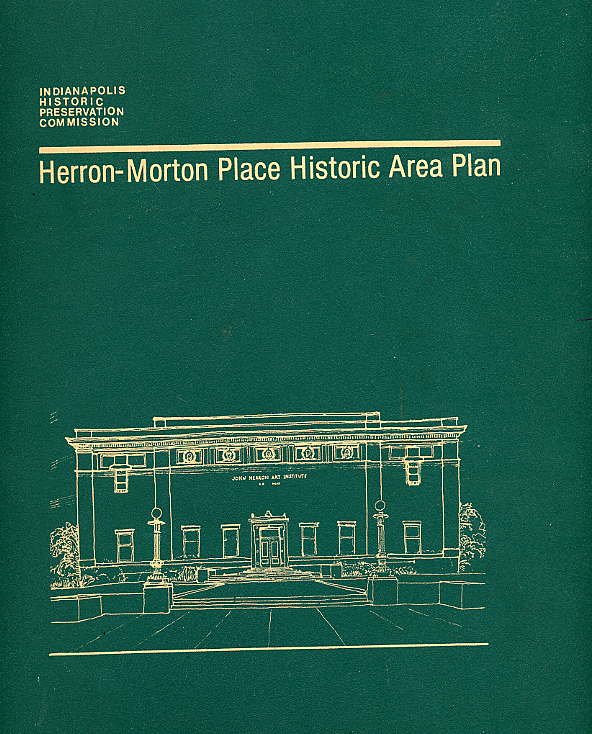 For those lucky individuals in an IHPC designated historic district, the Conservation Plan book is the best starting point for home research! Unless you have the original abstract, you can’t get a much better start. 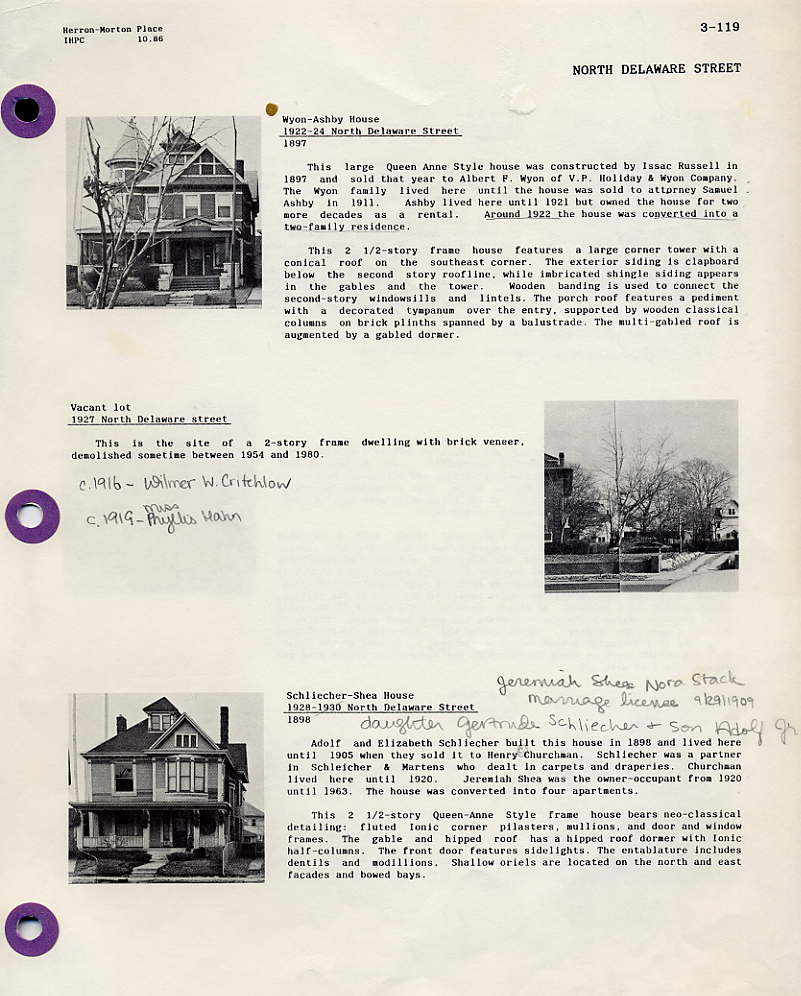 Herron-Morton Place, is fortunate to be one of the city’s historic neighborhoods, and consequently has a “Conservation Plan” adopted by the Indianapolis Historic Preservation Commission (IHPC, for short). Locals call this reference guide “The Green Book,” because the plan is housed in a green 3 ring binder. Many Herron-Morton Place property owners keep a copy of this binder at home– to reference some of the area’s history, architecture and individual comments about each property within the neighborhood. My copy is well loved, pages repaired, notes scribbled next to some of the houses and other random symbols sprinkled throughout. Though the information presented is correct for the most part, upon closer inspection, some entries may be off on a few small details. Considering the massive undertaking it must have been to create entries on every standing property, the book is an impressive collection of work, and again, a great starting point for someone in search of information on their home’s history.

For 1928 North Delaware, the entry says about the former residents: “Adolf and Elizabeth Schleicher built this house in 1898 and lived here until 1905 when they sold it to Henry Churchman. Schleicher was a partner in Schleicher & Martens who dealt in carpets and draperies. Churchman lived here until 1920. Jeremiah Shea was the owner-occupant from 1920 until 1963.” The first family thankfully had an unusual name. Ancestry.com is always an early step, especially once there is a name to research. The census documents are excellent ways to verify age, occupation and other relations. Finding relevant dates and recreating a a family tree would be nearly impossible without this genealogical site and know-how. Subsequently taking names and dates to the clipping files, card catalogs or newspaper microfilm reels at the library are the next steps.

In this instance, a fascinating, if macabre, obituary revealed why Adolf Schleicher, Sr. was not listed on the 1900 census.

Obituary of Adolf Schleicher, Sr. (the rendering of his likeness evokes Robert Sean Leonard for me, but as usual, I digress)

With a name like this, and the resources of ancestry.com, tracking down a living relative was not difficult. I found a lovely lady willing to share some information and photos–some of which will be on display in the house during the home tour.

As usual, I seek–and found–a personal connection in this story. It turns out that two Schleicher brothers, Adolf Jr. and his brother, Ben moved from Indiana to Southern California–near where I was born and raised. When my parents and I would drive from our home to that of my grandparents in Orange County, we would always pass this amazing piece of architecture that captured my imagination every time we passed it. In my teen years, it would become an outlet mall called The Citadel. And still the architecture captivated. The place is mesmerizing to most people who see it. How shocking for me to learn after moving across the country that the very person responsible for building the place had lived on the same block as I now do 100 years prior. 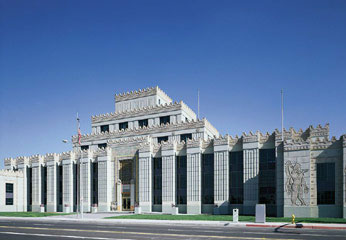 One of my earliest architectural loves…

There are always connections to be found, lurking in the shadows or dusty stacks, just awaiting discovery.

The Churchman Family was even easier to find. Upon meeting a new member of a social club to which I belong with the last name Churchman, I had to ask if he was familiar with Henry C. Churchman? Just slightly, as Henry C. was this gentleman’s great-grandfather. Indeed, trite as sounds, it is a small world. Turns out, Henry Churchman is the son of Francis M. Churchman who owned a 40-acre piece of property in Beech Grove with a grand home, designed by Dietrich Bohlen, called “Hillside.” I often wondered when on the south side, if there was a connection between Churchman Avenue and the Churchmans who formerly lived on Delaware. Indeed it is the same family. Turns out Churchman Avenue was the original roadway connecting Indianapolis to Beech Grove.

Henry C. Churchman who owned 1928 North Delaware, had a law degree, yet he did not practice law. He instead, went to work for the Waverly Company– after falling in love with the newly introduced electric car. He went on to start the Indiana Tire and Battery Company at 1007 North Meridian and even obtained the distributorship of the Milburn electric car. One of his deepest loves was writing–especially poetry–and he created many an ode to the beloved auto.

My Choice by H. C. Churchman
I have driv some mighty wild ones,
And I’ve held them on the pike,
I have rid a pesky camel,
And I’ve traveled on a bike,
I have sped in an express train,
And I’ve rumbled on a freight,
I’ve meandered interurban,
And I’ve swung upon a gate,
I have went on a toboggin,
And I’ve skated on the ice,
On a skeery roller coaster,
I have ventured once or twice.
Sailing on the ocean
Is a common stunt with m e,
I have floated in a biplane,
And I’ve tumbled from a tree,
But of all the modes of travel;
And I’ve tried most all there are,
The pleasantest and grandest
Is my little motor car.

When the rain is pouring down,
And You want to go uptown,
Do not sit and pout and frown–
Buy a car.

Do not mope around all day,
While the world is bright and gay–
There’s a freer,–better way–
Buy a car.

Do you love the field and wood,
Where the air is sweet and good,–
You could have them if you would–
Buy a car.

Is the day too short to do
All the things confronting you,
Are the moments all too few–
Buy a car.

Are you sad and sick at heart,
And aweary of the smart
Of life’s superficial art–
Buy a car.

Would you have the world more dear?
Cast aside the sigh and tear–
Find a gleam of Heaven here–
Buy a car.

Thru the Winter, Spring and Fall,
Thru the Summer’s cheery call–
You will find a charm in all–
Buy a car.
-H. C. Churchman
(with thanks to The Churchman family for allowing me to post these!)

Turns out, Mr. Churchman also died in a freaky accident. In a garage at Michigan & Dorman, he had not realized his car had already been raised on a lift (he had been gathering some of his writings and poetry from the floor of the passenger seat, so goes the family lore) and opened his car door, stepping out and falling on his head. Odd that two owners of the home should have bizarre falls causing their deaths… 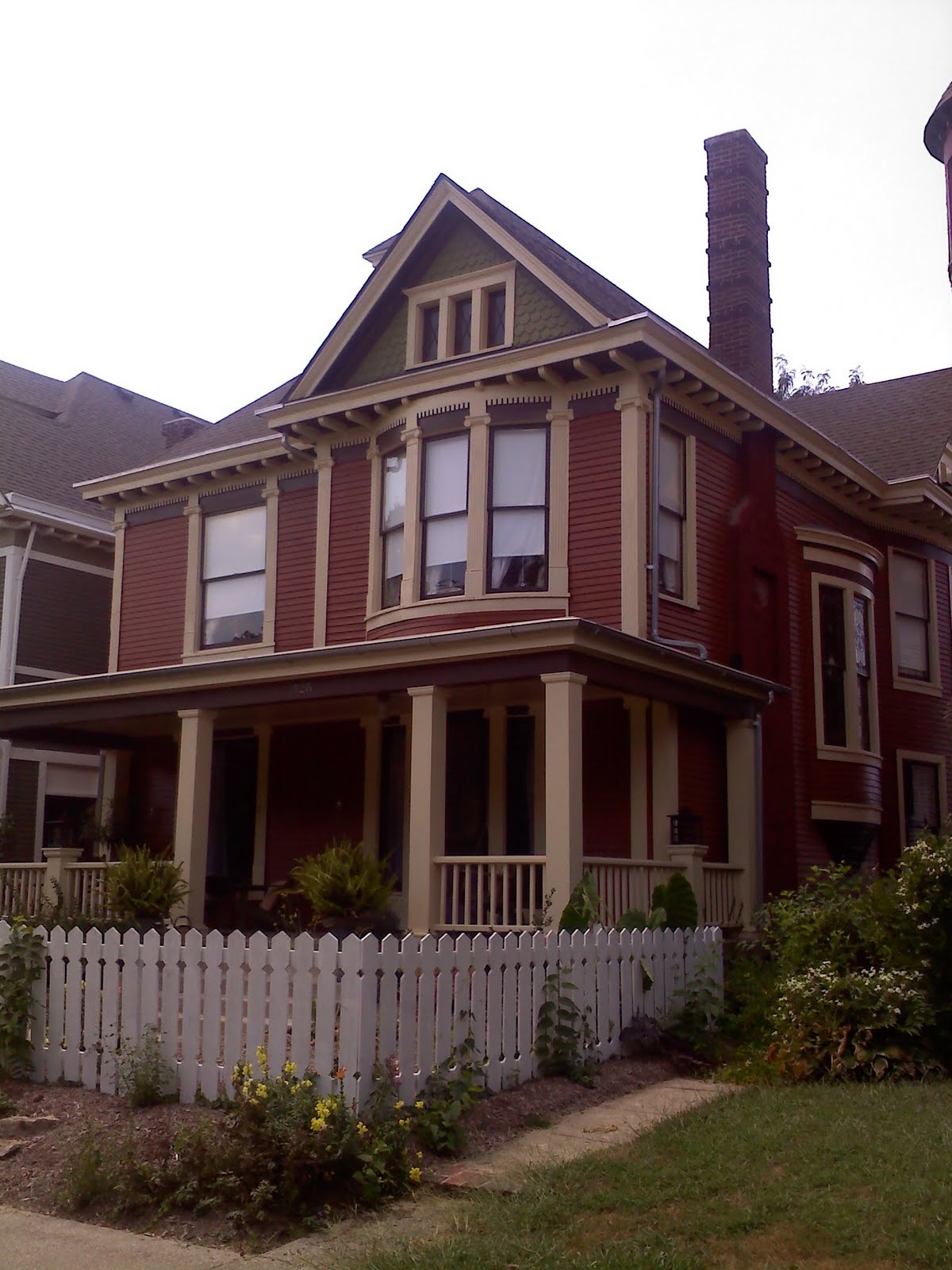